Chris Duliere’s goal on a corner kick gave the Raptors the victory. 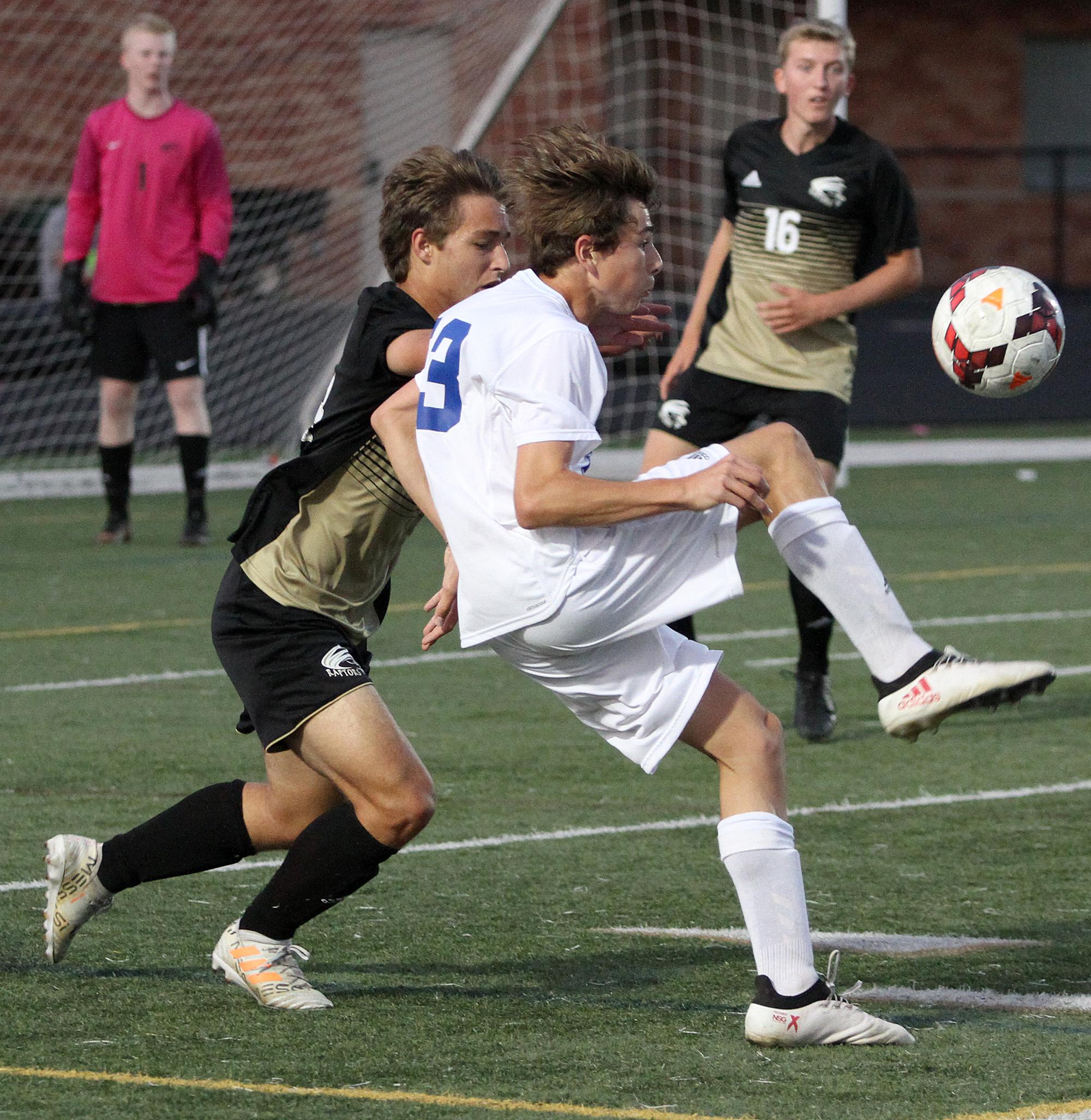 Early in the second half of Tuesday’s match between Woodbury and East Ridge, a hockey-like scrum broke out in front of the Royals’ net. All that could be seen was a crowd of players from both sides. Then, suddenly, the ball rolled slowly into the back of the net.

The Raptor crowd and players celebrated, but it wasn’t clear who scored the goal. That didn’t matter, however. What mattered was East Ridge had gone ahead 1-0. 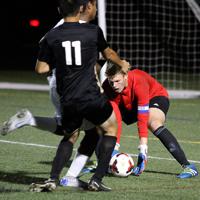 Both sides of the crosstown rivalry admitted how much of a battle it is each time the teams meet. That was evident when the Raptors had to scratch and claw their way to a 2-1 win on home turf.

Prior to the chaotic opening goal, the rivals played to a scoreless draw in the first half. This was all according to plan for East Ridge, ranked No. 7 in the Class 2A coaches’ poll.

The wind had been howling to the open end of the Raptors’ stadium. Since they were attacking into the wind in the first half, East Ridge chose to play conservatively.

“Our strategy was to come out and play 0-0 soccer,” said Raptors coach Anthony Bidwell. “We knew that the wind would change how we attacked. We knew we could score.”

With the wind at their backs, the Raptors (4-0-2) scored in the 52nd minute, when the scrum broke out. The key to the play came when the Woodbury goalkeeper fell down, which left the net open.

“When you get into a scrum like that, players end up scoring quite a bit,” Bidwell said. “I had to ask who put it in. We were plucking away. It was a physical game.”

Woodbury (1-2-2) couldn’t capitalize on the wind advantage in the first half but came out much more aggressive in the second half. The Royals evened the game 1-1 as sophomore attacker Devin Padelford hit the right side of the net, sneaking his shot past East Ridge goalie Nick Wagner.

“We wanted to get the ball and settle in,” said Woodbury coach Joe Quintavalle. “Our possession hadn’t been as good as I liked. But I thought we came out with intensity tonight, and put ourselves in position to get at least a tie, or even beat them.”

As the minutes ticked down in the second half, a draw seemed likely but then the action picked up. The Royals had a long offensive possession that led to a shot going off the post. Shortly after that, East Ridge got a corner kick.

The kick went directly to junior defender Chris Duliere, who headed it in all in one motion to give East Ridge a 2-1 lead.

“I just went front post,” Duliere said. “I just wanted to do what the coaches told me to do.”

The Raptors had failed to convert on prior corner kicks. But that one turned out exactly how East Ridge wanted it to.

“That was a terrific ball into the box,” Bidwell said. “We knew the goalie was going to be aggressive after the ball. The ball came right to (Duliere).”

The win was revenge of sorts for the Raptors. Their last loss was in last year’s Class 2A, Section 4 playoffs, when they fell to Woodbury 1-0.

In the spring, East Ridge graduated all-state midfielder Grant Tostenrud and attacker Nate Casas. With that frontline talent departed, Bidwell and the Raptors knew this season would be about the entire group, which showed Tuesday night.

“Our motto is scoring by committee,” Bidwell said. “Everybody needs to score. We don’t have that one player to key on.” 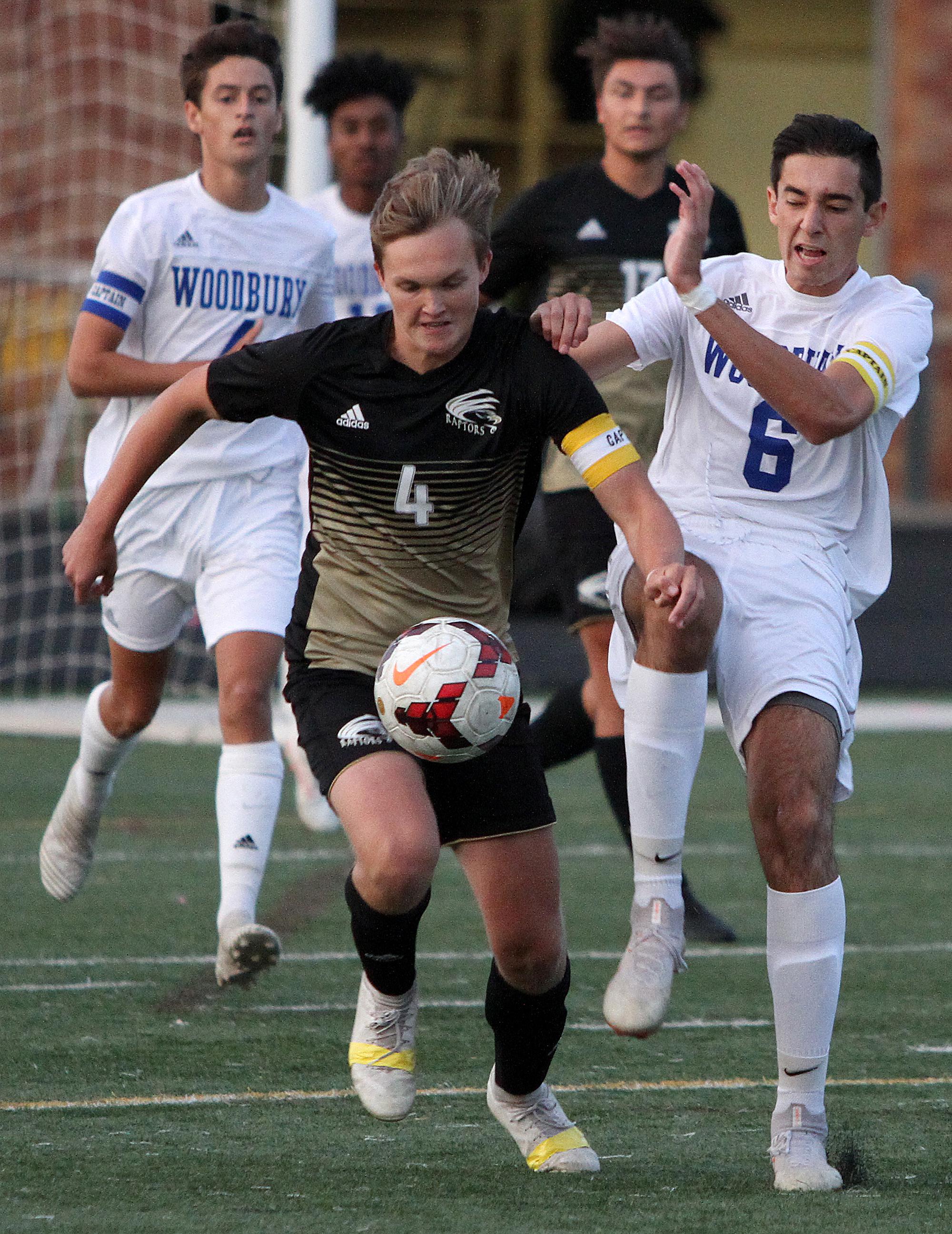 With the score tied 1-1 late in the second half of Tuesday’s game between East Ridge and Woodbury, Raptors junior defender Chris Duliere headed in a corner kick to give East Ridge a 2-1 home victory over its Suburban East Conference and crosstown rival.

The Raptors and Royals played a quiet first half, combining for six shots on net in the opening 40 minutes.

The Raptors, ranked No. 7 in the Class 2A coaches’ poll, broke the deadlock in the 52nd minute when junior midfield Cullen Featherstone rolled one in while in the midst of a crowd of players from both teams.

Woodbury (1-2-2) responded in the 61st minute as sophomore attacker Devin Padelford kicked one in past Raptor sophomore goalkeeper Nick Wagner to tie the game at 1.

Wagner came up big for East Ridge (4-0-2) in the second half, stopping five shots to help hold off a furious Woodbury rally in the final minutes to finish with seven saves. Royals senior goalie Scott Sampson also dazzled with 10 saves in the match. 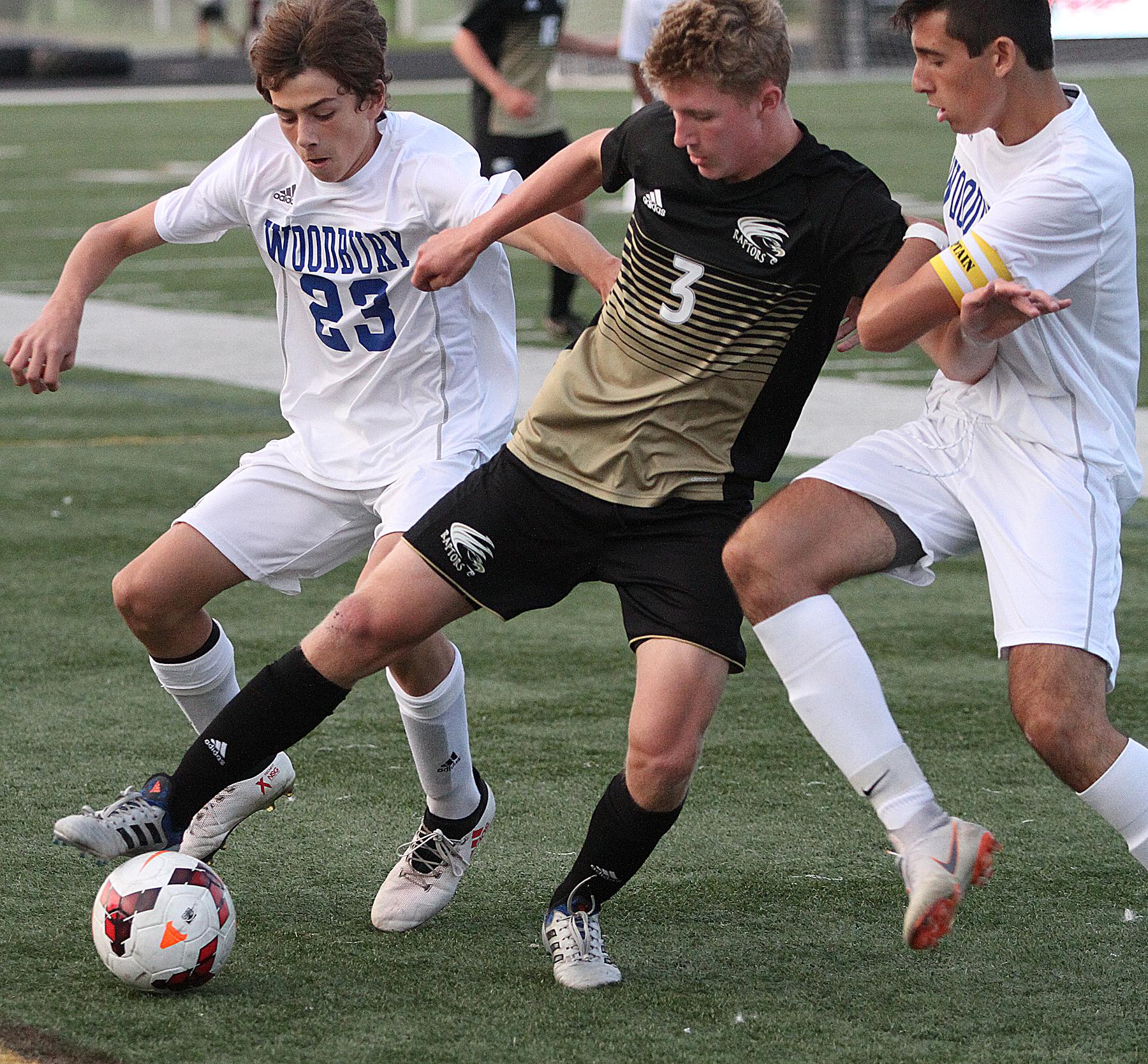 East Ridge junior defender Reese Dodd fights for control of the ball near the sideline with Woodbury's Josh Miller (right) and Devin Padelford in pursuit. Photo by Drew Herron, SportsEngine