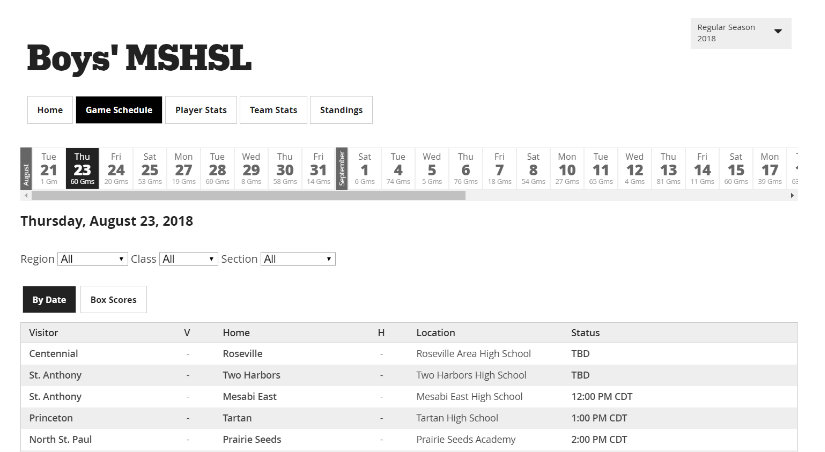 Click the image to view the full 2018 boys' soccer schedule.

The 2018 regular season will begin for boy’s and girl’s soccer on Aug. 23 with 60 boys matches and 56 girls contests scheduled for opening day.

On opening day for boys, Wayzata will travel to the north metro to take on Mounds View. The defending Class 2A state champion Trojans defeated the Mustangs twice last year, including a 4-1 win in the state tournament quarterfinals, which sets up a chance for Mounds View to avenge its tourney loss while starting 2018 in the win column.

Another game to circle on the calendar is Duluth East's home matchup against Forest Lake on Aug. 30. Duluth East just scraped by the Rangers in a penalty shootout in last season’s Class 2A, Section 7 final, leading to the Greyhounds taking third place at state.

After Labor Day, there's a pair of key IMAC and Class 1A, Section 5 matchups to keep an eye on when Blake hosts Breck in Hopkins on Sept. 15, and they'll play a second time at Breck on Sept. 27. Blake, which was ranked No. 1 in Class 1A by the coaches' association at the end of the 2017 regular season, was shocked 2-0 by the Mustangs in a Section 5 semifinal last year, after the Bears finished in third place in the 2016 state tourney.

Class 2A runner-up Stillwater will travel to face Suburban East foe Woodbury on Sept. 20. Woodbury defeated the Ponies 1-0 in the regular season but lost 1-0 against them in last year’s Section 2 final.

On the girls side, there's two opening day matches to keep an eye on. Defending Class 2A champion Eagan will start its season at home against Rochester Lourdes. These teams don't have a history of playing each other, but the Eagles lost just two regular-season games a year ago and made it to the Class 1A quarterfinals, setting up an enticing challenge for both teams.

Another key opening day match will be between Mankato West and Orono. The Scarlets and Spartans drew 1-1 at the start of last season. They were the top two seeded teams in the Class 1A state tourney a year ago.

Two matches in the middle of Sept. stick out as potential thrillers. Maple Grove will head to Centennial for a rematch of last season’s Class 2A, Section 5 final on Sept. 15. The Crimson finished second at state in Class 2A last season, after claiming their section title in a commanding 3-0 win over Centennial.

East Ridge will journey to Mounds View on Sept. 18. Their last encounter was close, with East Ridge earning a spot in the state tournament after claiming a 2-1 victory in the Class 2A, Section 4 final. Both sides will be looking to make a statement in what is a competitive Suburban East Conference.

Click here for the full boys' schedule and here for the girls' schedule to see all the upcoming games this season. You can also use the search box in the top right corner of the page, and select "Team Finder" to look at the schedule for a specific team.

If your team’s schedule isn’t posted or needs updating, send the necessary information to scores@sportsengine.com.