The boys arrived from Haiti two years ago and overcame the language barrier to become two of the state's top soccer players. 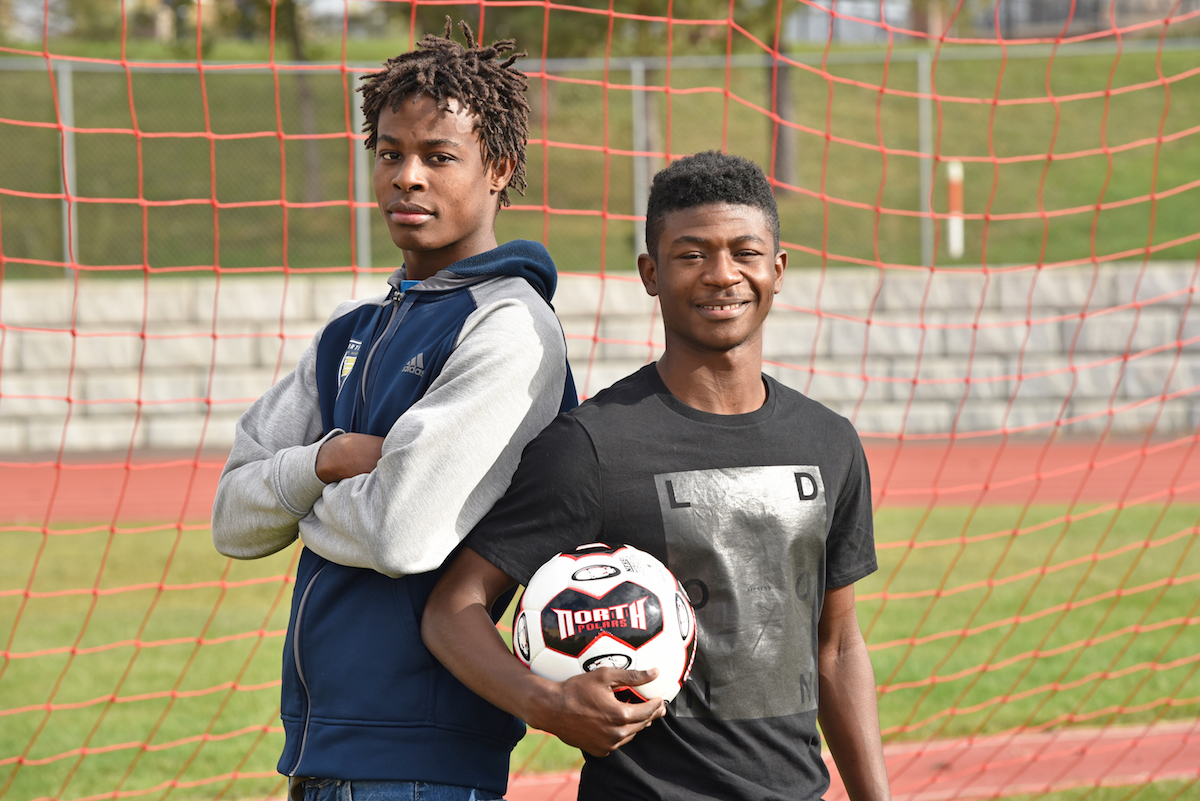 Busquets Jeudi (left) and Ata Claremond burst onto the high school soccer scene this year and have North St. Paul eyeing a return to the Class 2A state tournament. Photo by Kelly McGinley

Ata Claremond couldn’t understand anything the coach was saying.

“He had a blank stare of ‘I don’t know what you are saying, but it is nice to meet you,’” Holm said. 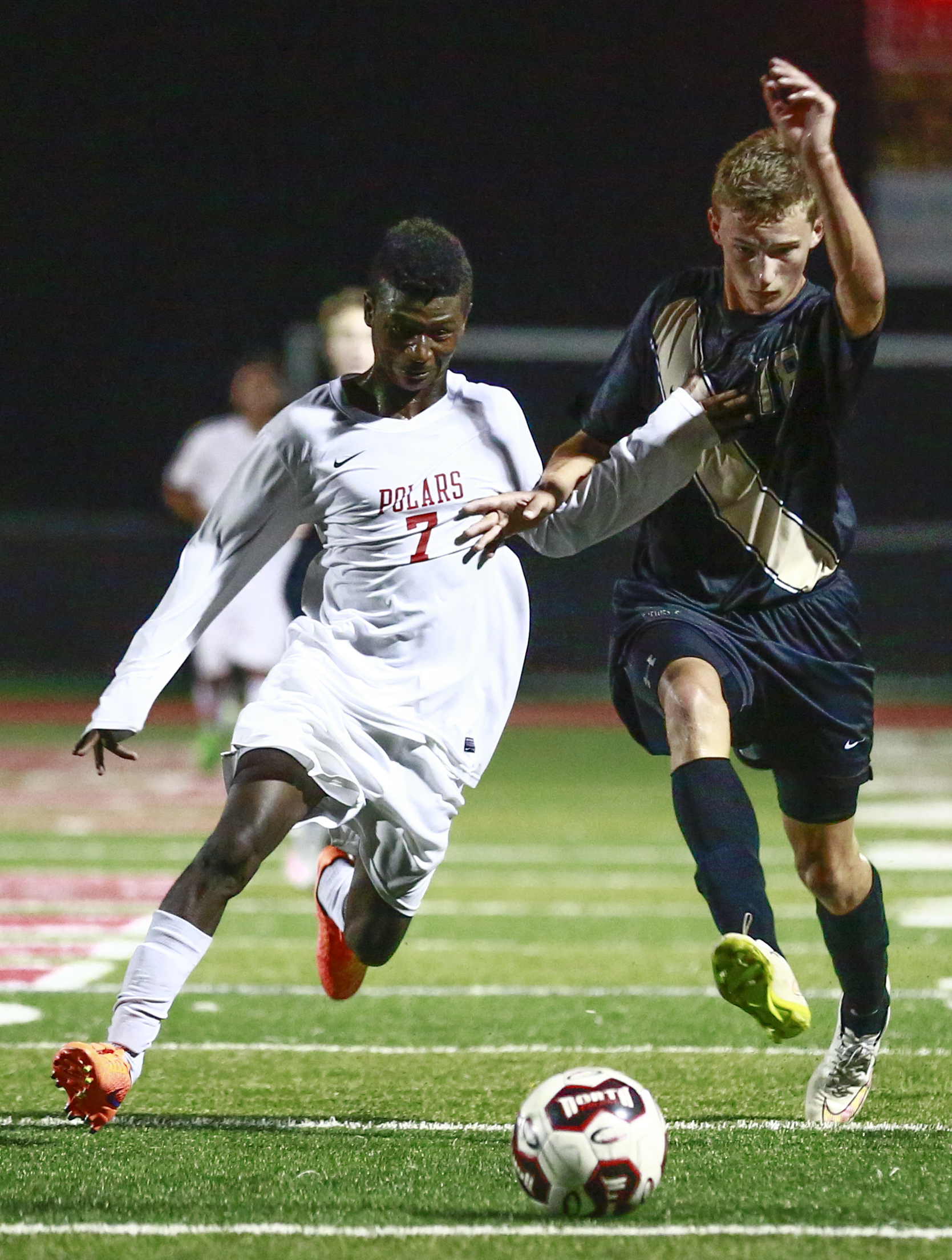 Ata Claremond, who scored 30 goals in the regular season, is known for his speed. One opposing coach described the sophomore as being all-state track fast and a burner. Photo by Chris Juhn

Two years later, Claremond has a better grasp of the English language. So does Busquets Jeudi, a fellow Haitian who was adopted in 2013 by the same family that brought Claremond to North St. Paul.

While their English may have been limited, the boys' soccer talent was immense. The North St. Paul sophomores stormed onto the high school soccer scene this year and have the Polars, who have been ranked No. 1 in Class 2A by the coaches association all season, eyeing their second state title in the last three years.

Claremond is a forward who finished the regular season as Minnesota’s leading scorer with 30 goals while Jeudi, a midfielder, posted a state-best 31 assists playing their first year at the varsity level. 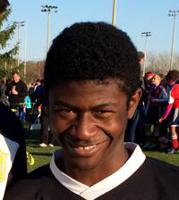 Claremond led the state with 30 goals in the regular season. He already has five in two postseason games.

Claremond scored five goals and Jeudi had four assists in the Class 2A, Section 4 quarterfinals on Oct. 13, leading North St. Paul to a victory over Hastings, and Jeudi notched another assist two days later as the Polars defeated Park of Cottage Grove in the semifinals.

Set to play East Ridge for the section championship on Oct. 21, North St. Paul (16-2-0) will look to Claremond and Jeudi to continue playing at a level that has their coaches and teammates, along with several opponents, marveling at what the pair can do on a soccer field.

Stillwater coach Jake Smothers got a a first-hand look at the boys when the Ponies defeated the Polars 3-2 in a regular-season game on Oct. 3.

Smothers described Claremond as all-state track fast and "a burner" and said Jeudi is "a visionary" with the ball who compliments Claremond’s speed. Together, they create a daunting task for opposing defenses, he added. 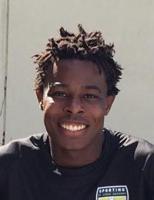 Jeudi finished the regular season leading the state with 31 assists. He tallied five more in the section playoffs.

Several Polars coaches and players watched the duo play club soccer and beamed with excitement when learning that Claremond and Jeudi would be joining the varsity team.

North St. Paul junior captain Robert Anigbogu was one of the first players to get acquainted with the boys, meeting them not long after they moved to the Twin Cities. After playing with the pair on the same club soccer team, Anigbogu knew that Claremond and Jeudi would inject the Polars with plenty of skill and talent.

“It was quite an experience watching them play,” said Anigbogu, who gives the boys rides home from practice every day. “It was different from anything I had ever seen.”

Claremond, Jeudi and Kenlove Solon, a Haitian adopted by another North St. Paul family, each came to the Polars with immense talent, but they needed time to build rapport with the team.

“Since they were new, there was the (feeling of) ‘How do we adjust? How do we play with them?’” Anigbogu said.

"Ata and Busquets connect with each other and it makes them very difficult to defend."

Fortunately, verbal communication wasn’t an issue for the Polars.

Claremond, Jeudi and Solon had been living and going to school in North St. Paul for more than a year before joining the team, giving the trio time to improve their English.

Being comfortable with their ability to communicate allowed Claremond and Jeudi to let their sense of humor shine.

Holm said the boys can deliver one-liners in English and the quips have become their go-to’s whether at practice, during study hall or at team events.

“They’ve both grown and have become pretty funny,” Holm said. 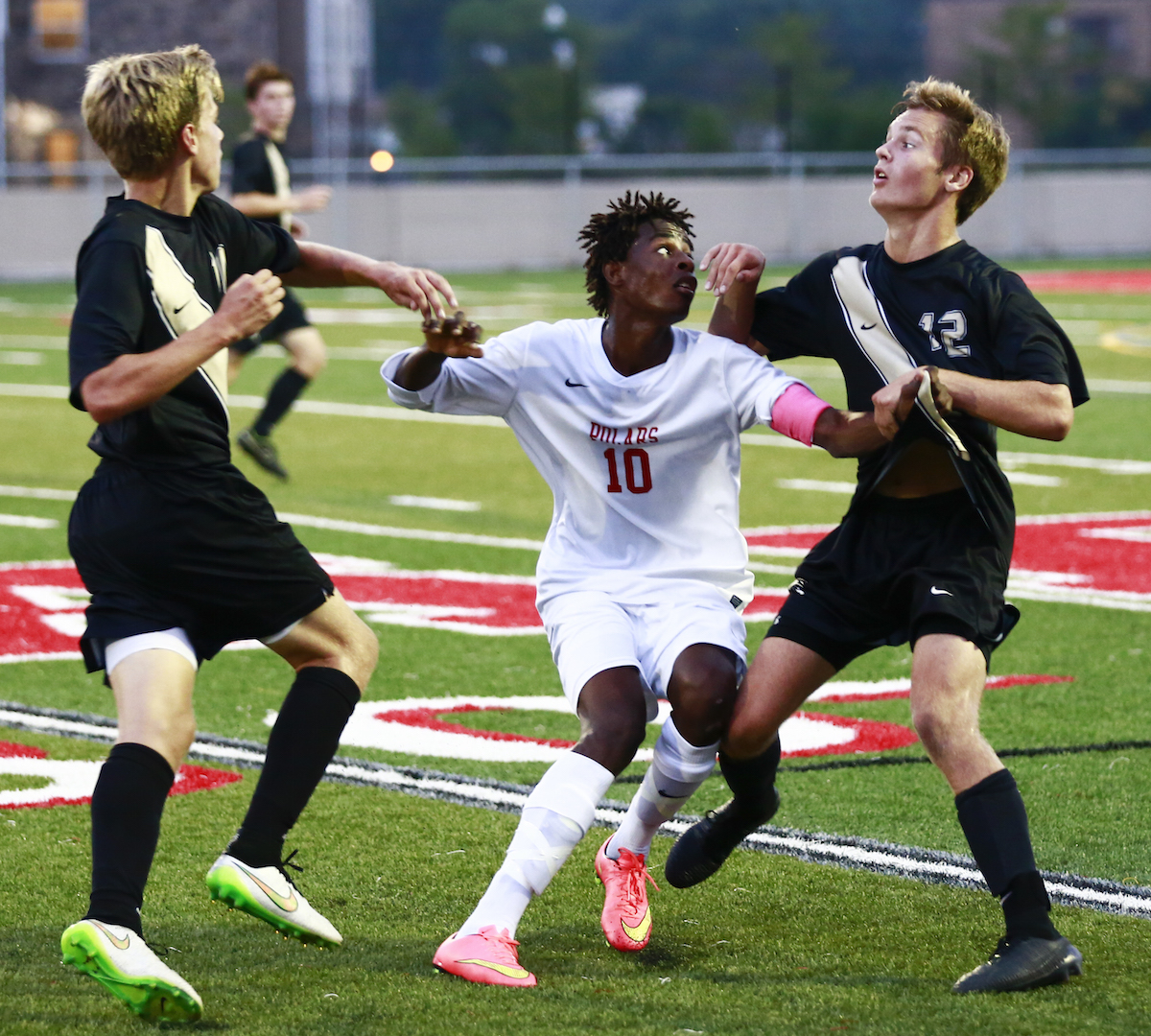 Although they like joking with teammates, Claremond and Jeudi are no laughing matter for opponents.

Despite having just two years together, the duo have an on-field chemistry that shows they have a real understanding of how to play off each other.

“If Ata has the ball, he knows he is supposed to give it to me, and I give it back to him,” Jeudi said.

Smothers said that type of trust makes them more dangerous than many of the state’s well-known and talented twosomes.

“There have been other duos in high school soccer who have excelled, the Oliver twins of North St. Paul and the Gibbons boys of Minneapolis South,” he said. “But they were all similar soccer players. Ata and Busquets are not. They play off of each other really well.”

The Oliver twins helped lead the Polars to the Class 2A state title in 2013, and Claremond and Jeudi hope to bring North St. Paul another title before they graduate.

Claremond, however, said he and Jeudi can’t be the only Polars playing at a high level to accomplish the feat.

“We need to communicate as a team, practice as a team and play hard as a team,” Claremond said.

When Claremond first met Holm, the young Haitian wouldn’t speak because of his limited understanding of the English language. However, Claremond hopes the next time he’s speechless is when he holds the first-place trophy from the Class 2A state tournament.

“It would mean a lot,” Claremond said.