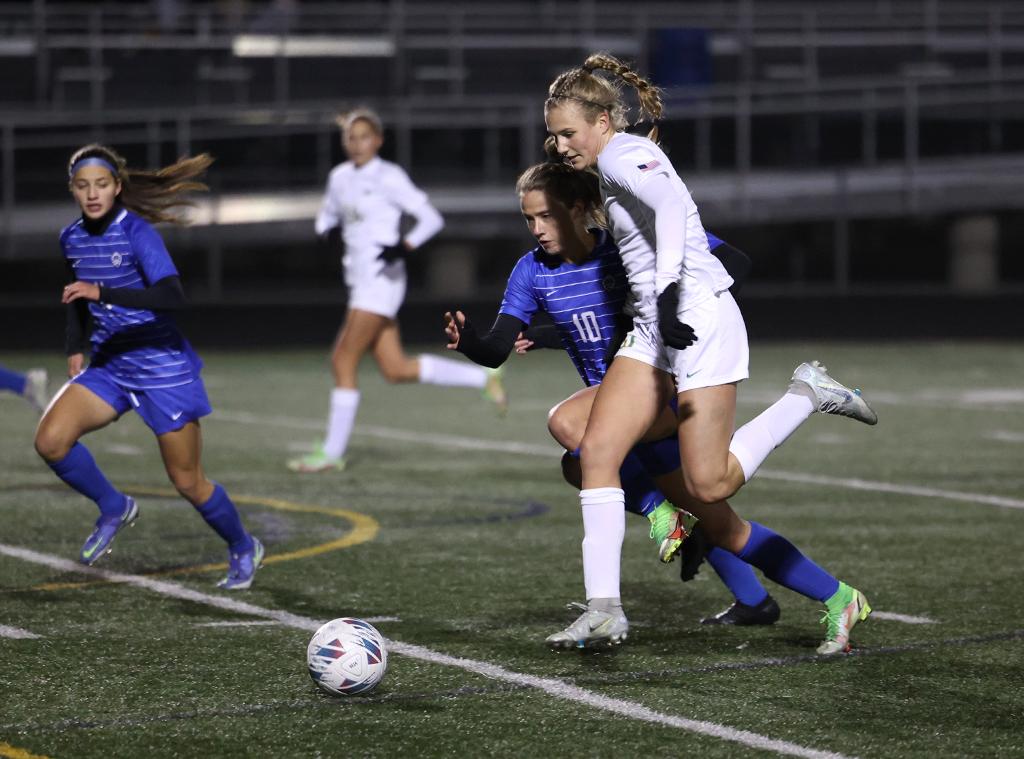 Edina's Izzy Engle runs past Lauren Rusing (10) at midfield. Engle helped the Hornets to a 3-0 win in the Class 3A, Section 2 final over Minnetonka scoring midway through the first half. Photo by Cheryl A. Myers, SportsEngine

For the second consecutive year, Edina found itself celebrating a section championship on the field following a shutout victory over rival Minnetonka.

However, last year’s version of the Hornets and this year’s are quite different. The 2021 team was a heavy favorite with an unbeaten record. This year’s group is a younger one, filling some key holes and hitting its stride at the right time. Both teams ended up as section champions, as this year’s group defeated Minnetonka 3-0 on Tuesday at Prior Lake High School.

Coming off a year where Edina lost just once — in the state semifinal — the Hornets entered 2022 with a different looking group, especially on the back end of things. With Edina trying to find its way, the Hornets struggled at times earlier this season. That included a 3-1 loss to the Skippers on Sept. 13. 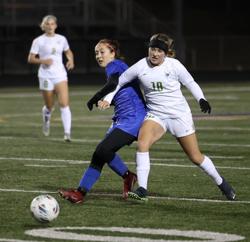 Edina (14-4-1) did eventually find its way and hasn’t looked back since, remaining unbeaten since a 3-2 loss to Wayzata on Sept. 19. That led to Tuesday and the team’s biggest game of the season against one of their biggest rivals. The Hornets were 0-1-1 against Minnetonka during the regular season but were ready for the section final matchup.

“We had a chip on our shoulders,” head coach Katie Aafedt said. “There wasn’t a lot of extra motivation needed.”

The momentum Edina had built in recent weeks carried into the game and was evident right from the start. The Hornets grabbed an early lead when Grace Pohlidal scored off a corner kick to make it 1-0 in the 5th minute.

“It’s always nice when you can get one that quickly,” Aafedt said. “It changes the momentum.”

Edina went on to score two more goals in the first half, including the second goal of the game off the foot of junior midfielder Izzy Engle. She enters the state tournament with a team-best 26 goals this season.

“She’s insane,” Aafedt said. “She’s at a whole other level. She’s so deceptive because we can put her in multiple positions and they are not going to know what she’s going to do. Her goal tonight was textbook.”

After having success against the Hornets earlier this season, Minnetonka (13-3-2) had a change of pace on Tuesday. One big difference for the Skippers was the absence of junior forward Gabrielle Ryan, who missed the section final with an injury after netting a hat trick in the team’s win over Edina during the regular season.

“We still have offensive players who could make up for (Ryan),” Minnetonka coach Kelsey Hans said. “(Edina) started pushing their defense forward. The defense made it hard for us to build anything and get chances.”

The shutout for Edina demonstrates what has been a season-long improvement on the back end.

“Our defense is the unsung hero,” Aafedt said. “We’ve always been able to score goals. Our players have settled into their various roles.”

When the final horn sounded, the celebration was once again on for the Hornets and Aafedt, who celebrated her birthday on Tuesday and received a nice gift in the form of a section championship. Both Aafedt and Engle acknowledged that the team enters the state tournament with everything moving in the right direction.

“Last year we had a lot of momentum,” Engel said. “This year, we had a more rocky start. But I’m so proud of this team for how we’ve come back and pushed through. I couldn’t be more excited for next week.” 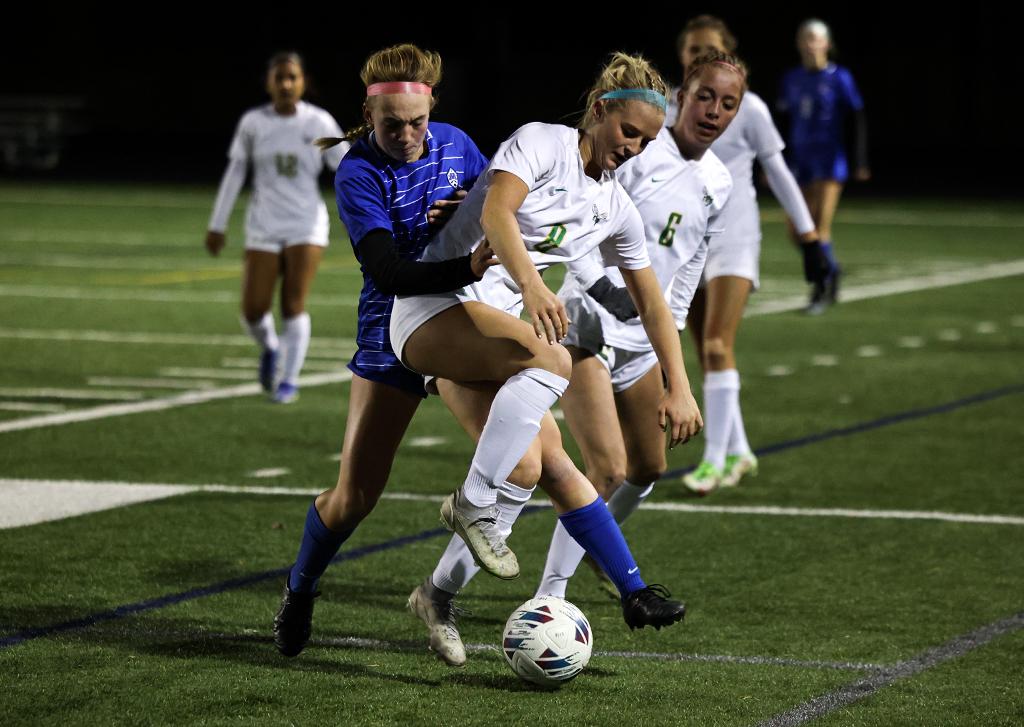 Edina's Grace Pohlidal (8) pulls the ball away from a Minnetonka player. Pohlidal scored first for the Hornets off a corner kick in the opening minutes of the match. Photo by Cheryl A. Myers, SportsEngine

For the second consecutive season, Edina is off to the state tournament after a win in the Class 3A, Section 2 final over rival Minnetonka. The Hornets defeated the Skippers 3-0 on Tuesday at Prior Lake High School.

That outlook changed, however, when Edina scored less than 5 minutes into the contest. Grace Pohlidal got things rolling with a goal off a Hornets corner kick.

The first half scoring continued when junior midfielder Izzy Engle got an open shot at the net and buried her chance to make it 2-0 on her 26th goal of the season. Late in the half, Taylor Howard found the back of the net to make it 3-0.

After allowing 4 goals against Minnetonka in their two regular-season meetings, the Hornets ratcheted things up defensively and kept the Skippers off the scoreboard. Edina goalkeeper Sydney Bakritzes earned the shutout with 8 saves.

While Edina’s offense was fruitful in the opening half, things weren’t quite as successful in the second half. Despite a barrage of shots, Minnetonka goalkeeper Madeleine Schultz finished the match with 9 saves. 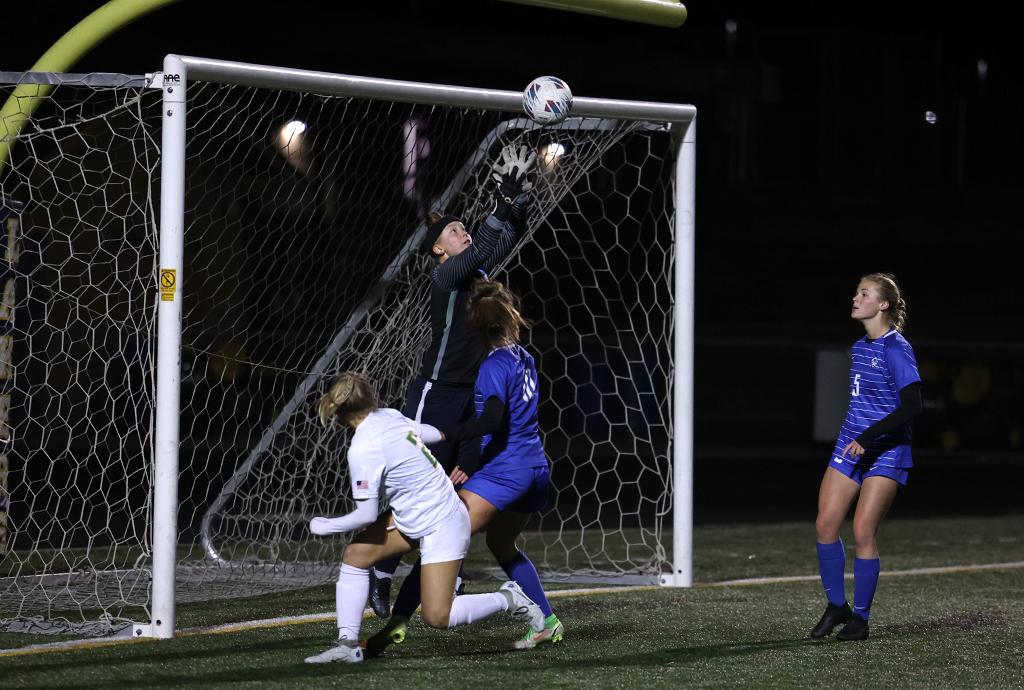 Minnetonka goalkeeper Madeleine Schultz makes a high save late in the first half. Schultz tallied nine saves on Tuesday night. Photo by Cheryl A. Myers, SportsEngine