St. Louis Park's Alma Beaton will follow her mother's path to play soccer for the Gophers

Anne Beaton's daughter will be the first legacy player in the University of Minnesota program. 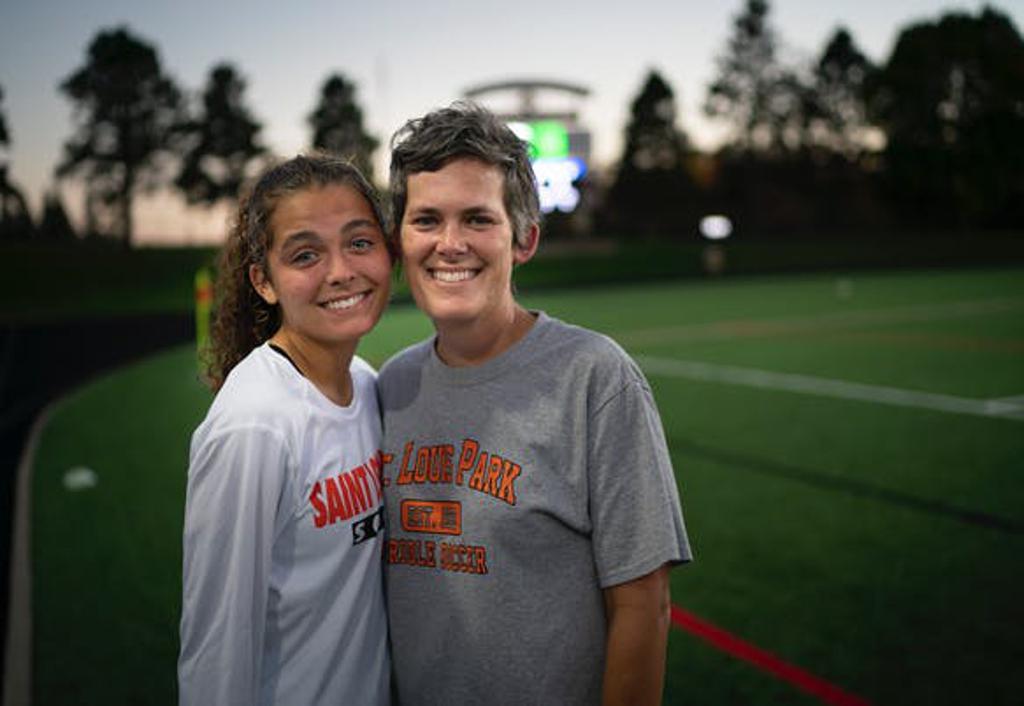 Alma Beaton and her mother, Anne

Not only was her daughter, St. Louis Park standout soccer player Alma Beaton, doing little to erase a two-goal deficit in the second half of the Sept. 30 game against Bloomington Kennedy, the senior midfielder countered every coaching point with a sassy remark.

The fourth such instance meant Alma got the hook.

"I said, 'Go sit down because what you're doing is not working,' " Anne said.

About 20 minutes remained in the game when Alma took a seat. It was a turning point.

"She knows the tactics," Alma said. "She knows that sometimes she needs to make me more mad by taking me out, and then I go in and do better."

Not just do better — do more. The two-word challenge from coach/mom to player/daughter permeated every game and every practice this season, their first together since Alma was a little girl in a swarm of future varsity teammates pursuing the ball.

Beaton grew into a four-year St. Louis Park varsity regular and a two-time Orioles' captain. She is a gifted playmaker on a Minnesota Thunder Academy club team loaded with Division I-bound players. Beaton gave a verbal commitment to play for the University of Minnesota next season, meaning she will be the first daughter of a former Gophers' player to don the maroon and gold.

She has prepared for the next level by elevating teammates this season. Beaton leads a supporting cast of only about a half-dozen players with any type of club soccer experience. The playoffs begin this week and St. Louis Park (7-8) battled to grab the No. 4 seed in Class 3A, Section 6. The Orioles play No. 5 seed Minneapolis Southwest at 5 p.m. Thursday. Beaton took more ownership as a finisher and scored 14 of team's 20 regular season goals. She also assisted on five.

"She's had to level-up a little bit and that's made her more well-rounded, "said Anne, who graduated from Minneapolis South and played two seasons at the University of St. Thomas. In 1992, she joined the club soccer program at the University of Minnesota. Then she earned letters in the Gophers' first two Division I seasons (1993 and 1994).

Andy Beaton, Alma's father, is no soccer slouch, either. The Armstrong graduate played at Macalester College and later for the Minnesota Thunder. He went on to to coach Armstrong to the Class 2A boys' soccer state title in 2003.

Which makes St. Louis Park's success in the second half of this season so much sweeter. The Orioles won seven of its last nine games. And Beaton, following her mother's instruction to play more offensive-minded, recorded four multiple-goal games.

Soccer is an emotional game and Alma Beaton is a maturing adolescent, so she will give an exasperated sigh or throw up her hands in frustration. But she has kept faith with her teammates.

"So many girls are still learning," Alma Beaton said. "But what I've realized throughout the season is that our girls are giving 110%; they are trying to do their best. No one on our team is not trying. So it's my job to do the best I can and provide for our team."

Her contributions start in practice.

"She's a great leader and she cares about her teammates," said sophomore Vesna Dennison, second on the team with four goals. "When something doesn't go our way, she'll tell them, 'Get the next one.' "

Returning to the Kennedy game after a five-minute reset, Beaton booted a ball off a corner kick for Amelia Beach to head into the goal.

Taking a free kick just outside the 18-yard box, Beaton struck the wall of players with her initial shot. Then she corralled the rebound, took one step and fired the ball home.

Beaton later drew a foul and buried the free kick with less than one minute remaining.

Alma Beaton, who glared at her mother those entire five minutes on the bench, smiled.

The mood turned serious when the two embraced.