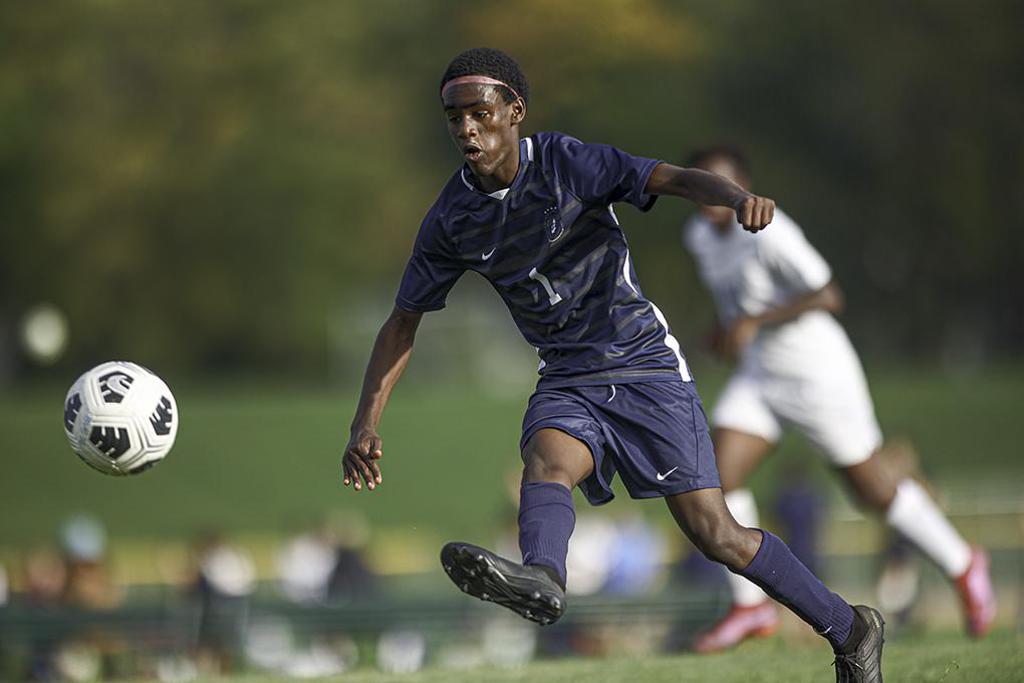 A little bit of luck goes a long way. And, for St. Paul Academy, it was enough to wrap up the school’s first Independent Metro Athletic Conference boys’ soccer championship since 2016.

Freshman Ezra Straub, perhaps the smallest player on the Spartans’ field on Thursday afternoon, had the legs, the timing and yes, the luck to get a head on a ball that escaped Blake goaltender Keaton Rannow’s reach and deflect it into the Bears’ net with eight minutes to play in regulation and tie the game at 2-2. St. Paul Academy kept the Bears off the scoreboard for the next 18 minutes (which included 10 minutes of overtime) to secure the tie and the conference championship. 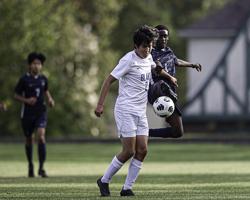 The Spartans, ranked No. 1 in the Class A coaches’ poll for much of the season, finished ahead of Providence Academy and Blake, a Class 2A school that played most of its games out of conference and against Class 2A and Class 3A schools to prepare for the postseason to come.

St. Paul Academy (7-2-4, 5-1-1) won the title despite winning just one of its last five games and closing the last three in 2-2 draws. No matter, because the one victory was at No. 3-1A Providence Academy, the Spartans’ second win over the Lions this season.

It’s been a tough couple of weeks for the Spartans, with little luck coming their way. The team had a player come down with COVID-19 before a Sept. 28 home game against Minnehaha Academy. A few minutes before kickoff, eight more players were pulled from the lineup, and St. Paul Academy ended the day with a 3-2 loss to the RedHawks.

Spartans coach Max Lipset said his team has been scrambling to get back into peak form ever since. The team managed to take a 2-0 victory at Providence Academy on Sept. 30, but Lipset said that effort was further draining on his squad. Draws followed for St. Paul Academy on Oct. 2 against St. Paul Highland Park and Oct. 5 at Minneapolis South.

That left the team needing at least a tie against a tough Blake squad to secure the conference championship. And things looked pretty good when junior forward Cooper Bollinger-Danielson scored his team-leading ninth goal of the season 15 minutes into the game.

But Bears senior Jonah Halper drew a penalty just one minute later when he was tripped in the penalty area by St. Paul Academy goaltender Cooper Olson. Blake’s Tristan Poul took the penalty shot. When Olson cheated to his left, Poul tapped the ball softly in the other direction and in the corner of the goal for a 1-1 tie.

Blake took command of play after that. Poul scored again 14 minutes into the second half, with a hard line drive from 20 yards in front of the Spartans’ net. The Bears’ two goals were the first two scored against Olson this season. And the luck from the wrong side of the ledger continued to roll in for the Spartans.

But that luck changed late in the game when Poul was called for a penalty against Spartans senior midfielder Leonard Larson. Poul thought he was fouled but the call went for Larson. A bit of luck that led to the biggest play of the game for the Spartans.

Senior defenseman Greg Forsberg lined up for the free kick about 60 yards away in the middle of the field. His long ball was perfectly placed, and Straub said he just did what he was trained to do — go for the post.

Straub made a perfectly timed leap and, when Blake goaltender Rannow hesitated before he lunged at the ball, put his head on the ball and snapped his neck toward the goal. The ball bounced off Straub and into the net, bringing his teammates on the field and off toward him at near the corner.

It was a mistake that hurt the Bears. Blake coach Tamba Johnson said one of his players was pushed and fell, and Rannow hesitated, thinking the play was going to be called dead. It wasn’t, Rannow missed and Straub didn’t.

“He was just brave and went up for a header,” Spartans coach Lipset said. “He might be the shortest guy on the field, but he’s just got such great timing. … Ezra really climbed a ladder for that one.”

Straub, although elated with the conference championship, was in no bragging mood. He said he understood the situation Rannow faced and was just lucky that this one went his way.

And now he also knows what it’s like to be a conference champion. 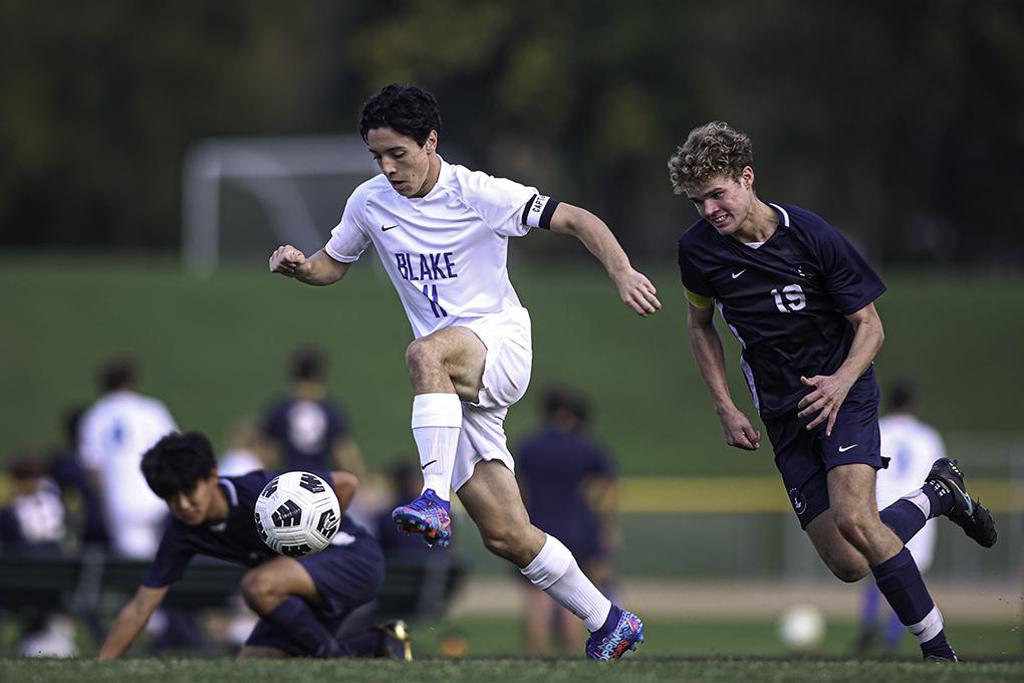 Blake's Tristan Poul (11) breaks away from St. Paul Academy's Leonard Larson in the second half. Poul scored both of Blake's goals. Photo by Mark Hvidsten, SportsEngine

Ezra Straub is at least a couple of heads shorter than Blake goaltender Keaton Rannow. But for one play late in the second half, the freshman midfielder stood just a little bit taller and beat Rannow to a free kick off the foot of teammate Greg Forsberg. Straub got a head on the ball and directed it into the net to give St. Paul Academy a 2-2 tie and its first Independent Metro Athletic Conference championship in five years.

The Bears took a 2-1 lead 16 minutes into the second half when Tristan Poul scored his second goal of the game, and the Bears appeared to be on their way to a victory before Poul was called for a foul on Forsberg in the Spartans' half of the field with eight minutes to play. Forsberg launched a 60-yard assist that Straub was able to tip into the goal to tie the game.

The victory closed the regular season for the No. 1-1A Spartans (7-2-4, 5-1-1), whose two victories over No. 3-1A Providence during the regular season was the key to winning the league title. St. Paul Academy opened the season with a 1-1 tie at Class 3A Rosemount and closed the season with three consecutive 2-2 ties immediately following its second victory over Providence Academy. 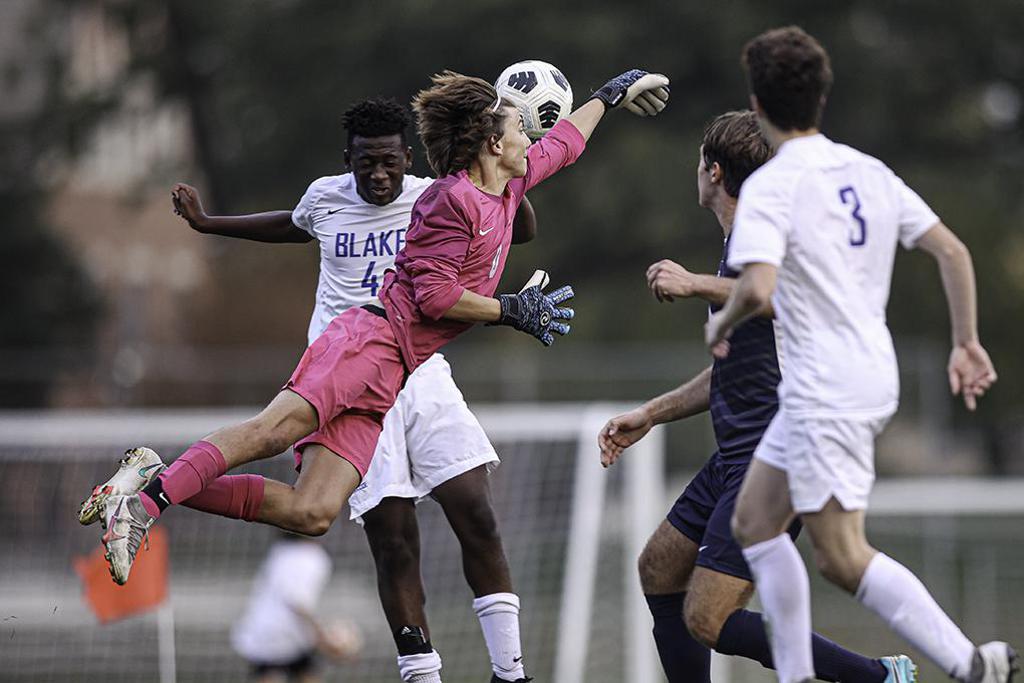