The Rebels, who lost their first game this season a week ago, put away the Bengals to clinch this year's Northwest Suburban Conference title. 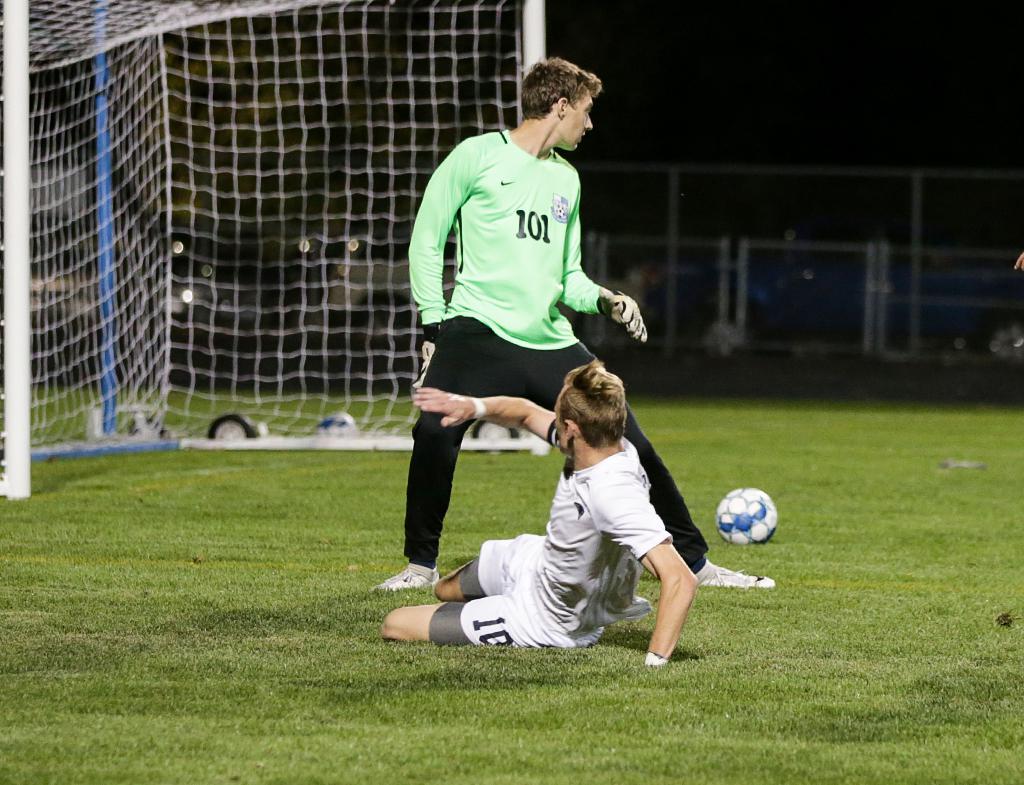 William Heinen (10) slides the ball past goalkeeper Parker Dahlman (101) for a goal late in the second half. Champlin Park defeated Blaine 6-1 to capture the Northwest Suburban Conference title on Tuesday night. Photo by Cheryl A. Myers, SportsEngine 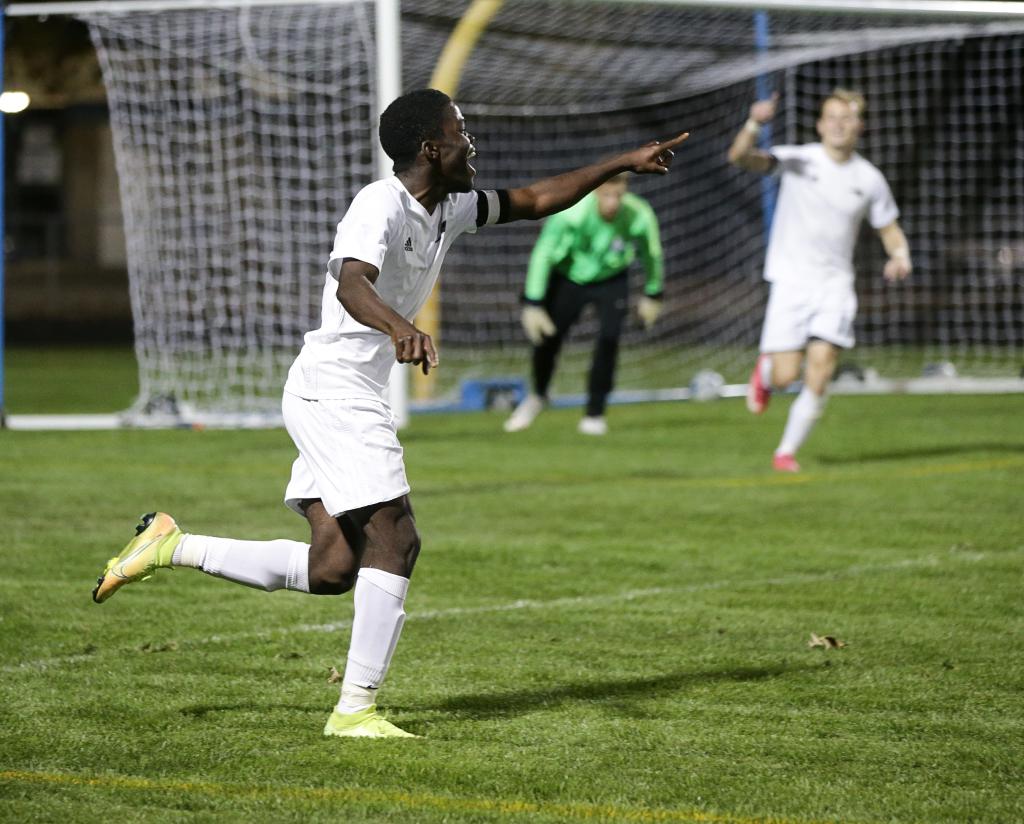 Leo Conneh looks for his teammates to celebrate a second-half goal. Conneh's two goals helped Champlin Park outscore Blaine 6-1 in the final regular-season matchup for both teams. Photo by Cheryl A. Myers, SportsEngine

After each of Champlin Park’s goal on Tuesday, a three-word battle cry was hurled from the Rebels’ bench: “Don’t let up.” Based on the game’s final score, it’s safe to say Champlin Park followed that phrase.

The Rebels put up six goals against Northwest Suburban Conference rival Blaine to cruise to a 6-1 triumph, allowing Champlin Park (10-1-0, 10-1-0) to claim the conference championship — a nice footnote to the regular season after being stunned in a 1-0 defeat to Robbinsdale Armstrong last Thursday.

With that blemish now behind the Rebels, ranked No. 3 in the Class 2A coaches’ poll, they came back and looked like a squad ready to get back in the win column to claim the conference crown and perhaps make a run in the section playoffs. 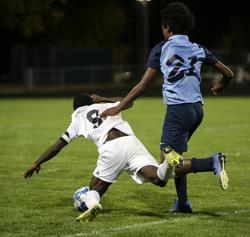 Champlin Park junior forward Yonas Canny opened the scoring halfway through the first half, emerging with the ball to convert off of a set piece. Heinen extended the lead to 2-0 about seven minutes later. A goal from Cullen Mork gave Champlin Park a 3-0 lead over the No. 10-2A Bengals heading into halftime.

With the idea of not letting up well-established on the Champlin Park bench, the Rebels went out and continued to build a lead against Blaine (7-2-2, 7-2-2) in the second half.

Sophomore forward Leo Conneh added a pair of second-half goals and Heinen connected for another, giving him two goals in the match.

Conneh and Heinen front have been key to success for a Champlin Park team that finished the regular season averaging 3.36 goals per game. Conneh is No. 2 on the team in scoring with 12 goals, trailing only Heinen, who has 13 tallies.

“A lot of teams naturally don’t have three forwards up there with that much speed,” Heinen said. “We make defenses adjust to us. It’s something we have and something we use against other teams.”

Besides Conneh and Heinen, Champlin Park has found success this season with a bevy of other players, both in the starting lineup and on the bench.

“We got the results we did because we have a deep bench,” said Rebels coach Scott Dossett. “We went 18-19 [players] deep today without skipping a beat. That’s the key. Everyone knows their role and they go out and execute.”

The Rebels allowed just one goal, which came from Jack Moore midway through the second half to make the score 4-1. Champlin Park otherwise held its own with good defense, backstopped by junior keeper Darius Givance who had seven saves.

Though the Rebels have looked unbeatable at times this season, it hasn’t come easy as the team has struggled with injury and illness.

Despite that and the odd circumstances of the 2020 season, Champlin Park finds itself as the top team in the Northwest Suburban Conference and a team with a chance to capture the school’s first section championship since 2012. If the Rebels want to make that happen, they cannot let up with section foes such as No. 6-2A St. Paul Central.

“As a senior, I’m grateful to have the chance at sections,” Heinen said. “Our section is going to be tough, but that’s what we enjoy and that’s what we’re looking forward to.” 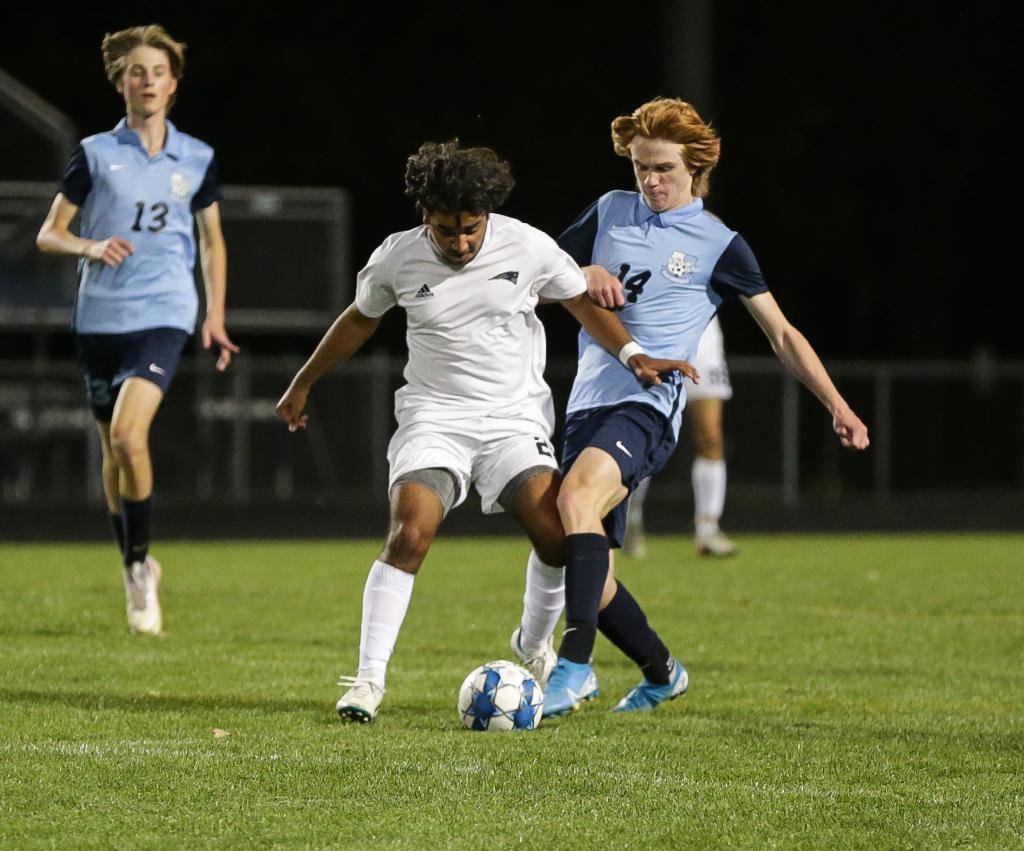 Junior forward Jack Moore (14) takes the ball away from Alfredo Perez (20) at midfield. Moore scored Blaine's only goal of the match midway through the second half. Photo by Cheryl A. Myers, SportsEngine

After suffering its first loss of the season in a 1-0 defeat to Robbinsdale Armstrong last Thursday, Champlin Park responded in a big way to make sure it enters the postseason on a winning note. The Rebels poured in a flurry of goals on Tuesday night to clinch the Northwest Suburban Conference title in a 6-1 defeat of Blaine at Blaine High School.

The scoring for the Rebels, ranked No. 3 in the Class 2A coaches’ poll, started in the first half thanks to junior forward Yonas Canny. He emerged with the ball off of a set piece and converted on his chance to make it 1-0 about 20 minutes into the match.

From there, the scoring kept coming for Champlin Park (10-1-0, 10-1-0). The Rebels added two more goals in the first half with tallies from senior midfielder William Heinen and junior midfielder Cullen Mork.

The Rebels added another three goals in the second half, guided by sophomore forward Leo Conneh who had two goals in the half. Heinen added the third goal in the final minutes of Tuesday’s match.

Blaine goalkeeper Nick Sneen allowed the first four goals and made six saves. Sneen departed late in the second half after being given a yellow card. Parker Dahlman took over keeper duties, making three saves.

Junior goalkeeper Darius Givance made seven saves for the Rebels.