The Rebels took a 2-0 lead early but the Bengals struck back to snag a draw against their Northwest Suburban Conference opponent. 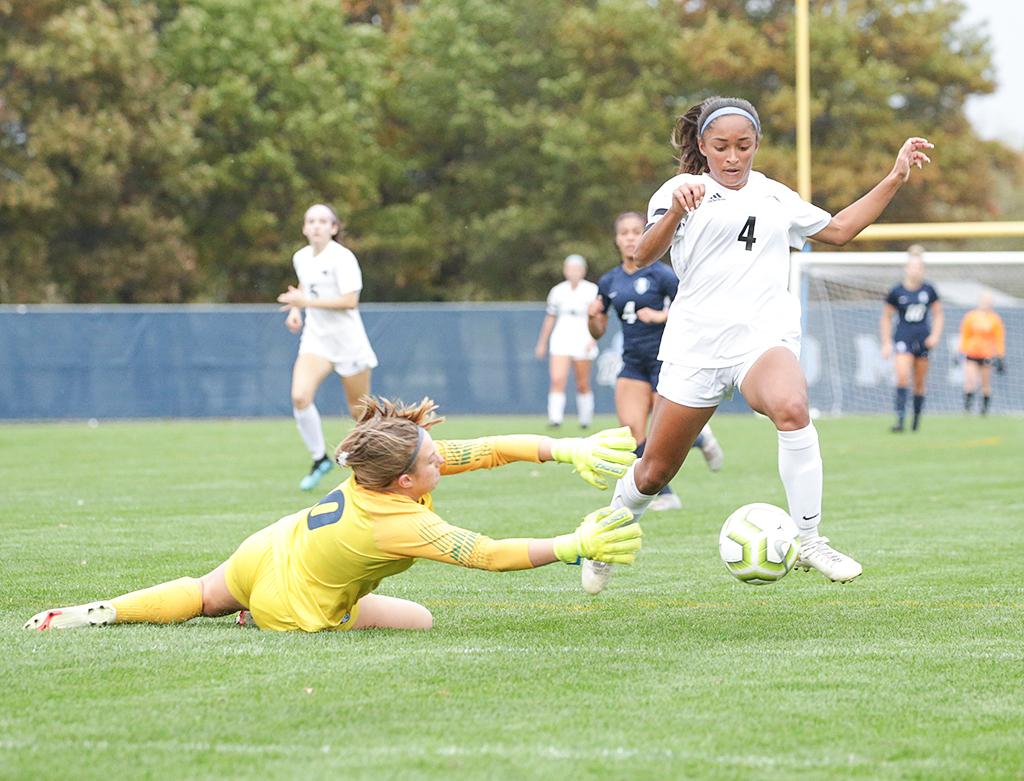 Maille Mathis (4) draws goalkeeper Tess Enlow (0) out of the net before scoring her 19th goal of the season. The Rebels played to a 4-4 draw with the Bengals on Tuesday night. Photo by Cheryl A. Myers, SportsEngine 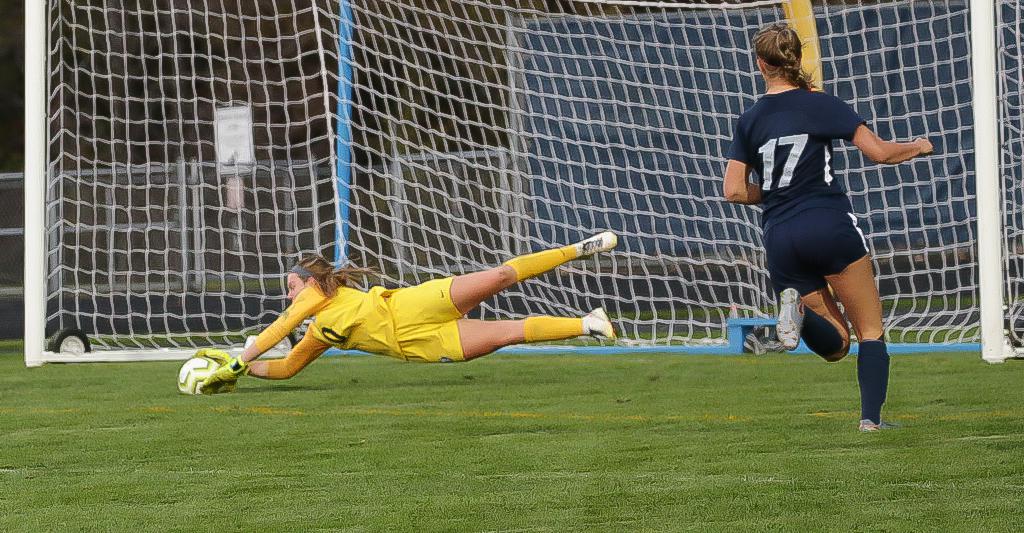 Goalkeeper Tess Enlow (0) makes a diving save in the second half for the Bengals. Enlow's strong play helped Blaine finish a 4-4 tie against Northwest Suburban Conference foe Champlin Park. Photo by Cheryl A. Myers, SportsEngine

With section tournaments just around the corner, both Champlin Park and Blaine proved their offenses are in top form to close the regular season on Tuesday evening.

The Northwest Suburban Conference foes played in a roller-coaster match, leading to an offensive shootout that ended in a 4-4 tie at Blaine High School.

The Rebels, ranked No. 4 in the Class 2A coaches’ poll, flexed their offensive muscles first as they leapt to a 2-0 lead in the first half. Sophomore midfielder Paige Kalal started the scoring on a penalty kick in the game’s 15th minute. Senior forward Maille Mathis followed, scoring her team-best 19th goal of the season 10 minutes later to make it 2-0.

The Bengals (6-3-2, 6-3-2) responded with their own pair of goals as sophomore Kendall Stadden and senior forward Samantha Proulx, both forwards, each scored to even the score at 2 apiece.

“It was a roller coaster,” said Blaine coach Scott Zachmann. “We were trying to make changes, but by the time we did the score changed and all of those conversations were worthless.” 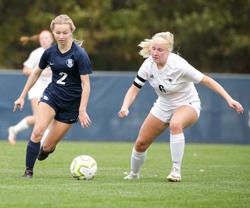 Mathis scored again for Champlin Park (9-1-1, 9-1-1) before the first half ended to break the deadlock. Her 20th goal this season was a floating shot that beat Tess Enlow, Blaine’s junior keeper.

“We knew [Blaine] was going to give us a lot to handle” said Rebels coach Keith Pavelka. “I was really proud of our girls and the transitions we had. We were able to create a few more opportunities.”

The scoring run continued in the second half with the Bengals scoring twice in the first seven minutes to grab a 4-3 lead. Proulx tallied her second goal of the game to even the scoreboard at 3 goals apiece. Stadden then added her second goal of the contest to make it 4-3. Blaine’s onslaught tested Champlin Park sophomore keeper Sarah Martin with 13 shots on net.

Less than a minute later, Kalal tied the match up at 4.

“We could’ve put our heads down and stopped but we went out right away looking to get another goal,” Pavelka said. “It showed that we weren’t going to lay down.”

For the rest of the match, the teams traded solid chances but couldn’t convert. Enlow finished with 19 saves. She did give up three goals but didn’t allow the first score, as she had been removed from the match prior to the first goal after receiving a yellow card for tripping Kalal.

“I told the team at the end that in my 22-plus years of coaching that’s one of the most epic games I’ve seen from a keeper,” Zachmann said. “She just was stoic. She never lost it.”

“We’re focused on that we can play with these teams,” Zachmann said. “We just have to press and work and get that energy going. It was good to see our team come out against a team like that.” 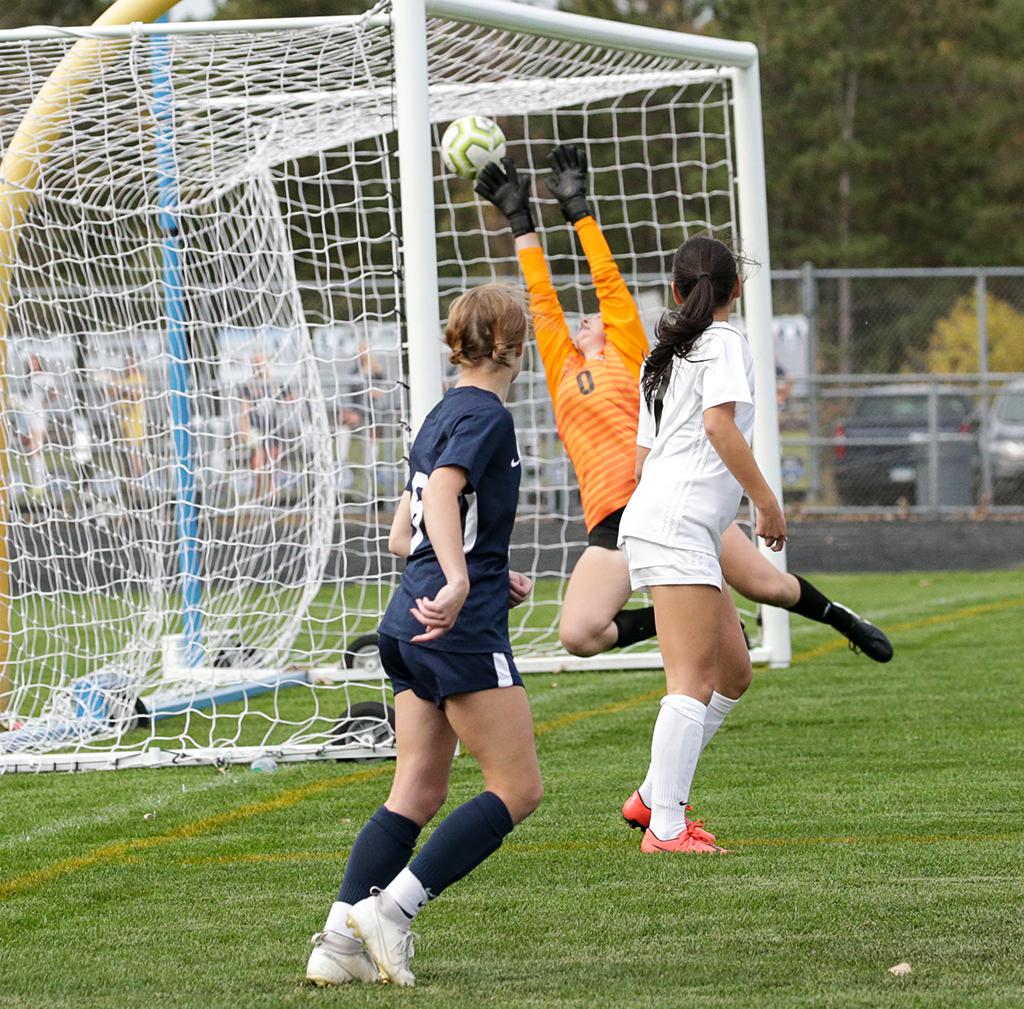 Paige Kalal (5) watches the ball slip past goalkeeper Sarah Martin for a goal in the second half. Photo by Cheryl A. Myers, SportsEngine