Khyah Harper's goal, the only score of the game, lifted the Cougars to a defeat of their Northwest Suburban Conference rivals. 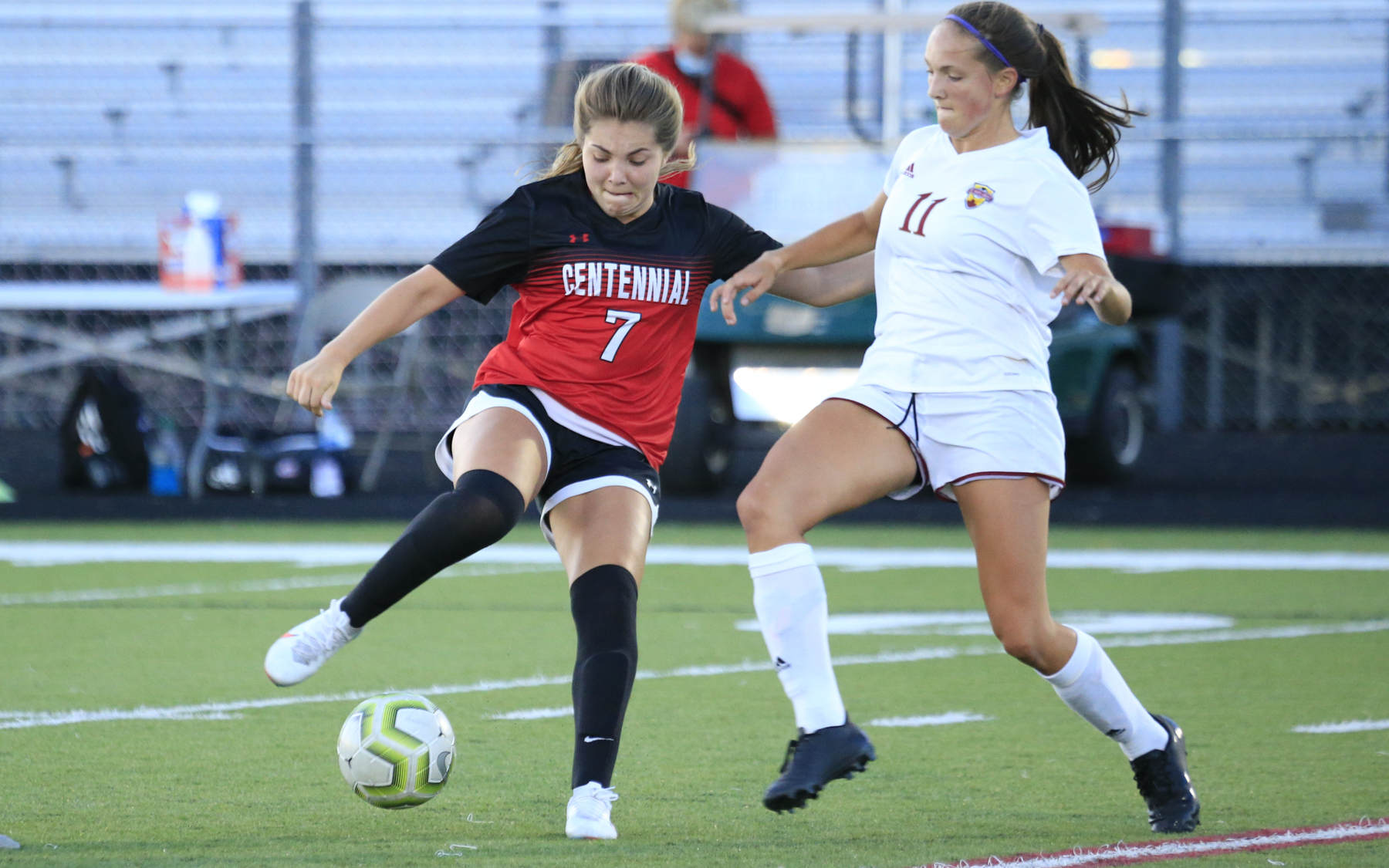 Centennial’s Khyah Harper (7) tries to gain control of the ball under pressure from Maple Grove’s Avery Toms (11) Wednesday at Centennial High School. Harper had the lone goal in the Cougars' 1-0 defeat of the Crimson. Photo by Jeff Lawler, SportsEngine 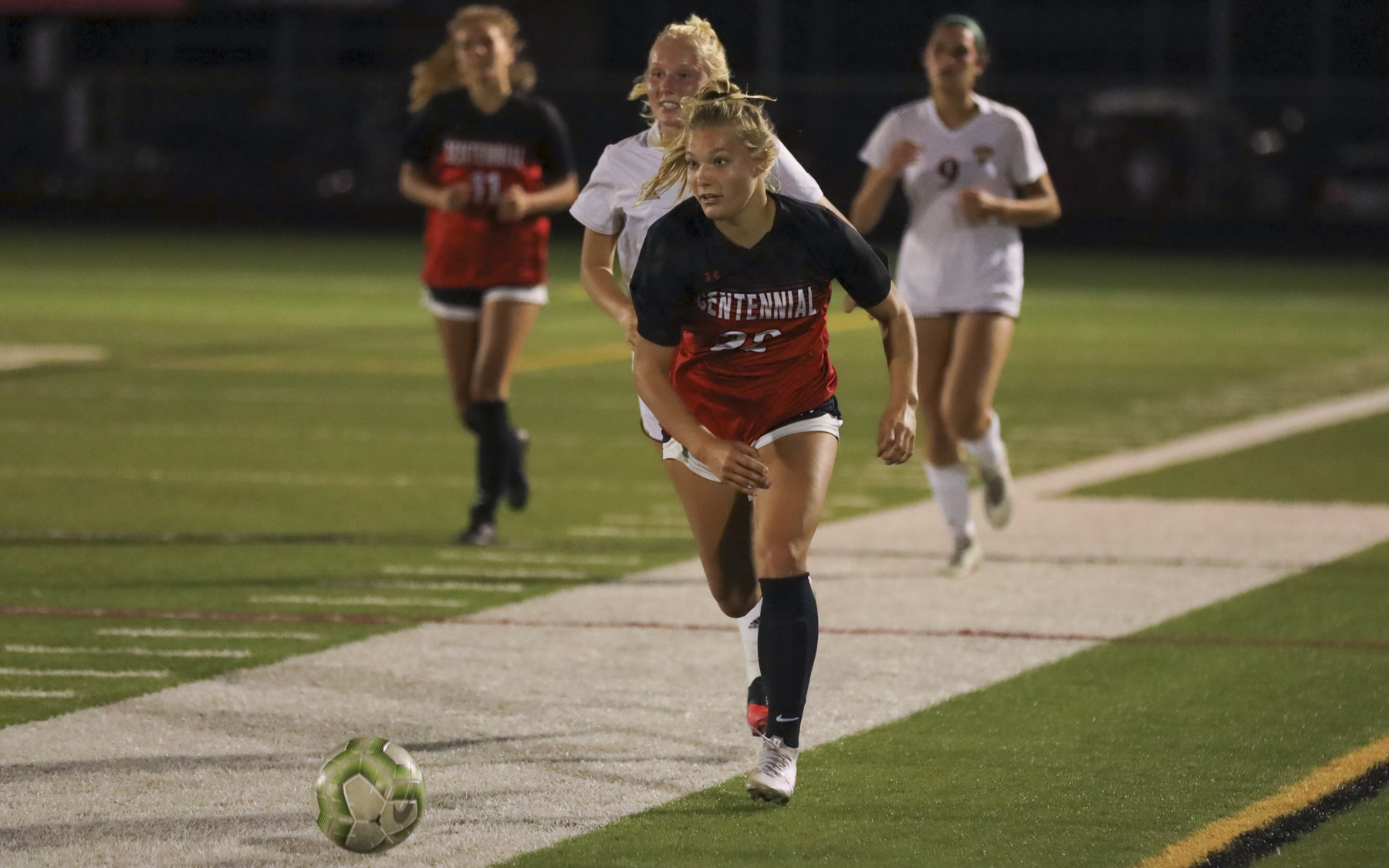 It not often that a single conference game — a matchup just two games into the regular season at that — can have as many motivating factors as Centennial experienced when facing Northwest Suburban Conference rival Maple Grove at Centennial’s Cougar Stadium in Circle Pines on Wednesday evening. But the extra motivation seemed to do the trick for the home team.

Behind timely goalkeeper play from senior Jenna Lang, and an early second-half goal from senior forward Khyah Harper, a University of Minnesota commit, the Cougars utilized those motivating factors to pull a 1-0 defeat of the Crimson, who are ranked No. 1 in the Class 2A coaches’ poll.

“It’s tough when you’re coaching a 1-0 game because it doesn’t always feel as though you’re dominating,” said Centennial coach Ginger Flohaug said. “At any time, your opponent usually has the players to put a ball in the back of the net and tie things up.”

Centennial’s coach is especially motivated this fall, given this is Flohaug’s final season coaching the No. 2-2A Cougars.

“The girls know that I’m done after this year,” Flohaug said. “I talked to Ben [LeVahn, coach of Maple Grove] after the game and he let me know that they’ll miss me too because we just respect each other a lot.”

Revenge of a past defeat was another motivating factor Wednesday. Centennial (2-0, 2-0) and Maple Grove (0-2, 0-2) played for the Class 2A state championship a year ago and Maple Grove’s 2-1 defeat of the Cougars had been a tough pill for Centennial’s players to swallow.

“It felt good to get another chance at them,” said Lauren Ahles, a Centennial midfielder. “I think we’re going to be better than last year.”

Wednesday night’s game highlighted Centennial having more experienced players and a better idea of what it takes to win against the best. The Cougars made certain that those who watched left the stadium with a clear idea as to which team is better right now.

“We knew we had to play quick and play as a team,” Ahles said. “We wanted to take shots and take chances.”

The Cougars put just three shots on net during the first 40 minutes of play, several of which were nearly enough to put Centennial in front. Maple Grove senior goalie Jordyn Lamker, however, was equal to the shots aimed at her. Allowing just a single shot on goal, in addition to claiming the only two corner kicks of the half, set the tone for what would be an energetic second half for the Cougars.

“We missed a lot of opportunities in the state championship game,” Flohaug said. “We have to capitalize on your chances or you’ll be looking back with regrets.”

Centennial spent the first 10 minutes of the second half on the attack, and while the Cougars added just one shot to their total they had anywhere from three to four scoring chances that failed to connect due to Maple Grove defenders holding their ground. But after earning a corner kick, with the clock having just passed 9 minutes of play in the half, Ahles found Harper open for a pass to connect for the only shot that mattered.

“We practice a lot of corner kicks and set pieces,” Ahles said. “We’ve worked on and run that play before, and I think the coach even knew it but it didn’t seem like they recognized it.”

Multiple impressive saves by Lamker, as well as a shot that rang off the crossbar, kept Centennial from pulling away. Maple Grove, however, couldn’t capitalize on its strong defensive play to generate enough offense to tie the game.

“We said our fire had to be bigger than theirs,” Flohaug said. “We came off a big win and we just played for each other and played through our mistakes and always had a recovery when we made a mistake.”

Centennial took down Maple Grove 1-0 at Cougar Stadium in Circle Pines Wednesday evening in a rematch of last year’s Class 2A state championship matchup. The Cougars booted the game’s lone goal early in the second half off the foot of senior forward Khyah Harper.

The Cougars, ranked No. 2 in the Class 2A coaches’ poll, outshot the No. 1-2A Crimson 3-1 in the first half but a set play started by Centennial junior midfielder Lauren Ahles ended on the foot of Harper, a University of Minnesota commit, and she didn’t miss her scoring opportunity.

Maple Grove goalkeeper Jordyn Lamker made 10 saves, including several quality chances to keep the Crimson (0-2, 0-2) within one goal. While not asked to do as much as her counterpart, Jenna Lang of Centennial (2-0, 2-0) made five saves in the shutout — her first of the season. 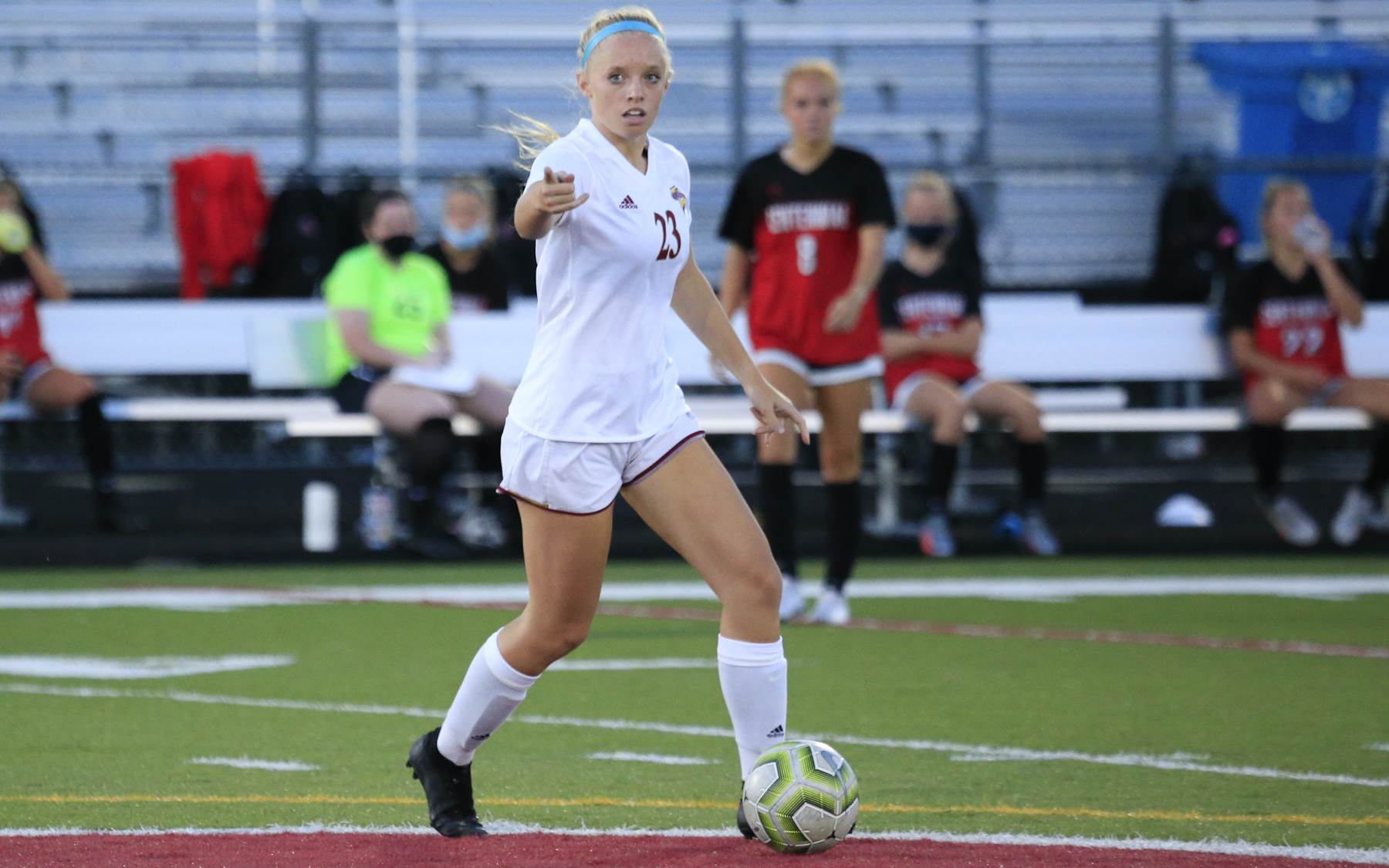 Maple Grove’s Macie Sides (23) looks for an open teammate during Wednesday night’s match against Centennial. The Crimson fell to the Cougars 1-0 at Centennial High School. Photo by Jeff Lawler, SportsEngine