Sophomore Noah Hermanson scored with 10 seconds left to give the Stars a 3-2 victory over defending champion Blake. 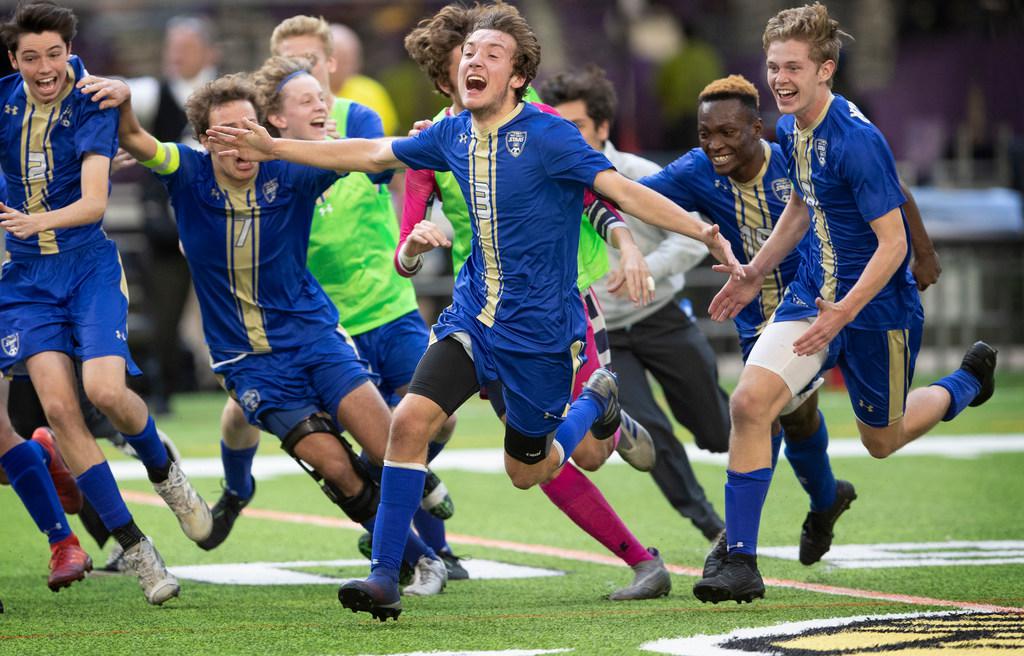 Noah Hermanson (3) of Holy Angels dashed across the field with teammates after scoring the winning goal in overtime to defeat Blake 3-2 for the Class 1A championship. Photo: Jerry Holt • Jerry.holt@startribune.com

Hermanson turned to the Stars’ bench with 1 minute and 13 seconds left in the game Thursday at U.S. Bank Stadium. He told coach James See to sub him out, thereby making him ineligible to participate in penalty kicks.

See corrected him. Even players on the bench could be called upon. But forget all that, the coach said. Just believe.

Hermanson ultimately made the conversation moot. His left-foot shot twisted and turned through the air and into the back of the Blake net for a 3-2 victory with 10 seconds left.

“I was trying to put it far side, but it deflected and kind of chipped up more,” said Hermanson, who was set up by a pass from sophomore Shalim Montes Hernandez. “At first, I saw it go [right] and I thought, ‘Oh shoot, I missed the net.’ Then it just kept spinning back in.”

The Stars (21-0-1) edged defending champion Blake (17-5) and completed an undefeated season. The program earned its first state title after placing second in 2000 and 2001.

Blake showed a champion’s resolve, however, , and sent the game to overtime.

First, midfielder Keegan James buried a penalty shot and the Bears trailed 2-1 in the 72nd minute. Then came the tying goal. A Benji Pomonis steal and pass, a header by Howard Henderson and a slick Jackson Lagos finish ignited belief within the Bears.

“We all gathered together and we said, ‘Hey, this is the time, right now,’ ” Henderson said. “We had the momentum, but we weren’t able to find the back of the net.”

Hermanson did and the Stars triumphed.

“We kept pushing on,” See said, “and believed something would happen.”

Noah Hermanson’s goal late in overtime sealed a 3-2 victory in the Class 1A boys’ soccer state tournament championship game and an undefeated season for Holy Angels.

The Stars (21-0-1) edged defending champion Blake (17-5) on Hermanson’s left-foot finish from about 15 yards away on Thursday at U.S. Bank Stadium.

Holy Angels had built a 2-0 lead on a first-half goal from Porter Ball, who beat two defenders, and one early in the second half from Conor O’Rourke, the Class 1A Mr. Soccer award recipient.

Blake showed a champion’s resolve, however, and sent the game to overtime.

First, Keegan James buried a penalty shot. The tying goal started with a Benji Pomonis steal of the goalkeeper’s throw. A left-foot pass from Pomonis came next. Howard Henderson headed the ball toward Jackson Lagos for the finish.

The game appeared headed for a penalty kick shootout until Hermanson's goal with 11 seconds left in overtime.