Following the shutout, the Bears improved their record to 7-0-0 on the season. 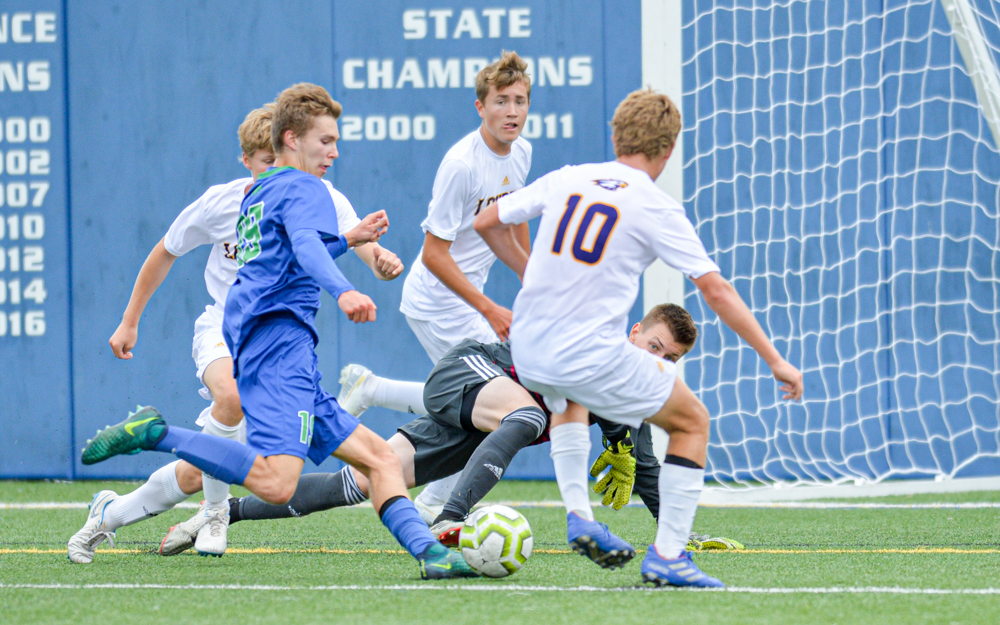 Blake senior forward Will Mortenson scores the game's first goal with a pass from teammate Jake Shapiro. The Bears went on to win the game beating the Eagles 4-0 at the Gordy Aamoth stadium in Hopkins. Photo by Earl J. Ebensteiner, SportsEngine

As the defending state champion in Class 1A, Blake has a big target on its back. That hasn’t bothered the Bears in the slightest.

After starting their season with an 8-1 win over Fridley and a 10-1 win against Spring Lake Park, the Bears (7-0-0, 4-0-0) began an even more impressive defensive run, shutting out each of their next four opponents while averaging just over eight goals per game entering Saturday’s contest against Rochester Lourdes at Blake’s Hopkins campus.

Blake’s defensive prowess was on display yet again against Rochester Lourdes, as the Eagles (3-2-0, 1-0-0) were unable to record a shot on net in Blake’s 4-0 win.

What have been some of the keys to running up a shutout streak that is now beyond the 400-minute mark?

“We try to have the ball a lot,” Blake coach Tamba Johnson said. “Our goal going into every game is to earn a shutout.”

Blake’s possession-heavy offense is fed by a defensive mindset taught by Johnson.

“We put pressure on people, and we try and get the ball back in six to 10 seconds,” Johnson said. “We take pride in not losing the ball, and if you do lose it, it’s your job to get it back. Effort is non-negotiable.” 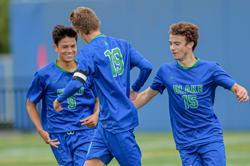 Senior forward Will Mortenson, who scored Blake’s first goal in the 15th minute of play after a nifty pass through traffic from teammate and junior forward Jake Shapiro, stated what it took to keep the Eagles scoreless Saturday.

“Rochester [Lourdes] is an organized team that tested us and worked hard,” Mortenson said. “You have to play them physically and tackle to win the ball back. They have great speed on top, so you have to be on your toes.”

Three of Blake’s four goals came via passing after a takeaway on defense that followed into a transition attack. The exception was junior forward Keegan James’ goal on a penalty shot early in the second half.

Johnson made it clear that passing is key to everything the Bears, the top-ranked team in the Class 1A coaches’ poll, try to do.

“Everyone in our program knows that if you can’t pass the ball, you aren’t going to step on the field,” he said. “We aren’t one of those teams that will kick and chase, we need to be able to trust you to make the right decision. Our guys hold each other accountable on that.”

When a team like Blake is on this kind of scoreless streak, there’s usually at least one moment in a game that comes close to breaking it. Against the Eagles, it came with about six and a half minutes remaining before halftime, when Lourdes was awarded a free kick inside Blake’s half of the field along the near sideline.

“We had a bad turnover and an unnecessary foul,” Johnson said. “There was a bit of a mix-up between our defenders and our goalie about who would go and get the ball. If Landon [Peterson, the team’s goalkeeper] is going to go after that ball, he needed to do it with authority, and if he wasn’t going to, the defense needed to go and get it.”

A well-placed header off the free kick beat Peterson, a senior, and crossed the line to seemingly put the Eagles, who were trailing 2-0 at the time, right back into the game. But the goal was waved off by the referee.

“We knew right from the start that it was going to be a competitive game,” said Mortenson. “It’s good to play against teams that can test us like that.”

No other possession the Eagles put together in the game was close to causing Peterson any trouble, and that made Johnson happy.

“We left a few chances out there,” he said. “But it was a good showing for our guys.” 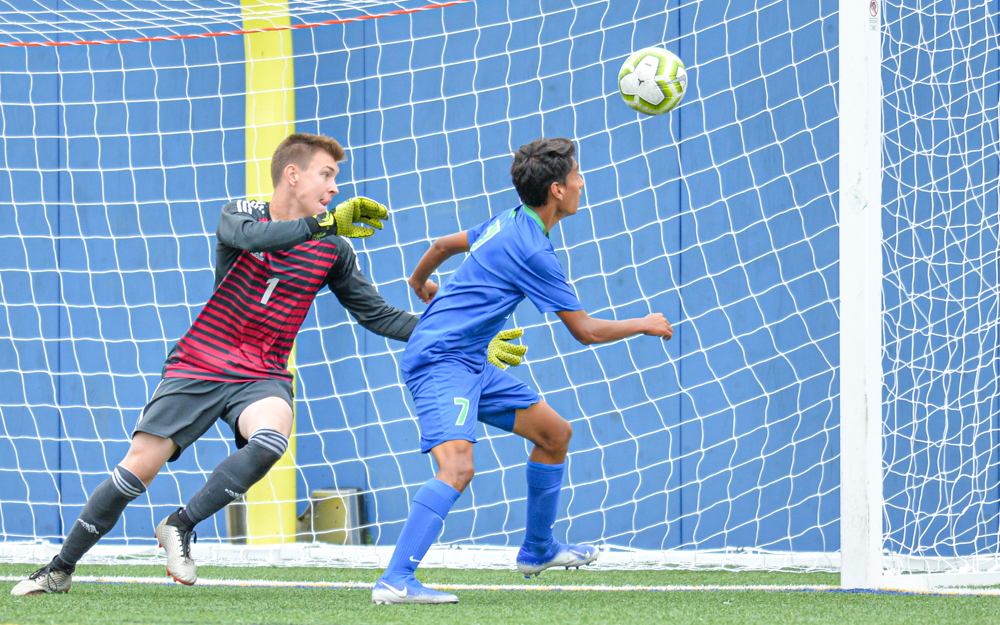 It took Blake longer than usual has to break through offensively, but its potent offense and lock-down defense lived up to its reputation in a 4-0 win over Rochester Lourdes at William J. Glen Field at Blake’s Hopkins campus on Saturday afternoon.

The Bears (7-0-0, 4-0-0) entered the match averaging over eight goals per game and they pushed early. A pass from junior forward Jake Shapiro after a speedy charge into the box found senior forward Will Mortenson, who knocked home Blake’s first goal of the game.

The Bears, ranked No. 1 in the Class 1A coaches’ poll, added to their lead five minutes later, as Jackson Lagos’ rush on the Eagles’ net was finished off by Benji Pomonis.

Rochester Lourdes (3-2-0, 1-0-0) thought it had closed the gap late in the first half, but a momentary celebration after what the Eagles thought was a goal was cut short when it was disallowed by the officials, keeping Blake’s lead at 2-0 lead entering halftime.

A penalty shot goal by Keegan James 41 seconds into the second half, and an unassisted marker from Matt Carlson in the 72nd minute, completed Blake’s scoring output. 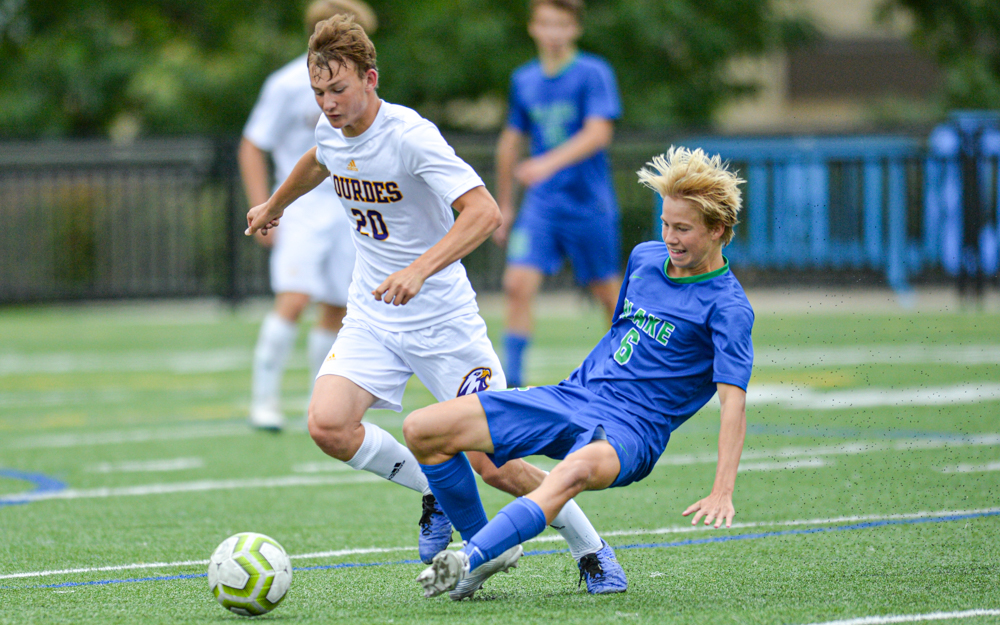 The Eagles' Daniel Brown takes the ball away from Blake's Matthew Carlson early in the second half. The Eagles lost to the Bears 4-0 Saturday afternoon in Hopkins. Photo by Earl J. Ebensteiner, SportsEngine