The Skippers, who defeated Maple Grove in a shootout in the quarterfinals, advance to the championship game on Friday. 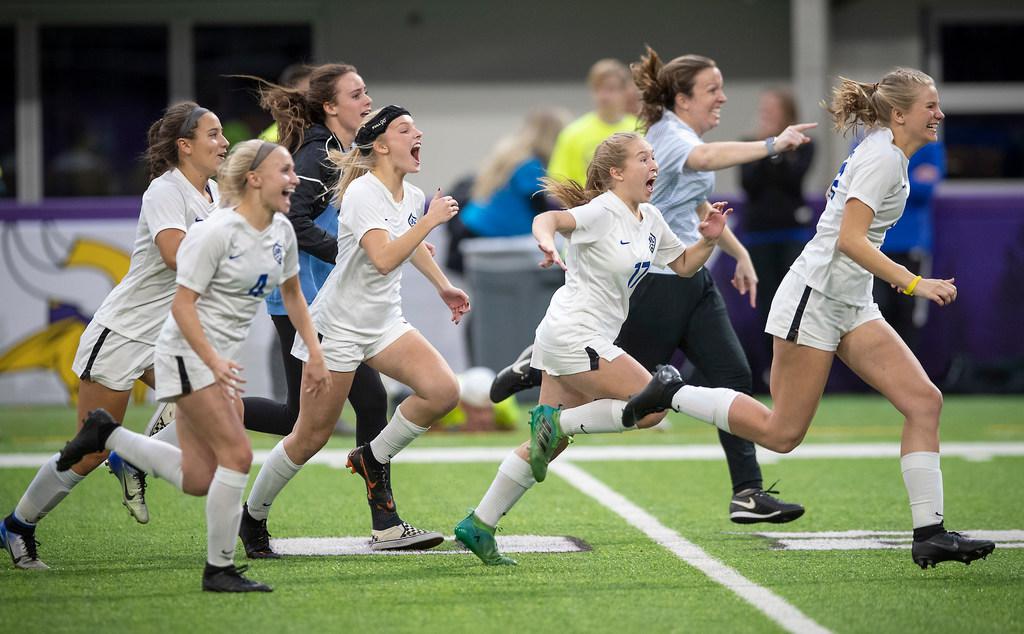 Minnetonka players ran out to the field to celebrate their team's victory over Eagan in a shootout Tuesday at U.S. Bank Stadium. Photo: ELIZABETH FLORES • liz.flores@startribune.com

For Minnetonka, the overtime shootout to decide the Class 2A state tournament semifinal against defending champion Eagan and star Megan Plaschko on Tuesday could not have started better.

The Skippers won the shootout 4-3 and advanced to the Class 2A championship game at 3 p.m. Friday. The teams played to a scoreless tie through regulation and a 20-minute overtime.

No. 5 seed Minnetonka (15-4-1) opened the shootout with Riley Brackin scoring on Plaschko. Then Plaschko, who plays goalkeeper and also scored four goals this season, took Eagan’s first attempt and was stymied.

When Minnetonka's Lissa Mizutani scored next, she gave the Skippers a 2-0 lead and a psychological edge.

“As soon as I saved the first one and it was [Plaschko’s], I knew she was going to be somewhat off her game,” Minnetonka goalie Paige Kahlmeyer said. “Shootouts can really get in your head.”

Sophomore Olivia Muehlberg felt the pressure build but she didn’t falter when her number was called in round seven.

“I just walked up and thought, ‘I got this,’” said Muehlberg, who previously recorded one shot and zero goals this season.

Muehlberg walked into the situation fresh. Plaschko, brilliant all season for previously unbeaten and No. 1 Eagan (17-1-3), felt the weight.

“As the game goes on and it’s the fifth sixth, seventh shooter, and you know that if you don’t make a save, that could be it – that’s when it really starts to get to you,” Plaschko said.

Minnetonka defeated Eagan 4-3 in a shootout to knock off the top seed and defending Class 2A champion in the first semifinal Tuesday at U.S. Bank Stadium.

The fifth-seeded Skippers will play Friday in the championship game.

With the shootout tied 3-3 after five founds, both teams failed to score on their sixth try. Then Skippers sophomore Olivia Muehlberg put a shot past Eagan goalkeeper Megan Plaschko, this season's Ms. Soccer and the Star Tribune Metro Player of the Year. The ensuing try by Eagan bounced off the crossbar, giving the Skippers the victory.

Eagan had the better of play in the second half and continued to press in the 20-minute overtime.

Minnetonka had a scoring chance late in the overtime but the ball was knocked away near the Eagan goal.

It was Minnetonka’s second consecutive game ending in a shoot-out. The Skippers defeated Maple Grove in the quarterfinals last week,