Minnetonka holds off Maple Grove in a shootout

The Crimson rallied to the score in regulation but the Skippers' Paige Kahlmeyer made two big saves in overtime and stopped a final shootout try for the victory. 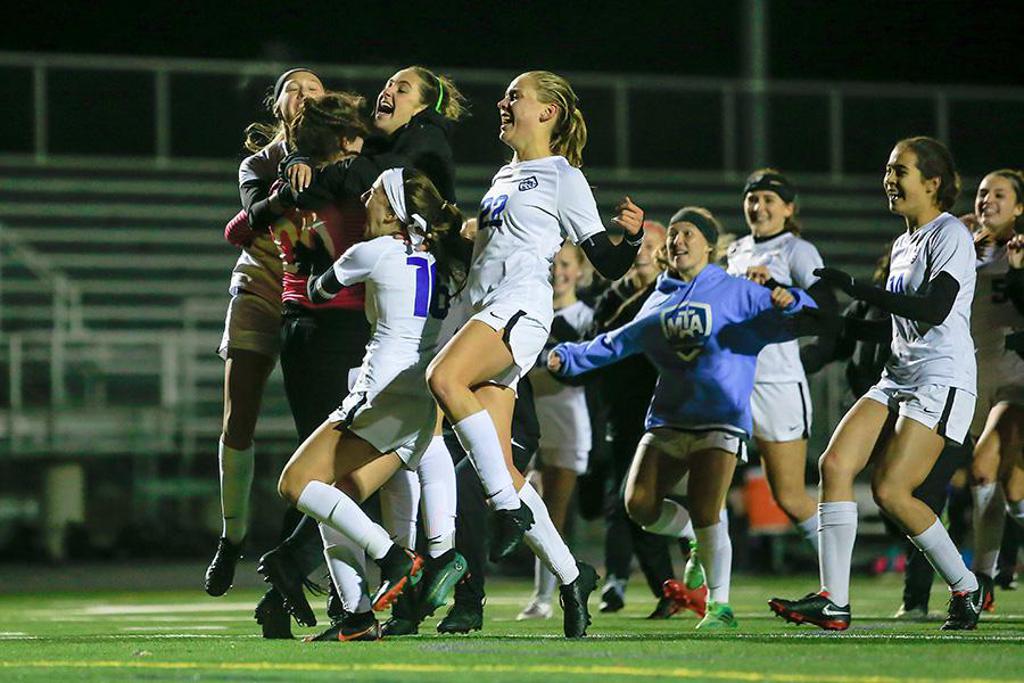 Minnetonka players, led by Riley Brackin (22), rush to goaltender Paige Kahlmeyer after her stop on the final shot of a shootout gave the Skippers a 2-1 victory over Maple Grove. Photo by Mark Hvidsten, SportsEngine

Minnetonka survived a late push by Maple Grove to get a 5-4 shootout victory in a quarterfinal match Tuesday in the girls' Class 2A state tournament at Prior Lake High School.

Senior goalkeeper Paige Kahlmeyer two diving saves in overtime to keep the score tied 1-1 and force the shootout. She then stopped Crimson leading scorer Mannon McMahon in the fifth round of the shootout to clinch the victory. 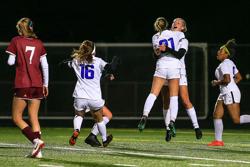 “Every time I dive, I just hope I push it wide,” Kahlmeyer said. “After coming back from an ACL (injury), I just gotta launch and get a touch on the ball.”

The two teams traded goal after goal through the first four rounds of the shootout. The Skippers' Grace Weisman beat Crimson goalkeeper Martha Schmid, Kahlmeyer made one last diving stop to give the Skippers the 5-4 edge.

“I knew I just had to read (the shooter) right,” Kahlmeyer said. “They kept going to (my right). One went to the left and I was like, ‘OK, I’ll shake it off.’ I knew as soon as (McMahon) lined up, she’s going right.”

The Skippers (14-4-1) scored first in the ninth minute of the game when Riley Brackin re-directed a pass from Jess Kollodge into the open net.

The fifth seeded Crimson (15-3-2) managed just one shot the first 48 minutes of the game, but Kelley Kloncz tied the game in the 28th minute of the second half.  She got on a breakaway and slid a shot under a diving Kahlmeyer into the net.

The Crimson gained momentum from its goal. From that point on they had more chances to win the game than the Skippers but get the ball past Kahlmeyer .

“(Kahlmeyer) is a kid that comes up big,” Skippers coach Jeff Hopkins said. “She has time-and-time again for the past three years for us. Tonight she came at the right moments. You need a hot goalkeeper and that’s what we have.”