Down a man, Blake scores a late goal against Totino-Grace for a trip to the state tournament 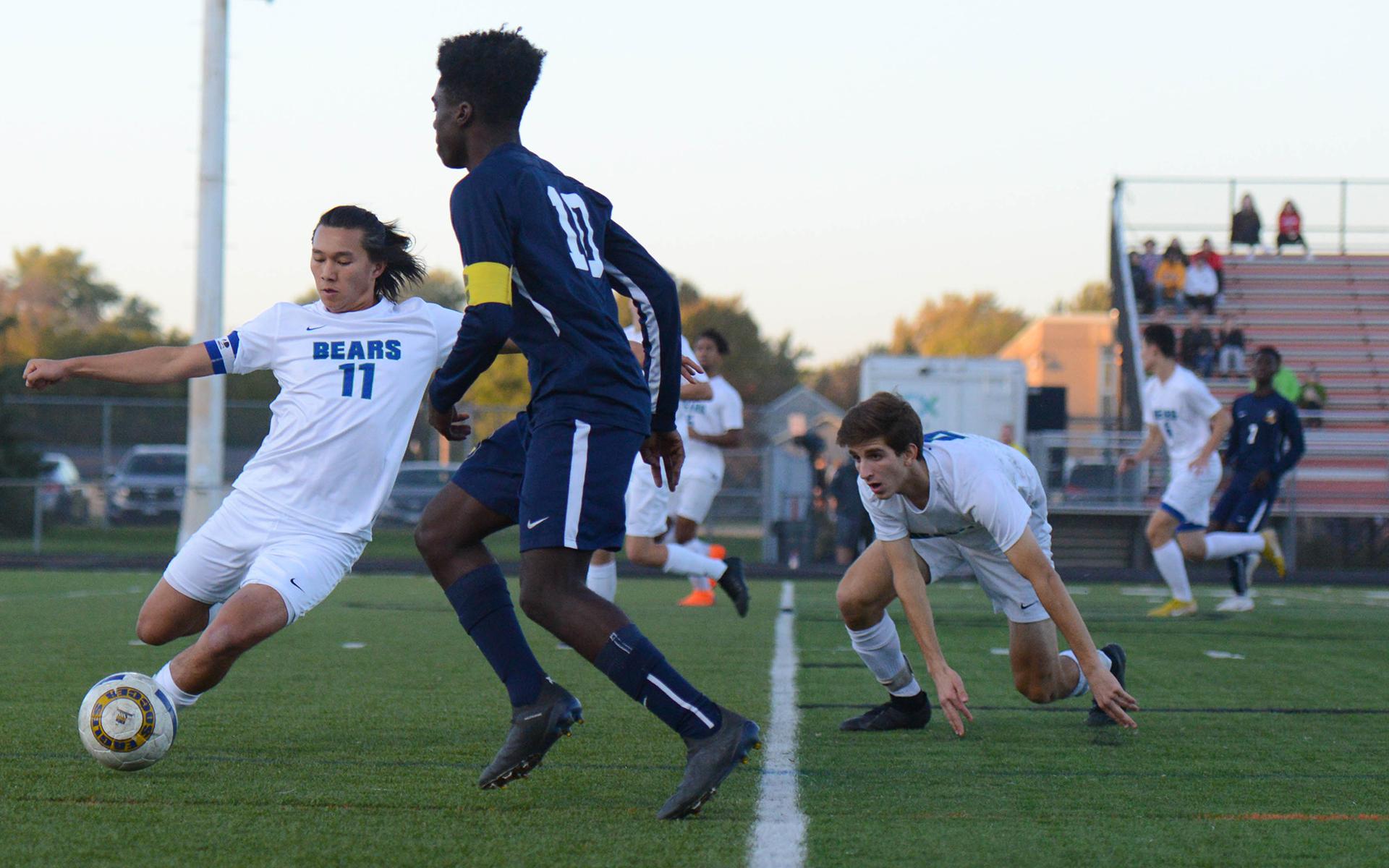 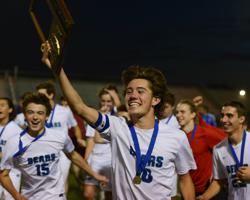 As one of the leading scorers for the Blake boys’ soccer team, you would expect that Haluk Ercan-Fang might balk when he was moved from forward to defense in his team's Class 1A, Section 5 title contest against Totino-Grace.

You would be wrong.

"Usually I play rightback or centerback for my club team, so I'm not unfamiliar with it — and that's where I prefer to play," Ercan-Fang said. "But when the other team has someone as talented as Herbert [Endeley], that's where I had to play."

Ercan-Fang and his fellow Bears were able to keep Endeley, a Mr. Soccer finalist, and the rest of the Eagles' high-scoring offense in check as Blake claimed a 2-1 victory at Osseo High School Thursday.

Totino-Grace (14-2-2), ranked No. 1 in the final Class 1A coaches' poll of the season and the section’s top seed, saw its chances of repeating as state champion end with the loss. Ercan-Fang was key as the Blake (15-3-1) defense, which posted 13 shutouts this season, held in check an Eagle offense that had produced 68 goals in 16 games.

That high-powered offense was the reason Blake coach Tamba Johnson decided to move Ercan-Fang to the back line.

"Playing against their front line, and guys like Steevenson [Lamarre] and Herbert, you have to do what you can to stop them," Johnson said.

While Endeley had several long runs during the match, he did not score thanks to the work of Ercan-Fang.

"I tried to force him to the inside because I knew that's where I had help from my teammates," Ercan-Fang said. "I know he's very fast — you saw him dribble through us once or twice.

"But we needed to corral him and not give him space. And we kept him off the scoresheet."

Jake Lundberg, who scored Blake's game-winning goal in the waning moments, said he and his teammates appreciated the sacrifice Ercan-Fang made.

"That just shows Haluk's versatility," Lundberg said. "Everyone on his club [team] knows him as a kid who plays strong defense, but when he's [playing] in high school he's such a hard worker and so aggressive, it makes him so dangerous on offense."

"He's their engine," Vance said of Ercan-Fang. "Wherever they need him, that's where they put him.

"He was definitely the man of the match."

Blake drew first blood when Jake Shapiro took a through ball on a counter-attack and fired a shot high over the left shoulder of Eagles' keeper Philip Ronza with 27:19 still to play in the first half.

Totino-Grace, which struggled to connect with its talented forward line through much of the first half, managed to do so on a set piece and tied the game. Liam Vance took a free kick just inside the centerline and found Jacob Wacek to the left of Bears goalkeeper Will Taylor.

Wacek spun and shot, and he found the back of the net with 8:18 remaining.

"When we leveled the score, I thought that was energizing to us," William Vance said. "I thought we were in charge the rest of the first half and into the second half, but we couldn't take advantage of it."

The second half featured plenty of scoring chances but no goals. Then with 11:34 on the clock the Bears were dealt what appeared to be a crippling blow as Howard Henderson drew a red card after a violent collision with the Eagles' Eric Krieger.

But instead of pulling back, the red card seemed to energize Blake.

"We realized that this was it," Lundberg said. "They had one more guy than us, but we told each other that the only way we could beat them was to work harder than them.

"We knew we had to deep dig and work hard — and it all came together."

And it was the Bears, despite being short-handed, who netted the deciding goal. And it was Ercan-Fang who jump-started the game-winning set piece — although he said the credit for the play belongs to his coach and to Lundberg.

"I was not going to take that throw [from the right sideline] because I was playing left back, but Tamba called me over to take the throw," Ercan-Fang explained. "The 'keeper bobbled one of my throw-ins in the first half, I just decided to throw it as close as I could to him.

"And give credit to Jake for getting up in the air and heading it in."

So Ercan-Fang threw the ball towards the Totino goal, where it found the head of Lundberg -- and then found the back of the net with just 1:40 to play.

"I know Haluk has super-long throws, so I just decided to get as close to the goalie as I could," Lundberg said. "I just wanted to get a touch on it and make something happen, and I was able to redirect it."

While Johnson was excited about his team's victory, he also felt sympathy for the losing team.

"It's a shame [someone had to lose], because I think three of the four best 1A teams in the state are in this section," he said. "Last year I felt the same way.

"Totino-Grace is a great team that plays hard and is well coached. And I hope Herbert wins Mr. Soccer, because he's the best player in the state."

William Vance said the disappointing finish should not diminish the memories of a strong season.

"I'm very proud of these guys, because they talked about being hungry from the very beginning," Vance said. "Instead of defending something, they were hungry to get a state title again this year.

"I would argue this is the best section in the state, and I feel the winner of this section has a great chance to win state." 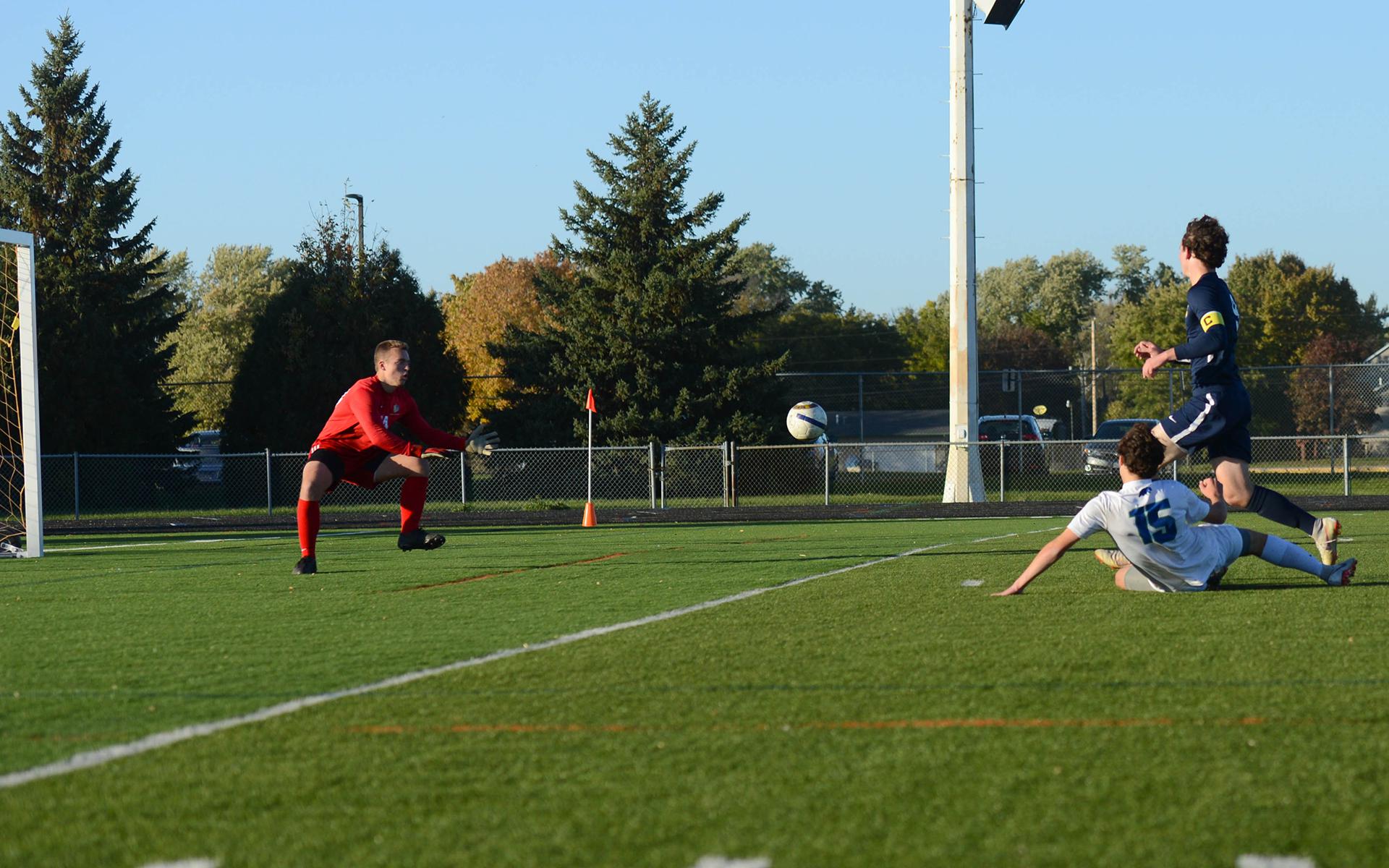 Blake's Jake Lundberg scored on a header with just 1:40 left in regulation to lift the Bears to a 2-1 victory over Totino-Grace in the Class 1A, Section 5 title match at Osseo High School Thursday.

Totino-Grace (14-2-2), ranked No. 1 in the final Class 1A coaches' poll and the section's top seed, suffered its first season loss to a Minnesotan team and saw its chances of repeating as state champion end with the loss.

Jacob Wacek, a senior, scored the lone goal for the Eagles, which came in the first half. 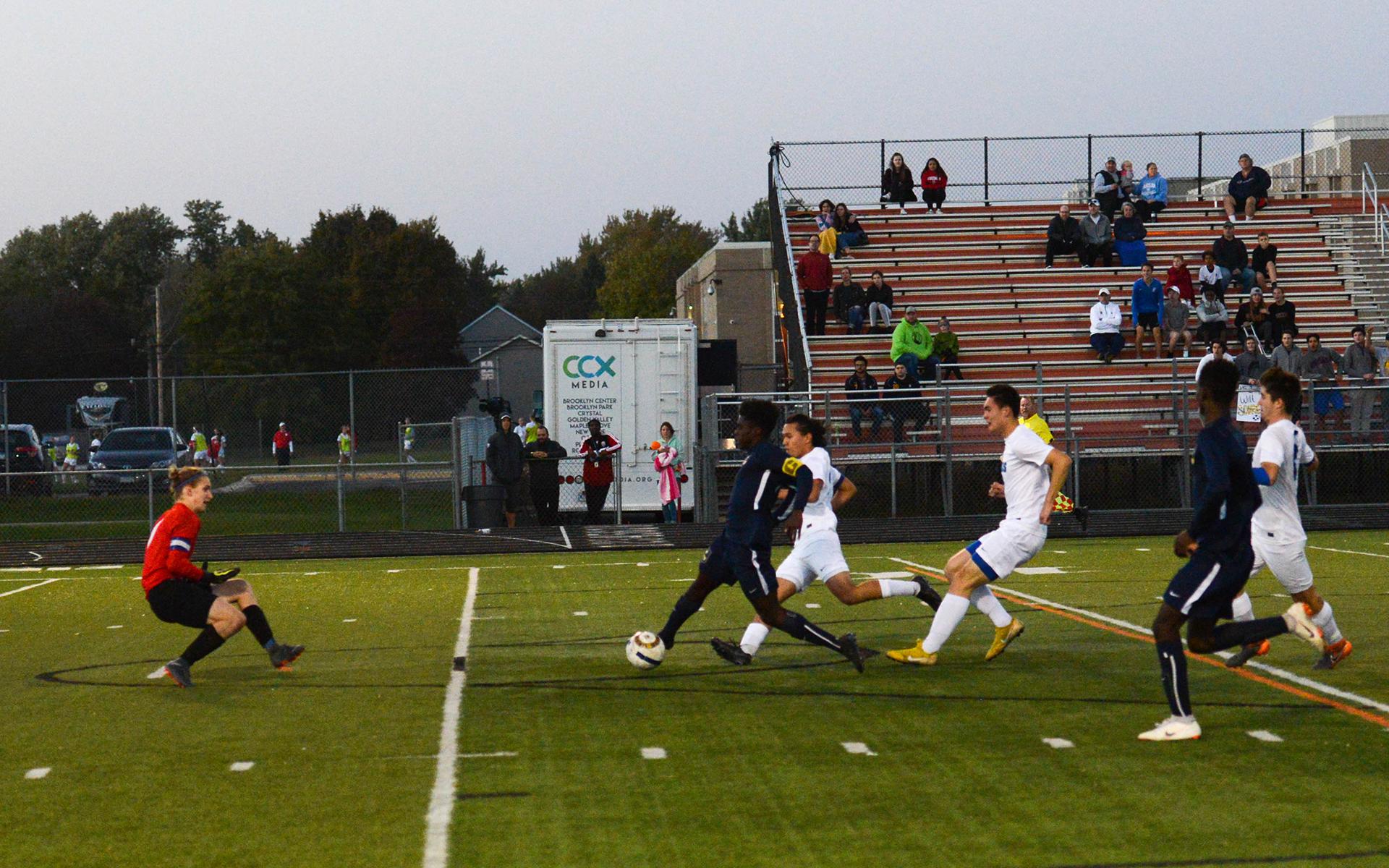