Section matchups, including several Class 2A games on Tuesday, will determine which teams move toward the ultimate goal. 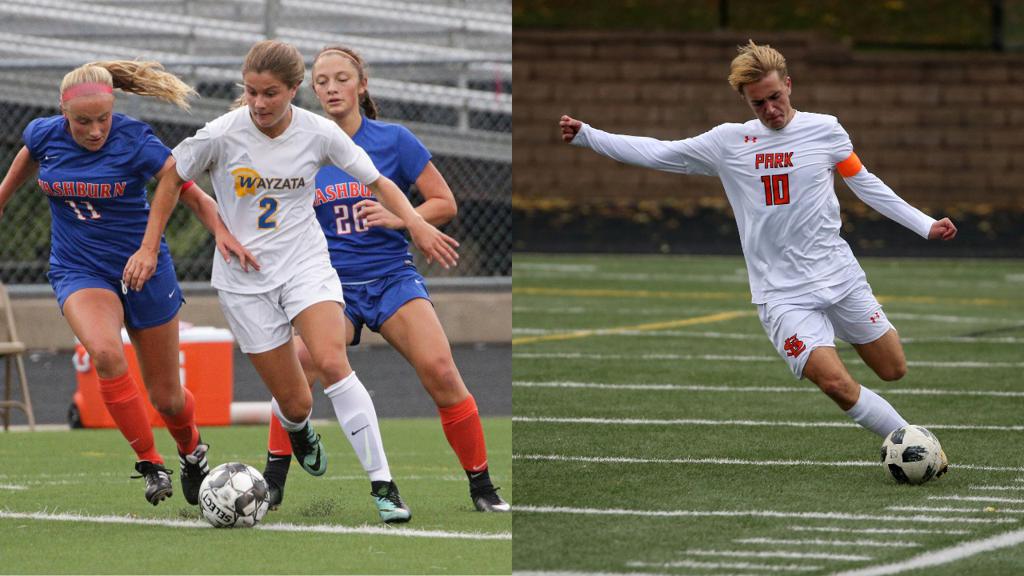 Lily Gilbertson of Wayzata (left, in white) and Zinedine Kroeten of St. Louis Park are among seven players who still have a chance to win a Class 2A championship and a Ms. or Mr. Soccer Award. Photos: Cheryl Myers, SportsEngine

High school soccer reaches its fever pitch Tuesday as 32 teams battle for spots in the Class 2A boys’ and girls’ state tournaments set to begin next week. Here’s a closer look at some of the matchups.

You again?
On the girls’ side, Eagan and Rosemount (Section 3) and Centennial and Maple Grove (Section 5) meet in the finals for a fourth consecutive season. Eagan won last season en route to its third state title in four seasons. Maple Grove also won, reaching its first state tournament and placing second. In Section 7, defending champion Andover faces Blaine for a third consecutive season. Familiarity can be found on the boys’ side with rematches of St. Louis Park and Wayzata (Section 6) and Maple Grove and St. Cloud Tech (Section 8).

Familiarity stays in play
Five of the eight boys’ games and all but one of the girls’ games are rematches of the regular season. That means some closure for teams that played to draws: the St. Louis Park and Wayzata boys (2-2) and the Eagan and Rosemount girls (0-0). Of these 12 games, the higher-seeded team lost to its section final opponent twice: The No. 2 seed Rochester Mayo boys fell 1-0 to No. 4 seed Lakeville North, and the top-seeded East Ridge girls were blanked 2-0 by No. 2 seed Stillwater.

Top-ranked collisions
Five games involve two teams ranked in the top 10 of the final soccer coaches association poll. The Stillwater boys, runner-up last fall, are ranked No. 2 and will play No. 9 East Ridge. Stillwater won 3-0 earlier this season. No. 7 Champlin Park holds an edge over No. 8 Centennial in the polls and on the pitch, having beaten the Cougars 2-1 in overtime. Among girls’ teams, either No. 3 Stillwater or No. 4 East Ridge stays home. A similar fate awaits No. 6 Maple Grove or No. 8 Centennial as well as No. 9 Eden Prairie or No. 10 Minnetonka.

Class 1A roundup
Tuesday features finals in Section 6 while most of the top teams in Class 1A play section semifinal games. In Section 6, the seventh-ranked Orono girls face No. 10 Monticello. The sixth-ranked Holy Family Catholic boys will work to avoid an upset loss to Waconia.
In the semifinals, the No. 1-ranked Totino-Grace boys, led by Mr. Soccer finalist Herbert Endeley, play DeLaSalle in Section 5 and hope to advance to face either No. 2 Breck or No. 4 Blake. Among the girls’ brackets, Section 4 is the toughest. Top-ranked Hill-Murray must pass Cristo Rey Jesuit, led by Ms. Soccer finalist Brenda Vargas, for a possible shot at No. 3 Mahtomedi.