An early Lightning own goal gave the Minutemen a lead that they maintained to earn a gritty victory and a trip to state. 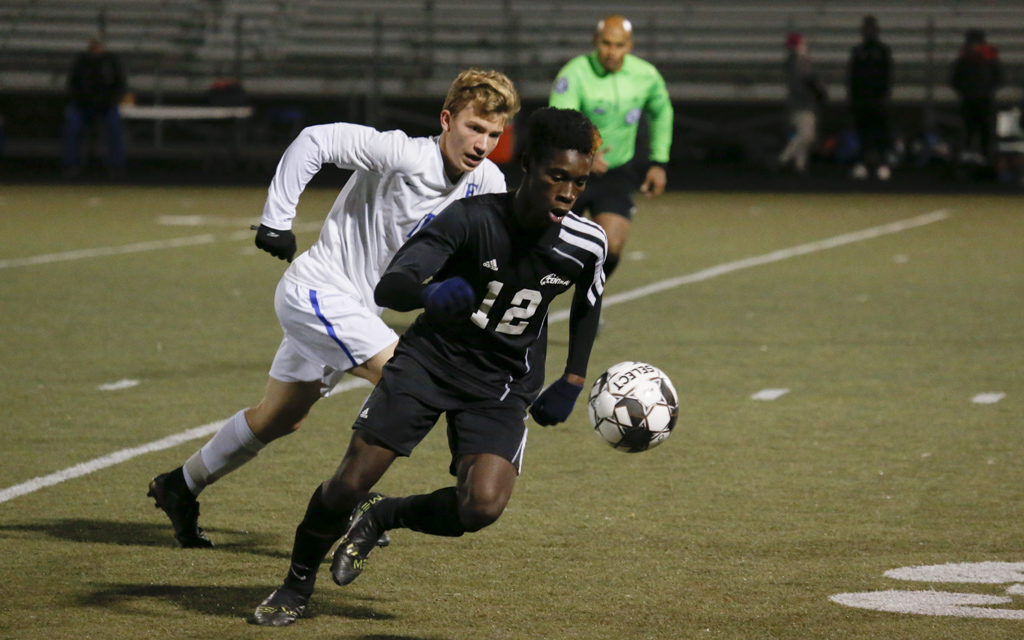 St. Paul Central junior Yasin N'da pushes the ball upfield against Eastview in the Class 2A, Section 3 championship. The Minutemen defeated the Lightning 1-0 to advance to the state tournament. Photo by Jeff Lawler, SportsEngine

There was a time when St. Paul public schools didn’t play in the state soccer tournament.

St. Paul Central won a gritty 1-0 Class 2A, Section 3 title game against Eastview on Tuesday night. The top-seeded Minutemen went up in the seventh minute on a Lightning own-goal, then held on the rest of the way for their first section crown in a decade and a half.

Some of the players on Central’s roster weren’t born the last time the Minutemen played in the state tournament. And Central’s been close to state recently, losing section finals in 2014, ‘15 and ‘16, before falling in an upset to Rosemount in the first round last year.

“It means so much,” senior Aiden Cavanaugh said. “We’ve been through a lot these last couple years. We took an early exit last year, which was really disappointing. Things weren’t going our way. This year, we just came in with the mindset that we were going to give it our all every day, every practice. It’s just such a great group of guys, I’m so happy to share this experience with them.”

The Minutemen were the only St. Paul public school to make it to state in the 2000s. This decade has been better for the St. Paul City Conference. Humboldt played in the Class 1A state tournament in 2011, and Como Park went five straight years, from 2012-16. Harding won a section title last year.

Now, the school that started it is back, and the St. Paul City Conference is on an eight-year streak of state appearances.

“I think it’s a reflection of what’s going on in this conference,” Albornoz said. “We have great coaches, [Alex] Zadini in Highland, [Matt] Osborne in Humboldt, [Jonah] Fields in Como. So you see the city, most of the teams in our conference are single-A, but I don’t think that makes them less. Those are some really strong teams.”

Central, the only Class 2A team in the conference to play at state, improved to 17-0-1 this season with the section title win. The Minutemen were ranked No. 5 in the final state coaches’ poll, and had what was officially a 3-3 draw with top-ranked Stillwater, but they won on penalty kicks in a season-opening tournament.

But being a city school often means being overlooked, for the most part, in the Twin Cities soccer community.

“It’s a tough conference, and I don’t think people realize how hard it is,” Cavanaugh said. “We were really happy with going undefeated this year, because it’s so easy to drop one game to really any team in the conference.”

The hope now, Albornoz said, is to get some more attention for the kids.

“It feels good being able to go out there and show, hey, here’s what’s going on in the city; why don’t you look at what we’re doing?” Albornoz said. “Hopefully we can get some of the kids scholarships and we can get them seen at by colleges. Because that’s the real ultimate goal, right?”

The theme of the season has been redemption for Central. From last year’s early section exit to the losses in the finals the last couple of years before that, the Minutemen want to show they won’t be overlooked any longer. Playing at state should help that.

“It just feels so good to put the city on the map, show everybody,” Cavanaugh said. 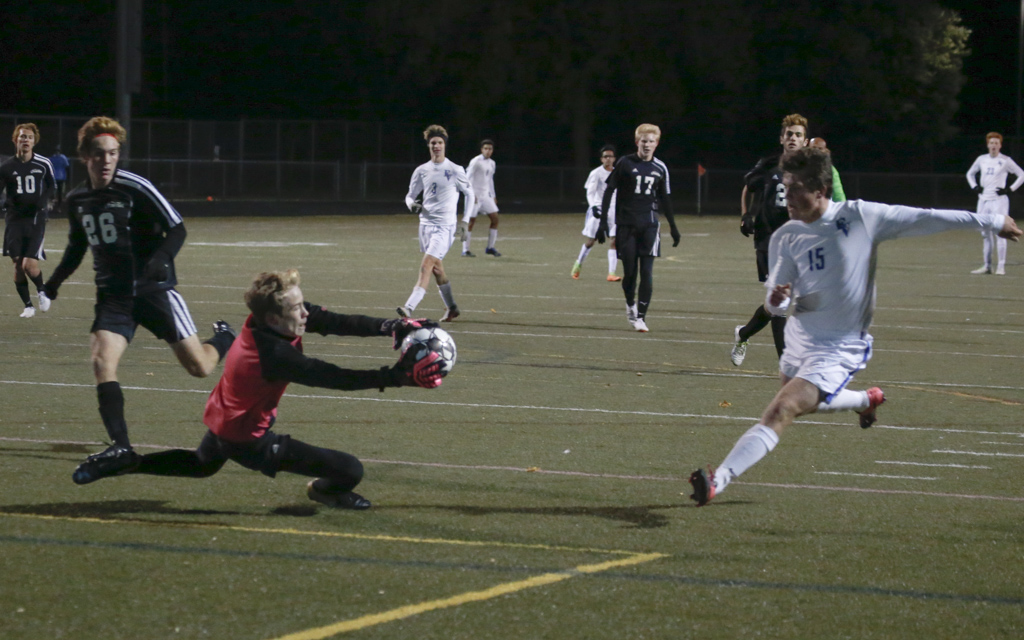 St. Paul Central goalkeeper Owen Brooks dives to make a save in Tuesday night's Class 2A, Section 3 championship against Eastview. The Minutemen held on to defeat the Lightning 1-0. Photo by Jeff Lawler, SportsEngine

This one was gritty for St. Paul Central, but the result was what mattered.

The Minutemen (17-0-1), ranked No. 5 in the season's final Class 2A coaches' poll, spent much of the game sitting back and looking to counter, especially after getting an early lead.

The Minutemen went ahead in the seventh minute when a ball crossed in was knocked into the Lightning's net on a clearance attempt by Eastview defender Suyash Kalra. The goal was credited to St. Paul Central’s Max Hand.

Eastview (14-5) controlled possession for much of the first half, but had just one shot on goal to show for it. The Lightning had chances in the second half, but couldn’t get many opportunities.

The Minutemen secure a trip to state for the first time since 2003 and will be only their second overall appearance. 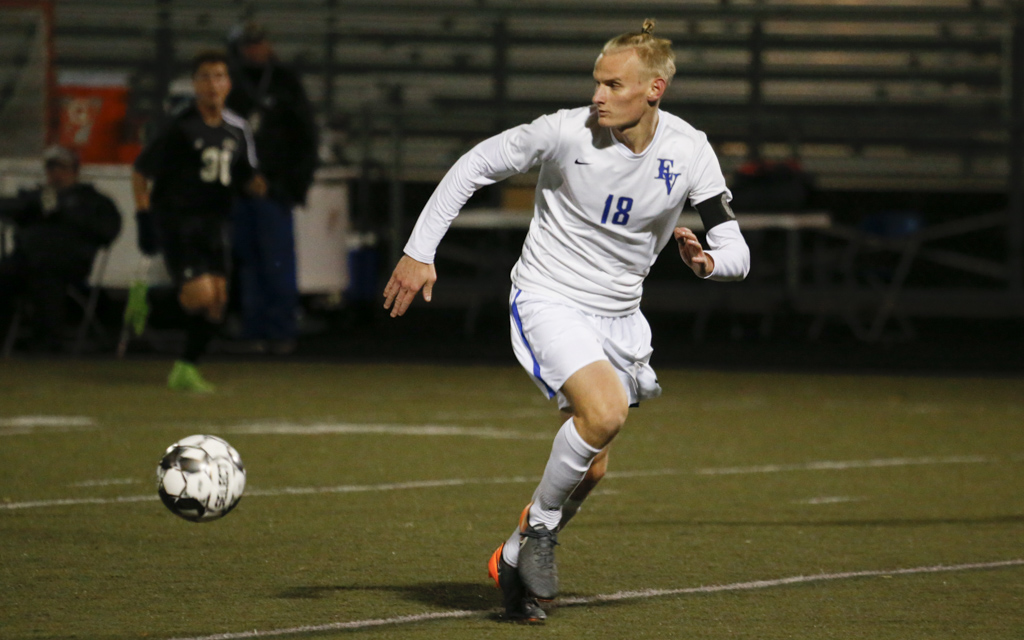 Eastview senior Gus Walney chases down a loose ball against St. Paul Central. The Lightning fell to the Minutemen 1-0 in the Class 2A, Section 3 Final in Burnsville. Photo by Jeff Lawler, SportsEngine