William Francis netted the game-winning goal for the Greyhounds. 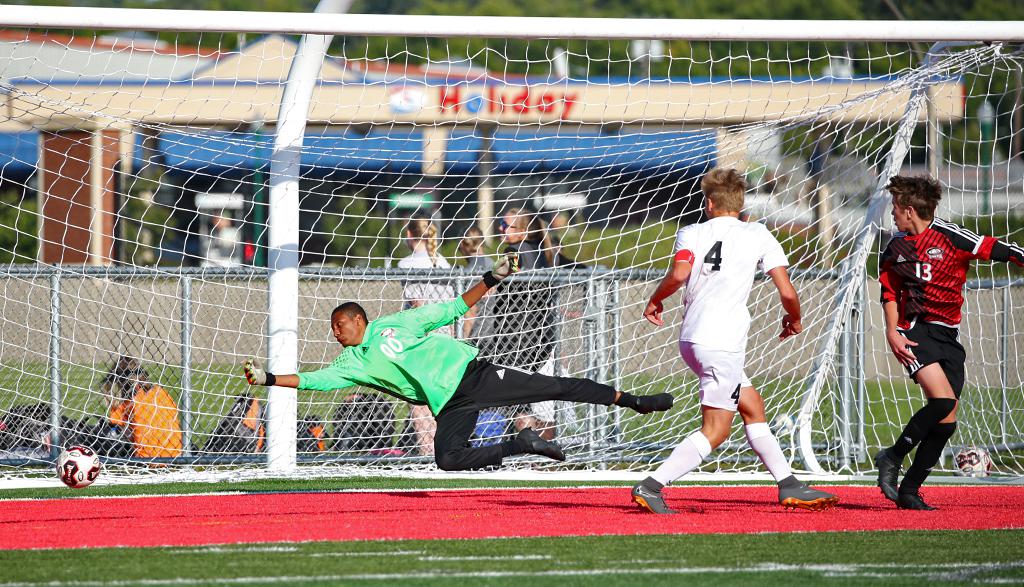 Saturday’s match between Duluth East and North St. Paul appeared to be going down as a draw. Both teams kept the game level at 1-1 through regulation and overtime, however, the Greyhounds had other plans as the second overtime period began. 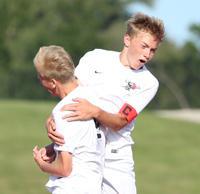 With a little over 1 minute left in the period, the Greyhounds, ranked fourth in the Class 2A coaches’ poll, found the net at North St. Paul High School. Seth Hoffman played a cross from the right side of the field into the box, and William Francis beat the defender to the ball, heading it into the back of the net to win 2-1.

Francis said scoring a goal in moments like that is all he can hope for.

“It felt great,” Francis said. “As a forward you want one thing. That’s to win [with a] game winner in overtime. It’s really the best feeling.”

Duluth East coach Corey Bachand said he was not surprised Francis was the player who took the game for them, knowing what the senior is capable of on the attack.

Francis looked threatening going forward the entire match and it seemed it was only a matter of time before he put one in.

“When the ball is on his foot he is dangerous,” Bachand said. “If he’s within 20 yards, if he has a clear shot at that net, it’s a nice percentage of goals. It’s a blessing to have somebody like that. It makes our team so much better up on top.”

Entering his final season, Francis has taken on new responsibilities this season.

“[My role is to] be a leader, help people get better every time they get on the field, and score goals,” Francis said.

His movement with and without the ball made his presence known to the Polars early in the match as the Greyhounds (6-0-1) made great use of the forward’s speed on the counter attack.

The duo of Francis and Hoffman forced the hand of North St. Paul (2-2-0) coach Justin Oliver to make adjustments to his defense.

“Our center back Anthony Ortiz did really, really well making three really good one-versus-one stops against him,” Oliver said. “We were defending three versus two on him, and staying a number up, but [Francis and Hoffman] were causing us a ton of problems on the counter. We had to drop another person back [to stop the counter].”

Neither team’s goalkeeper was tested much early in the game. For the Greyhounds, Hasler made four saves. Doug Habte stopped three shots for the Polars. 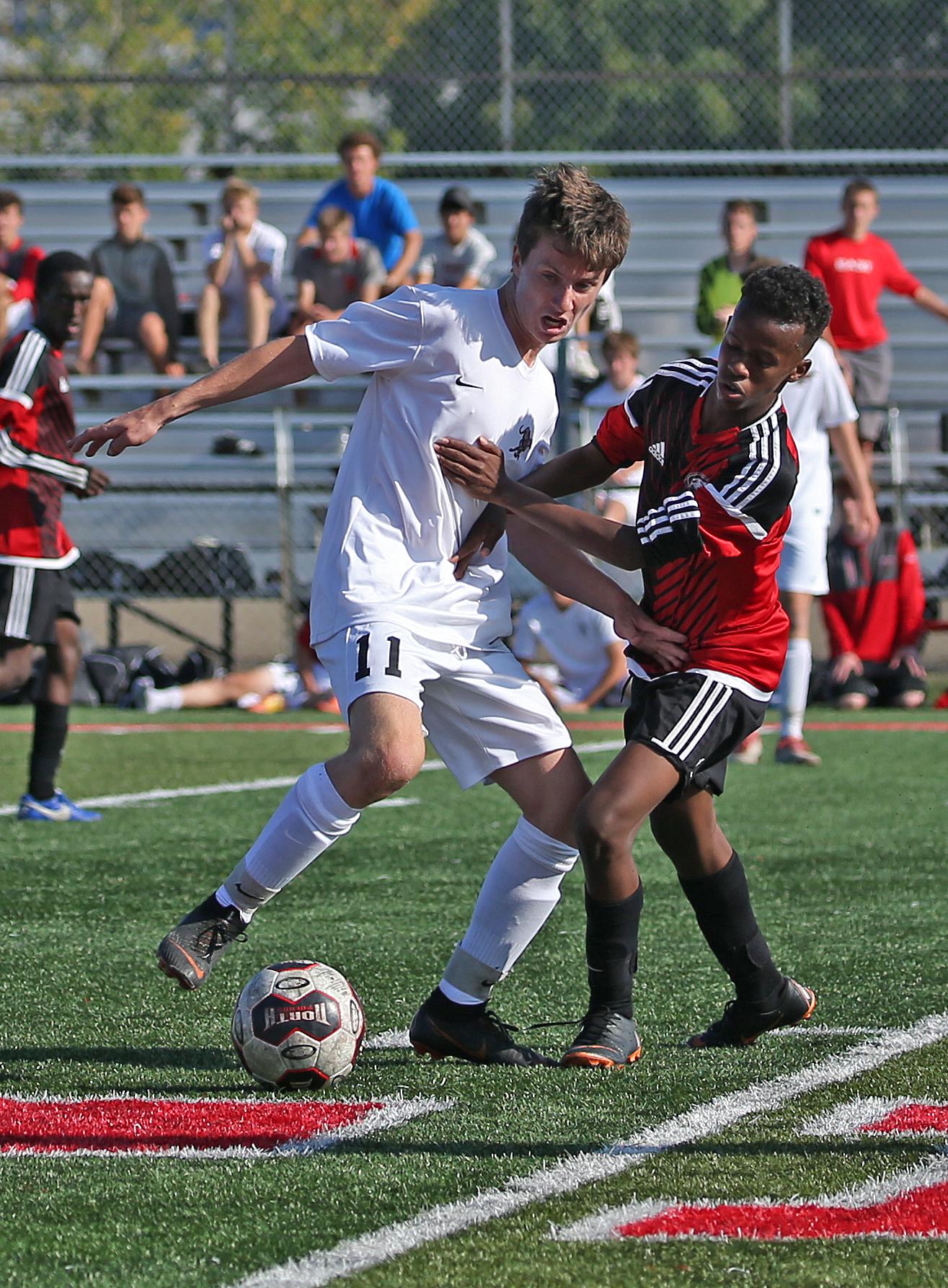 Midfielder Seth Hoffman (11) works the ball around defender Jebril Mohammed. Hoffman connected on a penalty kick in the first half to tie the score at one. Photo by Cheryl Myers, SportsEngine

The Polars (2-2, 1-0) opened up the scoring 18 minutes in when Ahmad Jalloh stole the ball from a defender in front of him and lobbed a shot over Greyhounds goalie Oliver Hasler.

Duluth East, ranked No. 4 in Class 2A by the coaches’ association, was given a penalty kick from a handball in the box. Seth Hoffman converted the spot kick to tie the match 1-1.

The Greyhounds (6-0-1) held the edge in possession time in the second half, but were not able to take advantage of their opportunities.

Neither team’s goalkeeper was tested much early in the game. For the Greyhounds, Hasler made four saves. Doug Habte stopped three shots for the Polars.

Both teams made a late push to win in regulation, but were unable to capitalize on their chances, resulting in overtime. 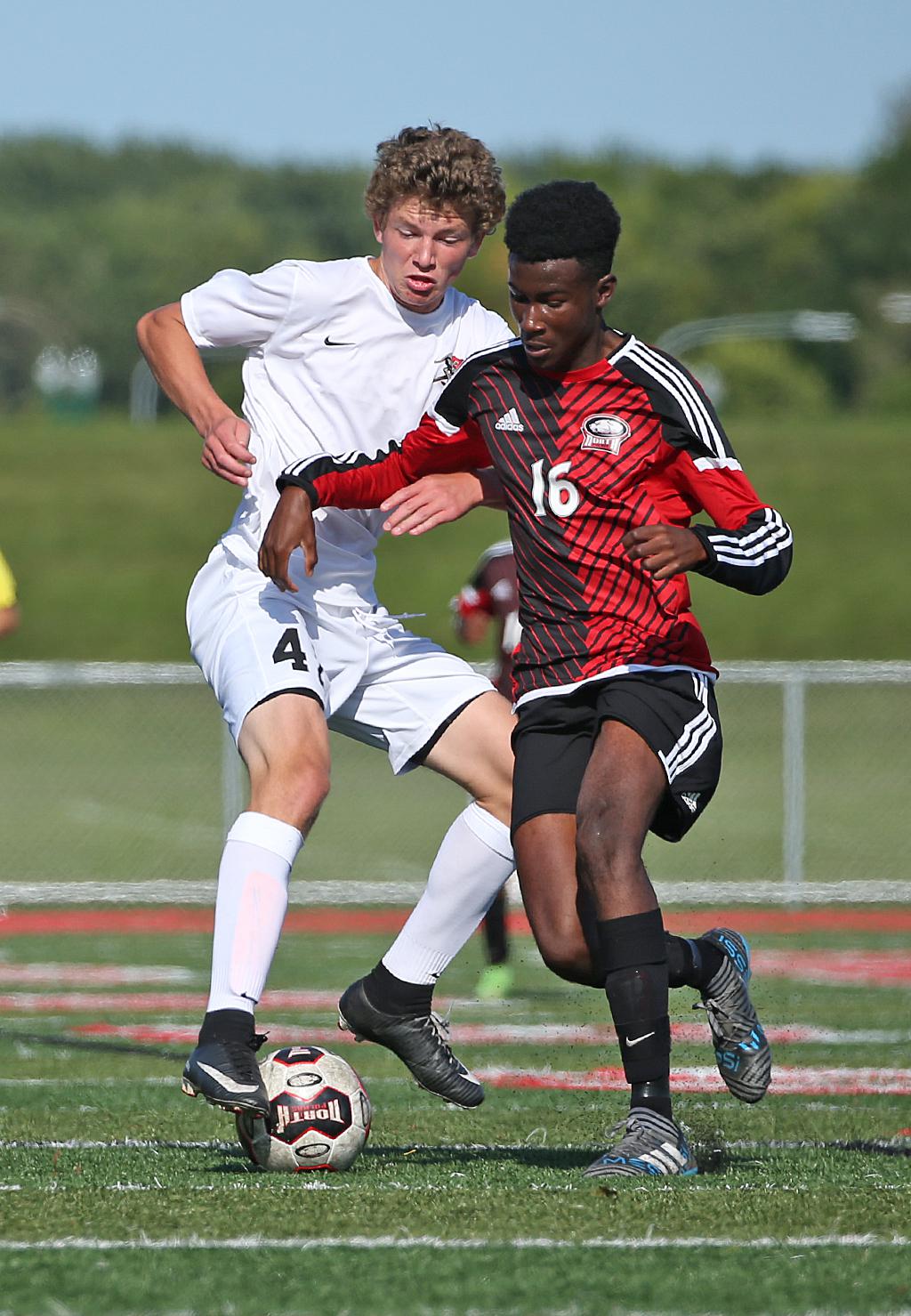 Ahmad Jalloh (16) battles for possession at midfield with Zach Lanigan. Jalloh scored the Polars' only goal in a 2-1 overtime loss to the Greyhounds at Polar Field in North St. Paul. Photo by Cheryl Myers, SportsEngine