What a way to end it! Eagan scores with 6 seconds left to win state title

Ellen Pagois scored the winner as the Wildcats defeated Maple Grove 2-1 for the Class 2A championship. 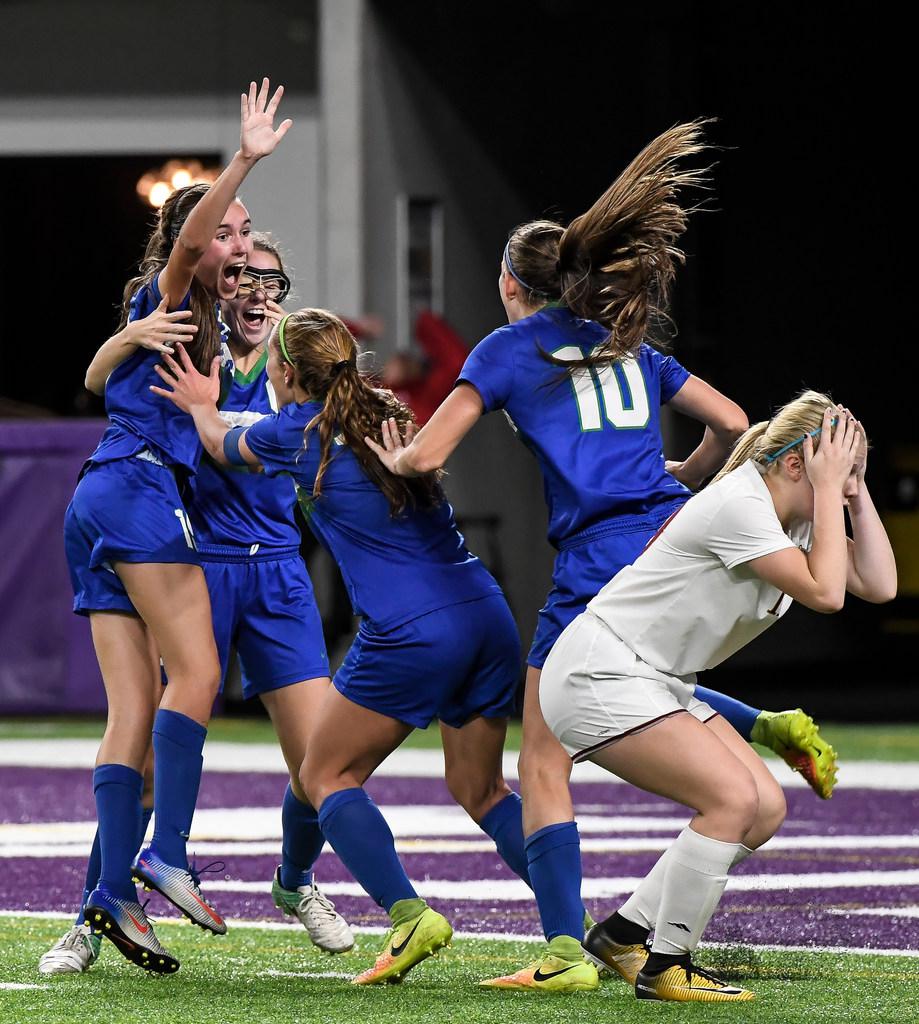 Six seconds left in the state championship game – what a time for a player’s first goal of the season.

That’s just what Eagan junior midfielder Ellen Pagois accomplished in a 2-1 victory against Maple Grove on Thursday to clinch the Wildcats’ third Class 2A girls’ soccer title in four seasons.

With about 10 seconds on the clock, junior Grace Sjoberg hustled to take a corner kick. Overtime? No. 5 seed Eagan (17-2-2) had no time for that. Sjoberg, who scored Eagan’s overtime winner in the quarterfinals against Edina, booted her cross into the Maple Grove goal box hoping for a deflection.

Pagois, who started in Thursday’s game because a teammate was injured, got the back of her head on the ball and sent it home.

“I made sure I got my head over the ball,” Pagois said. “I never thought I’d even set foot on a varsity field. This is insane.”

Eagan goaltender Megan Plaschko, one of four captains who played on the Wildcats’ 2015 championship team, said her team’s late-game focus is a product of daily repetition.

“In practice, if we don’t go to the last minute we have to run,” Plaschko said. “Some other teams might take a breath and be like, ‘Six seconds left, let’s just go into OT.’ But our team knows that’s more than enough time for a goal.”

“That’s just something we’re all going to wish we had back – that chance,” Haakenson said.

No. 3 Maple Grove (19-3), playing in its first state tournament, went ahead 1-0 in the 18th minute on a goal from Haakenson, a Ms. Soccer recipient. Eagan junior Jessica Van Wyk scored in the 32nd minute to even the score.

Plaschko made a tremendous diving save with about 13 minutes left to preserve the 1-1 tie, ruining Maple Grove’s plans for a go-ahead goal.

“Credit to their goalie,” Maple Grove coach Ben LeVahn said. “She robbed us.”

Ellen Pagois scored in stunning fashion, getting a ball through with six seconds left as Eagan defeated Maple Grove 2-1 for the Class 2A girls’ soccer state title.

No. 3 Maple Grove (19-3), playing in its first state tournament went ahead 1-0 in the 18th minute on a goal from Ms. Soccer recipient and Star Tribune Metro Player of the Year Meredith Haakenson.

Jessica Van Wyk scored for Eagan in the 32nd minute to tie the game.

Check back later for more.