Grace Kruger made a wish before overtime and saw it realized when her corner kick resulted in the game-winner. 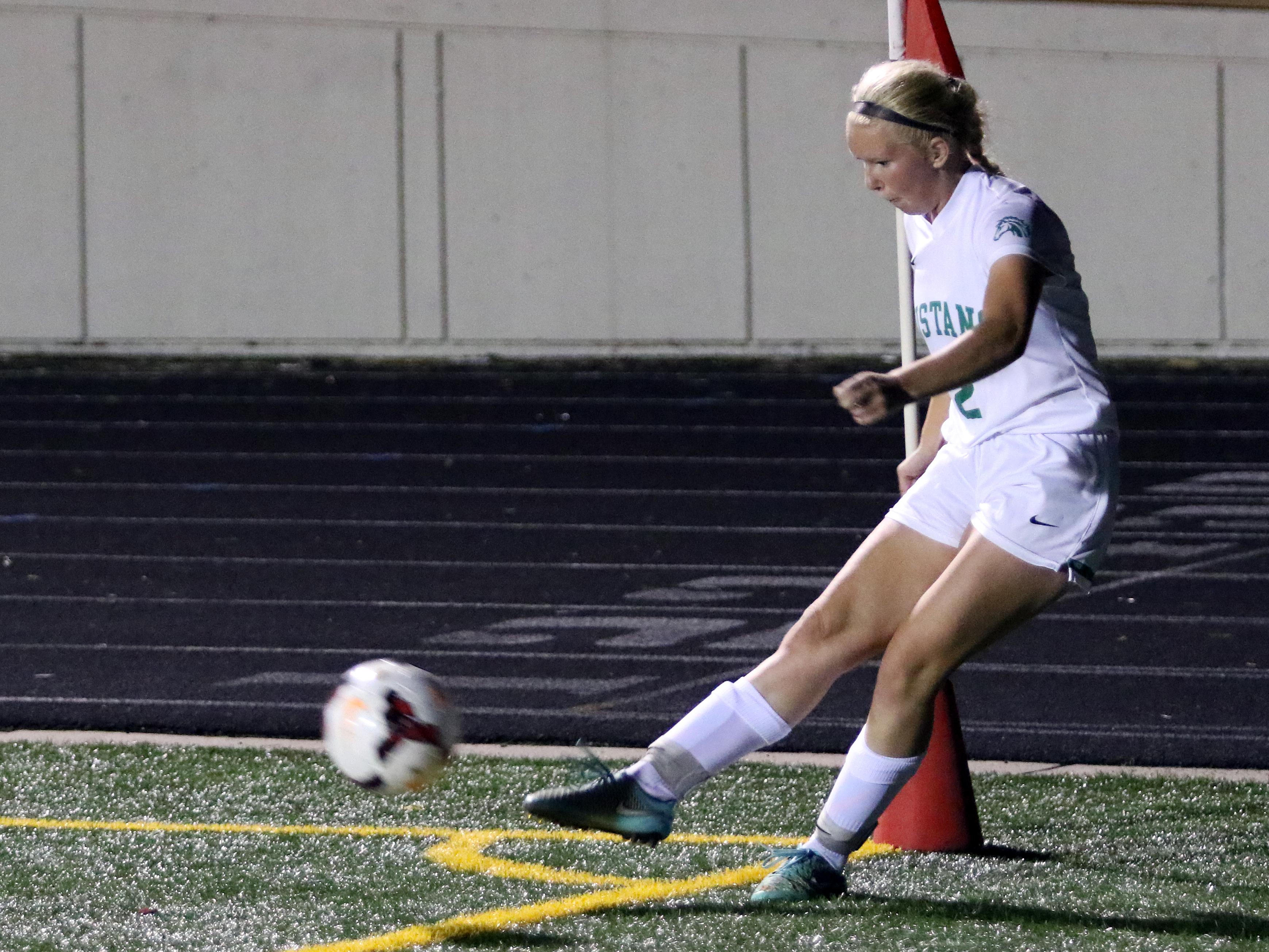 Grace Kruger's assist off of a corner kick in the second minute of overtime prove to be enough for Mounds View to defeat East Ridge 3-2 on Tuesday night. Photo by Cheryl Myers, SportsEngine

Kruger led Mounds View in prayer before entering overtime in its match against Suburban East Conference rival East Ridge on Tuesday night, hoping for some good fortune for a team that's had its season marred by injuries.

“I was nervous for them because (corner’s) have to be perfectly placed,” Kruger said.

Kruger’s prayer may have calmed some nerves for her teammates as Mary Wilhelmy rose above a pack of players and headed the game-winning goal in the 82nd minute of play, boosting the Mustangs to a 3-2 victory over the Raptors at Mounds View High School.

“After that last one I said, ‘Ok. Here we go,’ and when Mary headed it in, so much joy rushed through my body,” Kruger said of her eighth corner kick of the night. “Our team finishes well on set pieces, so to win off that feels amazing.”

Mounds View (9-1-1, 4-0-0) was unranked entering the season, a result of graduating eight seniors who led the Mustangs through an unbeaten regular season and to a fourth-place finish at the Class 2A state tournament. However, the team has risen to the third spot on the Class 2A coaches’ poll.

Mustangs coach Katelynn Fast knew the No. 4-2A Raptors (6-3-1, 1-2-0) would be the team’s toughest test this season, saying her team hadn’t proved itself entering Tuesday’s matchup.

“We joked a little bit that (coaches) in the state don’t really know who we are giving us these rankings,” Fast said. “East Ridge really proved -- to us as coaches -- where our team is going, and now (the girls) believe in themselves, too.”

Both programs entered the game boasting two of the state's stingiest defenses.

East Ridge had allowed just three goals all season while Mounds View's total was five, and neither had given up multiple goals to an opponent.

And for the first half, both teams looked stalwart in stopping all scoring chances.

Mounds View's Shania Fleming scored in the 55th minute, and it looked as if the game would be a repeat of last year’s 1-0 decision.

East Ridge leveled the score after a free kick from Emily Bunnell with 11 minutes left in regulation.

Emma Bangert then put Mounds View ahead on a fast-break goal set up by a through ball from Elle Conlin with five minutes remaining.

“We blinked and they scored, but we knew we wanted to get it back,” Kruger said.

Despite the late defensive breakdown, Kruger said Tuesday's performance was Mounds Views’ best game of the season because the fought through adversity.

“This was our first game where we actually played like a family and a team,” she added.

Both teams compete in Class 2A, Section 4, and Fast said they are bound to meet again.

Kruger, a member of a 16-player junior class, wants to prove that a varsity team with 11 newcomers can still compete for a section championship.

“We want to play at (U.S. Bank Stadium) and prove to everyone that even though we don’t have a lot of seniors, we can do it,” Kruger said. 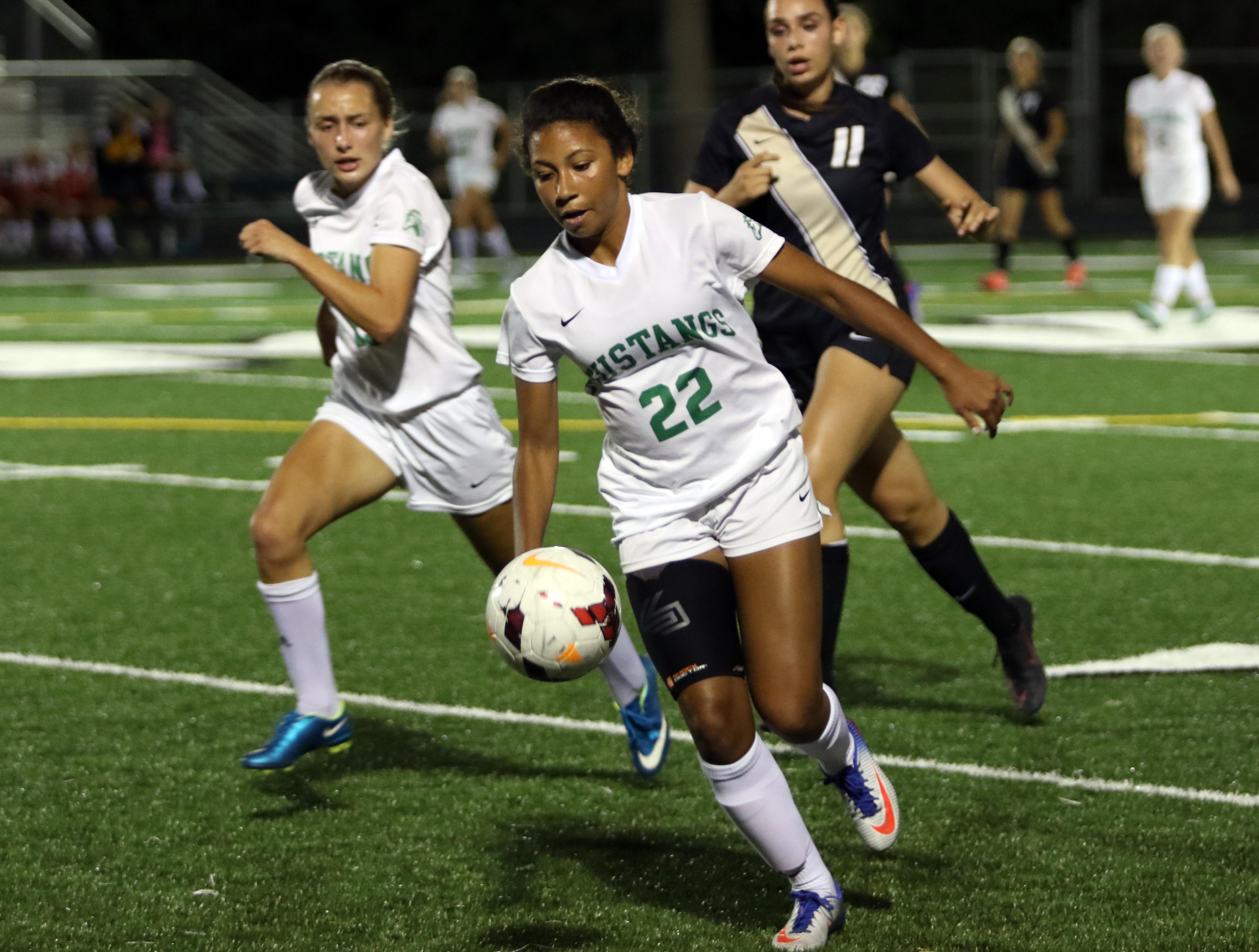 Junior Shania Fleming (22) opened the scoring for the Mustangs in their victory over the Raptors on Tuesday night. Photo by Cheryl Myers, SportsEngine

Senior Mary Wilhelmy scored the game-winning goal off a corner kick from Grace Kruger in the second minute of overtime to boost Mounds View to a 3-2 home victory over East Ridge Tuesday night.

Kruger sent cross into the six-meter box, where Wilhelmy rose above the crowd and headed the ball to the back of the net. 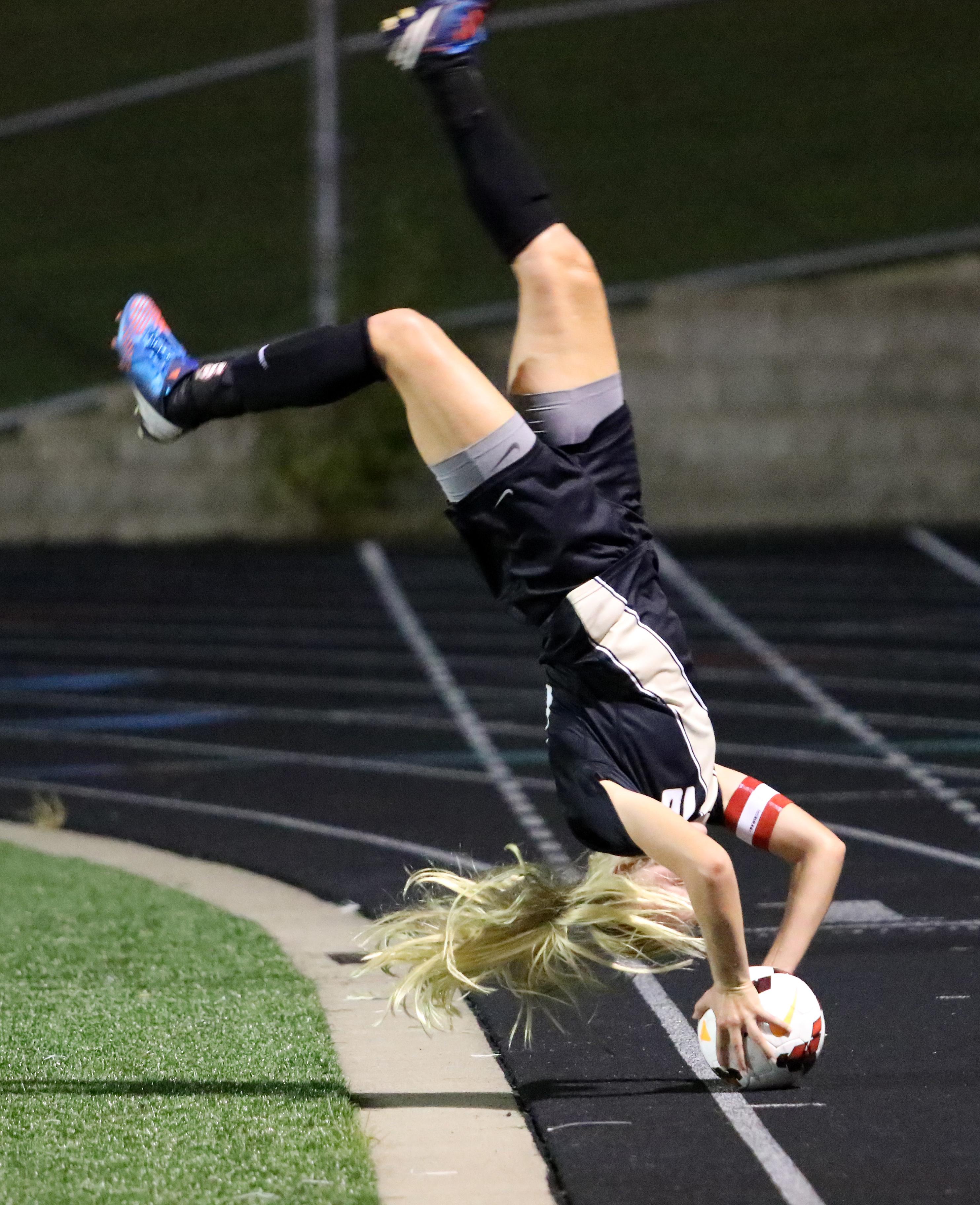