The Spartans used a flurry of goals to beat the Red Knights on Thursday. 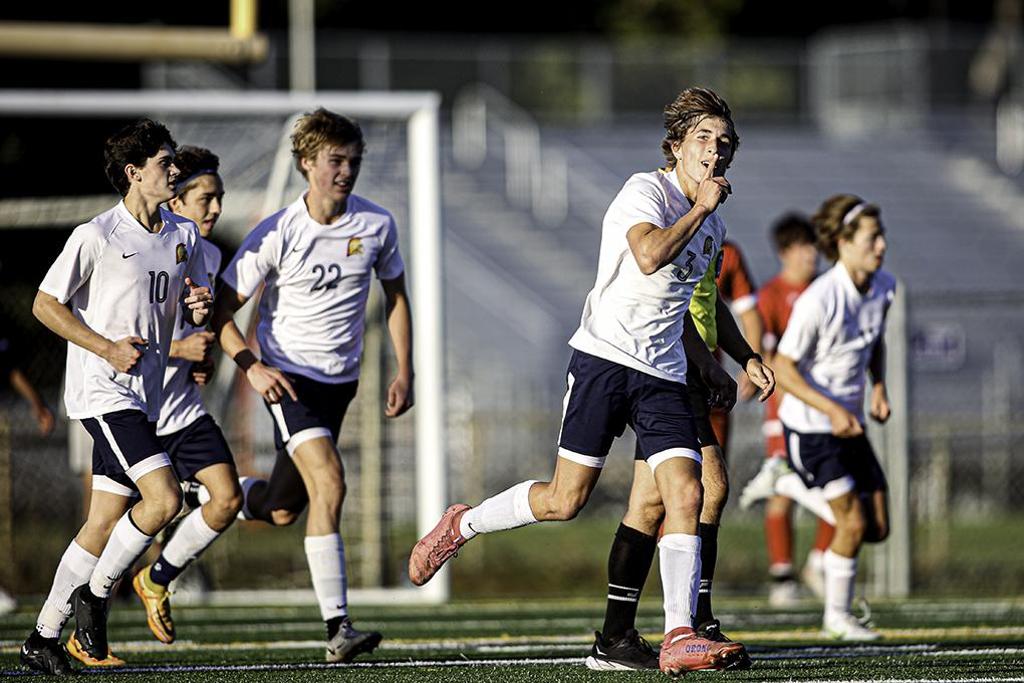 Orono's Franklin Schwendimann (3) motions to fans after scoring late in the first half to give his team a 3-2 lead. Photo by Mark Hvidsten, SportsEngine

Franklin Schwendimann isn't used to playing from behind. In 33 games over the past two seasons, Schwendimann's Orono squad has lost just once.

But that doesn't mean the senior midfielder doesn't know how to handle the situation. His heads-up play, calm demeanor and leadership helped Orono, sitting at No. 1 in the latest Class 2A Minnesota Coaches Association rankings, to a 4-2 come-from-behind victory Thursday at Benilde-St. Margaret's. 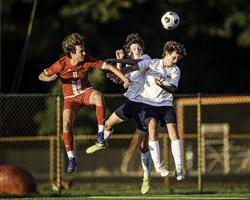 Despite surrendering half as many goals as they had previously allowed in the season's first 10 games, the Spartans (11-0, 5-0) found a way to win in an important conference game. Benilde-St. Margaret's (6-4-1, 3-3), ranked seventh in Class 2A, largely controlled the first half but did not score in the second half.

The game turned in the closing seconds of the first half when Schwendimann, who scored two goals to boost his team-leading total to 12, made a call for a play on a corner kick the team had not put into play this season. When no Benilde defender came out to shadow junior Owen Hirt just feet away from the corner, Schwendimann tapped the ball to Hirt and called for a pass as he circled behind his teammate. With an open shot on net, Schwendimann curled a high-arching shot into the upper right corner of the Knights' goal for a 3-2 Orono lead.

"That third goal really did take some of the wind out of our sails," Benilde-St. Margaret's coach Bret Day said. "We kind of disappeared in the second half."

The Knights' approach to start the game was something the Spartans weren't ready for. Benilde-St. Margaret's was the more aggressive and more intense team until that corner kick. Day said the failure to put a defender out on the second Orono player in the corner was one of a number of "mental mistakes" that spoiled the Knights' hopes.

Knights senior Aidan Fischer scored twice in less than 2 minutes to give his team a 2-1 lead. Both goals came off corner kicks, the second with 15:41 into the first half. Orono managed to tie the game when junior Lisle Cherwien scored with 23 minutes to play in the half.

"We weren't supposed to be one of the top teams at the beginning of the season," Schwendimann said. "But we connect, we have a good chemistry. ... Honestly, I think we're even better than last year because of how hard we practice and play and how badly we want (to win)."

That desire showed on Thursday when the Spartans took initiative into the second half, taking back control of the game, holding the ball for most of the half and keeping the Knights off the scoreboard. 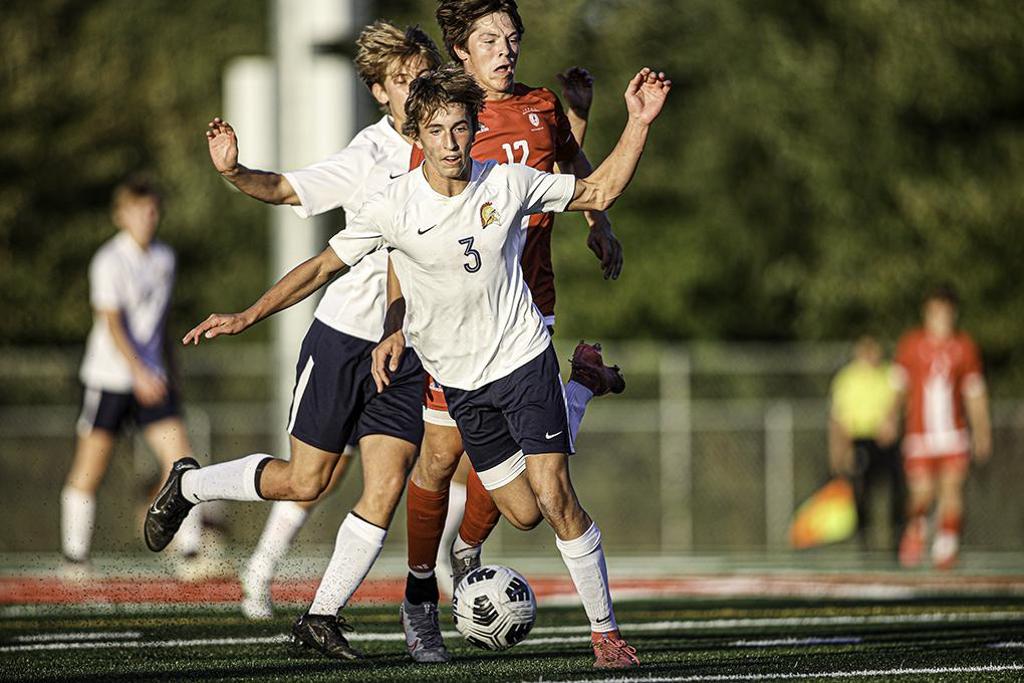 Franklin Schwindimann (3) tried to step out of a maze of feet to bring the ball up the field. Schwindimann scored two goals in Orono's 4-2 victory. Photo by Mark Hvidsten, SportsEngine

Senior midfielder Franklin Schwendimann scored twice, including on a play off a corner kick with 1:37 left in the first half, and defending Class 2A state champion Orono remained unbeaten with a 4-2 victory Thursday at Benilde-St. Margaret's.

Schwendimann got the game's first goal on a penalty kick 5 minutes, 12 seconds in but Benilde-St. Margaret's responded with two goals over the next 10 minutes to put the Spartans (11-0, 5-0), the top-ranked team in Class 2A by the Minnesota coaches' association, in a position they rarely find themselves — behind. But junior Lisle Cherwien tied the game at 2-2 with 17 minutes left in the half to set up Schwendimann's score in the closing seconds of the half.

Schwendimann's second goal, which proved to be the game-winner, came when Benilde-St. Margaret's defenders left two players alone in the corner. Schwendimann dropped the ball to junior Owen Hirt, who passed back to Schwendimann for an uncontested boot into the upper right corner of the Knights' net for a 3-2 lead. 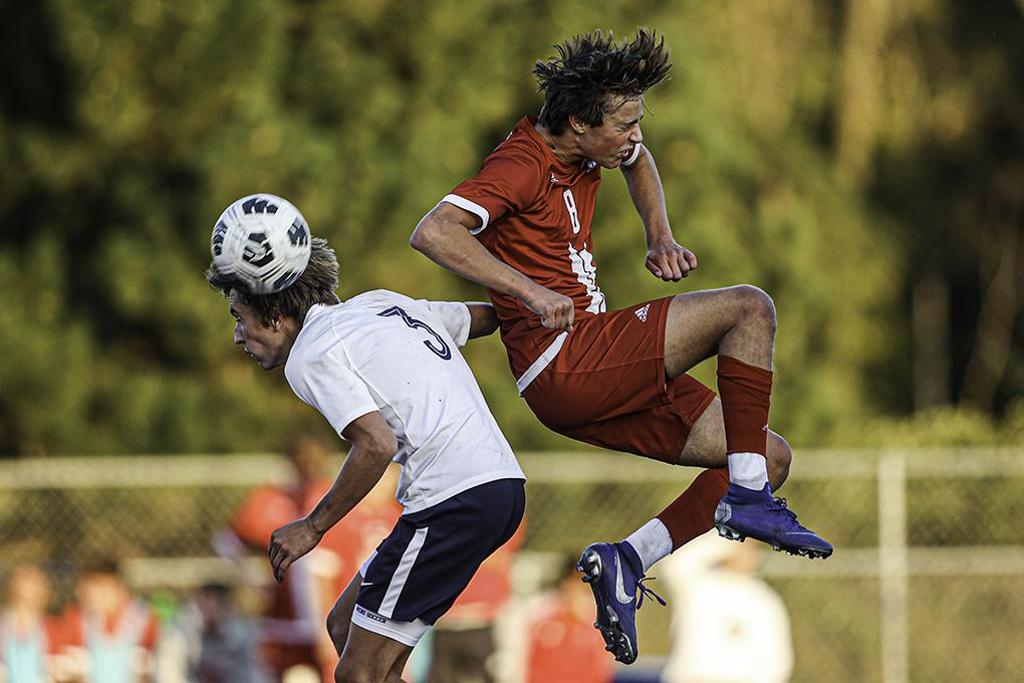 Benilde-St. Margaret's junior Ben Dietzen (8) and Orono's Franklin Schwindimann jousted for control of a goal kick in the second half. Photo by Mark Hvidsten, SportsEngine