The Ponies used an early lead to get ahead of the Royals and secure the victory. 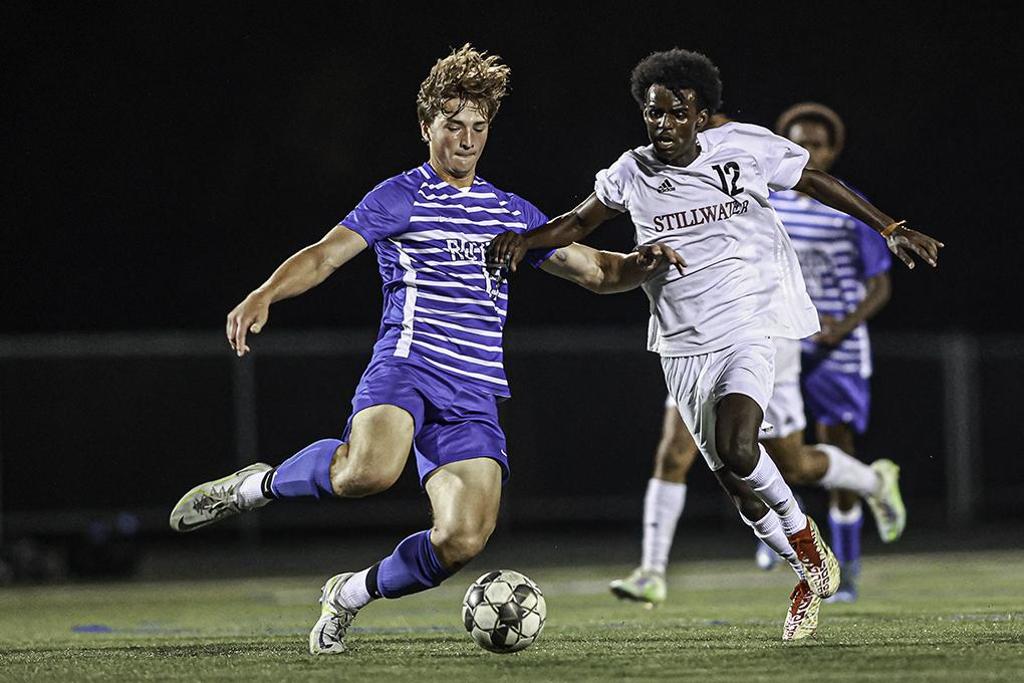 Coming into Wednesday’s battle against Woodbury, Stillwater had averaged five goals a game during its 8-0 start to the season.

The Ponies (9-0-0, 3-0-0) fell short of reaching that average in a 3-1 win over a conference and section rival, but tonight was all about the result. 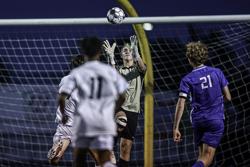 Taddess scored two goals for the Ponies, which were both similarly set up.

Just under eight minutes into the game, Liam Moreira played a long ball over the top of the Woodbury defense that Taddess was able to slot home.

“His ability to spot that pass is just so good,” Stillwater head coach Jake Smothers said of Moreira.

Smothers pointed out that Moreira — a forward who was credited with the second goal of the night for the Ponies on a frantic corner — was asked to play deeper in the midfield in this game because the Royals (3-1-2, 1-1-1) were overrunning the Ponies in that portion of the field.

Elijah Fearing scored in between those two Stillwater goals on what Smothers described as a “miscommunication between the goalkeeper and the center back.” That was the fifth goal the Ponies have conceded this season, and the first they’ve given up since a 4-3 win over Eastview on Aug. 30.

Taddess answered with his second goal of the game under three minutes into the second half on a rebound to seal it.

Woodbury goalkeeper Eddie Puglisi couldn’t keep that shot out, but he was one of the main reasons why the royals stayed in the game. He made seven saves, including stopping Moreira from the penalty spot. The Ponies also had three shots hit the crossbar.

After the game, Smothers said the 3-1 win was a fair result against opposition as strong as Woodbury.

“What we wanted to get out of this game was how well can we defend, how well can we chance create against a team with Woodbury’s caliber and I think we come away feeling pretty good about it,” he said.

These two teams both came into the game undefeated and both ranked in the top five of the coaches’ association Class 3A rankings. Stillwater remains undefeated, but there’s a chance they’ll meet again in the Class 3A, Section 4 tournament. Stillwater came away with a 3-2 overtime victory in the section final last year.

Sections are still over a month away, but Taddess made it clear his team is ready for any team they’ll face this postseason.

“I definitely think this is the second best team in our section,” Taddess said of Woodbury. ”We’re definitely waiting for the competition in sections and state soon, but I love our boys and we’re ready for anyone who comes in our way.” 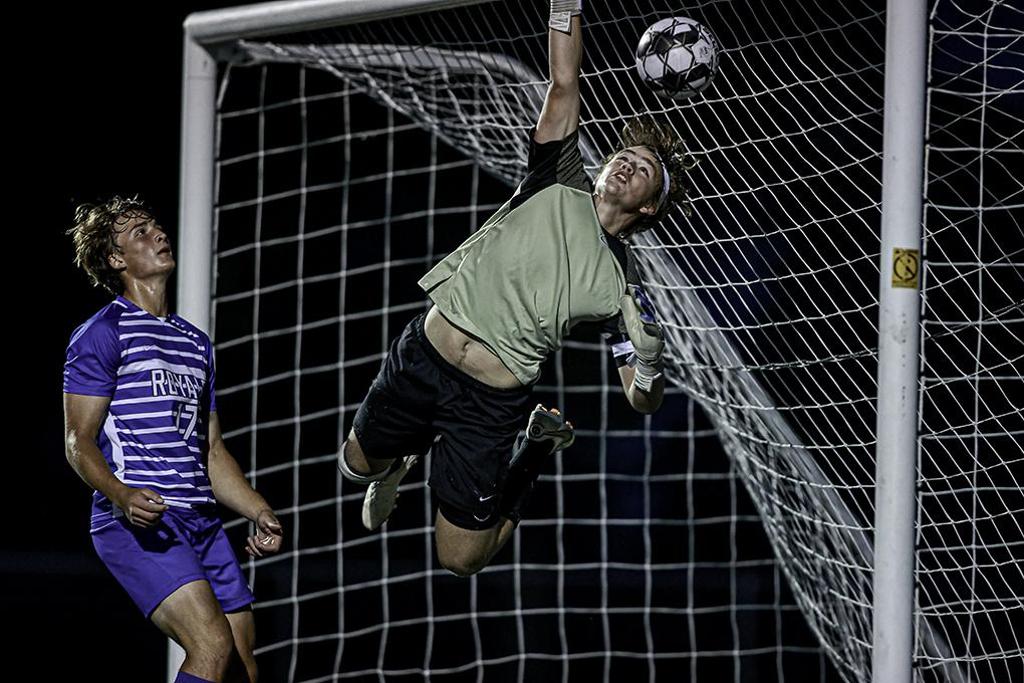 Despite his effort, Woodbury goaltender Eddie Puglisi couldn't keep this ball off the foot of Stillwater's Liam Moreira from finding its way into the goal. It gave the Ponies a 2-1 lead in a game Stillwater won 3-1. Photo by Mark Hvidsten, SportsEngine

Stillwater went on the road and earned a 3-1 win over Suburban East Conference foe Woodbury on Wednesday night.

The Ponies (9-0-0, 3-0-0) opened the scoring, as Mikias Taddess got to a long through ball a step before Woodbury goalkeeper Eddie Puglisi. Taddess shot the ball first time and it rolled past the goal line before any Woodbury defenders could clear it.

The Royals (3-1-2, 1-1-1) answered back 10 minutes later with a first-time finish of their own. Elijah Fearing had to slide to reach a pass to the edge of the Stillwater goal, but he was able to connect with the pass and slot it into the net.

Liam Moreira, who had a penalty saved earlier in the half by Puglisi, scored with under four minutes to go before the break to give the Ponies the lead back. Ila Lalich played a dangerous ball into the box on a corner, and Moreira was eventually able to head it home.

Taddess added a second goal just under three minutes into the second half. Colin Vilme played a nice through ball to Taddess, but Puglisi was able to deny his initial shot, which was his sixth save of the game. Taddess reacted first to the rebound though and doubled the Stillwater lead. 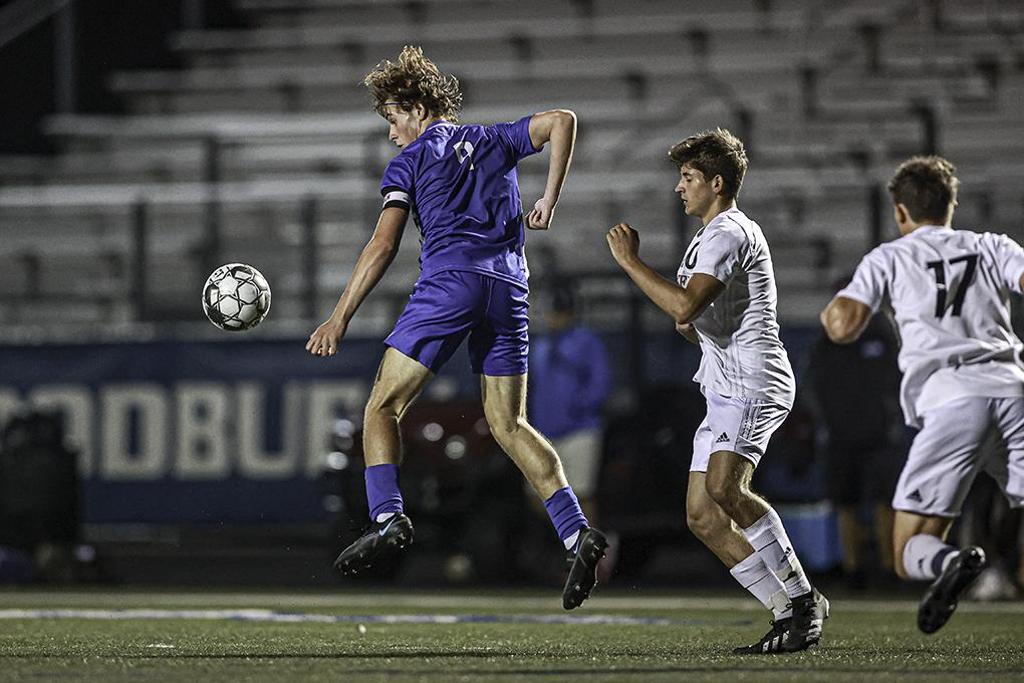 Woodbury's Xander Anderson (9) came down with a ball in front of Stillwater's Sam Chase late in the game. Photo by Mark Hvidsten, SportsEngine