While Ryan took care of the offense, the stingy Skipper defense held down the Hornets in a tight contest. 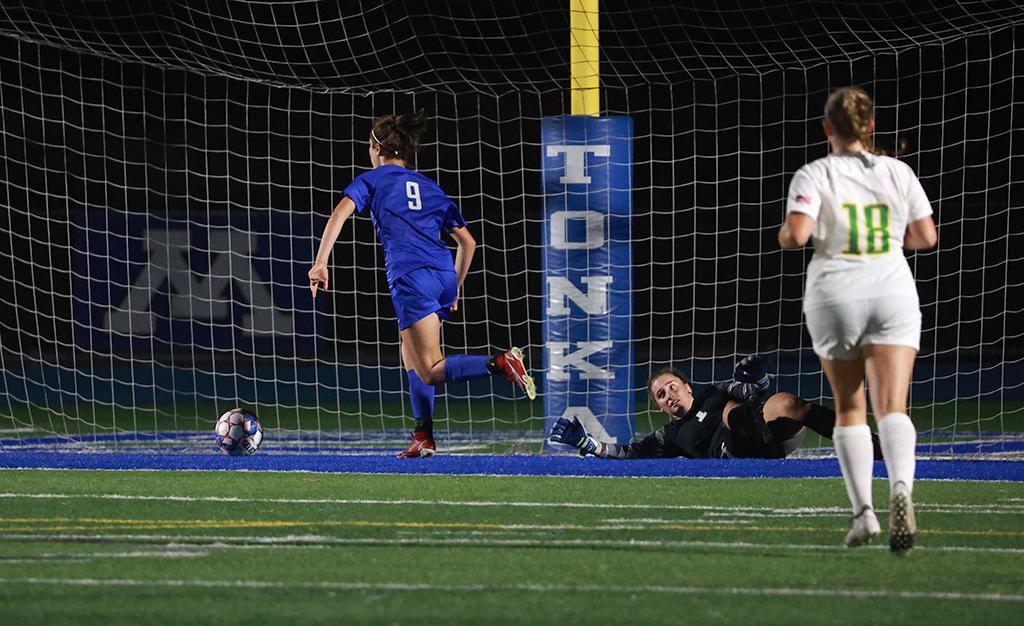 Gabrielle Ryan (9) finds an open net behind the reach of goalkeeper Bayliss Flynn and scores her third goal of the match. Minnetonka, No. 8-3A, defeated Lake Conference rival Edina, No. 5-3A, by a score of 3-1. Photo by Cheryl A. Myers, SportsEngine

Heading into a Lake Conference game last week, Minnetonka’s Gabrielle Ryan told her coaches and teammates she was going for a three-goal night. Turns out, she was off by a week.

Tuesday night against Edina, Ryan achieved her feat, tallying all three Minnetonka goals as the Skippers defeated the Hornets 3-1.

Five days earlier against Eden Prairie, Ryan finished with two goals and one assist. It was a standout performance, but one that didn’t prevent her from trying again for the hat trick. 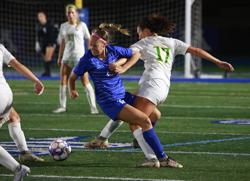 “It was awesome that she got in behind the defense,” Hans said. “She’s super competitive and always working hard.”

Her first goal of the match came late in the first half in a scrum of players from both squads.

The Skippers took the 1-0 lead into halftime and even had a chance to double it with Ryan leading the charge. Ryan received a pass from teammate Cameron Carlson leaving her alone with Edina keeper Bayliss Flynn. With some quick footwork, Ryan had an open net and buried her second goal of the evening in the 53rd minute.

While Ryan was finding her way to the net, Minnetonka’s defense was stifling on Edina’s speedy offense and the Hornets’ leading scorer Izzy Engle. The junior led the Hornets with nine goals through her first six games but was limited to one goal Tuesday night.

Knowing what Engle and the rest of the Hornets bring, Hans did what she could to prepare her team on how to handle the threat Edina poses. Hans said her team worked on one-on-one matchups yesterday to help curb the Hornets’ dangerous offense.

The Skippers executed that game plan, keeping the Hornets’ offense at bay in the opening half and for most of the second half until Engel scored to make it a 2-1 game with 11 minutes remaining in regulation.

“With our team, it is always press first,” Ryan said. “We don’t try and give a lot of space. We’re always aggressive and have a lot of grit in our defense. We have some really aggressive players that do what they can to stop and tip off any balls.”

While most would’ve expected the Hornets to be pressing in the last few minutes, Minnetonka had other ideas. Ryan got a second breakaway and beat the goalkeeper for an easy tap-in to complete her hat trick.

“I was telling myself not to miss the tap-in,” Ryan said. “The goalie always ends up coming out and I just try to push it to a side and try and tap it in.”

Ryan had a fourth breakaway opportunity but could not shake off the Edina defender. However, she spent the postgame huddle hugging and celebrating with her teammates, as the Skippers got their first win over Edina since a 2-0 victory in the 2020 Class 2A, Section 2 championship game. It was the first win against the Hornets for Hans, who took over the program prior to the 2021 season.

“To see us come together with a lot of new faces is really positive,” Hans said. “We had really good leadership in our group step up tonight.”

With a tough defense and the scoring prowess of a player such as Ryan, the Skippers have emerged as a threat in the Lake Conference despite having a core of younger players. Minnetonka will have a chance to prove itself more later this month when the Skippers get a second shot at No. 3-3A Wayzata (6-0-1).

“We’ve learned a lot about each other and it has transferred onto the field,” Ryan said. “I think that will benefit us this year and beyond. Hopefully it will lead to us getting Wayzata the next time around.” 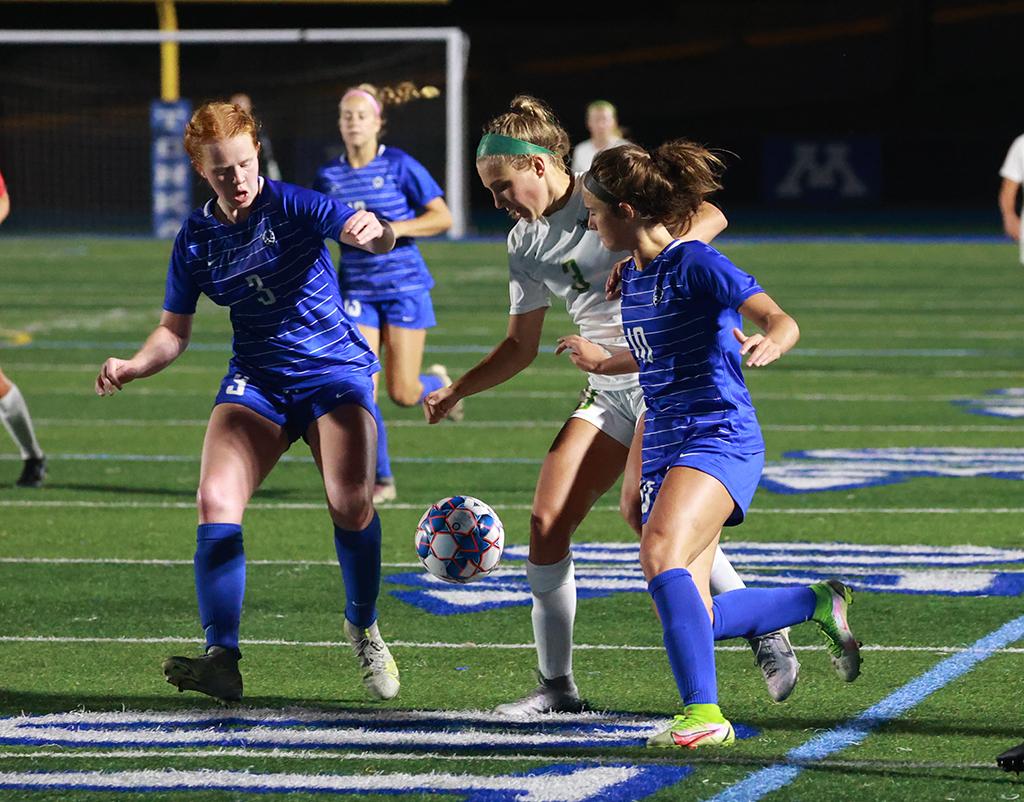 Minnetonka's Darby Allen (3) and Lauren Rusing (10) take the ball from Edina's Izzy Engle (3). The Skippers defense held the Hornets to a single goal on Tuesday night. Photo by Cheryl A. Myers, SportsEngine

Gabrielle Ryan scored three times and Minnetonka turned in a strong defensive effort as the Skippers held off rival Edina for a 3-1 home victory on Tuesday.

Most of the first-half action between the Lake Conference foes took place around midfield as each side struggled to gain possession. Then, things began to shift toward the Skippers.

The momentum led to Ryan’s first goal, which came in the 33rd minute, as she broke free from a crowd of players to score and give the lead to Minnetonka, ranked No. 8 in the latest Class 3A coaches’ poll.

Ryan emerged once again in the second half after being set up by her teammates with just the Edina goalkeeper between her and the net. After some nifty footwork, Ryan found her way to an open net and made it 2-0 Minnetonka.

Edina came into the match averaging more than three goals per game but did not find the net until late in the second half when Izzy Engle scored her 10th goal of the season. Minnetonka goalkeeper Madeleine Schultz finished with a pair of saves in the win.

The Skippers (5-1-1, 3-0-1) regained their two-goal advantage when Ryan outraced a Hornet defender and once again ended up with an open net to give the junior a three-goal night. Goalkeeper Bayliss Flynn finished the match with three saves for the No. 5-3A Hornets (4-3, 2-2). 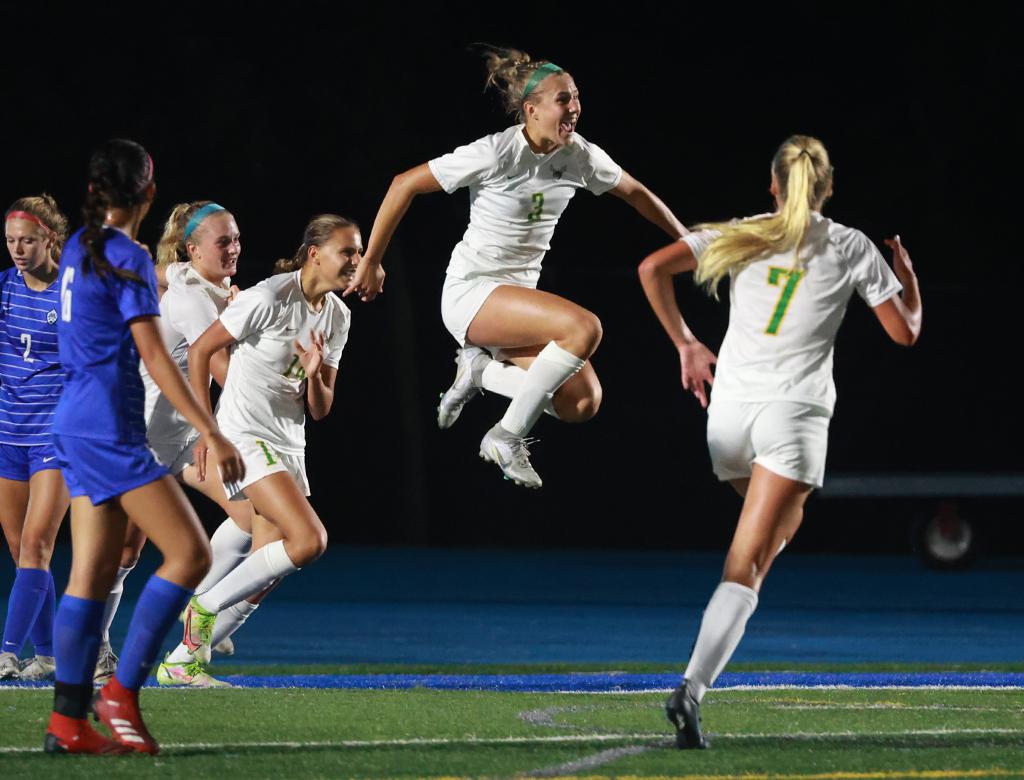 Edina's Izzy Engle (3) celebrates her goal, closing the gap to one goal in the 69th minute of the match. Photo by Cheryl A. Myers, SportsEngine