Edina’s Maddie Dahlien won the Ms. Soccer award in Class 3A, Cat Duffy-Shaw of the Academy of Holy Angels won the award in Class 2A, and Olivida Gardner captured the top spot in Class 1A, suiting up for Winona Cotter. 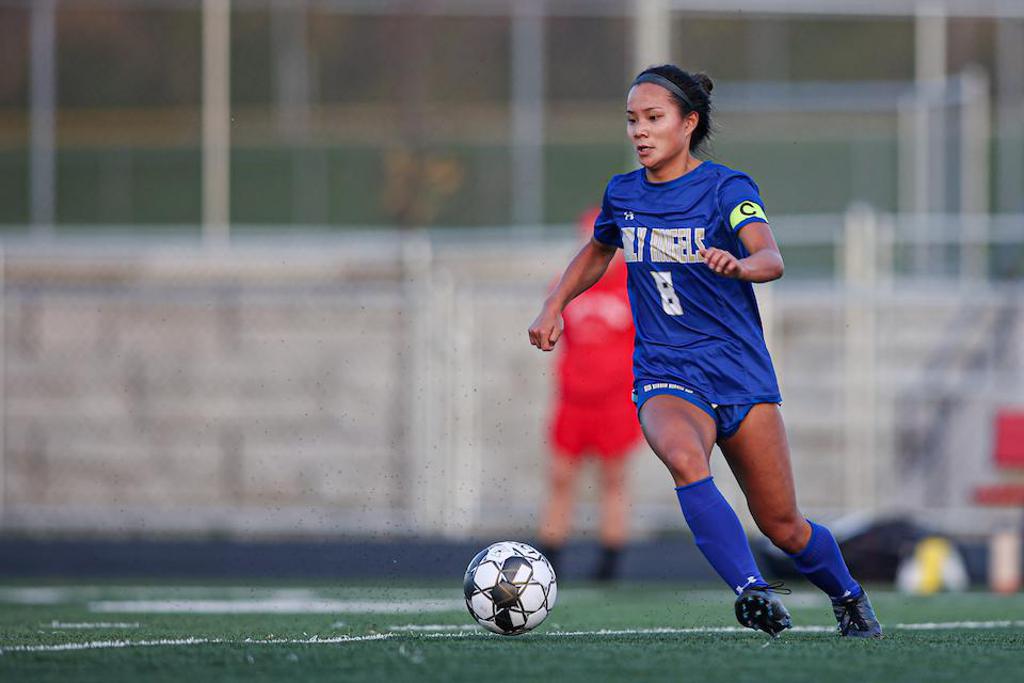 Cat Duffy-Shaw dribbles in a game against Visitation. Photo by Mark Hvidsten, SportsEngine.

Soccer moved to three classes for the first time this year, yielding three winners for each class. Five finalists were announced from each class.

Scoring the fourth-most goals of any player this season, Class 3A winner Maddie Dahlien helped propel the Edina Hornets to an impressive 20-1 record this season. Dahlein netted a team-high 37 goals and added 14 assists on the year, and scored three goals in a game on seven different occasions. One of those performances came in the Section 2AAA championship game against Minnetonka on Oct. 19, part of a 5-0 win for the Hornets. The forward led her team in scoring in three of her four years she suited up, and she helped Edina secure a section championship this season. Despite scoring two goals in the Class 3A state semifinal game, Dahlein and the Hornets came up short to Stillwater, losing 3-2. A 4-0 win over Rosemont secured her squad third place.

The Academy of Holy Angels took home the Mr. and Ms. Soccer sweep with Cat Duffy-Shaw securing Class 2A Ms. Soccer for the Stars. The midfielder was a threat everywhere on the field, and she led her team in assists with 31, which was second most of all players in the association this season. Duffy-Shaw knew how to set up her teammates, helping Audrey Garton to 27 goals on the year. A 4-0 win over St. Paul Highland Park in the team’s season opener helped project the kind of year Duffy-Shaw would have, recording four assists in the game. Holy Angels clinched the Section 3AA championship following narrow 1-0 wins over Two Rivers and Visitation. In the Class 2A state quarterfinals, Duffy-Shaw scored her team’s only two goals to help Holy Angels advance. A 2-1 loss to Mahotmedi put the Stars in the third place game, where Duffy-Shaw shined once more, scoring a goal and adding two assists, capping her phenomenal season with a 6-1 win over Cloquet-Carlton.

Maybe no player started a season hotter than Winona Cotter’s Olivia Gardner. The Ms. Soccer recipient from Class 1A was unstoppable through the first four games of the season for the Ramblers. Gardner scored 11 goals combined in those first four games, including three goals in each of the first three games. The four-game stretch saw Winona Cotter outscore its opponents 40-2. Gardner’s incredible numbers continued throughout the course of the season. The forward scored five goals in two consecutive games back on Sept. 25 and Sept. 28, and rounded out the year with 44 goals, second most among all players in the association. Following a 14-0 pandemic-altering season last year, Winona Cotter finished this season 17-2-3, and claimed the Section 1A championship, a tournament where Gardner scored seven goals. The Ramblers finished in fourth place at the Class 1A State Tournament.