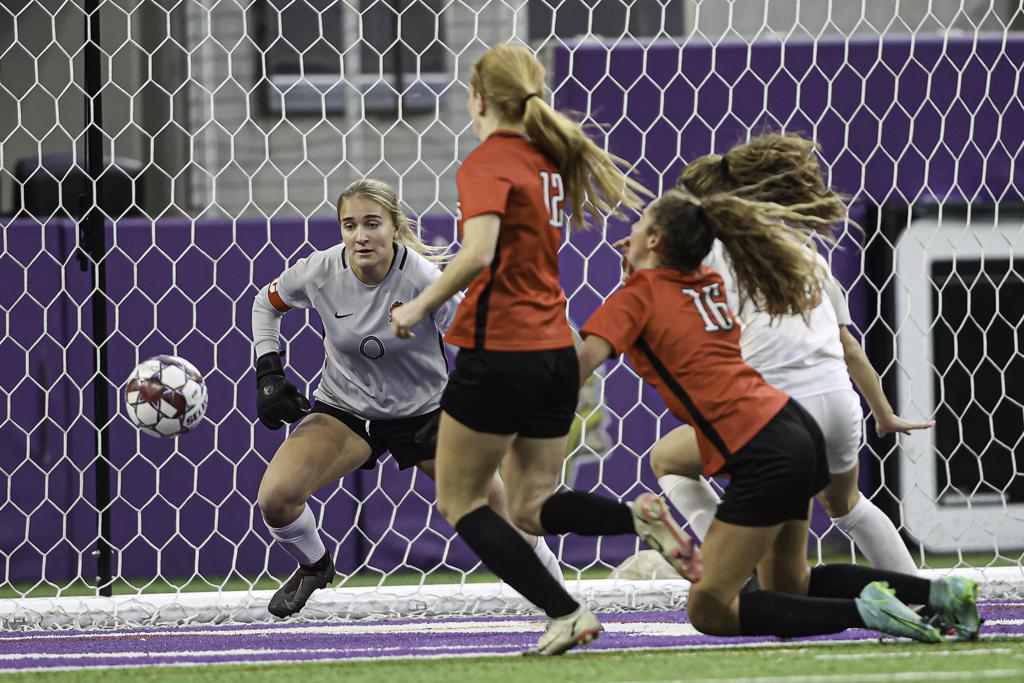 Stillwater goaltender Hadley Johnson protects the goal in the late stages of the Ponies' 1-0 victory over Centennial in the Class 3A girls' soccer state championship game. [Photo by Mark Hvidsten, SportsEngine]

The Stillwater girls’ soccer team was able to fulfill a bit of unfinished business by winning the Class 3A state championship on Saturday at U.S. Bank Stadium.

For the Ponies, the win culminated what the team began back in August of 2020. Stillwater finished last year undefeated at 13-0-1, beating East Ridge 2-0 in the Section 4 final, which would normally earn a trip to state, but the state tournament was canceled because of the pandemic.

“We came back this year with a vengeance,” Stillwater senior keeper Hadley Johnson said. “I think a lot of us were mad about last year because we thought we had a shot at the state title. We put everything we had into it this year because we knew we could do it again with the players we have.”

Coming into the final, Centennial had 13 shutouts this season and had yet to allow a goal in the state tournament. However, Stillwater broke through Centennial’s staunch defense early, as Smith corralled a touch pass from senior midfielder CJ Fredkove, evaded a defender and lofted a shot from the 6-yard line that carried over the outstretched arms of Cougars’ keeper Jordan Metz and into the back of the net in the 12th minute of play.

“That basically took the pressure off of us a little bit,” Huber said. “Centennial is good. They held the majority of possession, they had chances and opportunities. I’ve always said it’s easier to be up than to have to battle back from being down. That first goal is huge.”

It was the second goal of the state tournament for Smith, a first-year varsity player. She also netted the first goal in Stillwater’s 3-2 upset of No. 1 Edina in the semifinals.

“Nell has really stepped up for us this year,” Huber said. “She’s played a bit of everywhere and she’s scored some big goals. She’s come up big in big moments.”

Centennial first-year head coach Christa Carlson said she felt her team “dominated for the most part,” but just couldn’t crack the Stillwater defense.

“Once they’re up 1-0, of course they’re going to sit back a little,” Carlson said. ”They kind of parked the bus a bit. “When a team parks the bus like that it’s a really hard thing to break down.”

Johnson made nine saves for Stillwater to earn the shutout, including a critical diving save off a Centennial free kick with 4:30 remaining in the game.

“She played a phenomenal game today,” Huber said. “... She saved her best game for last.”

Stillwater scored a goal in the first half and rode it to the Class 3A girls' soccer championship, 1-0 over Centennial.

Stillwater's Nell Smith corralled a pass from Catherine Fredkove down the right sideline, evaded a defender and lofted a shot from the six-yard-line that carried over the Centennial goalkeeper and into the net in the 12th minute of play.