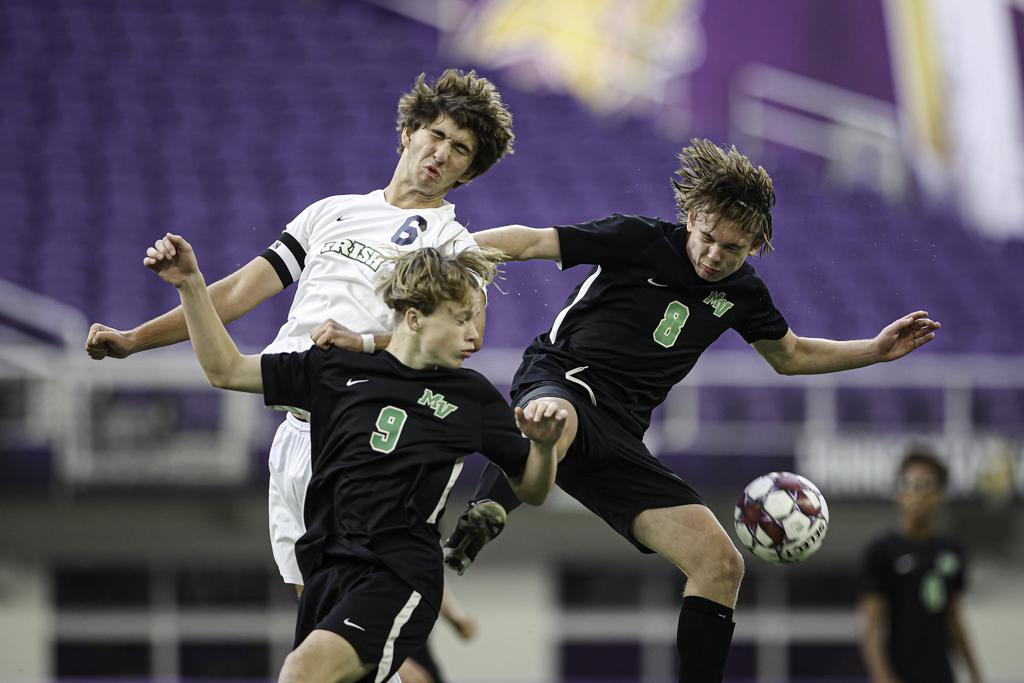 Two goals down? It hadn’t happened to Mounds View all season, but coach Joe Warren had faith. It may have been a first for the Mustangs’ boys’ soccer team, but he knew his players could handle it.

Mounds View picked itself up from the two early punches Rosemount delivered and scored three straight goals to win the Class 3A boys’ soccer championship 3-2 on Saturday at U.S. Bank Stadium.

“I was telling the boys at halftime that this is one for the ages if we can pull it off and come back,” Warren said. “These guys are extremely resilient and persistent. I’m extremely proud of them.”

Rosemount, which had a 4-6-3 regular-season record, made a strong pitch to continue its surprising postseason run. Reid Wolf scored on a header in the seventh minute for a 1-0 lead. They doubled that lead when Andres Delgado’s free kick bounced off the head of a player from each team in front of the Mounds View goal and into the net.

It was officially scored an own goal on Mounds View, but Rosemount’s Nicholas Wenthe also went up with a Mustangs player and appeared to get a piece of the ball.

Mounds View’s rally began late in the first half. Hoyt picked up the ball at the edge of the penalty area and scored in the 38th minute.

“I said to Sam ‘We’ve got to get one,’ with about six minutes left,” Warren said. “I knew that if we could, it’s a momentum changer psychologically us. Fortunately for us, it happened.”

Hoyt converted the equalizer in the 55th minute when he controlled a pass from Simon Greer and drove it in.

“It felt amazing,” said Hoyt, a senior who didn’t play on the varsity in 2020 after transferring in from Shattuck-St. Mary’s in Faribault. “Running over to the fans, it was a really good experience.”

The game-winning goal came off a little improvisation by Mounds View. Swallen wasn’t originally planning to take the free kick, but Elias saw something he liked.

“I wasn’t originally going to take it, but Henry was telling me I should take it,” Swallen said. “So I just whipped it in and the rest is history.”

“Joseph’s been serving balls in all year,” Warren said. “I knew that if he whipped it in right, something good was going to happen.”

Rosemount coach Todd Farrington was more than pleased that his team was able to get as far as it did. “We had more wins in the postseason than we did in the regular season,” he chuckled. “It was a tough game. Hats off to Mounds View. Joe Warren is a great friend and tremendous coach. If it wasn’t us, I’m glad it was Mounds View.”

Sam Hoyt, Mounds View's Mr. Soccer finalist, scored two goals and Henry Elias tallied the game winner in the 75th minute as the Mustangs rallied from a two-goal first half deficit to beat Rosemount 3-2 for the Class 3A title.

Neither team was ranked prior to the state tournament but No. 4-seeded Mounds View (16-5) was able to chip away at its opponents early lead for its first boys soccer championship since 1977.

Rosemount, which had a 4-6-3 regular-season record, had its five-game post-season winning streak ended.