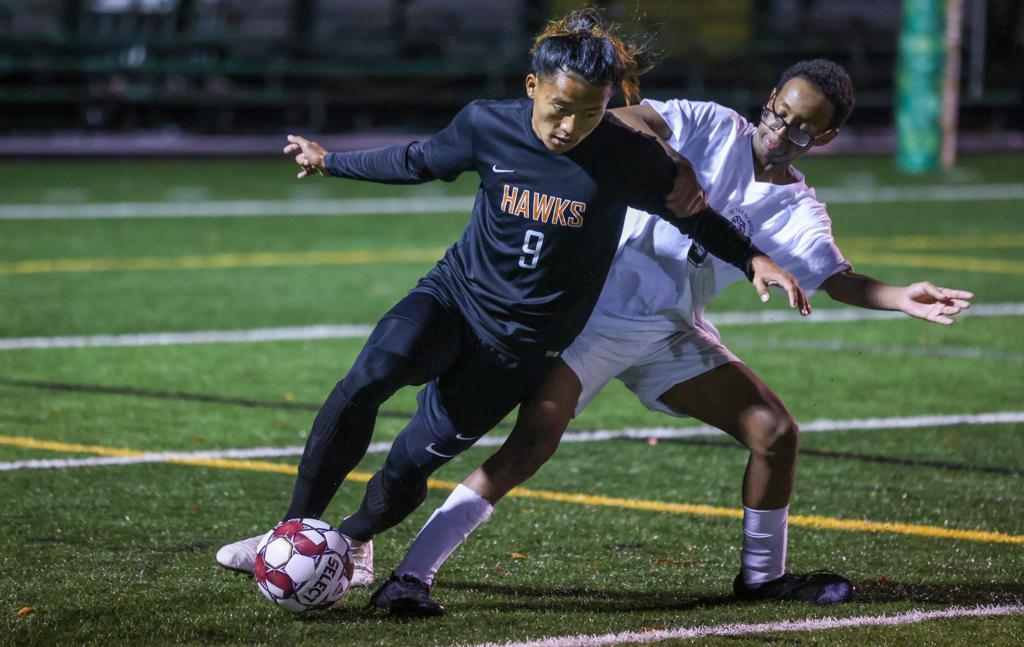 St. Paul Humboldt's Yah Naing Oo (9) tries to get around a Metro Schools College Prep defender late in the second half of Thursday night’s match. Oo scored two goals in the Hawks’ 4-1 victory over the Lions in Edina. [Photo by Jeff Lawler, SportsEngine]

St. Paul Humboldt navigated cold, wet conditions and physical play to defeat Metro College Prep 4-1 on Thursday night in Edina to advance to the next round of the Class 1A state tournament. 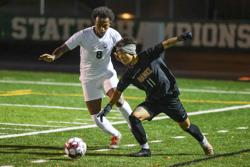 Despite play that got a bit scrappy — with three yellow cards issued in the second half — Tha said he was proud of how his team stayed calm and pushed through the physicality.

“No matter what they did, we just stayed quiet, kept on playing our game, and focusing on our game,” Tha said. “I’m really proud of my team tonight. They really put effort in as a group and we communicated and played really strong.”

Hawks’ head coach John Pucci credits his team’s growth over the last year not only as soccer players but as people. After leaning hard on his seniors last year, Pucci and the Hawks took their successes of last year as a learning opportunity.

“We played great soccer last year but the kids were just young,” Pucci said. “Seeing the players not only gel but to be positive leaders and excite the community of St. Paul Humboldt, that has been the biggest highlight to me off the field.”

That growth of maturity could be seen after the Lions nearly tied the game midway through the second half after trailing for most of the game. A shot that made its way past Hawks goalkeeper Eh Htee Shu was called back due to offsides to keep the score at 2-1. The Hawks remained composed and in the last 23 minutes, Oo and Tha each scored their second goals of the evening to propel the Hawks’ win.

As disappointing as a loss is to end the season, Lions’ coach Hanad Fodey commended his team for reaching the Lions’ furthest point in the postseason.

“We started a few years ago with some of these guys even in middle school," Fodey said. "We started to build the program from there, and now four to five years later, we’re playing at a really high level.”

In other state quarterfinal games:

Holy Angels 1, St. Cloud Tech 1, OT (Holy Angels wins shootout 4-1): The Stars (14-3-2) advanced to their third consecutive semifinal by knocking off the Tigers 4-1 in a shootout. The two squads played to a 1-all tie in regulation and overtime. St. Cloud Tech (12-5-2) got on the board first in the opening half while Holy Angels scored the equalizer in the second half.

Willmar 1, Worthington 1, OT (Willmar wins shootout 4-3): The Cardinals (18-0-2) got their first state tournament victory in school history by beating the Trojans 4-3 in a shootout. The two teams played to a 1-all draw in regulation and overtime. Willmar tied it at 1 when Abdullahi Mohamud scored off a free kick by Anthony Reyes Jimenez with five seconds remaining. Senior Ulises Barrera of Worthington (19-1-0) broke a scoreless deadlock with a goal in the 73rd minute.

Pine Island/Zumbrota-Mazeppa 1, St. Cloud Cathedral 0: Christopher Tree scored the lone goal in the 30th minute as the Wildcats (17-0-2) blanked the Crusaders (15-3-0) at Monticello. Tree scored on a 40-yard blast.

The Hawks held a one-goal lead at halftime on Tha’s first goal mid-way through the half. Oo recorded his first goal early in the second half before the Lions’ Mohamed Abdullahi cut the deficit in half shortly after. The Lions nearly tied the game as a shot beat Hawks’ goalkeeper Eh Htee Shu, but the goal was called back for offsides.

Oo and Tha each scored their second goals in the second half to seal the Hawks’ win.