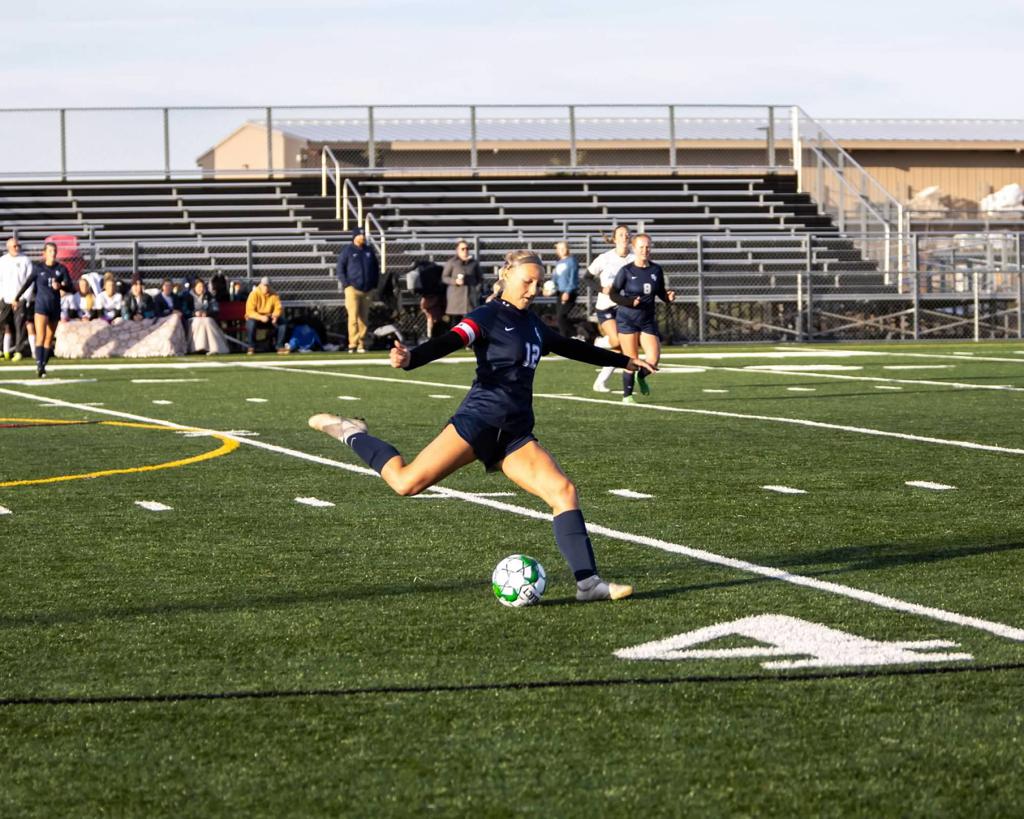 St. Francis girls’ soccer player Mattisyn Mensink went on the attack against Zimmerman in the Class 2A, Section 6 final on Thursday. (Photo courtesy of Tony Hoglund)

Nine of her 17 varsity players are true defenders, leaving the Saints a bit thin in the attack. While Johnson’s coaching brethren typically concern themselves with getting their teams to jell defensively, she was forced into personnel moves to generate more goals.

The undefeated Saints (18-0) responded in style, qualifying for their first state tournament in program history. No. 4 seed St. Francis plays at 7:30 p.m. Wednesday against No. 5 Cloquet-Carlton (16-2) in a Class 2A quarterfinal match at Irondale High School.

St. Francis secured its place with an 8-1 thrashing of Zimmerman in the section final, an offensive explosion Johnson saw only in her dreams earlier this season. The Saints won six of their first seven games by scores of 1-0 or 2-0.

“We would dominate but we couldn’t score,” said Johnson, recently named Class 2A, Section 6 Coach of the Year.

St. Francis learned to score. Opponents weren’t as fortunate. The Saints allowed a paltry five goals all season and never more than one in a game. Led by center defender Lauren Buzzell, a Ms. Soccer Award finalist, players never lost their defensive pride.

After no state tournament last year because of COVID-19 restrictions, soccer returns bigger than ever. The field expanded from two classes to three, allowing for another 16 qualifying teams and two additional champions. Quarterfinals take place at neutral turf sites, with semifinals and finals at U.S. Bank Stadium. Third-place games move to the West St. Paul Regional Athletics Center dome.

Humboldt qualified for its first state tournament since 2011 in part because of the emergence of a surprise goaltender. Junior Mu Tu Hsa Lah got his first start of the season Oct. 8 against St. Paul Como Park on the first night of high school games played at Allianz Field. Both schools’ girls programs played the opening game of the doubleheader at the home of Minnesota United.

Regular-season games do not go to a penalty kick shootout, but the Hawks and Cougars needed a winner in the Mayor’s Cup rivalry game. Mu Tu Hsa Lah, who played a little in goal in his youth career, started because senior Eh Htee Shu was experiencing vision problems. Humboldt won the match, an emotional lift going into the Section 3 playoffs.

The Hawks defeated Minnehaha Academy in the first round with Eh Htee Sh in goal. Mu Tu Hsa Lah started the semifinals and helped shut out Trinity. In the championship game, he denied two great St. Paul Academy scoring chances early in the game, which ended as a 1-0 Hawks victory.

“He’s a librarian teaching assistant,” coach John Pucci said. “The day after we beat SPA, the librarian’s wife called to talk all about the goalie who made 20 saves in the section final. When she said his name, the librarian couldn’t believe it was Mu Tu. He’s a great kid but he’s so quiet.”

Four of the six Mr. and Ms. Soccer Award recipients lead their teams into the state tournament. For the girls, watch for Maddie Dahlien (Edina), Cat Duffy-Shaw (Holy Angels) and Olivia Gardner (Winona Cotter). On the boys’ side, Carter Hermanson (Holy Angels) remains in the mix, while Sidike Jabateh (Park Center) and Ralph Smits (Breck) were eliminated.