Rochester Mayo advances to the state tournament for the eighth time in school history. 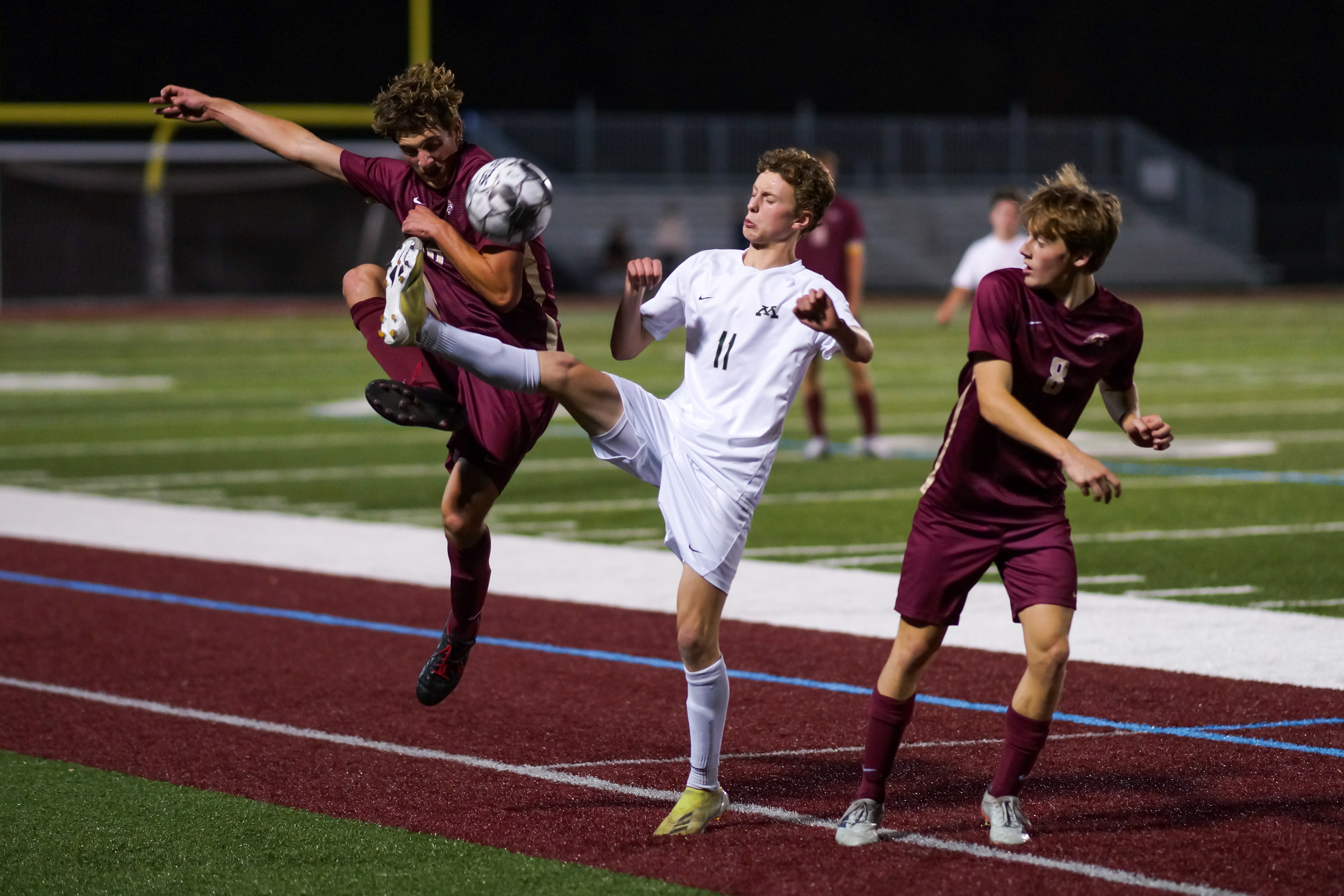 Family members were keeping posted on social media from as far as southern Africa. Even more family and friends, including past players, made the 60-mile drive to see it in person.

Rochester Mayo knocked on the doorstep multiple times in recent years in the section playoffs, but it hadn’t broken through in six years. That is, until No. 3 seed Rochester Mayo fended off No. 1 Lakeville South 2-0 Tuesday in the Class 3A, Section 1 final.

“We haven’t been to state since 2015. It’s an honor,” said Rochester Mayo senior midfielder Yonis Muse. “We have a lot of brothers who played soccer and we have a lot of family supporting us. Everyone on the team gave everything they got. It’s just the greatest vibe ever.”

The host Cougars finished the regular season ranked No. 2 in the Class 3A coaches’ poll and suffered their first loss of 2021in the upset. Lakeville South (14-1-1) hadn’t trailed in a game since falling behind 1-0 Sept. 16 in an eventual 2-1 win vs. Eastview. 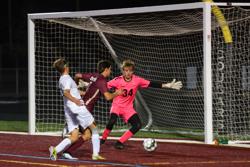 The Spartans, now winners of nine straight, took the Cougars out of their comfort zone by striking in the 15th minute. Junior midfielder Xavier Laack scored from the right side from inside 10 yards to stun an opponent with five shutouts, including in two of the last three games.

Lakeville South finished with a 10-4 shots on goal advantage and came tantalizingly close throughout the night.

The Cougars’ leading scorer, senior midfielder Loic Mesanvi, went out of the game with an injury in the 29th minute. The co-captain’s firepower that yielded 24 of the team’s 44 goals during the season was sidelined until he returned for the entire second half with a hobble.

A co-captain, Muse, exited that game with an injury within the first 10 minutes. He made his presence felt in the rematch, taking a deftly placed pass on a numbers advantage from senior co-captain and forward Tim Persons. Muse deposited the ball in the bottom of the net from close range for an insurance goal in the 45th minute.

“We knew that we weren’t going to have a tremendous number of opportunities, so we needed to be efficient when we got them,” said Rochester Mayo head coach Tim Jennings. “I think the opportunities we did have, we had a few players make runs on the outside, especially the second goal. Tim broke to the outside and fed Yonis right on the penalty spot. He had the timing and composure to put it away. That was really what we were looking for, having that opportunity, then we could sit back and defend a little bit, clear when we need to and just keep possession. That’s what we were looking for in the second half.”

Laack’s first goal produced pressure on Lakeville South, and Muse’s began to create a vice grip. Lakeville South hadn’t faced a multi-goal deficit since a 2-0 disadvantage in the season opener vs. Benilde-St. Margaret’s. The Cougars came back to win 3-2 over a top-10 team in Class 2A.

“They all got frustrated. That was our plan, let them get frustrated,” Muse said. “We do what we can do, control what we can control like coach always tells us.”

Jennings pointed out the back line that stood strong in front of Hobday and funneled balls to senior midfielder Alex Shah to create transition opportunities or clear out trouble.

“I’m going to give praise to our junior in the back line, Noah Bestrom. I thought he played tremendously well,” Jennings said. “Our entire back line of Alec McBane, Bestrom, Adam McLellan-Cassivi and Nick Crockett did so tremendously well just denying any opportunities, applying pressure when they really needed to, being loose when they needed to as well, linking up with Alex Shah in the center midfield.”

A co-captain, Persons couldn’t help but think of brother, Ben, when soaking up the postgame celebration.

“My brother played two years ago and was a captain as well,” Persons said. “It means a whole lot to get to state. There have just been so many times Mayo got so close and had such quality teams. We come out here and play an unbelievable Lakeville South team and we were able to play unbelievably as a team. It feels really good.”

The Spartans began the season 2-2-0 before gaining steam to go to state on a nine-game win streak. They toppled crosstown rival, No. 2 seed and Class 3A No. 10 Rochester Century, 2-1, in the semifinals last week.

“Early in the season, the chemistry was lacking, but once things clicked, it felt electric,” Persons said. “When we play like a team, this thing happens. An underdog can get an upset over an unbelievable team.”

This is Rochester Mayo’s eighth trip to state. The first seven came under the program’s founder, Charles Aboudd, who retired in 2019 with 142 wins under his belt and a deep legacy within Rochester youth soccer.

Neil Cassidy entered as head coach in 2020 and led the Spartans to an 8-4-1 record. Cassidy took a leave of absence this summer due to family health reasons. He entrusted friend of over 20 years, Jennings, to lead the team this season on an interim basis.

Jennings has been a fixture in the Rochester youth soccer scene for years. He was most recently an assistant coach for Rochester Lourdes before coming to Mayo in July.

“So many of them had played together for so long,” Jennings said of his roster. “The program was started by Dr. Aboudd 30-some years ago. He really created that culture of everybody works together, everybody supports each other. So I came in and didn’t have to reinvent the wheel, I just had to keep the wheel from falling off.”

The wheels have far from come off for Lakeville South. The Cougars were South Suburban Conference champions and bounced back from a 2-5-5 record in 2020 after making the program’s first state tournament appearance in 2019.

“I think starting out the year, the coaching staff was excited about the group we had. We would have never guessed they’d be in the top-10 rankings and stay there five to six weeks, whatever it was,” Lakeville South head coach Aaron Fenton said. “Captains Loic, JP [Hill] and [Connor Beauchamp] did really well. For them to go through the regular season undefeated I think is unheard of for us. It definitely exceeded expectations. We came up a little short today, but still if you’re looking at the positive we had a great season and I’m really proud of them through those times.” 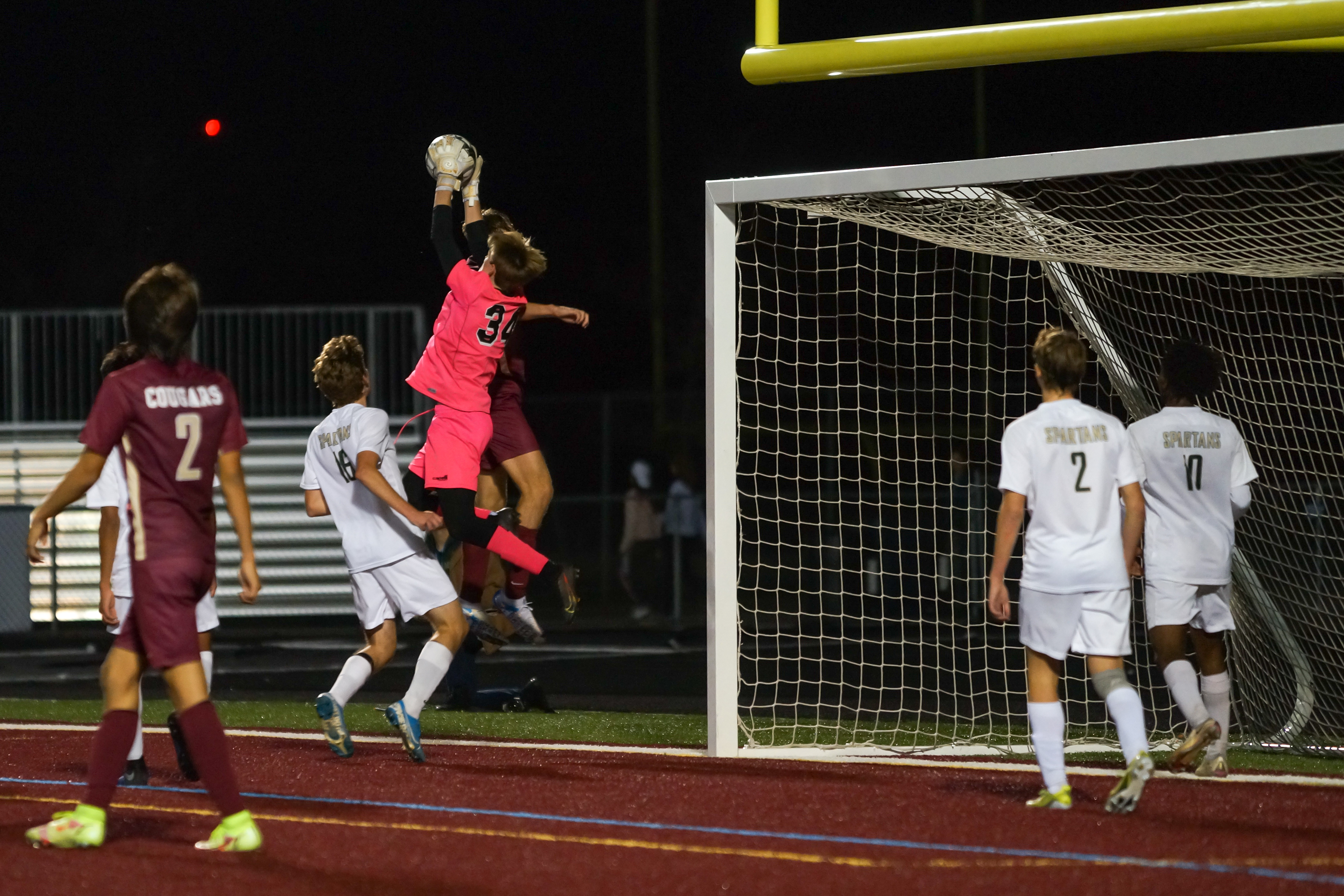 With two upsets in a row in the Class 3A, Section 1 playoffs, Rochester Mayo is on to the state tournament.

No. 3 seed Rochester Mayo won 2-0 Tuesday at No. 1 Lakeville South in the section championship.

The Spartans (14-3-0) got on the board in the 25th minute when junior midfielder Xavier Laack scored from the right side inside 10 yards, burying the ball in the back of the net.

The Spartans tacked on another goal in the 48th minute when senior midfielder Yonis Muse took a short pass from senior forward Timothy Persons and deposited from short range into the net.

The Spartans beat No. 2 seed and Class 3A state No. 10 Rochester Century 2-1 in the semifinals.

Rochester Mayo advances to the state tournament for the eighth time in school history and first time since 2015. The first-round quarterfinal games for the Class 3A tournament are Oct. 26-28 at sites to be determined. Top five teams in the bracket will be seeded with No. 4 taking on No. 5 and the top three seeds meeting a random opponent among the three unseeded teams. 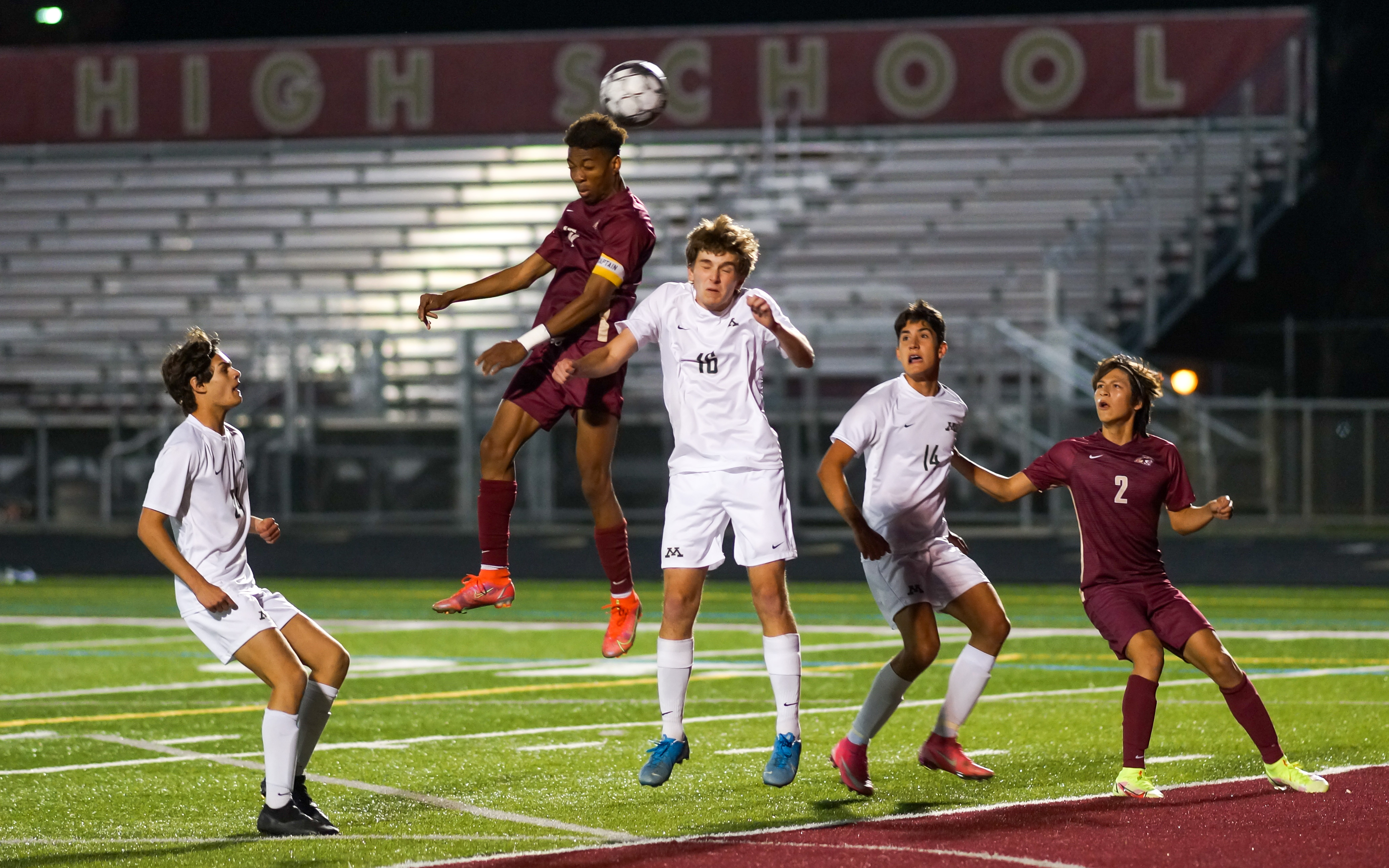