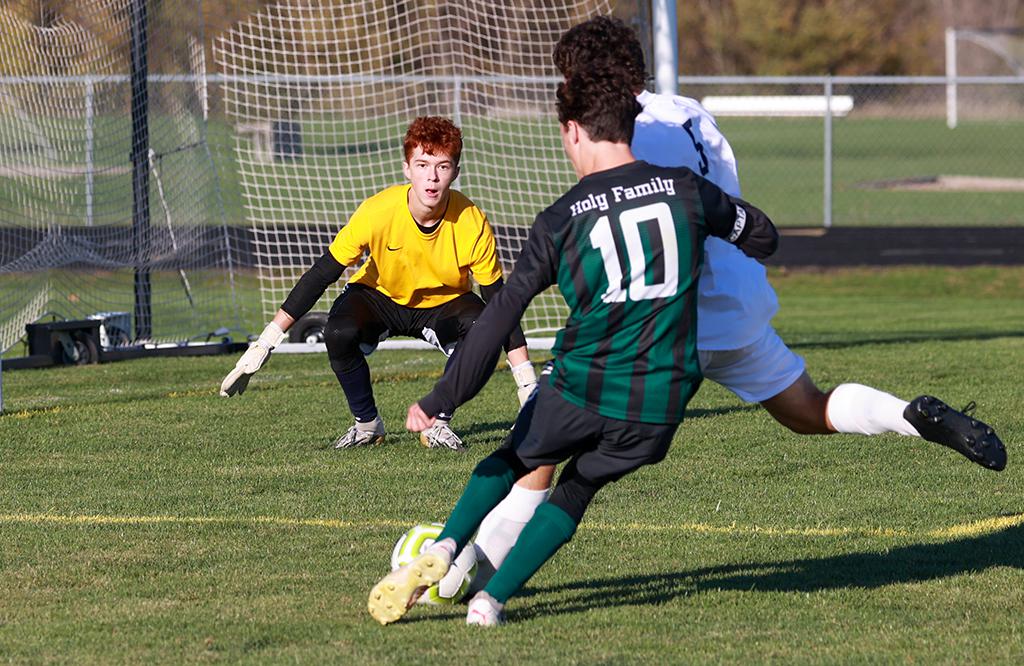 Goalkeeper Ben Martin keeps an eye on the ball as defender Andrew Vos (5) clears it from Charlie Fice (10). Providence Academy tallied their eleventh shut out this season in a 1-0 win over Holy Family. Photo by Cheryl A. Myers, SportsEngine 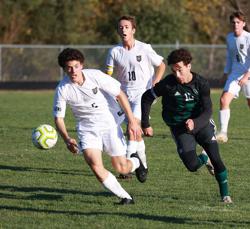 Two years ago, the last time Providence Academy made the trip west to Victoria to face Holy Family Catholic in a section playoff game, the host Fire pummeled the Lions.

“We got killed. It wasn’t even close,” third-year Providence Academy coach Lev Buslovich said of the 2019 section playoff loss. “We didn’t even come out of our half [of the field].”

On Saturday afternoon in the Class 1A Section 6 semifinal, it was a different story. Providence Academy, ranked No. 3 in Class 1A in the Oct. 11 Minnesota High School Soccer Coaches Association poll, pitched its 11th shutout of the season, and dispatched the higher-seeded host Fire with a 1-0 final that advances Providence Academy (11-2-4) to its first-ever section final.

It’s the farthest the Lions have ever gone, and further proof of what the program is building.

Doormats of the IMAC conference for years, the Lions won four games (all against lower tier teams) during Buslovich’s first season in 2019 and five last year.

Now, this scrappy group of players is breaking new ground and blazing a trail for the fledgling program that has won more games than the previous three seasons combined while allowing just nine goals in 2021.

Providence Academy is led by a group committed to unselfish execution of “total football,” and a scoring by committee where 11 different players have scored goals, but nobody has more than six.

“We’ve got an entirely different team,” Buslovich says. “Last year we learned how to play defense, now we know how to play offense. It’s a team that plays together.”

“We’re on a whole different level now,” he added. “Never in the history of Providence have we done anything like this before. We’re building a tradition for this school.”

Senior forward Matt Wooden stepped up and became the hero on offense while junior goalkeeper Ben Martin made eight saves to extinguish the powerful Fire offense that had been averaging greater than three goals per game.

Saturday was a difference of style. Holy Family worked the long passes to feed its high-powered forwards. Providence, in contrast, worked the ball methodically upfield with an emphasis on ball control and possession. Multiple passes, tiki taka, versus the home run.

While No. 5-1A Holy Family (8-6-2) held an advantage in possession and time on attack early, Providence Academy exerted itself more as the game went along until Wooden stepped up. With 16:21 remaining, Wooden emerged with the ball from a scrum following a throw-in and buried a shot from 18-yards-out that sailed to the left of the keeper and just inside the far post.

For the Lions, it was all about trusting the process.

“We just settled in and played defense at first,” Wooden said. “And we knew we would play offense when it comes to us. Once we started moving the ball we were able to find those open passing lanes.”

Saturday was Wooden’s second game back after missing a chunk of the season with a strained MCL on his dominant right leg. He was still hesitant to trust his right leg, but in that instance he couldn’t help himself. His trust in his team’s keeper, however, could never waiver. As Martin put up a wall and weathered the early storm, it only emboldened the Lions still learning how to win these types of games.

The win sets up the section championship Tuesday in Delano, where Providence Academy will face top-seed Southwest Christian Academy for a second time this season. The first time around resulted in a scoreless tie. This time, Providence Academy is fully healthy and feeling as though they are at the top of its game.

“If we can keep this momentum going, it can be a different story,” Martin says. “Without a doubt, we are playing our best (soccer) of the season right now. We just want to see how far we can push it. This is the best our program has ever been. The sky's the limit at this point.” 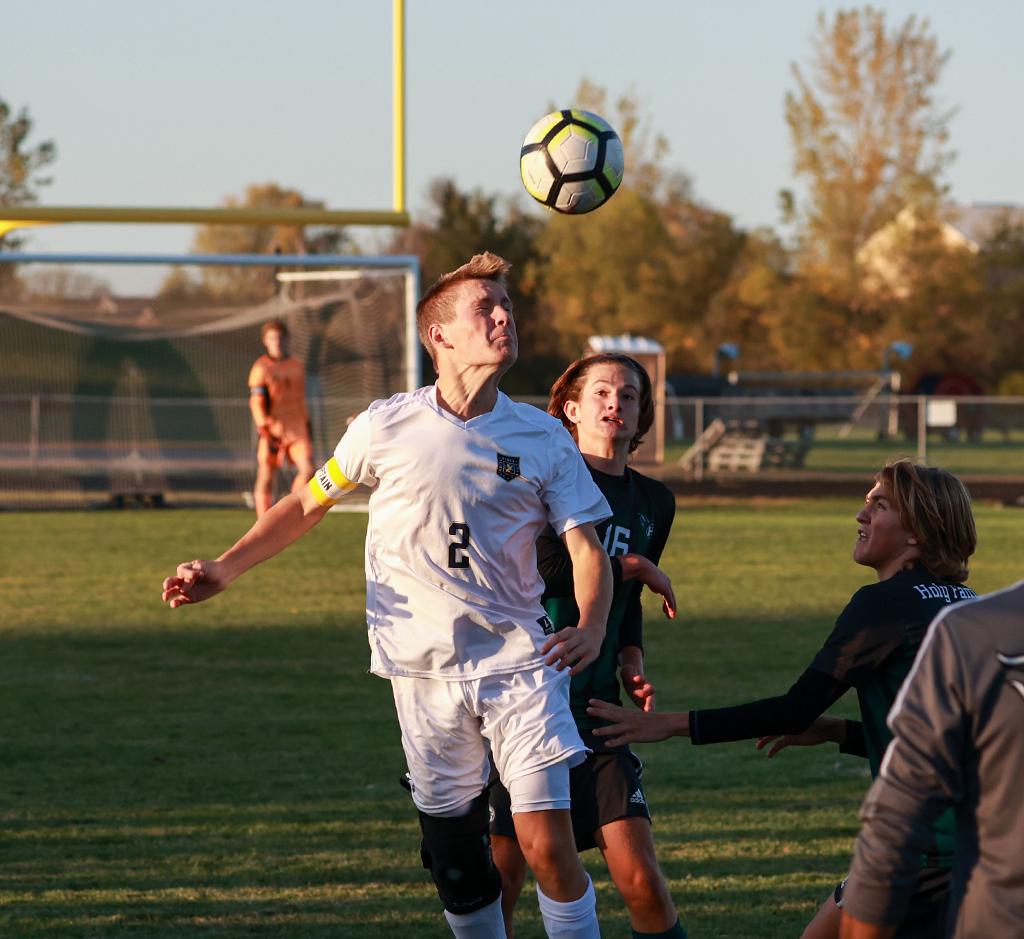 Providence Academy's Matt Wooden (2) advances the ball on a header. Wooden scored midway through the second half to give the Lions a 1-0 win and advancing them to the Class 1A, Section 6 final on Tuesday night. Photo by Cheryl A. Myers, SportsEngine

Providence Academy is headed to its first-ever section final.

Providence Academy edged Holy Family Catholic in a defensive battle Saturday afternoon, riding a 1-0 victory to punch its ticket to the Class 1A, Section 6 final.

The Lions, ranked No. 3 in Class 1A in the Oct. 11 Minnesota High School Soccer Coaches Association, broke a scoreless stalemate when forward Matt Wooden knocked home a shot from the edge of the penalty box with 16:21 remaining. It pushed the Lions to a lead they would hold.

Fifth-ranked Holy Family Catholic (8-6-2) enjoyed more time on attack and more possession early on, but with Providence Academy goalkeeper Ben Martin and a lockdown defense that grew more stingy as the game progressed, the Fire were left with nothing to show for their efforts. Providence Academy (11-2-4) extinguished the Fire with its 11th shutout of the season. 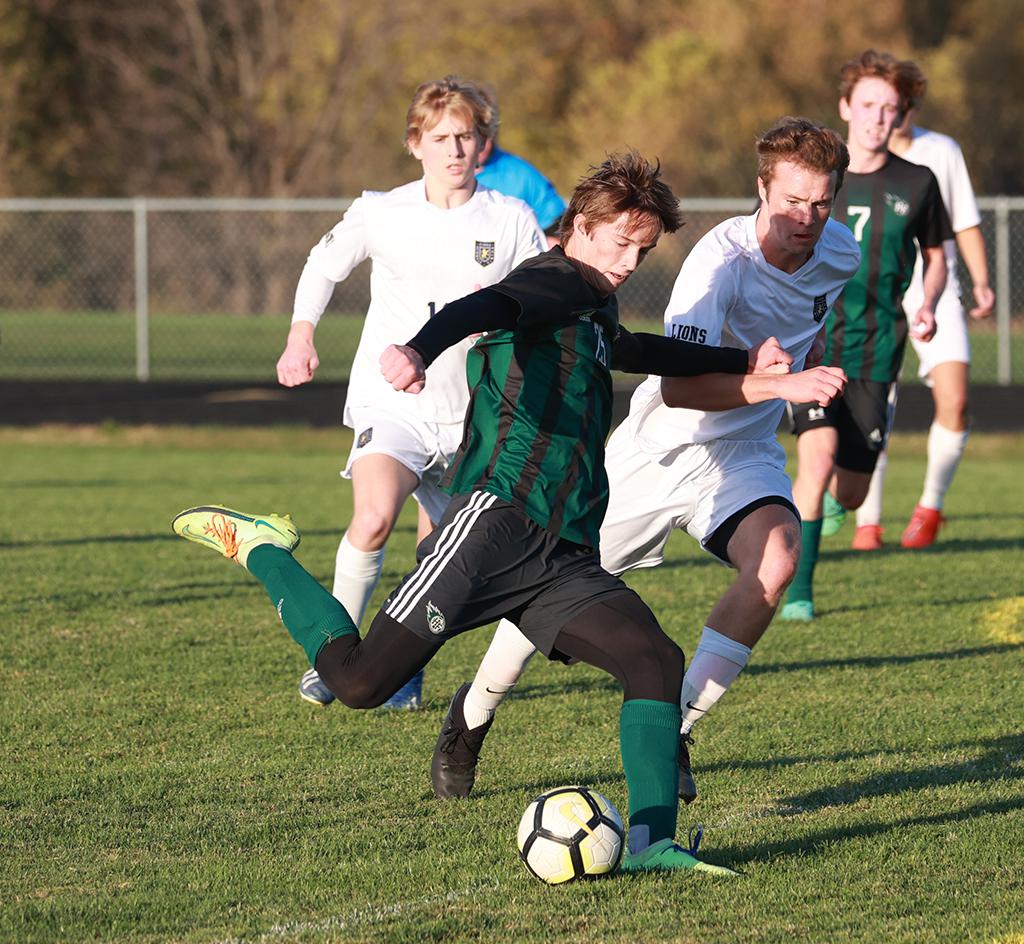 Holy Family's Thomas Laaksonen (25) sends a deep pass downfield. Laaksonen led all scoring during the season for the Fire with ten goals and one assist. Photo by Cheryl A. Myers, SportsEngine