Two first-half goals was all the Stars needed to best the Lakers and finish the regular season undefeated. 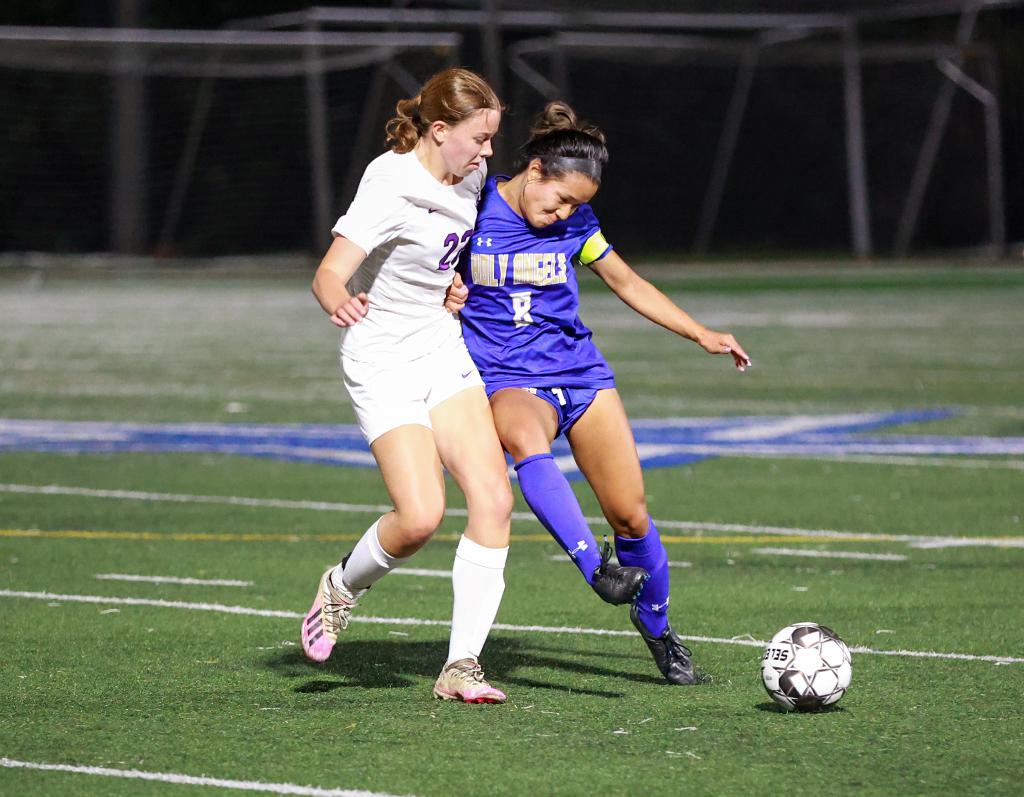 Academy of Holy Angels' Cat Duffy-Shaw (8) steals the ball from Victoria Westgate (22) in the first half. Duffy Shaw tallied her 26th assist of the season in the Stars' 2-0 win on Thursday night. Photo by Cheryl A. Myers, SportsEngine

When Thursday’s match against Minneapolis Southwest ended, there were plenty of reasons for Holy Angels coach David Marshak to boast about his team as the Stars completed their second consecutive unbeaten regular season.

But his quote after the game wasn’t so positive.

“First half was good,” Marshak said. “Second half was not.” 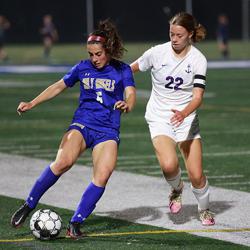 Against Minneapolis Southwest, Holy Angels cruised to a 2-0 victory. It was the 29th consecutive match for the Stars without a loss and the end of the 2021 regular season. While this win might have left Marshak less than satisfied, he appears to have a group primed for a run starting next week in the Class 2A Section 6 tournament.

Holy Angels’ game against the Lakers (5-6-3, 2-1-1) came two days after the Stars pulled out a 1-0 victory against Breck, No. 6-1A. Marshak’s 200th career win came in a game that the Mustangs employed a defensive strategy, leaving just two or three players on the attacking end of the field.

For No. 2-2A Holy Angels, things looked different on Thursday.

After the teams traded chances in the early goings, the Stars (15-0-1, 6-0) pounced on their first corner kick attempt. Senior midfielder Catherine Duffy Shaw’s corner kick landed on the head of freshman Eileen Braun, who got the ball in for Holy Angels to take a 1-0 lead. With the assist, Duffy Shaw became the school’s all-time points leader with 88 in her career. It was her 26th assist of the season.

“We like to exploit mistakes on the back line,” Duffy Shaw said. “We pick and choose our moments.”

The more open style played to some of Holy Angels’ speed. In the 32nd minute, a rush by the Stars ended with freshman forward Elizabeth Mejia scoring on a pass from junior forward Kathryn Van Sloun.

Though the second half was quiet scoring-wise, it was enough for the Stars to complete the victory and finish the regular season unbeaten for the second consecutive season.

With the postseason now here, Holy Angels enters as a team with a target on its back. It’s something the Stars have grown accustomed to.

“We tell the girls, for a lot of teams, this is their biggest game of the year against us,” Marshak said. “We can count on the other team giving us their best shot.”

Though seeing a section tournament followed by a state tournament will be more of what all high school soccer teams are used to, it will be different for many teams, including Holy Angels. With the expansion to three classes, the Stars moved up to Class 2A. Marshak said after the game that while the classification is different, the section is chalked with teams that they’ve played before.

“This section is very competitive,” Marshak said. “We are expecting a battle right from the start. I like it. It’s high stakes, but it’s competitive soccer.”

If Holy Angels makes it out of sections, the Stars will certainly be considered a favorite along with No. 1-2A Benilde-St. Margaret’s. Holy Angels will not only be looking to capture a state title for this group, but also for the group in 2020 that did not have a state tournament.

“It’s mixed feelings,” Marshak said. “I’m excited for our seniors, but I’m still sad for last year’s group. That’s something we’re thinking about. Keeping that group in our minds because they never got the shot.” 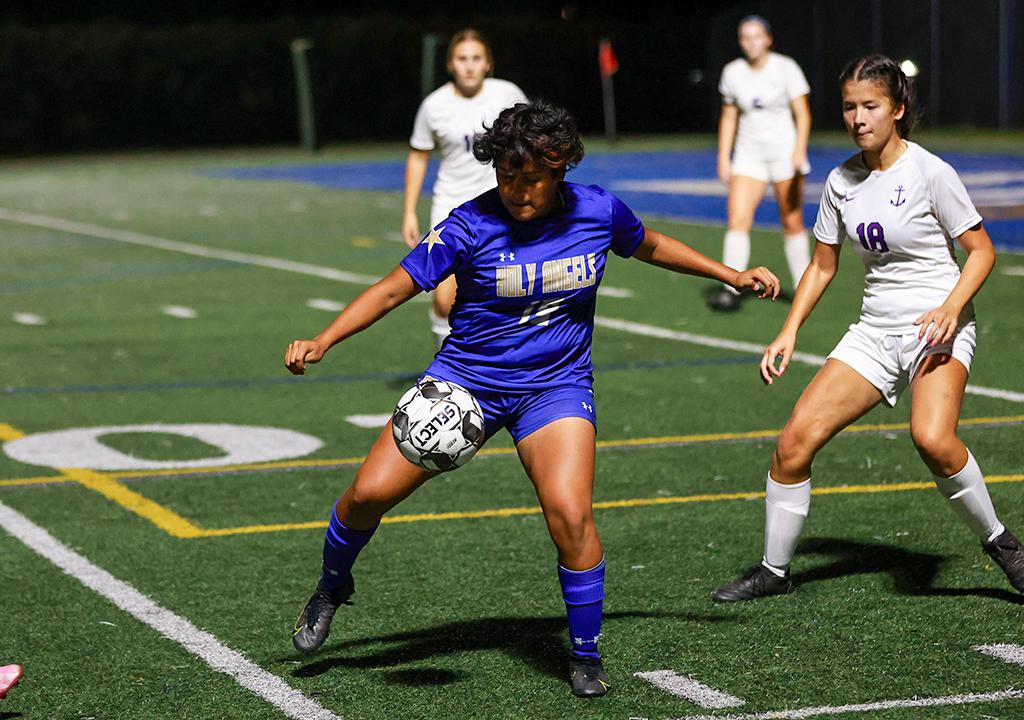 Elizabeth Mejia (19) plays an in bound pass for the Stars in front of Natalie Schach (18). Mejia scored late in the first half to give Academy of Holy Angels a 2-0 lead. Photo by Cheryl A. Myers, SportsEngine

After a hard-fought 1-0 win against Breck on Tuesday, Holy Angels came back on Thursday and completed an unbeaten regular season as the Stars defeated Minneapolis Southwest 2-0 at the Stardome at the Academy of Holy Angels.

Neither side showed much offense until the 18th minute. On its first corner kick attempt of the match, the Stars (15-0-1, 6-0) opened the scoring when freshman midfielder Eileen Braun headed the kick from senior midfielder Catherine Duffy Shaw into the back of the net.

Later in the half, Holy Angels, No. 2 in the Oct. 2 Class 2A coaches’ poll, doubled its lead thanks to its speed. Rushing down the field, freshman forward Elizabeth Mejia scored off a pass from junior forward Kathryn Van Sloun.

After a two-goal first half, the Stars were kept off the scoreboard as Eowyn Simon made four saves for Minneapolis Southwest (5-6-3, 2-1-1). She came in after Lakers goalkeeper Piper Sorock stopped three of the five shots on goal she faced.

Minneapolis Southwest was unable to beat Holy Angels goalkeeper Chloe Sandness. The junior stopped each of the seven shots she faced in a winning effort. 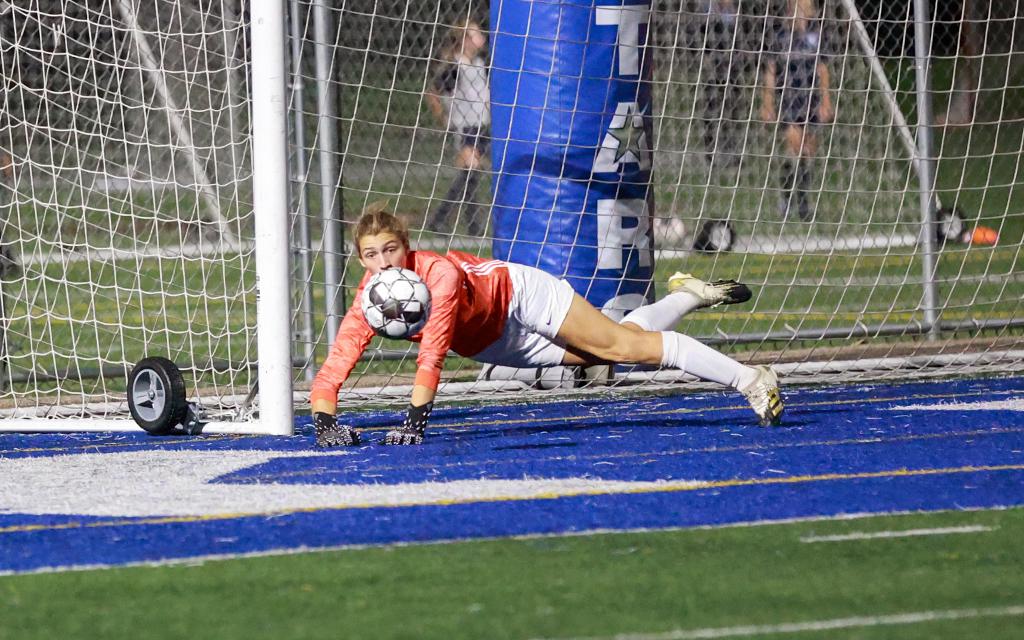