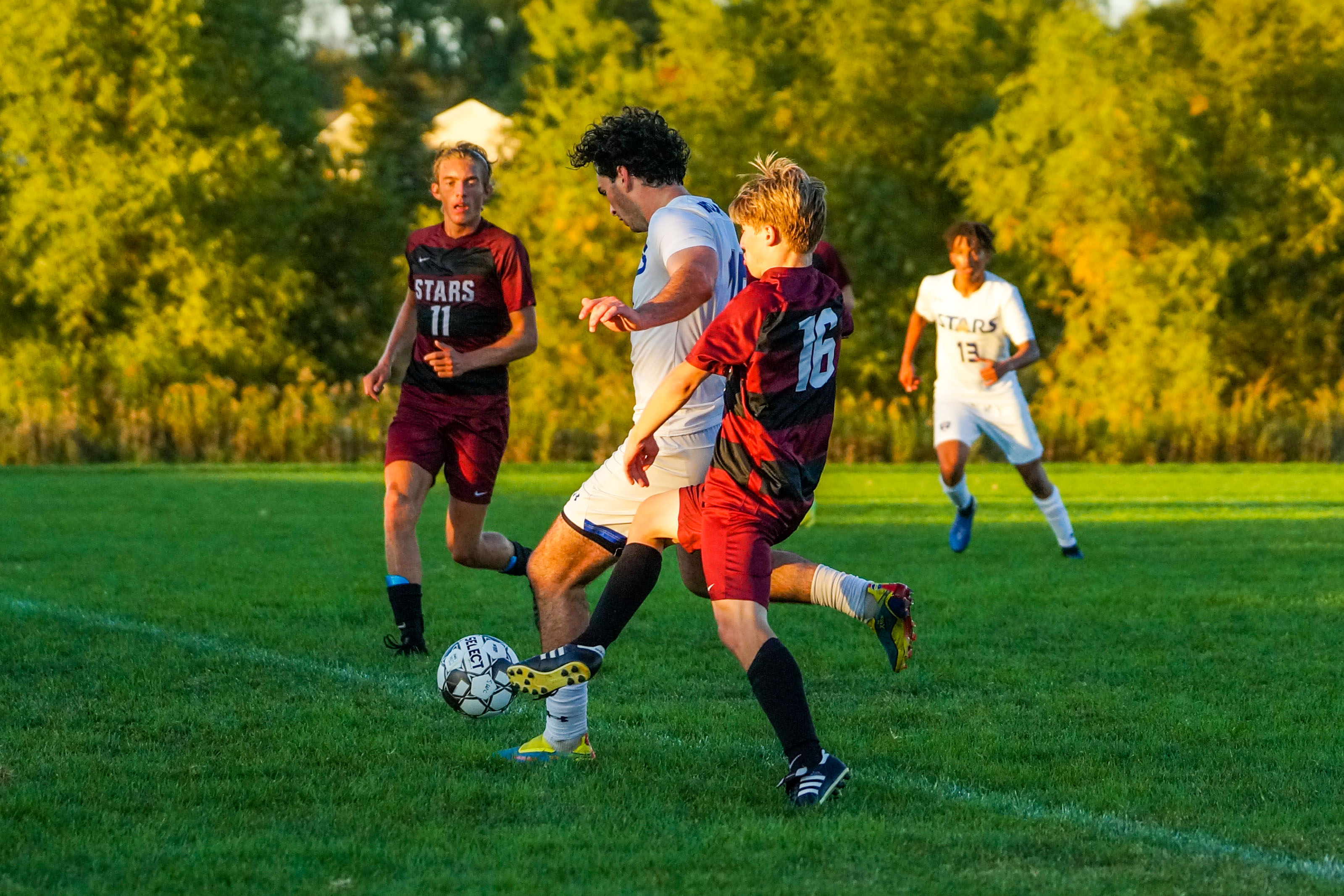 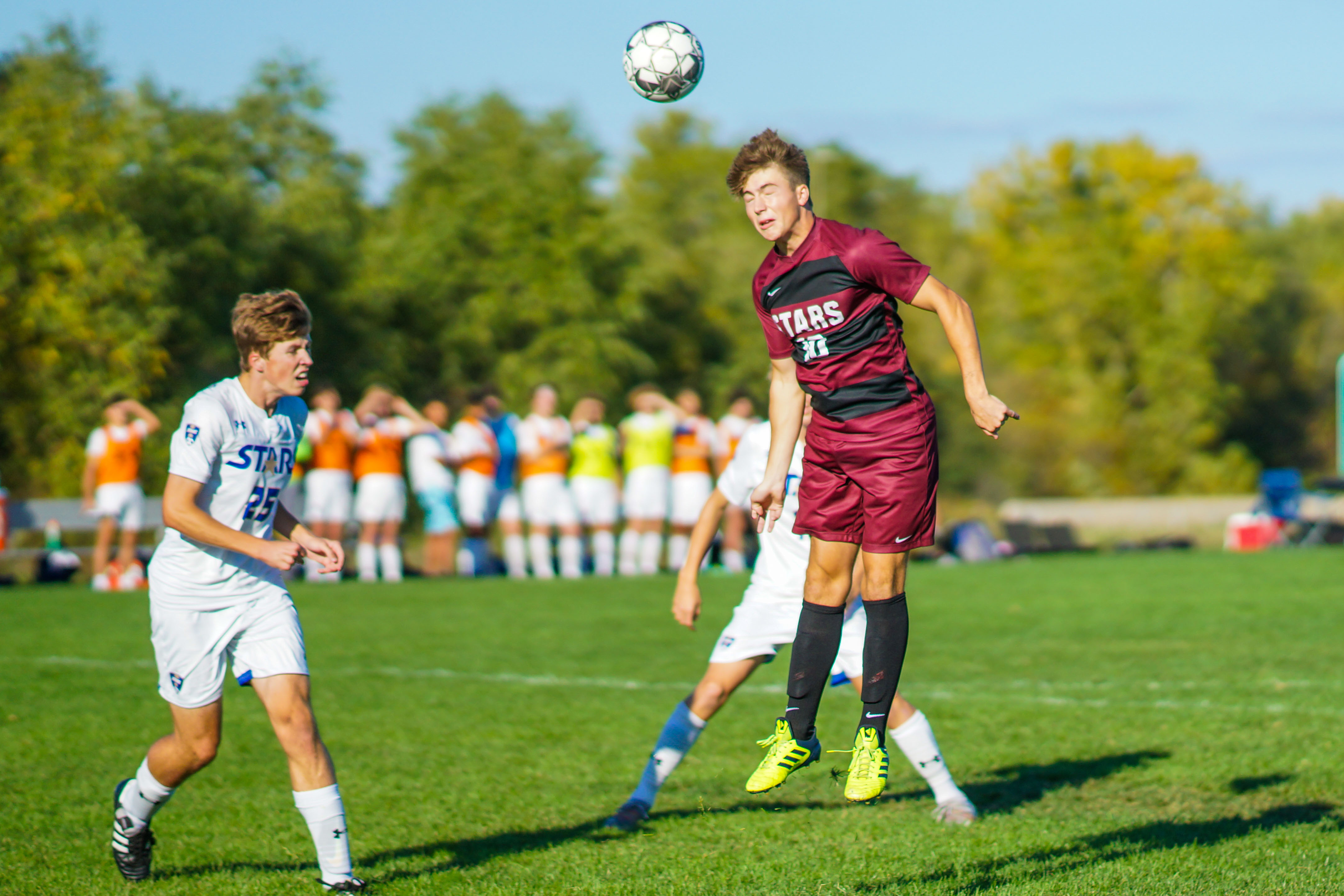 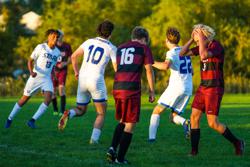 Scoring a combined 31 goals this year, Holy Angels’ Carter Hermanson and Aidan Smith have packed an offensive punch for the 2019 state champions, and did so once again Tuesday night.

Hermanson scored two goals and Smith scored the game-winner, helping No. 8-2A Holy Angels to a 3-2 win over Southwest Christian.

In a back-and-forth game between two evenly matched teams, No. 4-1A Southwest Christian (9-3-3) found themselves up 1-0 early after Jon Brain scored a goal at the 10 minute, 16 second mark.

Holy Angels countered with two goals to end the half, both coming from senior forward Hermanson, to give the road team a 2-1 lead at halftime.

“Aidan slipped me a really nice ball,” Hermanson said. “I just found it at my feet and I knew I had to shoot it cause I wouldn’t get enough time to get anymore touches. It was just a good find from Aidan.”

Southwest Christian’s Camden Mellema scored his second goal of the year in the 59th minute, which knotted things back up 2-2 and led to a thrilling and chaotic finish.

Both Hermanson and Southwest Christian’s Jake Boike had good looks at the net but missed their shots. Ultimately, it was Smith who took the ball off the rebound and punched in, scoring his 13th goal of the year and securing the win for the road team.

“I was kinda looking for a ball over and [Shalim Montes Hernandez] had a shot that banged off the bar,” Smith said. “It just landed at my feet.”

The goal capped a 10-3-2 season for Holy Angels, and a remarkable season for Hermanson, whose two goals helped the senior forward finish with 18 goals and 18 assists on the season.

“I always feel like, when worst comes to worst, just give it to Carter,” Smith said. “He usually can make things happen.”

Smith mentioned the ease at which the game can be played when a guy like Carter is out on the field night in and night out.

“It’s a lot of fun to play with a kid with that high of quality in high school soccer,” Smith said. “Especially when a lot of teams aren’t really typically prepared for someone like him, it just makes the game a lot more fun.”

Hermanson has been on the team since he was a freshman and led the team in scoring and assists this season.

“We won’t know till we miss him,” Holy Angels head coach James See said when asked what it’s like having a guy like Carter on the field.

“The kid has just been a continuous return over and over,” See said. “Carter’s flexible. He played multiple roles today. Last year he had to do the same, you can ask him to do something selfless and go play back in the back. He can play midfield, he can play upfront … he can go in and do anything for us”

It was the second straight game scoring two goals in a game for Hermanson.

“Everyone wants to play for everyone,” Hermanson said. “They’ll play any ball just to win it for their teammates. Everyone playing for each other has really helped me and as a whole helped the group.”

With section tournaments beginning next week, See understood the importance of the win, but she stressed the bigger picture to his team following the game.

“It’s been kind of a tough year,” See said. “There’s a little bit more passion in that because of where we are and what we’ve been going through.”

See was glad the team came out on top, and hopes the team uses that momentum going forward.

“The dial’s turned,” he said. “Postseason is here.” 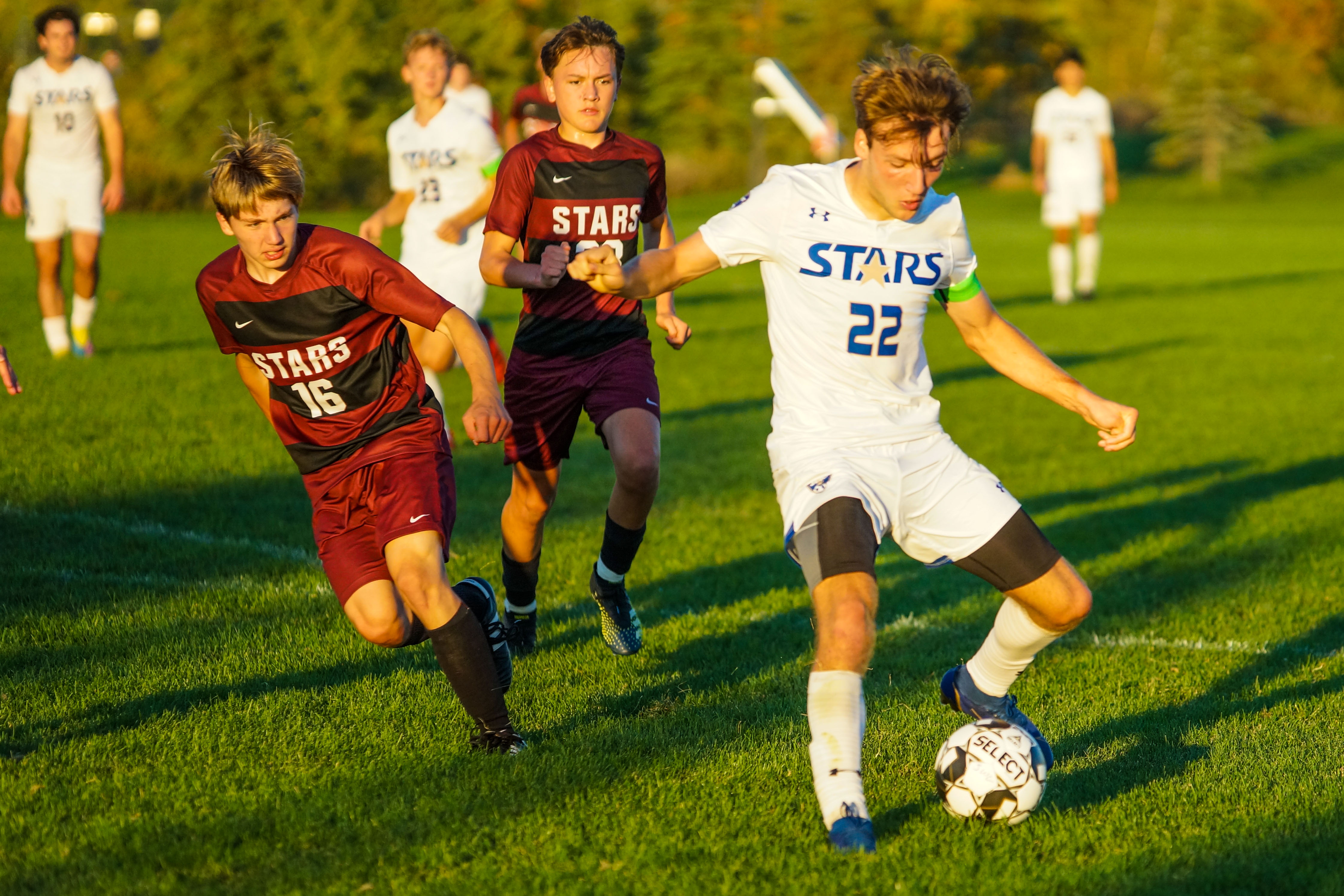 An eventful first half saw three goals, first coming from No. 4-1A Southwest Christian’s Jon Brain, who scored his fourth goal of the season at the 10 minute, 16 second mark of the first half.

Holy Angels (10-3-2) got on the board after Carter Hermanson tapped in a header after his teammate’s shot hit the top of the cross bar and rebounded right to Hermanson.

Hermanson missed a penalty kick in the final minutes of the first half, but redeemed himself when he scored his second goal of the game, taking a pass from Smith and finding the back of the net, giving No. 8-2A Holy Angels a 2-1 lead at halftime.

Southwest Christian’s (9-3-3) Camden Mellema knotted things back up 2-2 after taking the ball near midfield and bringing it all the way into Holy Angels’ zone, scoring his second goal of the year.

The final minutes of the game saw multiple scoring opportunities from both teams, with Hermanson and Southwest Christian’s Jake Boike missing open shots. The dagger, however, finally came for Holy Angels when Smith scored on a rebound. After the ball fell to his feet near the goal, Smith tapped in his 13th goal of the year that secured the win for the road team.