The Red Knights kept their undefeated season alive by dominating on defense. 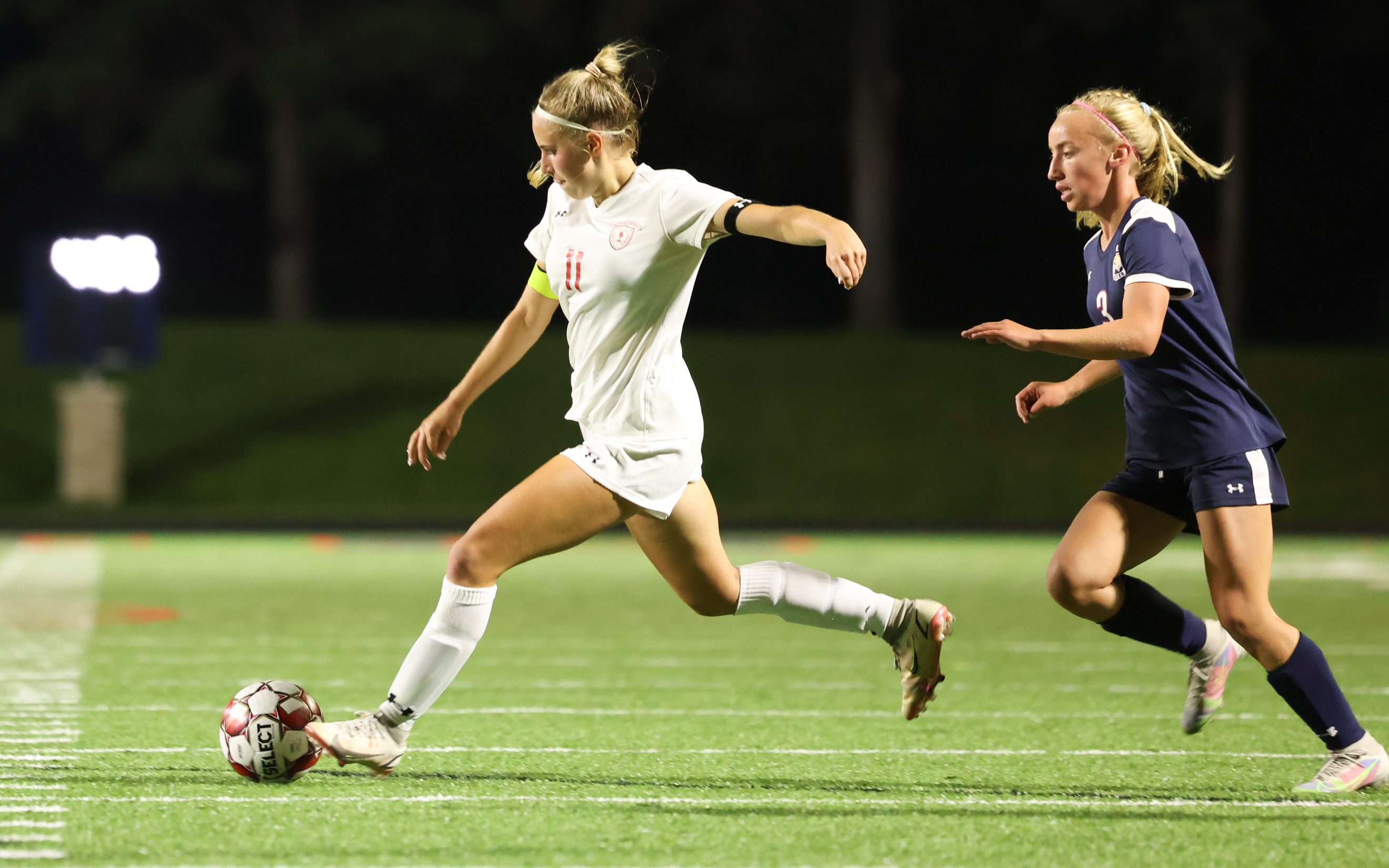 Benilde-St. Margaret's Sydney Drees (11) dribbles away from Orono’s Eva Pinske (3) during Tuesday night’s match in Orono. Drees’s first half goal was enough for the Red Knights to earn a 1-0 victory over the Spartans. Photo by Jeff Lawler, SportsEngine

Eleven games into the season and Benilde-St. Margaret’s has looked close to perfect. A team that has scored at least five goals in eight games this year consistently showcases the offensive juggernaut that is is.

On Tuesday night, however, it was the defense that stepped up, shutting out No. 7 Orono (5-4-1) to clinch a 1-0 win in Class 2A soccer at Orono High School.

Five minutes into the Metro West Conference clash, the game looked like it could be another runaway game for the Red Knights when senior Sydney Drees scored her eighth goal of the year to give Benilde-St. Margaret’s a 1-0 jolt early.

“I just saw the ball coming to me, and I saw the entire corner open,” Drees said. “I just tried to stay composed and finish it.” 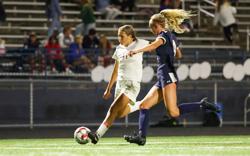 Despite that early success, the game became a battle of defense and trying to gain good looks at scoring opportunities.

“Give them credit,” Benilde-St. Margaret’s head coach Scott Helling-Christy said. “We had some good chances. I think we had more chances than they did. Unfortunately, we just didn’t put them in the goal.”

Spartans senior goalie Harper Randolph helped keep Orono in the game, coming up with numerous saves, ultimately totaling eight saves on the night. That effort helped keep No. 1 Benilde-St. Margaret’s (11-0) out of the net for the remainder of the game.

That didn't seem to matter as the Red Knights suffocated Orono (5-4-1) any time the Spartans got the ball into the zone. That effort and tenacity, led by senior defender Avery Junker, helped keep the Spartans off the scoreboard.

“We’re all playing defense as a team,” Junker said. “We all have a lot of trust in each other and we are all just constantly communicating marks and making sure we got each other’s backs.”

That trust and level of communication has paid off this season. Benilde-St. Margaret's has allowed just three goals all season long, and Tuesday’s shutout was the team’s ninth of the season.

“That’s one of the things that our defenders, our goal keeper … that’s their pride, to be able to get the shutout,” Helling-Christy said.

The Spartans had just three shots on goal, a marker for how effective the Red Knight defense was, and how difficult it was for the home team to find scoring chances.

“We’re going into the games with the same mindset,” Junker said. “We’re here to play, to work hard, we’re here to work for each other.”

Hopes and aspirations for a team this successful are high. Nine of the 11 starters for Benilde-St. Margaret’s are seniors who have been together and played together for numerous years. Those seniors were a part of the 11-1-1 season last year, which was cut short and ended after the section tournament, a tournament in which the Red Knights are reigning champions.

“A lot of us have been on the team for three years now,” Drees said. “This has been a dream for us, our senior year. We knew this was going to be our year to do it.”

Winners of 11 section titles since 2005, the Red Knights will have to do it again if they want a chance at the top prize.

“This year we’re just coming out hard and working to get back there,” Junker said. ‘Because as Sydney was saying, we really have a great group of girls here and we’re all just working really hard for it again.” 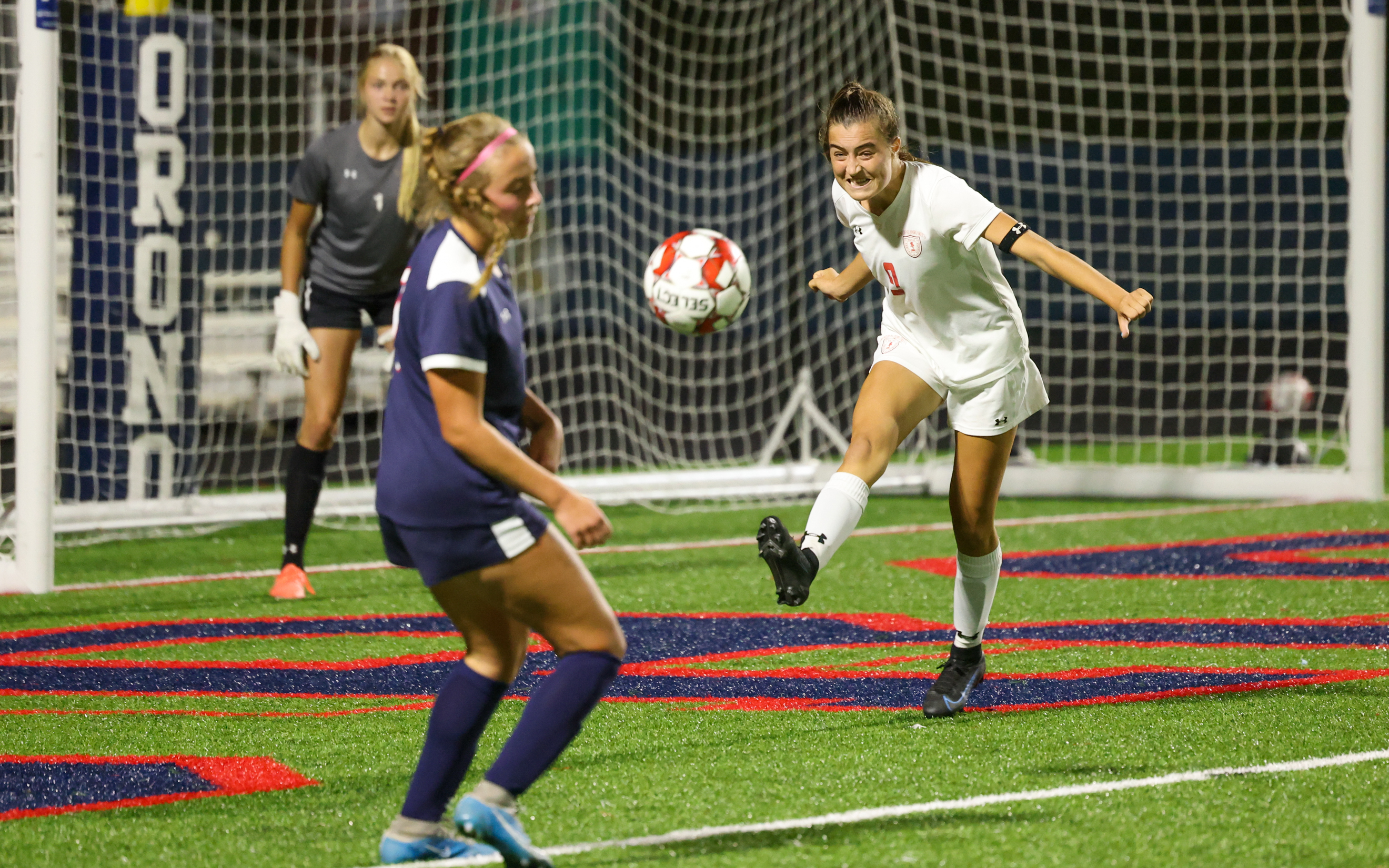 The Red Knights got on the board early when Sydney Drees, on the rebound, found the open net and made it a 1-0 game at the four minute, 40 second mark of the game.

No. 1-2A Benilde-St. Margaret’s (11-0) controlled the majority of the possession with numerous open looks at the net. Kiya Gilliand’s shot hit the top crossbar when she was found open in the middle of the zone, and Maddie Shannon’s chip shot just missed left.

The No. 7-2A Spartans (5-4-1) had moments where the ball was able to get into the Red Knights’ zone, but the swarming Benilde-St. Margaret’s defense kept the home team out of the net.

At one point, Orono’s Kayla Kallenbach fed Corrinne Field near the middle of the zone, but her shot was saved by Red Knight keeper Olivia Olson.

Orono keeper Harper Randolph tallied a couple big saves to keep the Spartans within striking distance throughout the second half. The senior goalie finished with eight saves on the night.

The second half was scoreless despite the myriad of scoring opportunities for the Red Knights. They finished with nine shots on goal compared to Orono’s two.

Benilde-St Margaret’s remains perfect on the season, while Orono drops its third game of the season. 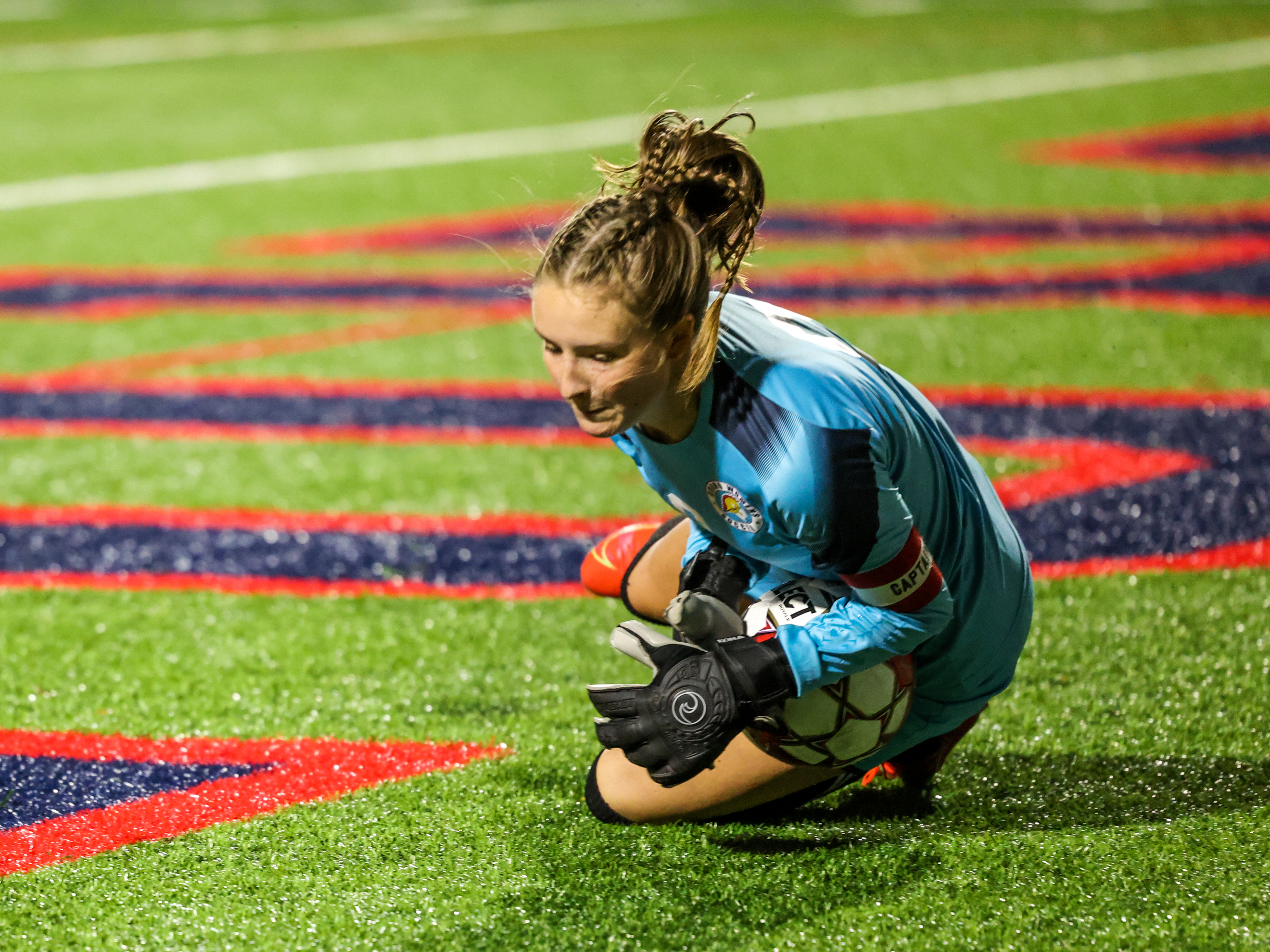 Orono’s Harper Randolph makes one of her eight saves against Benilde-St. Margaret’s Tuesday night. The Spartans fell to the Red Knights 1-0 despite Randolph’s stellar play in goal. Photo by Jeff Lawler, SportsEngine