Ava Grate, one of nine 11th graders in the starting lineup for the Irish, scored the game-tying and go-ahead goals less than two minutes apart in the second half to push past the Ponies. 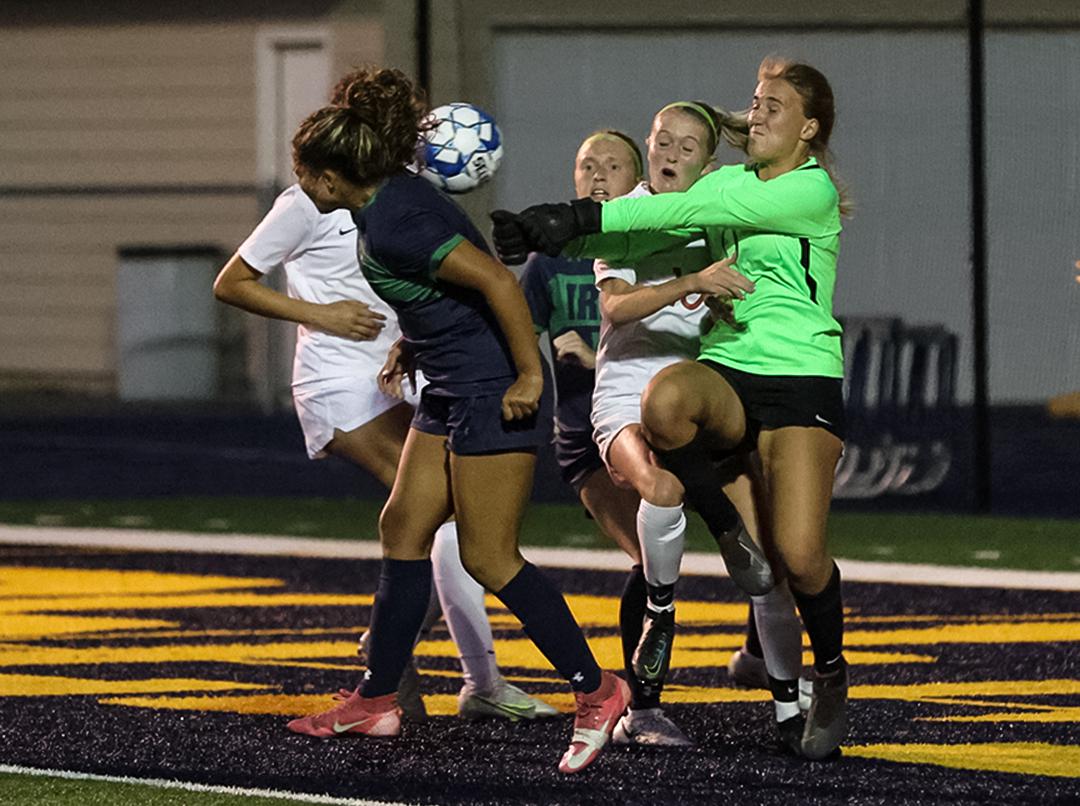 Rosemount's Ava Grate heads the ball past Stillwater goalkeeper Hadley Johnson to score her second goal in under two minutes and help the Irish to a 3-1 victory over the Ponies. Photo by Cheryl A. Myers, SportsEngine

Many of the players on Rosemount girls’ soccer team have already experienced plenty of big games in their high school careers.

In the past two seasons, the Irish qualified for the state tournament in 2019 and played in a section championship game last fall.

As it is still August, Tuesday’s 3-1 victory over Stillwater might not carry the same weight as a game in a section or state tournament bracket. However, with both teams heading into the week carrying top-three rankings in the Class 3A coaches’ preseason poll, it still was a notable early season test.

Looking at the Rosemount starting lineup, it is easy to see that a large class of juniors is helping provide a spark for an Irish team aiming to build on its recent success. Nine players in the team’s starting lineup Tuesday are 11th graders and many already have experience as varsity contributors. 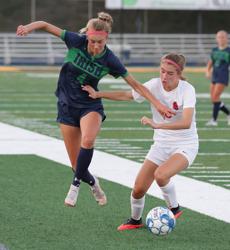 Ava Grate, who scored the game-tying and the go-ahead goal in a span of two minutes in Tuesday’s win, pointed out she and her teammates like to hang out away from the field as well.

“We’re always together, and not just at soccer, too,” said Grate. “We’re all like best friends. We love playing for each other and winning games.”

Grate added that she and a handful of the other players on the Rosemount roster also play club soccer with Minnesota Thunder Academy.

Rosemount head coach Gretchen Stramel has already seen plenty from the junior class. She said five of the team’s current 11th graders have been varsity players since their freshman year.

The 2019 Irish won the Class 2A, Section 3 title before finishing third in the state tournament. Last year’s team also played in the section championship where they lost to Eagan 1-0.

Teams from high schools with the state's largest enrollments, such as Rosemount and Stillwater, have bumped up to the newly created Class 3A this fall. And while they already have experienced plenty of recent success, the Irish (4-0, 0-0) are not trying to get too far ahead of themselves this fall.

“We like to take each season at a time,” Grate said. “We’re not looking back at last season, this is a new season. We want to keep it going and play hard every game."

Stillwater is also a program that can rely on returning experience from a successful 2020. The Ponies did not lose a game on their way to the Class 2A, Section 4 title.

Head coach Mike Huber said the Ponies (1-1, 0-0) have a large core of returning experience but that a majority of last year’s goals were scored by now graduated players.

“We have youngsters that are coming up and helping out, and we do have a very large seniors class,” Huber said. “It will take some time, and it is a little bit of a learning curve.” 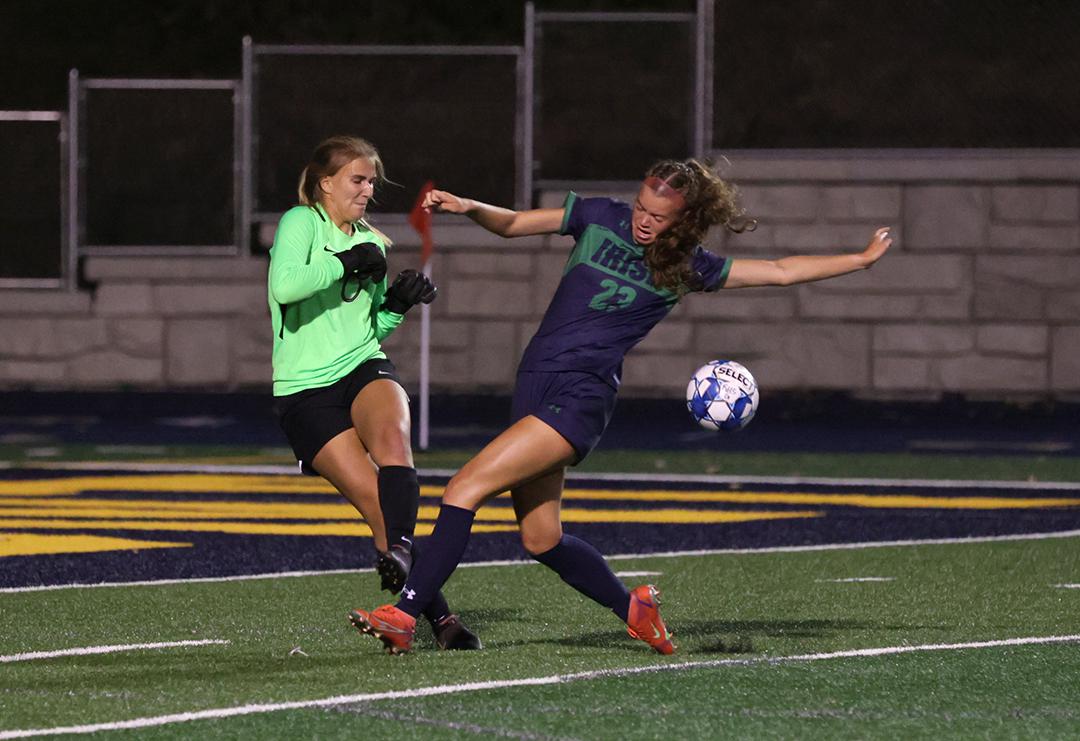 Rosemount's Shay Payne (23) blocks the kick of Stillwater goalkeeper Hadley Johnson. Payne scored the third of the Irish's three unanswered goals in the second half on Tuesday night. Photo by Cheryl A. Myers, SportsEngine

It took more than 40 minutes to get on the scoreboard, but Ava Grate and Rosemount’s sustained attack outlasted Stillwater in its 3-1 victory, a matchup between two of the top-three ranked Class 3A teams in the coaches' preseason poll for girls’ soccer Tuesday in Rosemount.

Stillwater, No. 2-3A, led 1-0 after 40 minutes of play thanks to a 30-yard goal from Brooke Nelson that put the Ponies ahead in the first half.

But Rosemount, which led in shots throughout most of the game, broke through almost 15 minutes into the second half when Grate tipped a ball past Stillwater’s goalkeeper to make it a 1-1 tie. The junior found the back of the net again less than two minutes later, putting the Irish ahead for good.

Shay Payne added one more goal for the Irish with less than seven minutes remaining to extend the lead.
Rosemount, No. 3-3A, was helped by goalkeeper Jordan Hecht who made six saves. Stillwater goalkeeper Hadley Johnson made 14 saves in the loss. 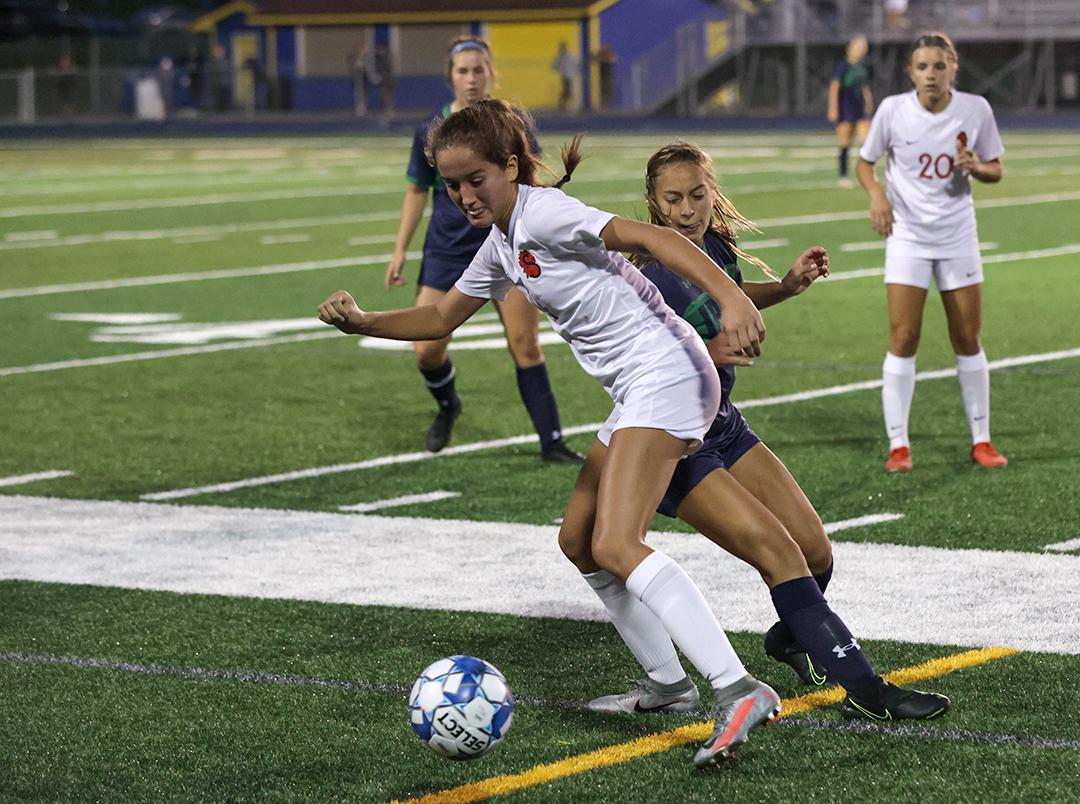 Brooke Nelson scored in the 18th minute of the first half, the Ponies' only goal in a 3-1 loss to Rosemount. It was Stillwater's first loss since the 2019 season. Photo by Cheryl A. Myers, SportsEngine