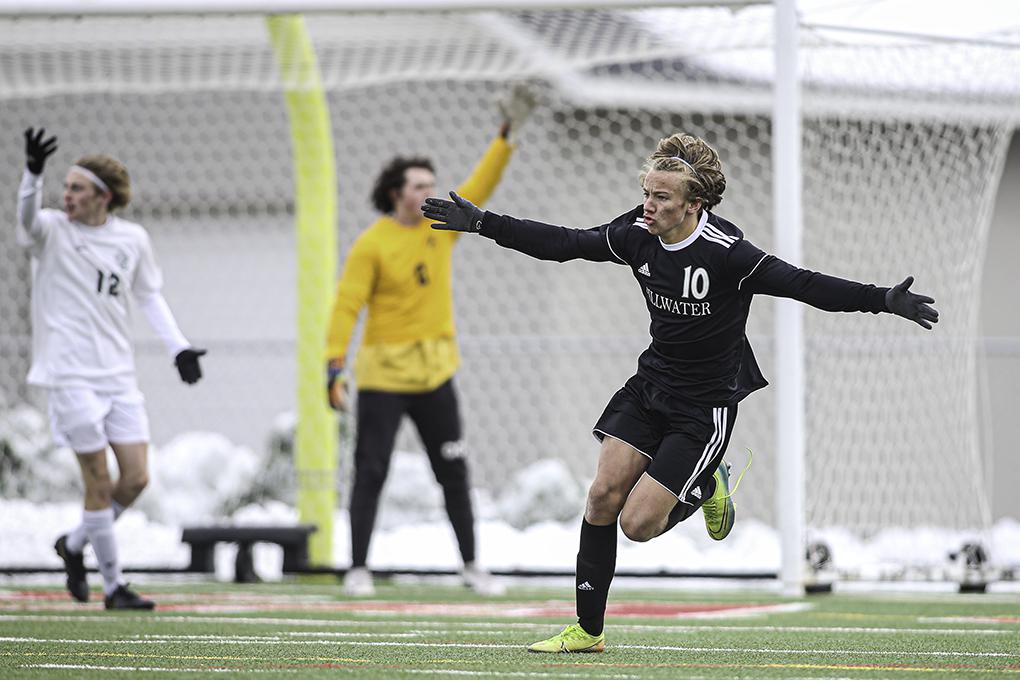 Riley Buxell (10) celebrates his goal with two minutes left in the first half of the Class 2A, Section 4 boys' soccer championship. It was the game's only goal in Stillwater's 1-0 victory over Park of Cottage Grove. Photo by Mark Hvidsten, SportsEngine 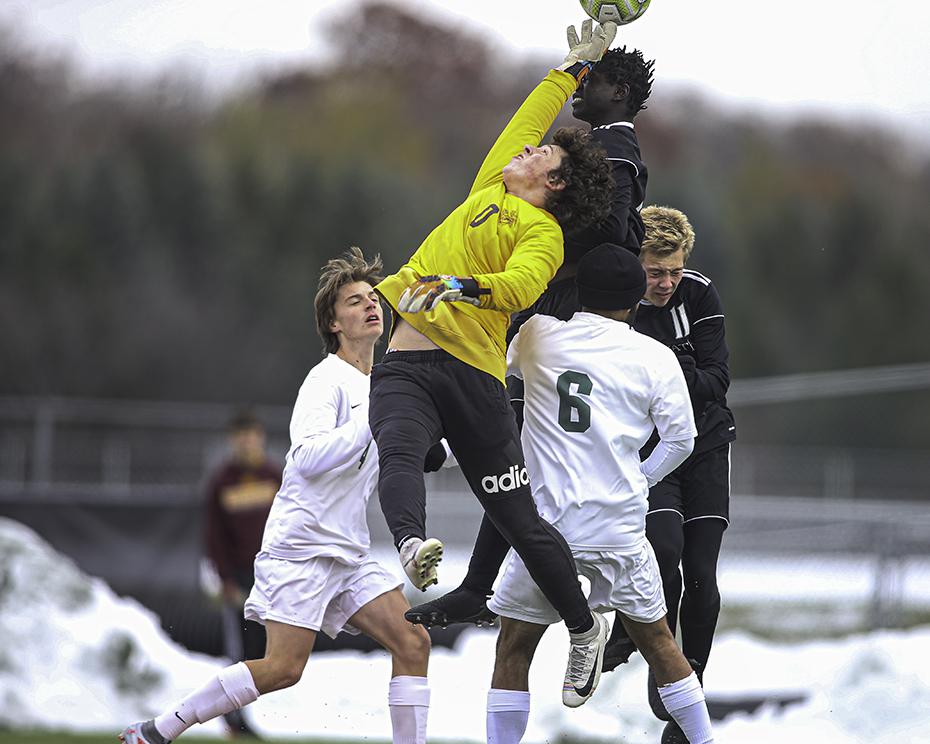 Park of Cottage Grove goaltender Max Neitz gets his hand on the ball and away from Stillwater's John Wacker. Neitz had 11 saves. Photo by Mark Hvidsten, SportsEngine

Riley Buxell was just doing what he was asked to do. He didn’t expect to end up with both the ball and a wide-open look at the goal.

But there he was, with two minutes left in the first half of a scoreless Class 2A, Section 4 boys’ soccer championship game. With the ball. With the look.

He didn’t waste the opportunity.

Buxell scooted a shot to the right side of Park of Cottage Grove goalkeeper Max Neitz and into the far corner of the net. It was all second-seeded Stillwater needed for a 1-0 victory and a fourth section title in the past five seasons.

Another state tournament appearance, at least one sanctioned by the Minnesota State High School League (MSHSL), is not in the cards for the Ponies (10-2-2) this fall. It’s possible, however, that the 16 section champions — eight in Class 2A and eight in Class 1A — will decide to play in an unofficial tourney organized by a parents’ group. That decision may come as soon as Sunday.

But if the season ends without an opportunity to compete for a state championship, Stillwater coach Jake Smothers is fine with that.

“We’ve just looked at every game we’ve played this season like a gift,” Smothers said of a season that was imperiled by the COVID-19 pandemic. 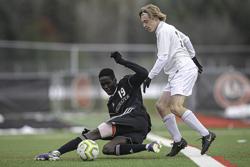 Buxell’s goal was another sort of gift, one born of a lucky — or unlucky, depending on your point of view — bounce.

Smothers said the Wolfpack defense had been doing a good job of clogging up the area around the net. He sent his forwards further out from the goal to try and get a clearer shot on net.

Buxell, a junior, took the instructions and floated a little further out. When Gora Gora, the Ponies’ leading scorer with 13 goals this season, tried to force the ball toward the net, it hit a Wolfpack defender and bounded toward Buxell.

He had enough time to take a step or two toward Neitz and put in a little stutter-step before he directed the ball toward the goal.

Neitz, playing for injured starter Jakob Leonard, had neither the angle nor a chance to come up with a save.

Wolfpack players appealed to officials for an offside call that never came.

Neitz drew high praise from both benches for his play. He took a lot of hits and made 11 saves, several of them in spectacular fashion.

Park of Cottage Grove was never able to threaten the Stillwater goal. And it was asking too much of a group that relied so heavily on defense and goalkeeper play all season.

Park of Cottage Grove (4-10-0) ended the regular season with just two victories, and had scored only three goals in 10 games before beating Irondale 6-1 in its last game before the section tournament.

Wolfpack coach Andrew Bourgoine, in his second season with the team and first as its only head coach, said he was happy with his team’s effort, but that they just didn’t have the offensive punch to get past an aggressive and high-scoring Stillwater team.

The Class 2A, Section 4 boys’ soccer championship game Saturday afternoon at Stillwater turned on the random bounce of a deflected pass. Stillwater junior Riley Buxell took advantage of the loose ball and scored with two minutes left in the first half to give the second-seeded Ponies a 1-0 victory over No. 8 seed Park of Cottage Grove.

Gora Gora's play toward the net bounced off a Park of Cottage Grove defender and toward Buxell, who was all alone to the left side of Wolfpack goalkeeper Max Neitz. Buxell had the angle, and most of the right side of the net to work with, and he buried the ball in the corner.

The game-winning goal was the second of the season for Buxell, who scored the game's only goal in an Oct. 2 victory at Woodbury.

The loss ended an inspiring run for Park of Cottage Grove (4-10-0), which won just two games during the regular season before beating top-seeded East Ridge 2-1 in a quarterfinal matchup, and White Bear Lake 1-0 in a shootout to advance to the section championship.

Neitz, the Wolfpack's backup goalkeeper, was pressed into service because starter Jakob Leonard broke his thumb during the semifinal victory over White Bear Lake. Neitz had 11 saves Saturday and faced intense pressure most of the match.

The Ponies (10-2-2) won’t get the chance to play in a fourth state tournament in the past five years due to the COVID-19 pandemic. The Minnesota State High School League (MSHSL) will not be sponsoring an official state tournament this year, but section champions could decide as soon as Sunday if they will play an unsanctioned state tournament organized by a parents' group. 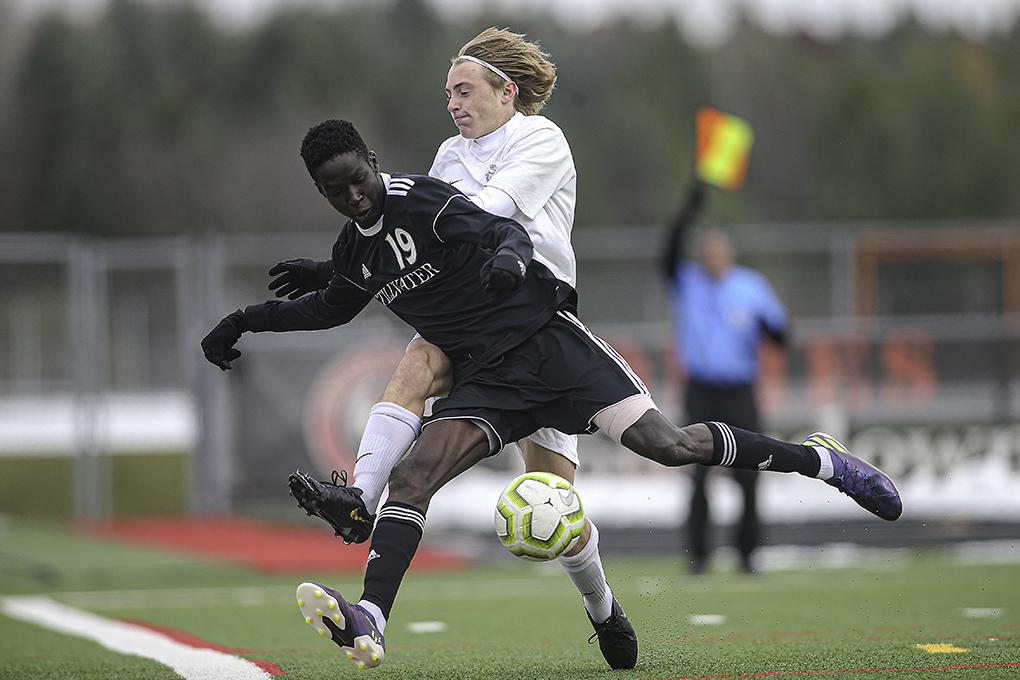 Stillwater's Gora Gora (19) collides with Park of Cottage Grove's Lucas Bollback in the second half. Gora assisted on the game's only goal. Photo by Mark Hvidsten, SportsEngine