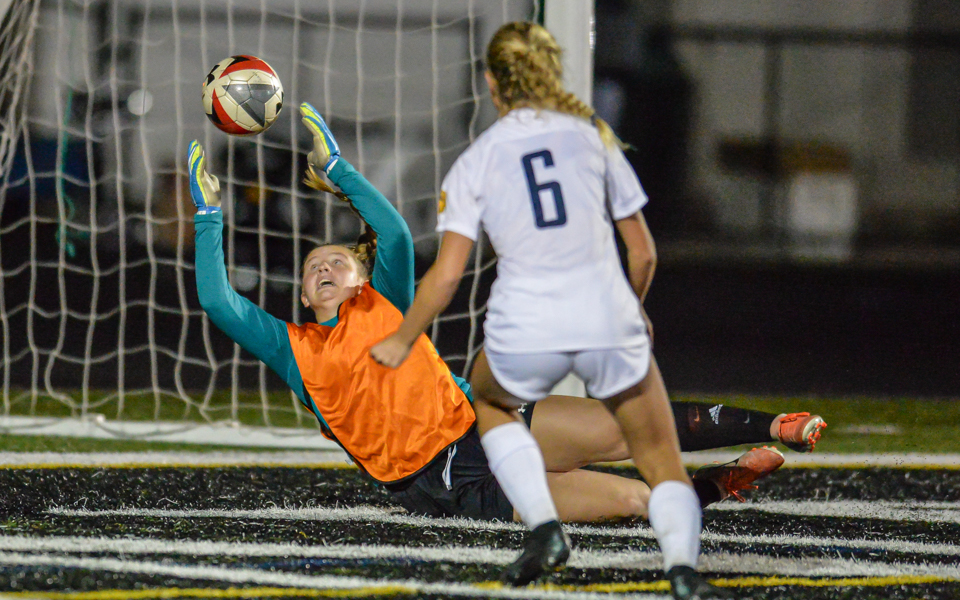 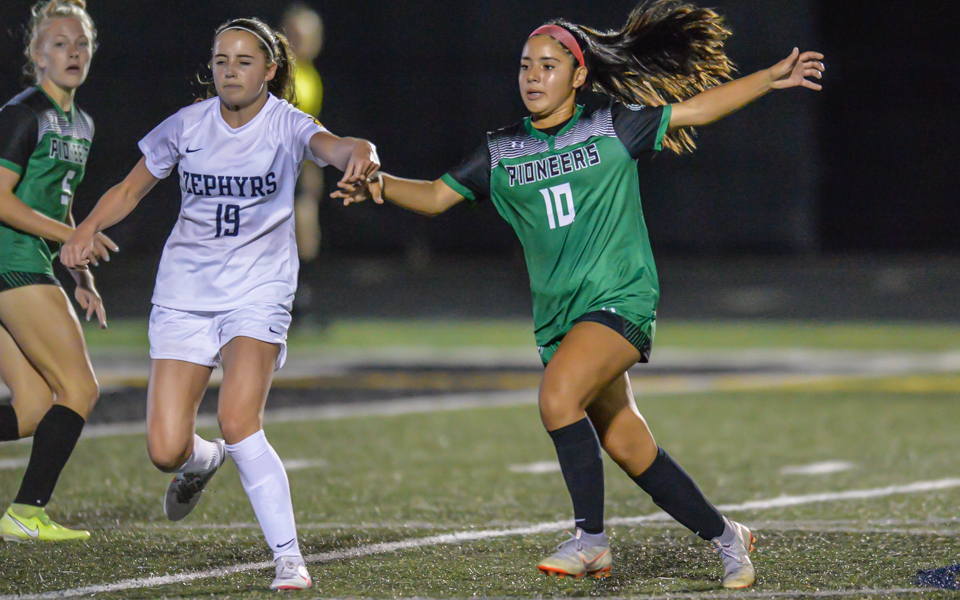 Hill-Murray's Ariadna Vargas scored the game's lone-goal in the Pioneers' 1-0 win over the Zephyrs Thursday night. The Pioneers handed Mahtomedi its first defeat of the season. Photo by Earl J. Ebensteiner, SportsEngine

Hill-Murray plans to enjoy its win Thursday night over three-time defending Class 1A state champion Mahtomedi, but the Pioneers know a high-stakes rematch could soon be on the horizon.

The rival schools are separated by just 6 miles and have met in the last four Class 1A, Section 4 championship games. The Zephyrs won the last three en route to state titles each time.

“It’s always meant a lot to us, just because it always comes down to us two in the section final,” said Hill-Murray senior captain Kate Olson. “We played our hearts out and it felt so good to win. We moved the ball really well.”

Mahtomedi, ranked No. 3 in the Class 1A coaches’ poll, entered the night having allowed just two goals in four games this season. The Zephyrs had another standout defensive showing for two thirds of Thursday’s match. 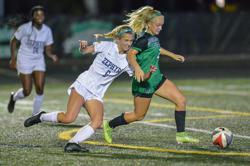 Vargas’ goal was the Pioneers’ first shot of the game on net. A cross from the left set Vargas up for a close-range goal which snuck in on the low right side.

“[Mahtomedi's] very strong defensively. They’re a very organized team,” said Hill-Murray coach Simbo Ndiaye. “It was hard to break the line. We did a couple times, but the forwards were running a little too late. Finally it paid off."

Mahtomedi had three shots in the first half on Hill-Murray goalkeeper Natalie Humbert, who made a few of her seven total saves in diving fashion. Her efforts helped preserve her team’s fourth straight shutout, as she wasn't afraid to shy away from contact to make a stop.

“I think we didn’t come to play. I say we played pretty nervous,” said Mahtomedi coach Dave Wald. “Our first touch, every ball was jumping up in the air instead of staying on the ground. We couldn’t connect any passes, I think we made one or two of our first 30. We just played nervous. We were feeling our 14 days off from quarantine. We just weren’t sharp.”

The Zephyrs’ seven-game, conference-only regular season schedule was trimmed to just five matches due to COVID-19. In early September, both the school’s girls’ and boys’ soccer programs announced having had a positive COVID case, leading to a 14-day quarantine. Games against North St. Paul and Tartan were not made up and Thursday’s game was rescheduled from Sept. 1.

Hill-Murray had been in the top-10 rankings, peaking as high as No. 4 in the preseason coaches’ poll, until this week, when the Pioneers were left outside for the first time this season. Perhaps Thursday’s performance against the defending champs will move the Pioneers back in.

“[Midfielder] Ella Runyon played a really great game moving the ball around a lot and Ari had a great finish,” Olson said. "It feels good. It’s been a while. It’s been since my sophomore year since we’ve beat them.”

The Pioneers and Zephyrs next compete in the Metro East Conference tournament, which will include all eight league teams. The tournament was created unique this season to crown a conference champion. It’ll have the league’s bottom four and top four teams competing in separate three-game, round-robin schedules. Games are Sept. 29, Oct. 2 and Oct. 6 at high seeds.

Hill-Murray, Hastings, Mahtomedi and Henry Sibley project to be the top four teams with final seeding to be determined. North St. Paul, Tartan, Hastings and South St. Paul, meanwhile, look to be in the bottom half.

“We’re just going to keep working, you know?” Ndiaye said. “It’s a great victory, but it’s not over. We’re going to go back tomorrow and start grinding.”

An Ariadna Vargas goal midway through the second half helped Hill-Murray knock off three-time defending Class 1A state champion Mahtomedi in Thursday’s regular-season finale for the Metro East Conference foes.

Vargas’ score with 18 minutes, 11 seconds remaining was the Pioneers’ first shot on goal of the game to that point. Mahtomedi, ranked No. 3 in the Class 1A coaches’ poll, had allowed just two goals entering the night, backstopped by junior goalkeeper Paige Janssen.

The Metro East rivals, which are separated by 6 miles, have met each of the last four years in the Class 1A, Section 4 championship match, with Mahtomedi prevailing in the last three en route to winning three consecutive state titles. 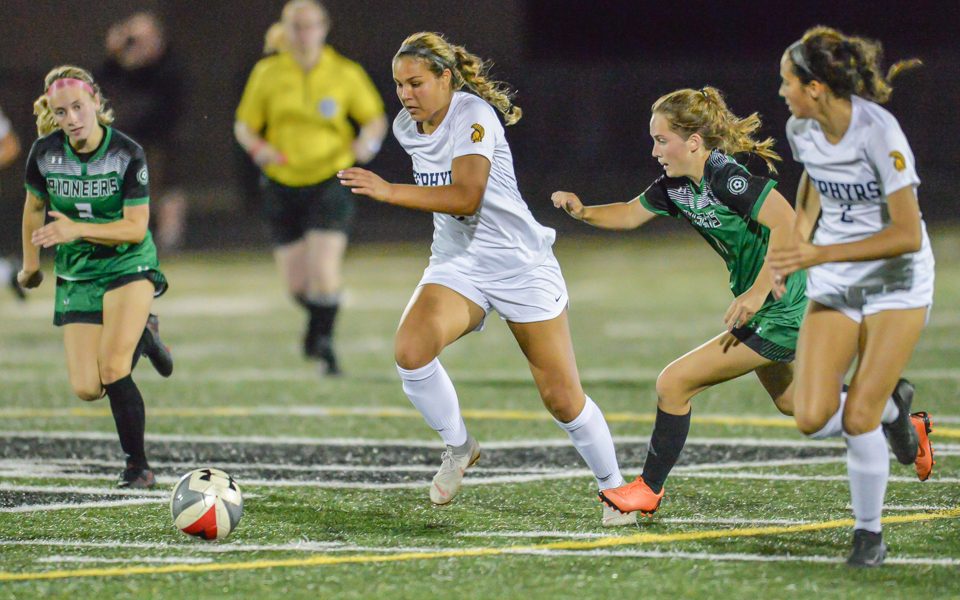 Mahtomedi’s Erika Broten splits the defense during a drive in the first half Thursday night in a Zephyr’s 1-0 loss to the Pioneer’s at Hill-Murray. Photo by Earl J. Ebensteiner, SportsEngine