Zachary Susee scored twice in the first half to help the Sabers roll past the Lightning and remain atop the South Suburban Conference standings. 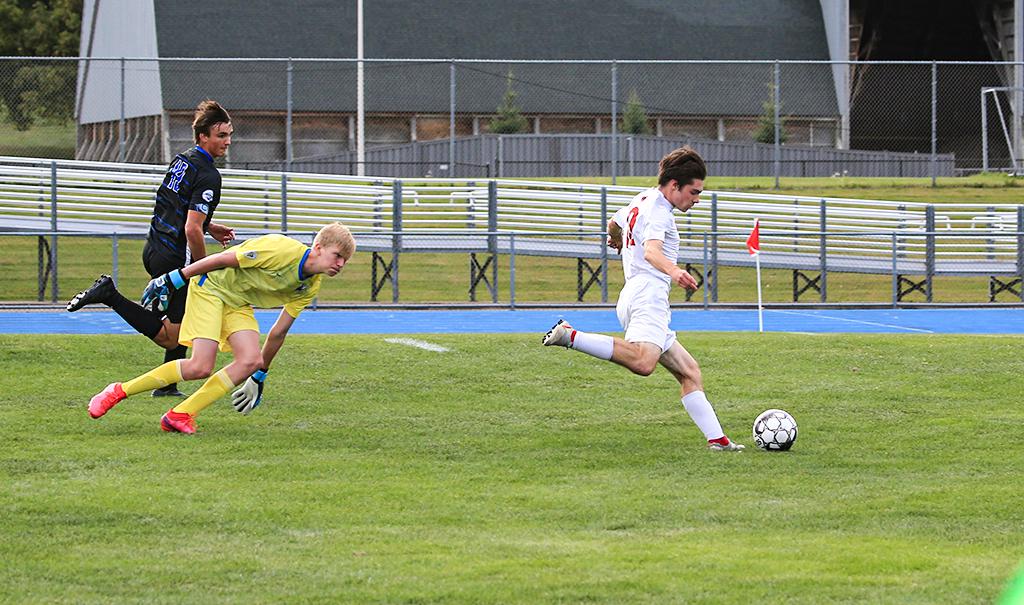 Zachary Susee (10) finds an empty net behind a pair of Eastview defenders for his 15th goal of the season. Susee scored twice to help bring down No. 4-2A Eastview on Thursday night. Photo by Cheryl A. Myers, SportsEngine 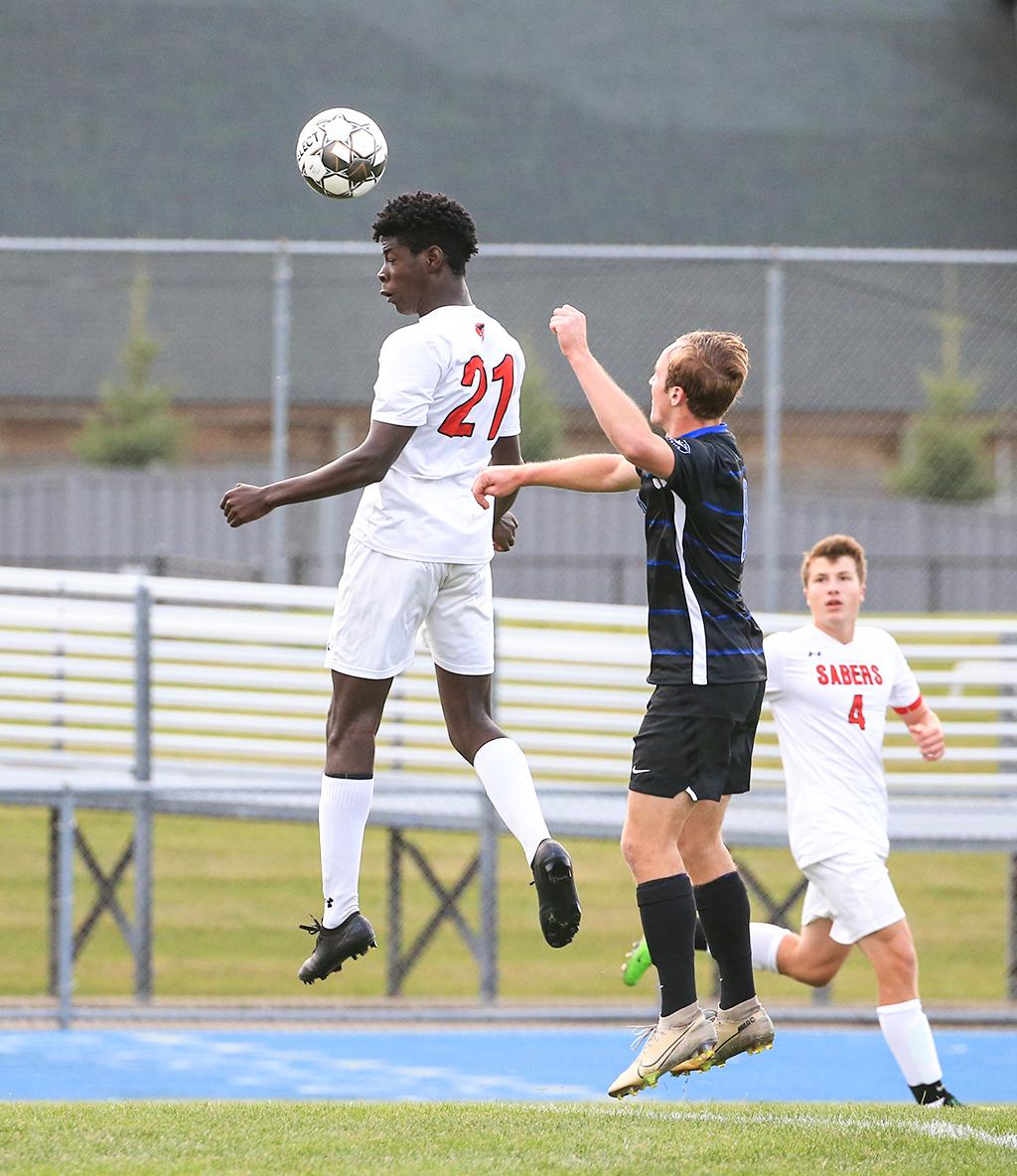 Looking at both Shakopee and Eastview’s season statistics prior to Thursday’s matchup, it was tough to infer which team would triumph in the South Suburban Conference tilt. The Sabers made quite the case to be the superior team after 80 minutes.

Shakopee came out in the first half in a big way at Eastview High School with three goals, proving to be more than enough to help the Sabers throttle rival Eastview 4-0.

A cursory look at the South Suburban standings before Thursday indicated Shakopee may be the better team as the Sabers have just one blemish this season. The Lightning, however, are ranked No. 4 in the Class 2A coaches’ poll and have played stingy defense this year, allowing four goals in their first six matches.

Eastview’s vaunted defense, however, showed a few chinks in its armor in the first half Thursday, starting when Shakopee junior Nate Dake knocked in a goal after collecting a rebound. 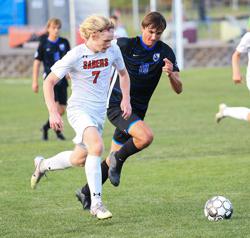 Sabers senior forward Zachary Susee took it from there, continuing his recent tear the rest of the half, scoring a pair of goals for the Sabers (5-1-1, 5-0-0) to give them a 3-0 advantage heading into the halftime break. Susee now has 15 goals this season, No. 2 in the state behind Duluth Denfeld’s Keegan Chastey who has 17 goals.

“Every year he comes back better,” Shakopee coach Jon Poppen said of Susee. “He’s faster than he was last year. He’s better in front of the net. The work in the offseason is what makes him better.”

At halftime, both coaches’ coincidentally emphasized the importance of which team scored the first goal of the second half.

“I told the guys at halftime to keep playing the way they’re playing,” said Eastview coach Scott Gustafson. “Whoever gets that first goal in the second half, that’s going to really dictate the tempo.”

Shakopee was the first and only team to score in the second half, as senior Tyler Grausnick tallied his seventh goal of the season in the 45th minute.

The Sabers held firm the rest of the game, seldomly allowing any quality chances for its conference rival to score.

Gustafson said after the match that some of his younger forwards have hit a bit of a slump, which proved to be bad timing for Thursday’s match against the Sabers.

“We’ve been making sure we have constant support so nobody’s left on an island one [versus] one,” Poppen said. “We’re doing things ahead of time to make sure one mistake isn’t costly.”

With their defeat of the Lightning (4-1-2, 2-1-2), Shakopee’s a team looking to enter the upper echelon of the state rankings while maintaining an advantage in the conference standings.

Eastview had allowed just one goal in four matches to start the season but the Lightning defense could not contain the Sabers in Thursday’s match at Eastview High School. The Sabers struck for three goals in the first half and kept the foot in the gas in a 4-0 triumph over the Lightning.

Shakopee (5-1-1, 5-0-0) recorded its first goal just three minutes into the South Suburban Conference tilt when Nate Dake pounced on a rebound to score. The rest of the first half was the Zachary Susee show, as the senior forward tallied the next two Sabers goals, giving him 15 goals this season.

In the second half, senior forward Tyler Grausnick became the third Shakopee player to score, making it 4-0 in the 45th minute. Senior Broc Dollerschell tallied an assist in the win.

The Lightning, ranked No. 4 in the Class 2A coaches’ poll, had no response to Shakopee’s offensive outburst. Eastview (4-1-2, 2-1-2) managed eight shots on net against junior keeper Nicholas Isensee. Eastview senior goalkeeper Andrew Kirchhnoff, meanwhile, had plenty going on in front of him, resulting in his making 15 saves. 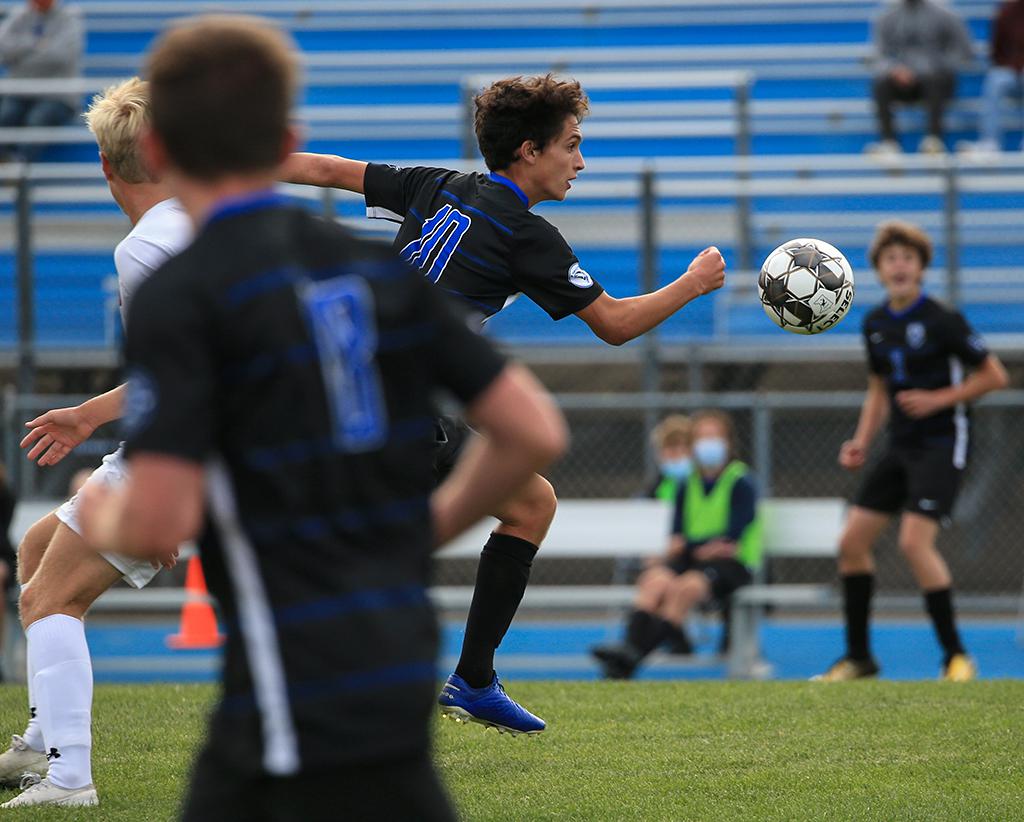 Sophomore forward Nicholas Karam (10) leads the Lightning in scoring this season with eight goals and three assists. Shakopee kept Karam and the rest of the Eastview team scoreless in a 4-0 win on Thursday night. Photo by Cheryl A. Myers, SportsEngine