Maille Mathis scored the only goal of the second half after each team tallied a pair of goals in the opening 40 minutes. 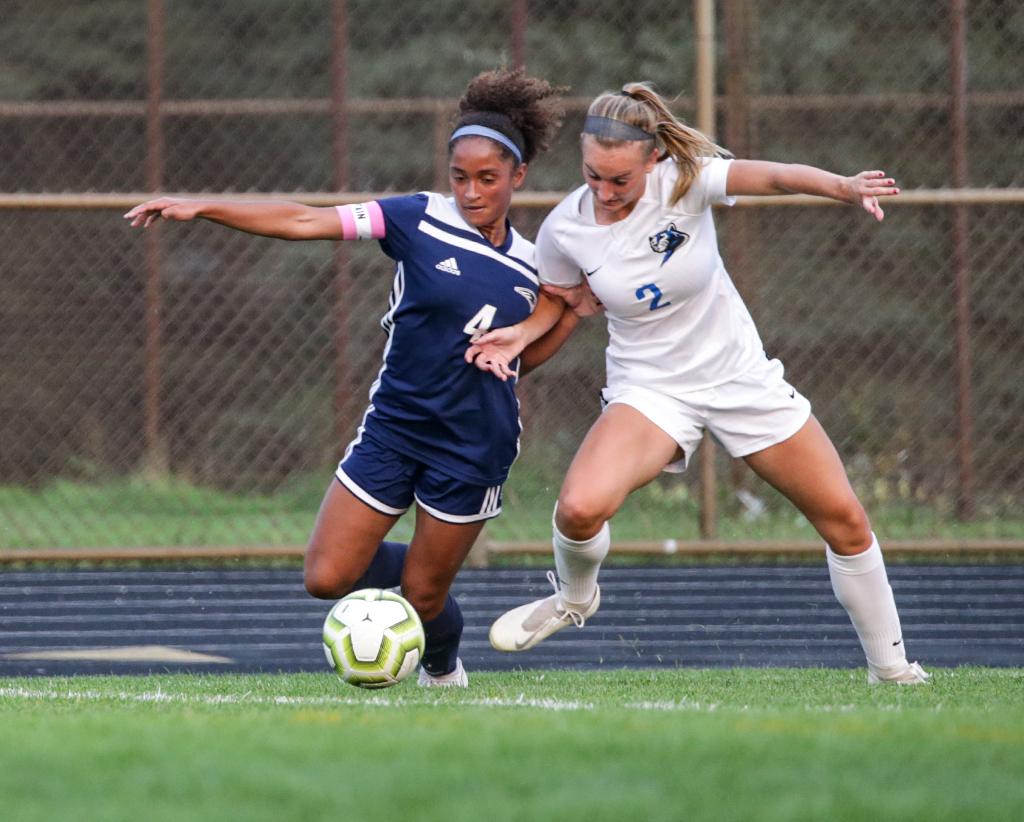 Senior captain Maille Mathis (4) and Mackenzie Matthies (2) race to the ball. Mathis, the Rebels' leading scorer this season, found the back of the net late in the game to give Champlin Park a 3-2 win. Photo by Cheryl A. Myers, SportsEngine

A stat line that includes one goal in a match would be a memorable performance for most players. But for Champlin Park senior forward Maille Mathis, that is below the standard she’s set so far this season.

Mathis came into Tuesday’s match with two goals in each of the Rebels’ first four games. Though she only netted one goal against Rogers, it was a big one as her tally in the 67th minute lifted Champlin Park to a 3-2 victory over Northwest Suburban Conference foe Rogers at Champlin Park High School.

Champlin Park (5-0-0, 5-0-0) and Rogers (3-1-1, 3-1-1) were engaged in a high-speed chase up and down the field prior to Mathis’ game-winning goal. The two teams had each allowed just two total goals this season heading into Tuesday,  but the Rebels and Royals each struck with a pair of goals in the first half, knotting the score at 2 apiece at halftime.

Rogers came out with an aggressive approach that put Champlin Park, ranked No. 4 in the Class 2A coaches’ poll, on its heels at times. 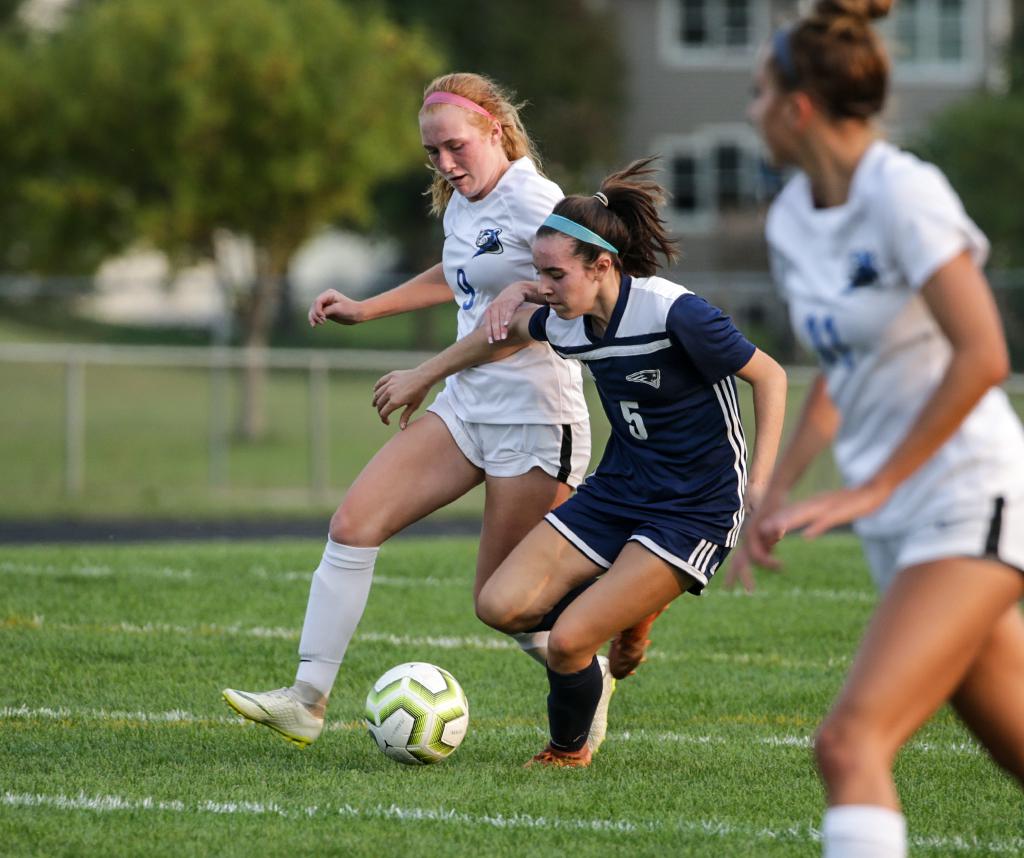 Sophomore Paige Kalal (5) battles for possession with Ella Wade (9) at midfield. Kalal scored her fourth goal of the season late in the first half to tie the game. Photo by Cheryl A. Myers, SportsEngine 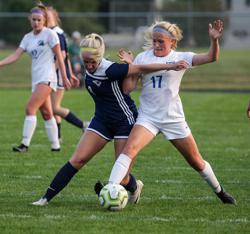 “We really talked about how we wanted to play organized defensively because we think that helps our offense,” said Rogers coach Aaron Lindquist. “We found good outlet passes and got space behind their defense.”

That aggressiveness paid off when the Royals scored in the 12th minute, thanks to junior forward Izzy Smith. Eighth-grade forward Lauren Carroll got the second Rogers goal off of a pass from senior midfielder Izzy Quintavalle.

“They were a really tough test for us last year,” Champlin Park coach Keith Pavelka said of Rogers. “I expected them to come out gunning for us and to really play well. They put us under a lot of pressure.”

The Rebels responded each time Rogers scored. They made it 1-1 via a goal by sophomore attacker Kylie Scott and sophomore midfielder Paige Kalal blasted a shot from far out to make it 2-2 in the final minutes of the first half.

Things started turning in Champlin Park’s favor after halftime. The Rebels found themselves with the ball for most of the second half and put sustained pressure on the Royals. After countless chances, Mathis finally got her shot and beat Rogers senior keeper Edie Frantzen to give Champlin Park the lead.

“We kind of had a refocus at halftime on how hard we have to work,” Pavelka said. “I thought we really outworked them that second half. We have a lot of skilled players who can keep the ball. The longer we kept the ball, the more tired they got.”

Mathis, a known commodity who was second team all-state a year ago while helping the Rebels to a runner-up finish in the Class 2A tournament, still manages to surprise defenders, according to Pavelka.

“She’s been really consistent,” he said. “She’s just really tough to deal with. Defenders don’t think she’s as fast as she is, and that they’re going to get the ball, but she gets around them and has some great midfielders feeding her the ball.”

While defenders might underestimate Mathis, her team and coach certainly do not.

Champlin Park senior forward Maille Mathis’ fast start to the season continued Tuesday as she recorded her ninth goal of the year. Her tally in the 67th minute broke a 2-2 deadlock to give the Rebels a 3-2 win at home over Northwest Suburban Conference rival Rogers.

Champlin Park (5-0-0, 5-0-0) trailed twice during the first half but responded each time with an equalizer. Rebels attacker Kylie Scott and midfielder Paige Kalal, both sophomores, each scored in the opening half.

Rogers (3-1-1, 3-1-1) opened the scoring while testing a Rebels team which had allowed just two goals all season. Junior forward Izzy Smith tallied the game’s first score on a header. Then, eighth-grade defender Lauren Carroll made it 2-1 Royals in the 40th minute.

The Royals found themselves on defense much of the second half against the Rebels, who are ranked No. 4 in the Class 2A coaches’ poll.The Rogers registered just one shot on net in the second half after testing Champlin Park senior keeper Sarah Martin with three shots in the opening half.

Senior goalkeeper Edie Frantzen of Rogers faced a consistent attack from the Rebels and finished with nine saves. 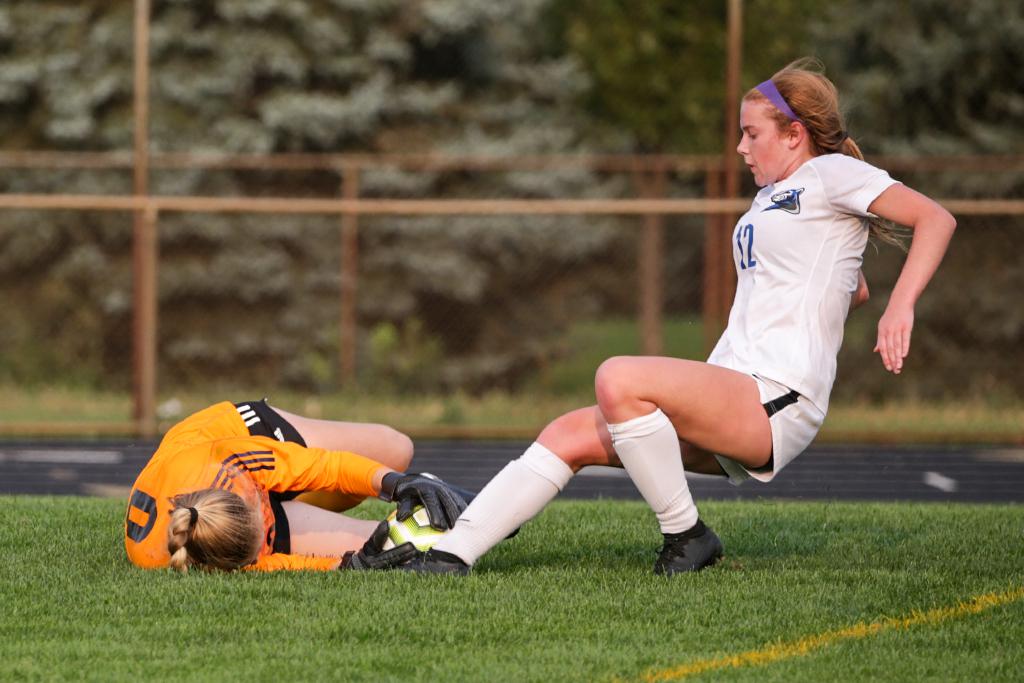 Rogers forward Izzy Smith challenges the goalkeeper for the ball. Smith scored first for the Royals in a 3-2 loss on Tuesday night. Photo by Cheryl A. Myers, SportsEngine