Skylyn Jorgenson opened the scoring for the Huskies in the second half and the Eagles' Kaitlyn Brandt responded with the equalizer to set up a draw. 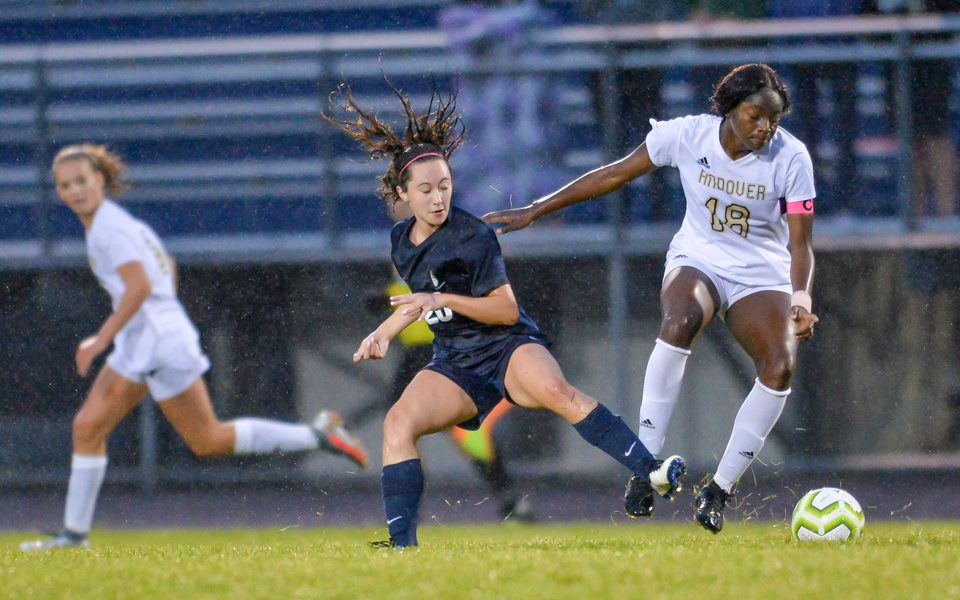 Andover’s Brisha Musungu (18) and Totino-Grace’s Emilie Ling (20) battle for the ball on a rain-soaked field Friday night at Totino-Grace. The Eagles and Huskies played to a 1-1 tie. Photo by Earl J. Ebensteiner, SportsEngine 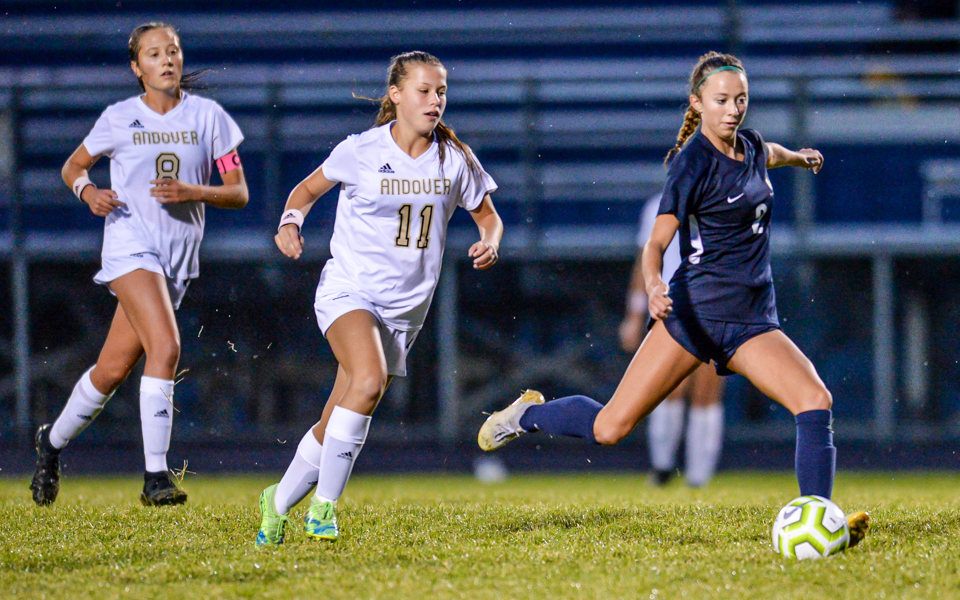 The Eagles' Kiera Laney (right) takes a shot on goal in the first half Friday night in a 1-1 tie against the Huskies. Photo by Earl J. Ebensteiner, SportsEngine

Totino-Grace and Andover took Jim Totino Field Friday, not only competing against each other but they also fought off rough conditions as temperatures dropped into the mid-50s and rain flooded in as play commenced. For their efforts, the Eagles and Huskies had to settle for a 1-1 tie.

It was competitive early on as Andover, ranked No. 10 in the Class 2A coaches’ poll, had the upper hand offensively, recording twice as many shots on goal as its rival. Totino-Grace, meanwhile, held its own, with senior goalkeeper Emma Lamen tallying seven saves in the first half.

Action between the Northwest Suburban Conference foes heated to a boil in the second half, however, as midfielder Skylyn Jorgenson capitalized on an Eagles (2-0-2, 2-0-2) turnover which she converted into her first prep career goal for Andover (0-2-2, 0-2-2). The freshman’s tally came in the 51st minute and looked like it might be enough to win the game. 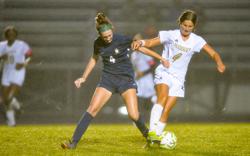 Totino-Grace coach Matt Thibodeau said the intensity he saw from his No. 6-1A Eagles really picked up in the second half and that he was impressed with how his team responded being down 1-0.

"Sometimes we get a little sucked back, so the halftime talk was to get forward. We made adjustments — overall it was good," Thibodeau said.

Eight minutes after the Huskies’ goal, sophomore midfielder Kayla Terhaar found her teammate Kaitlyn Brandt near the right post — wide open. The pass was perfect, leading to a goal for Brandt, who said she knew that pass was coming her way.

"I just knew she was going to play me the ball," Brandt said. "She's so great at sending a nice hard ball on the ground to me in the middle. So I knew to be there, because I knew she would give it to me — it was a nice easy tap in."

It was Brandt's fourth goal of the season, following her strike in a 4-0 season-opening defeat of Elk River, followed by a two-goal performance on Sept. 2 in a 3-1 triumph over Robbinsdale Armstrong.

For Brandt, Friday’s game was about her team’s effort, how the Eagles responded to being down a goal and how they handled the challenging weather conditions.

"I'm really proud of how we played in the rain," she said. "It's really difficult. You have to play fast still and it's a lot more difficult to control the ball. I'm really happy with how we kept fighting and came back — it was a great team goal."

Unlike Andover's roster, which is packed with seniors, the Eagles find themselves loaded with eight juniors. Brandt, one of the juniors, sees that as an opportunity to grow and improve upon the club’s 9-6-2 overall record from last season.

"My class is really strong this year," she said. "I'm super excited for this year. This is just the start, and we're already doing great and I'm already looking forward to next year.”

Thibodeau thinks his team has benefited this season from the reduced number of games due to the COVID-19 pandemic.

“It’s nice. We only play 11 games so we only play twice a week. We get that recovery time,” he said, adding the season still has plenty of matches left. “We’ll see how it goes, we’ll just battle every game.” 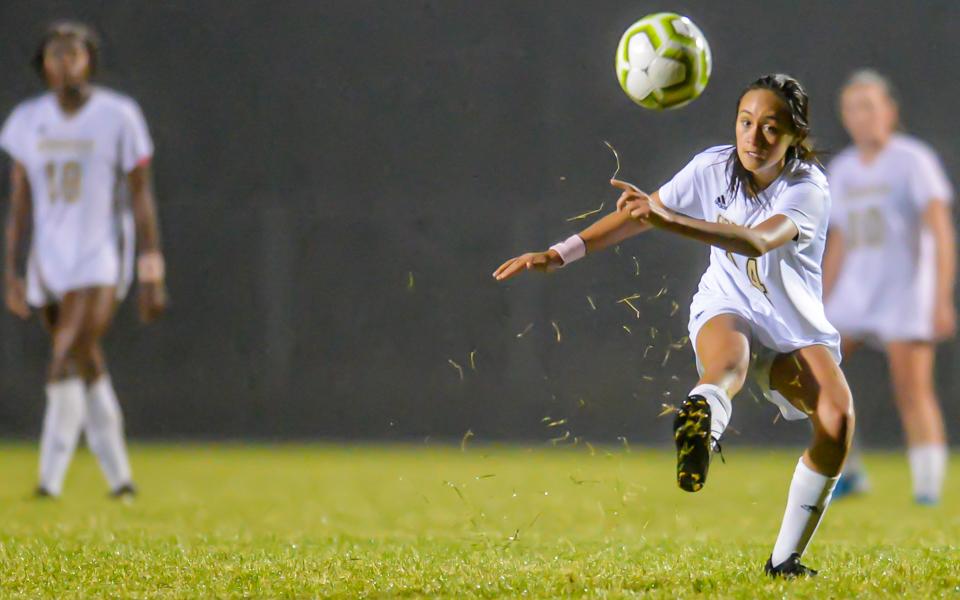 Andover’s Bri Stocke kicks the ball deep into the Eagles' end late in the second half trying to break a 1-1 tie Friday night at Totino-Grace. Photo by Earl J. Ebensteiner, SportsEngine

Andover grabbed a 1-0 lead after a scoreless first half but Northwest Suburban Conference foe Totino-Grace countered to notch a 1-1 tie on a rain-soaked field Friday at Totino-Grace High School.

It was a quiet, wet start at Jim Totino Stadium. Both teams had scoring chances in the first half but Andover, ranked No. 10 in the Class 2A coaches’ poll, mustered the advantage in shots on goal. A ball from Skylyn Jorgenson found the back of the net 51 minutes into the match when the freshman capitalized on a turnover to generate a 1-0 Huskies’ advantage.

It looked like Andover (0-2-2, 0-2-2) might hold on from there, but just eight minutes later Totino-Grace’s Kaitlyn Brandt, with the help of teammate Kayla Terhaar, notched the game-tying goal with a sleek 1-2 punch into the back of the net.

With the new COVID-19 rules for the 2020 season, there was no overtime after the game ended tied in regulation.