The Wildcats evened the game at 1 in the final minute of a hotly contested match. 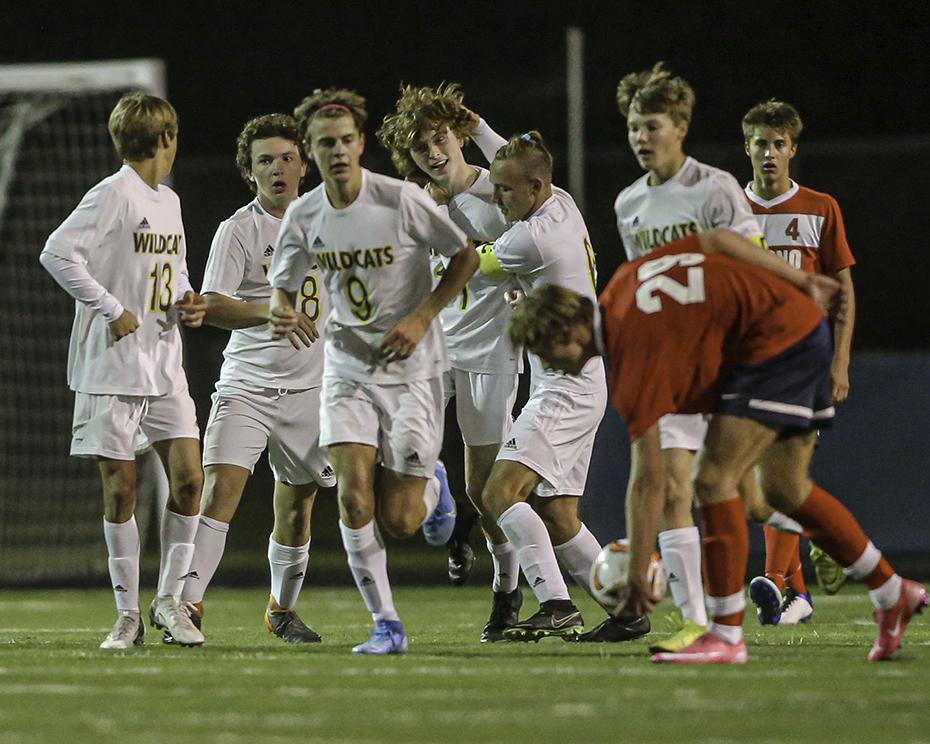 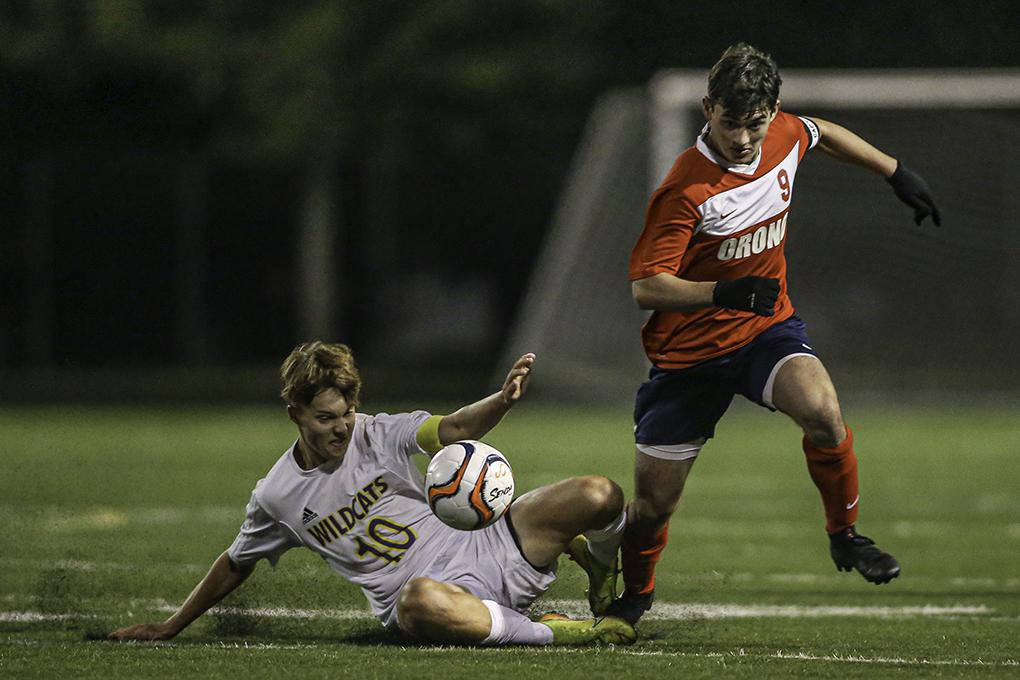 Orono's Jamie Bazil (9) sprints away from Waconia defender Christopher Nichols after winning a battle for the ball in the second half. Photo by Mark Hvidsten, SportsEngine

A cool breeze was in the air at Orono High School Thursday evening with temperatures dropping into the 40s while masked up fans who were socially distant watched on. When it came to the match on the field, however, a different story was unfolding: One that wasn’t so chilly.

Waconia and Orono battled for 80 minutes with tough physical play and lots of talk. It all ended with a last-minute goal from Waconia senior Michael Bortz which resulted in a 1-1 tie that had the Wright County Conference rivals leaving the field with different attitudes.

There was extra motivation for Waconia (2-0-1, 2-0-1) during the match given Orono’s recent success, which includes a berth in last year’s Class 1A state tournament, and the most recent meeting between the rivals in 2019 that resulted in the Spartans visiting Waconia and handing the Wildcats their only loss of the regular season.

“We leave it on the field,” said Waconia coach Ty Seim. “Orono is the standard — we respect them.” 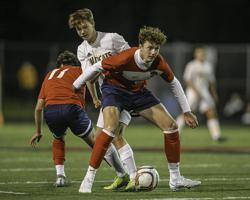 Thursday’s match is just part of a recent trend in which the two squads annually finish at, or near the top, of the Wright County Conference standings. It’s a run that looks to continue when the schools relocate to the West Metro Conference next year.

The intensity Thursday started from the get-go from both sides, but Orono, ranked No. 6 in the Class 1A coaches’ poll, seemed to have the upper hand in the game’s opening minutes as the Spartans peppered Waconia with shots.

But oddly enough, Orono (1-1-2, 1-0-2) scored first without even having to kick the ball into the net. The Wildcats’ keeper, senior Lucas Razidlo, ran into a defender trying to stop the ball but they both missed and watched the ball roll into the net, giving the Spartans a 1-0 lead in the eighth minute.

After that hiccup, Razidlo held things down for No. 8-1A Waconia. He faced eight shots in the first half and finished with 12 saves. This is the first year he’s been relied upon as a varsity starter after sitting behind now-graduated Nate White, an all-state keeper.

“[Razidlo] is awesome,” Seim said. “He makes plays. He made some saves I thought were going in the back of the net. He’s an X factor.”

Things began to even out between the rivals as the game progressed. The even play also meant equal chances for pushes and shoves, along with a lot of choice words being exchanged.

The physicality eventually came to a head when a Waconia player was blindsided by Orono senior Fin Rohrer. The collision left the Wildcat on the ground, and players, fans and coaches from both sides were upset and expressing their displeasure. The moment resulted in Rohrer departing from the game with a red card.

With Waconia fired up after that play, the Wildcats made an extra push in the game’s few remaining moments. The team tallied a goal in the 80th minute as Bortz drilled a shot into the net to tie the game at 1.

“We just tell our kids to fight to the end,” Seim said. “We defended everything they threw at us. And we scored for them so we had to score for us, too.”

The final seconds drew the game to a close, with both teams leaving the field with different attitudes. Seim said after the game his team considered the match a win and posed for a photo on the Orono logo to celebrate.

“They celebrated in our place last year — so we’re going to do it to them,” Seim said. “That’s how it goes.”

The Spartans, meanwhile, had a more dulcet tone as they quietly met after surrendering the late goal. Orono, which has now gone three consecutive matches without a win, endured the yelling from the Waconia side while hoping for a postseason rematch. A scenario that may not come to fruition this year due to the COVID-19 pandemic, making these regular-season matches all that more important.

“I think every match during this season is important,” said Orono coach Derek Engler. “We hope there’s a postseason and we hope we get to play them again.”

Waconia gave Orono its first and only score via an own goal in the first half of Thursday’s match. The Wildcats (2-0-1, 2-0-1) finally got a goal of their own as Michael Bortz tied the match at 1 in the game’s final minute as the Wright County Conference rivals played to a 1-1 draw at Orono High School.

The Spartans (1-1-2, 1-0-2) didn’t have to work hard to earn their one tally. Waconia senior goalkeeper Lucas Razidlo ran into one of his teammates as they both tried to stop the ball. They failed, however, with the ball rolling past them and into the net.

Besides that gaffe, Razidlo successfully slowed a ferocious attack from Orono, ranked No. 6 in the Class 1A coaches’ poll, to finish with 12 saves.

Orono senior keeper Hadley Stephenson had to stop all of two shots from the No. 8-1A Wildcats in the first half. Things slowly got more difficult for Stephenson, however, and he stopped two more shots before surrendering Bortz’s equalizer.

When the final buzzer sounded, there was plenty of animosity on both sides after 80 minutes of highly physical play that included plenty of heated exchanges and one red card that sent Orono’s Fin Rohrer off late in the second half. 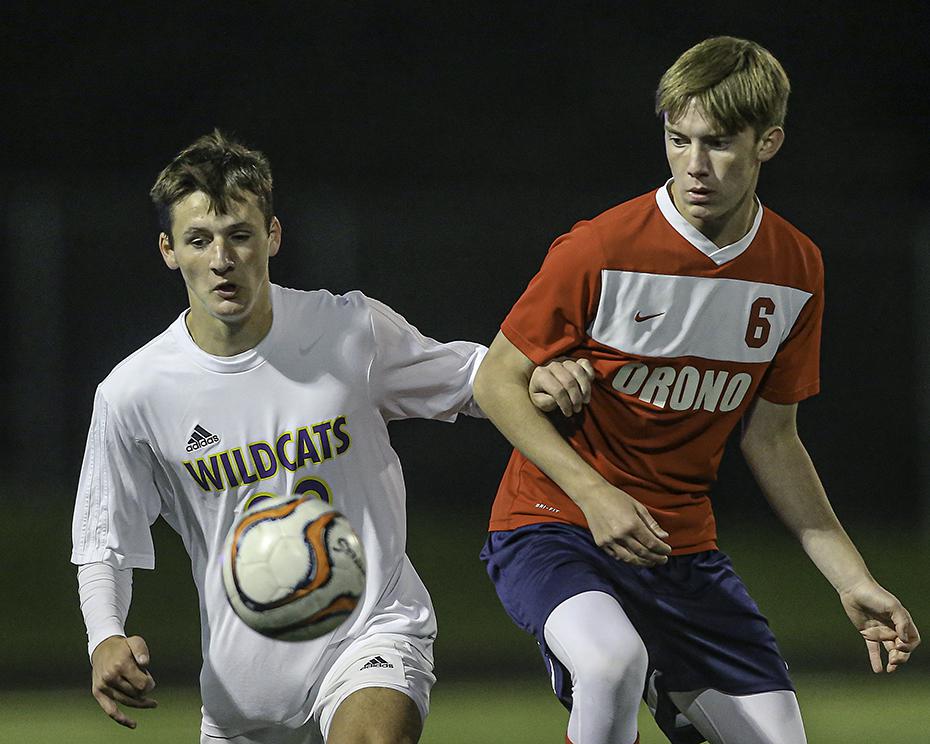 Waconia's Wallace Wisniewski and Orono's Aiden Ecker (6) keep their eyes on the ball in the second half. Photo by Mark Hvidsten, SportsEngine