The Zephyrs' Lauren Heinsch scored with just over three minutes left for a 3-2 victory over Orono. 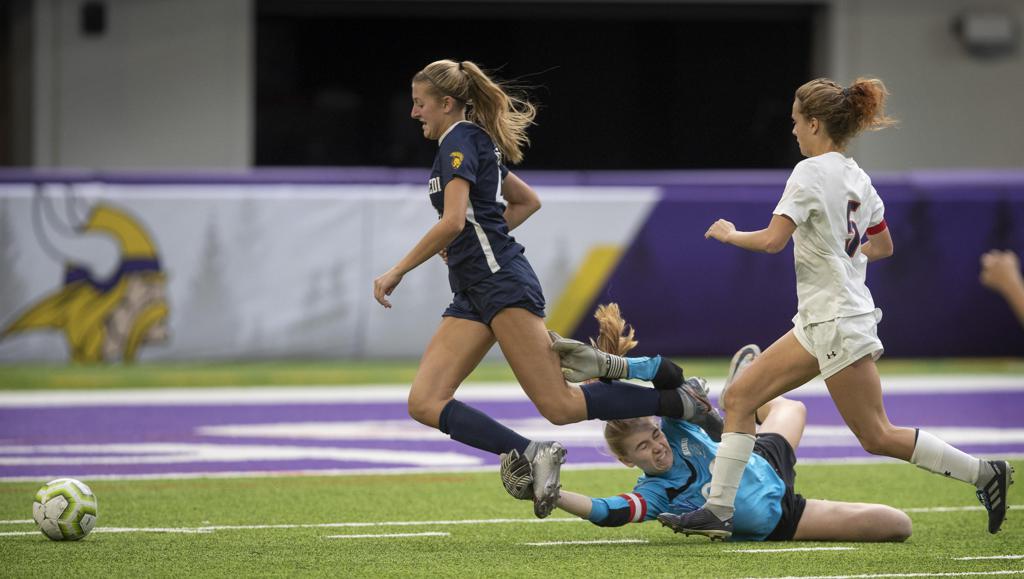 Orono's goalkeeper Clare Gagne drew a red card on this play involving Mahtomedi's Anna Wagner (left), who was attempting to take a shot to give her team the lead in the second half. Photo: Jerry Holt • Jerry.holt@startribune.com

So as his team trailed by a goal with about 20 minutes left in the Class 1A state tournament championship game Thursday, Wald began preparing a somber postgame address. Winning a third consecutive title seemed unlikely, especially against an Orono team desperate to avenge championship game losses to the Zephyrs the past two seasons.

Then senior forward Anna Wagner, who scored the game’s first goal, matched the Spartans’ urgency. She made tough runs toward Gagne and their resulting collisions changed the game.

Wagner drew two second-half penalty shots and her teammates scored both times, clinching a 3-2 victory at U.S. Bank Stadium. Mahtomedi’s three-peat of state titles matched those won by the Zephyrs’ squads from 2004-06.

“This is us making our mark right here,” senior midfielder Audrey Sexson said.

“It definitely looked like Clare had the ball first and then the girl tripped,” Spartans coach Erin Murray said.

No one disputed the second foul called on Gagne, who was forced to disrupt Wagner, again inside the 18-yard box. But when the last defender back, in this case Gagne, fouls to deny a goal-scoring opportunity, officials issue a red card and ejection.

“We should have never put Clare in a situation where she’s one-on-one with an offensive player and she has to make that decision, ‘Do I go for the ball or step back?’ ” Murray said. “We know Clare. She’s not going to try to hurt anybody but she’s going to go for the ball. I think she did the right thing.”

“Me and Audrey both said a prayer for each other,” Heinsch said. “You just have to tell yourself, ‘It’s going in.’ You can’t go up to the line doubting yourself.”

Two second-half penalty kicks propelled Mahtomedi to its third consecutive Class 1A girls' soccer title in a 3-2 victory over Orono on Thursday at U.S. Bank Stadium.

The second of those goals, by senior Lauren Heinsch, came with 3:11 left in the game.

In the first half, Mahtomedi went ahead 1-0 on a converted corner kick opportunity. Erika Broten got her head on the ball sent in, pushing it toward Anna Wagner, who turned and used her right foot to blast the ball high under the crossbar.

Orono leveled the score a few minutes later. Sadie Koltes delivered a 25-yard pass to the feet of Anna Tesar. Despite a closing Zephyrs’ defender, Tesar chipped the ball in the net and tied the score 1-1.

Orono (15-4-3) went ahead 2-1 about 10 minutes into the second half. Megan Marzolf uncorked a 35-yard rocket from the middle of the field to give her team a lift.

The game wouldn’t stay tied at 2-2 for long. Wagner drew another penalty kick after contact with Gagne. And this time, the referee issued Gagne a red card because she was the last defender back and made a play inside the 18-yard box that denied a goal-scoring opportunity 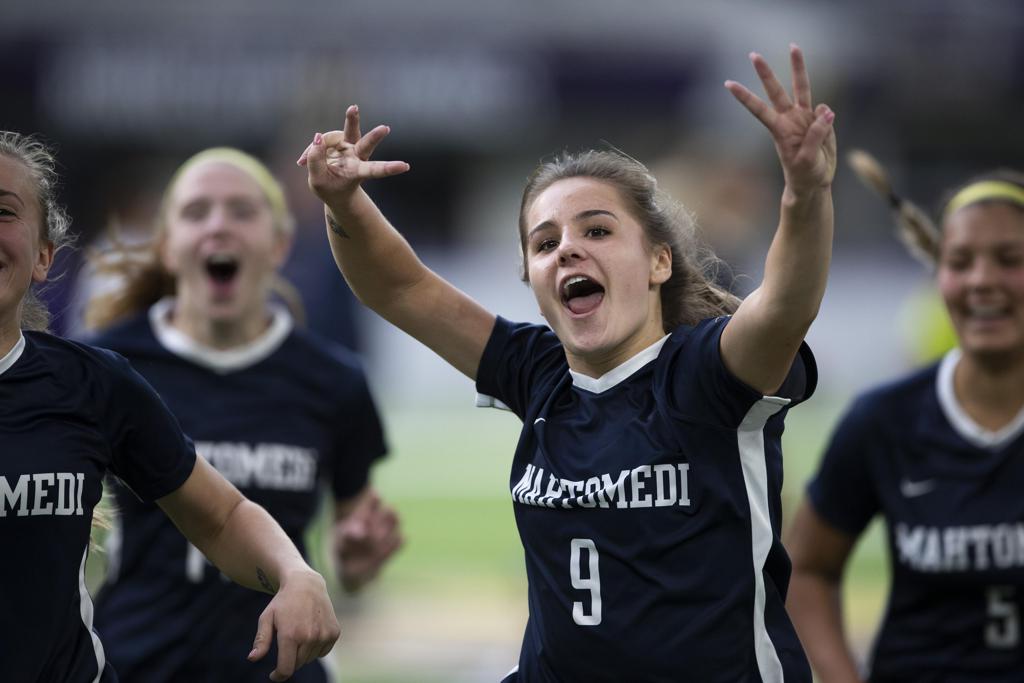 Mahtomedi's Lauren Heinsch, who scored the game-winning goal on a penalty kick, celebrates the Zephyrs' third consecutive state title with teammates after their 3-2 victory over Orono. Photo: Jerry Holt ¥ Jerry.holt@startribune.com