The Crimson got goals from Kelley Kloncz and Emma Fournier that held up for a 2-1 win in the Class 2A title game. 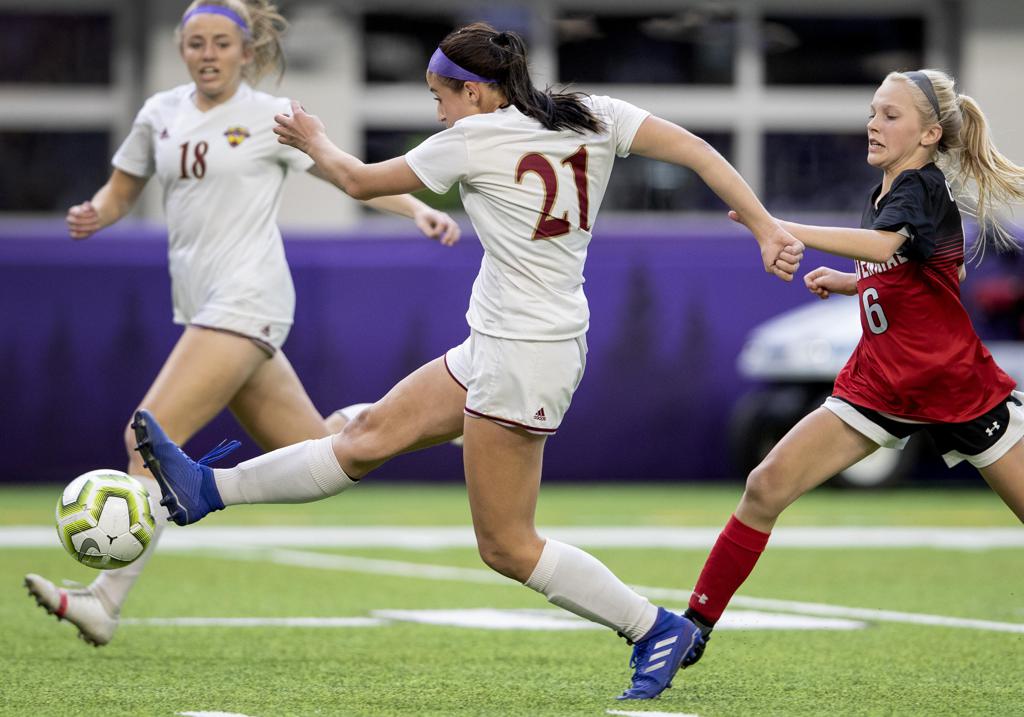 Kelley Kloncz (21) of Maple Grove scored the first goal of the game in the first half. Photo: CARLOS GONZALEZ • cgonzalez@startribune.com

A hold-up player who controls the ball and sometimes the game with her feet, Maple Grove junior midfielder Emma Fournier proved Thursday in the Class 2A championship game 2-1 victory over Centennial that good things can happen even when she doesn’t.

Fournier assisted on the only goal of the first half after she lost both sight and control of the ball. But teammate Kelly Kloncz didn’t. Fournier then scored the eventual winner a minute after halftime when she did what she does by possessing the ball, spinning and launching a 25-yard strike with her off foot.

She did so and helped Maple Grove win its first state soccer title in its third consecutive visit to U.S. Bank Stadium.

From there, her Crimson held on against a Northwestern Suburban Conference rival that maybe needed another five minutes after Centennial star Khyah Harper scored a 67th minute goal.

“That’s usually how I like to play, get the ball and try to control it technically,” Fournier said. “I like to take people down the side and cross it, but I also love being able to cut it in, get a great ball from a teammate and get a shot.”

But do many of those shots come on deft, long strikes with the right-footed Fournier’s left foot?

“Enough that she doesn’t get yelled at,” Crimson coach Ben LeVahn said. “It’s usually a quality shot worth taking.”

Fournier created the game’s first goal in the 17th minute after she tried to flick the ball to Kloncz, but lofted it too high and lost sight of it.

“It was intended to be,” Fournier said, “but it just went a little higher than I meant.”

Kloncz saw it and scored low and left into the goal.

“I’m not even sure what happened in the moment,” Kloncz said. “I just remember people yelling at me to run, so I just ran and things ended up OK.”

“Three teams in the final four were from our conference,” Cougars coach Ginger Flohaug said. “I’m proud a team from the Northwest won it. I wanted it to be us. I’m still glad the Northwest showed how strong we can be.”

One of those three Northwest conference teams sported winner’s medals around their necks afterward.

“It doesn’t feel real because you just don’t expect it,” she said. “When you look back and see how talented our team is and how hard we work, we deserved to get here. It’s just amazing.”

This time last season, Maple Grove defeated Centennial in a Class 2A, Section 5 sectional final that stung the Cougars from Circle Pines all year long.

On Thursday afternoon, the Crimson did it to them again with a 2-1 victory that won Maple Grove its first Class 2A title at U.S. Bank Stadium.

The two teams played this time a year ago, when Maple Grove won 3-2 in that sectional final that sent it to its second of three consecutive state semifinals.

The Crimson went one step further Thursday, winning it all by scoring the game’s first two goals and then holding off the Cougars in the final minutes.

In September’s first week, Centennial countered with a 2-1 victory early in the regular season.

This time, Maple Grove junior forward Kelley Kloncz scored the only goal in the first half after she took a ball that had bounced off and over teammate Emma Fournier’s head as Fournier tried to control a long forward pass from midfield.

She lost sight of it as it bounced away from her, but Kloncz was right behind her on the right and scored on a low shot aimed inside the left post past Centennial goalkeeper Jenna Lang.

Just after halftime, Fournier made it 2-0 with a ball she saw all the way, from controlling a pass forward from teammate Luca Ralph near the right sideline with her back toward the goal to spinning and launching a deft left-footed shot from 25 yards’ distance.

It rose beyond Lang’s outstretched arms, finding the goal just inside the right post and just under the crossbar before the second half was two minutes old.

Centennial star Khyah Harper scored her 26th goal this season in the 68th minute on a header from the penalty box off teammate Madison Monson’s corner kick.

It was the first goal Maple Grove had allowed in its last five games.