Oscar Smythe scored twice, including the game-winner in the second half, in a 2-1 victory over East Ridge. 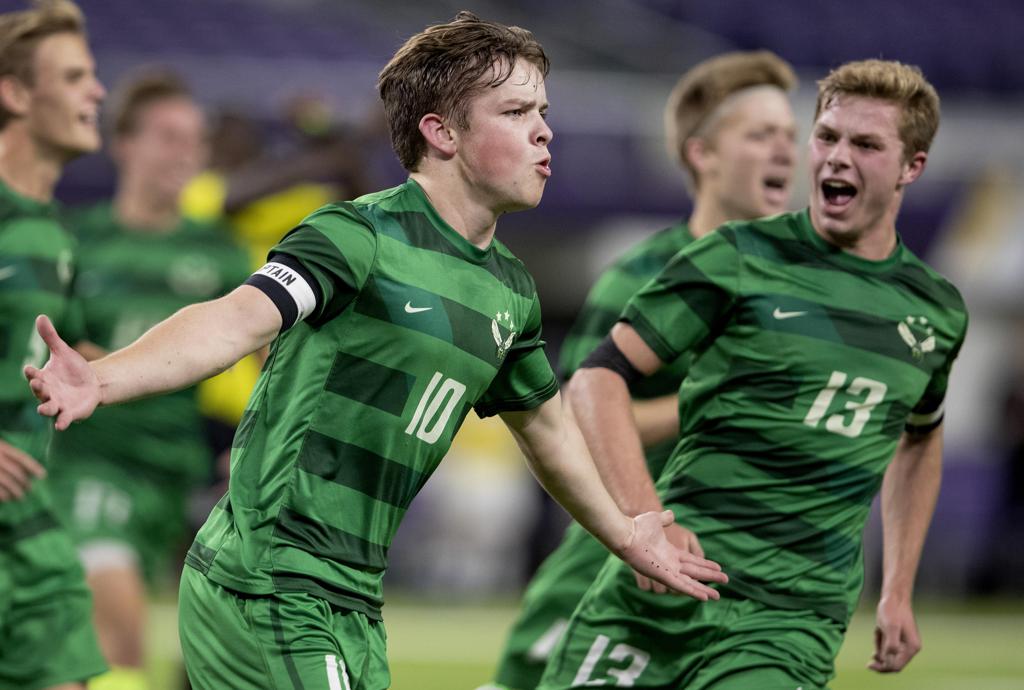 Oscar Smythe (10) of Edina celebrated after scoring what proved to be the winning goal against East Ridge in the second half. Photo: CARLOS GONZALEZ • cgonzalez@startribune.com

He had done the math and knew regular season, section playoffs and state tournament games added up to 22 should a team reach the state championship game.

He just didn’t know his lower leg would mirror Edina’s 22-0 season after it defeated East Ridge 2-1 in the Class 2A title game Thursday at U.S. Bank Stadium.

“We always knew if we get to 22 and play the big game, it was going to be there for us,” said fellow co-head coach Dave Jenson, referring to a state championship. “I just didn’t think we’d ever be undefeated. You never do.”

Garner thought enough on a summer’s day to get the overall number etched in his skin, but who could have foreseen a season in which the Hornets trailed by only a minute once in those 22 games?

Their victory Thursday — powered by senior star forward Oscar Smythe’s two goals, including the winner in the 63rd minute — was Edina’s 184th state title in all sports and its first in boys’ soccer since the Hornets won the third of three consecutive championships in 2001.

They had only trailed once since August in that mere minute. They had shut out six consecutive opponents through Tuesday's semifinal.

“To us, they were just another team,” East Ridge senior defender Reese Dodd said in a tearful post-game press conference with his coach and a teammate. “We’ve broken winning streaks before. Earlier in the season, Woodbury [was] 9-0, beat them. In the semis, we broke St. Paul Central’s 13-game winning streak. To us, Edina was just another team: Come out, put everything on the line, play our game. I think we could come out on top.”

They came close, tying the game for almost 10 minutes in the second half after East Ridge’s Cullen Featherstone made it 1-1.

“A little bit,” Edina junior goalkeeper Hank Stechmann said when asked if his pulse quickened and his palms grew sweaty when the game was tied. “I just knew I had to do what I had to do and that’s all I could do.”

He kept East Ridge scoreless the rest of the way, thanks in part to a crucial save in the game’s final seconds.

Smythe, meanwhile, scored the winner after he took teammate Henry Rose’s forward pass from midfield, took two touches and, from the edge of the 18-yard box, scored low and left with a shot past East Ridge goalkeeper Nick Wagner.

That winning goal kept Edina's season perfect and presumably left Garner without a shred of regret.

“Twenty-two and oh, it’s something I don’t talk about,” Jenson said. “Some people do.”

Edina senior forward Oscar Smythe scored twice and his team finished an undefeated season 22-0 after a 2-1 victory over East Ridge to win the Class 2A championship Thursday at U.S. Bank Stadium.

Smythe gave the Hornets an early 1-0 lead with a goal in the 18th minute when he turned a long free kick from the left side into an opportunistic goal during a scramble in front of the goal.

After East Ridge sophomore forward Adrian Lagravere tied the game in the 53rd minute, Smythe came back with the winner in the 63rd minute.

This time, he scored after a long throw-in pass from the right sideline ended up on his left foot and he scored low and left from near the edge of the 18-yard penalty box.

The title was Edina’s first boys' soccer championship since 2001.