The Hornets scored two goals in the second half to advance to the Class 2A championship. The Millers played a man down after their goalkeeper was shown a red card and ejected from the game. 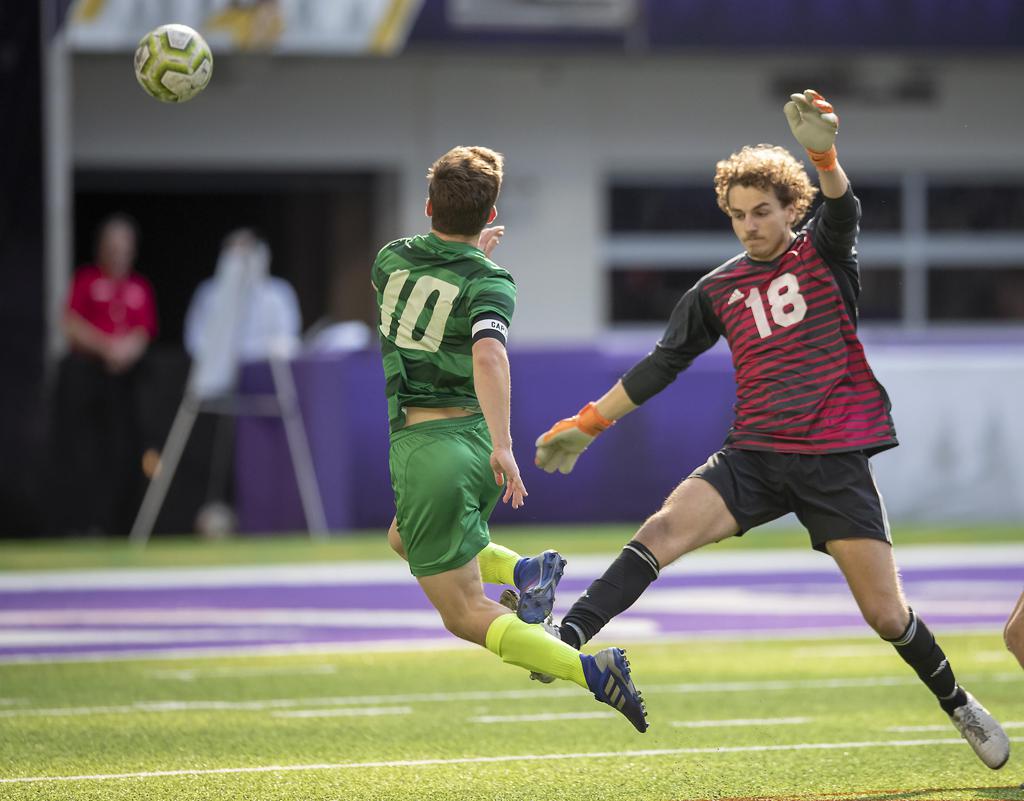 Minneapolis Washburn goalkeeper Ben Schliemann received a red card and was ejected after contact with Edina's Oscar Smythe during the second half. Photo: ELIZABETH FLORES • liz.flores@startribune.com

Edina remained unbeaten with a 2-0 victory in the Class 2A boys’ soccer semifinal against Minneapolis Washburn. But a game-changing penalty left the Millers’ faithful fuming.

Less than five minutes into the second half of a 0-0 game, officials showed starting Washburn goalkeeper Ben Schliemann a red card and ejected him for a foul on the Hornets’ Oscar Smythe that “denied a goal-scoring opportunity,” said Steve Clark, coordinator of officials for the Minnesota State High School League.

“I chased after the ball and got a quick touch on it and the goalie clipped me,” Smythe said. “That definitely altered the game in a good way for us.”

No. 4 seed Washburn (16-4-1) put backup Ryan Everhart in net but remained one field player short for the duration. It was the first time the Millers played a man down all season.

“It’s a challenge because they are so good defensively,” Millers coach Aaron Percy said. “One of our keys is trying to possess the ball and when we lose a player off the field, it puts us in a situation that we have to change our game to something that totally doesn’t fit what we like to do.”

No. 1 seed Edina (21-0) got second half goals from Sammy Presthus and Smythe. The game marked the sixth consecutive outing in which Edina has not conceded a goal.

Edina previously defeated the Millers by a 3-2 score in the regular season opener for both teams.

“Things happen in the course of a game all the time,” Percy said. “We still didn’t score when we were even up. Edina played well. Maybe it could have been a 0-0 game going into overtime. Who knows?”

The Edina boys’ soccer team remained unbeaten with a 2-0 Class 2A semifinal victory against Minneapolis Washburn, a victory that left Millers’ fans fuming.

Early in the second half, Washburn starting goalkeeper Ben Schliemann was shown a red card and ejected for a foul just outside the 18-yard box. Washburn put backup Ryan Everhart in net but remained one field player short for the duration.

Schliemann was shown a red card for a foul that “denied a goal-scoring opportunity,” said Steve Clark, coordinator of officials for the Minnesota State High School League.

The Hornets advance to championship game at 5:30 p.m. on Thursday to face either St. Paul Central and No. 3 seed East Ridge of Woodbury.

Edina previously defeated No. 4 seed Washburn (16-4-1) by a 3-2 score in the regular season opener for both teams.

Tuesday’s game marked six consecutive outings in which Edina has not conceded a goal.