Keegan James' first-half goal against Orono was less spectacular than his midfield free kick but helped trigger a 4-1 victory and a chance to repeat as 1A champions. 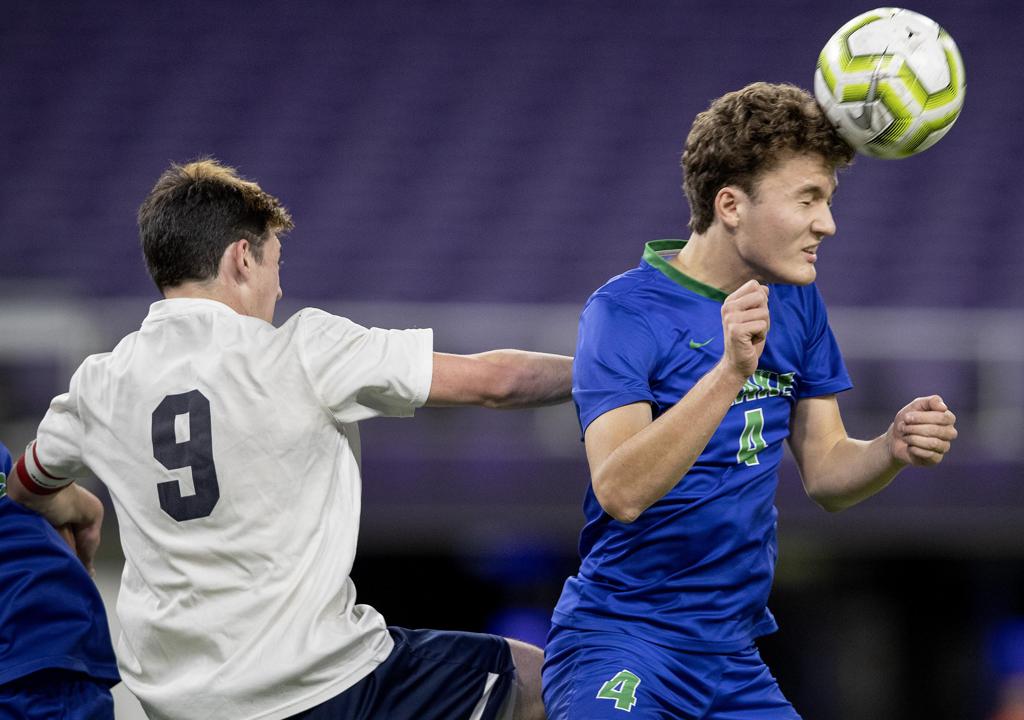 Jamie Bazil (9) of Orono and Daniel Lesov (4) of Blake fought for the ball in the first half. Photo: CARLOS GONZALEZ • cgonzalez@startribune.com

Blake midfielder Keegan James’ stunning 55-yard free kick this time last year both went viral worldwide and defeated Bemidji for the Class 1A state championship at the start of a second overtime session.

On Monday, his overhead/scissor kick volley in the seventh minute started the defending champions to a 4-1 victory over Orono and back to the title game Thursday at U.S. Bank Stadium against Holy Angels.

“I don’t think anything compares to last year,” Blake coach Tamba Johnson said. “But big moment, he shows up. And he did it again.”

James’ goal created a 1-0 lead that last through halftime. Teammate Will Mortenson scored twice within 49 seconds early in the second half for a 3-0 lead from which Orono never recovered.

Orono defeated Blake 4-3 in a September game when James scored a goal that Spartans coach Derek Engler called “probably better than the one he had tonight.”

In that game, James brought a ball down from his head to his feet for a one-timer goal that Mortenson called “ridiculous.” On Monday, he took another ball played high to him out of the air and scored.

“For some reason, I just have a knack of scoring nice goals against Orono,” James said.

Or against Bemidji, which lost 1-0 when James’ soarings free kick from midfield scored from so far away. It received millions of views on social media within hours, made ESPN’s SportsCenter’s Top 10 and was picked up as faraway as Australia.

“It really went around the world,” James said.

Can he promise a repeat Thursday?

This time last year, Blake School sophomore midfielder Keegan James won the Class 1A soccer championship with a stunning 55-yard goal on a midfield free kick that started the second half overtime session and defeated Bemidji 1-0.

On Monday, James provided another highlight-reel goal – albeit not as meaningful or spectacular – with an overhead kick in the seventh minute of his team’s 4-1 state semifinal victory over Orono at U.S. Bank Stadium.

Senior forward Will Mortenson scored twice in two minutes early in the second half for a 3-0 Blake lead before Orono forward Reece Clifford got one goal back in the 56th minute.

Mortenson scored in the 44th minute when he took a ball played forward by teammate Jackson Lange and powered a shot that deflected off an Orono defender and past goalkeeper Michael Hughes.

He scored in the 46th minute on a weaving run with the ball between defenders down the left side before he scored with a left-footed shot that made it 3-0.

Orono’s Reece Clifford scored in the 56th minute to get one back, but Blake scored in the final six minutes to regain a three-goal lead and advance to the Class 1A championship on Thursday against Holy Angels, which defeated St. Cloud Tech earlier Monday.