With 23 seconds left, Moe, the junior midfielder found the net and sent the Bears to the state tournament. 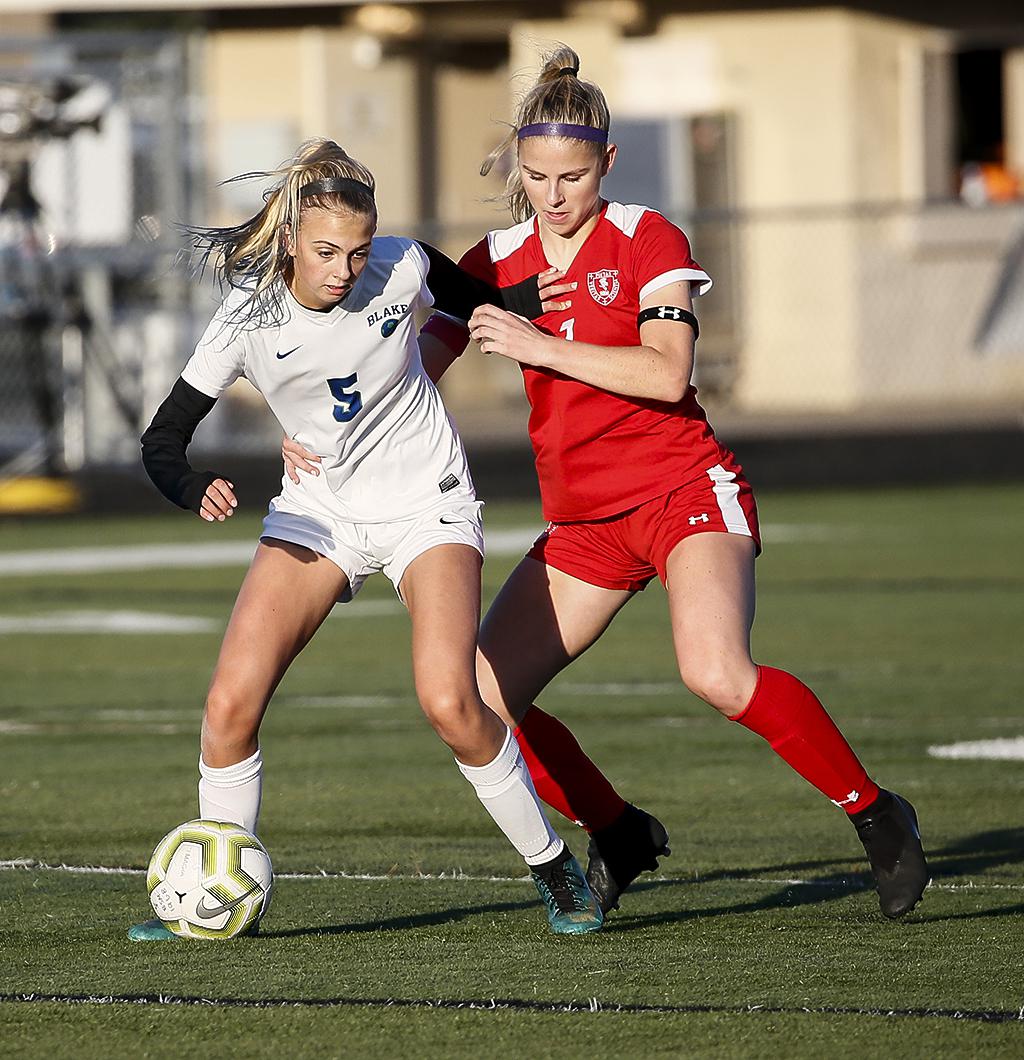 Blake's Catherine Moe (5) blocks out a Benilde-St. Margaret's defender. Moe scored with 23 seconds left in regulation to give the Bears a 2-1 win over the Red Knights in the Class 1A, Section 5 title game. Photo by Cheryl A. Myers, SportsEngine

Cate Moe was unhappy with a couple of free kicks she had taken in Blake's Class 1A, Section 5 title match against Benilde-St. Margaret's Thursday.

So when she lined up another free kick just outside the Red Knights' box with the final seconds of regulation winding down, she put those previous kicks behind her.

"You have to put your mistakes in the past," Moe said. "What matters is what's happening in the moment. You have to focus on what you're doing. I had just taken two free kicks that I shanked, so I thought I would go top right — and the goalie was a little out of position for that shot."

And Moe was money, finding the back of the net with just 23 seconds left to lift the Bears to a 2-1 victory in a match played at Osseo. 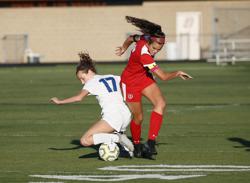 "Cate has been our go-to for free kicks and goal kicks this season, and that one was beautiful," Blake coach Kelsey Hans said. "It was a perfect ending."

Indeed it was a fairytale ending to a storybook run through the section tournament for the Bears, who, as the No. 4 seed, knocked off fifth-seeded DeLaSalle 2-1 in the quarterfinals, then upset top-seeded Breck 2-0 on the Mustangs’ home pitch Tuesday in the semifinals.

Blake took a 1-0 lead Thursday after Carly Shoemate scored at 6:58 of the first half, but Benilde-St. Margaret's netted the tiebreaker less than two minutes later when Sydney Drees scored off a free kick in the 32nd minute.

In the second half, the Bears took advantage of the wind to create a number of scoring chances and hold the ball in the Red Knights' end of the pitch.

"We had the wind in the second half, and I think that created a lot of momentum," Hans said. "When you're in someone's half and creating chances, even though you're not scoring, I feel the momentum is still there. You can feel it come."

But Blake needed Moe's late goal to avoid overtime, improve to 13-7-0 on the season, and advance to its first state tournament in two seasons.

"I've been there once before, and it was such an amazing feeling to be there," said Moe, who was a freshman on that 2017 state team. "To get back there with this group of girls, which is such an amazing group, is super-cool."

Hans agreed, adding, "We talked at the beginning of the year, and our goal was to advance to state. We've been improving all year, and I feel we're playing our best soccer right now."

Benilde-St. Margaret’s finished the season 11-3-4 despite a roster dotted with underclassmen, including goalkeeper Olivia Olson, an eighth grader, who finished Thursday’s game with eight saves, many coming on spectacular second-half stops.

"This group has a big future in front of it," coach Scott Helling-Christy said. "Our juniors and seniors have been really good, helping these younger players through the season."