After being tied 1-1 at halftime, Andover girls blow out Cretin-Derham Hall

The Huskies played stout defense and registered three goals over an eight-minute span in the second half to secure the win. 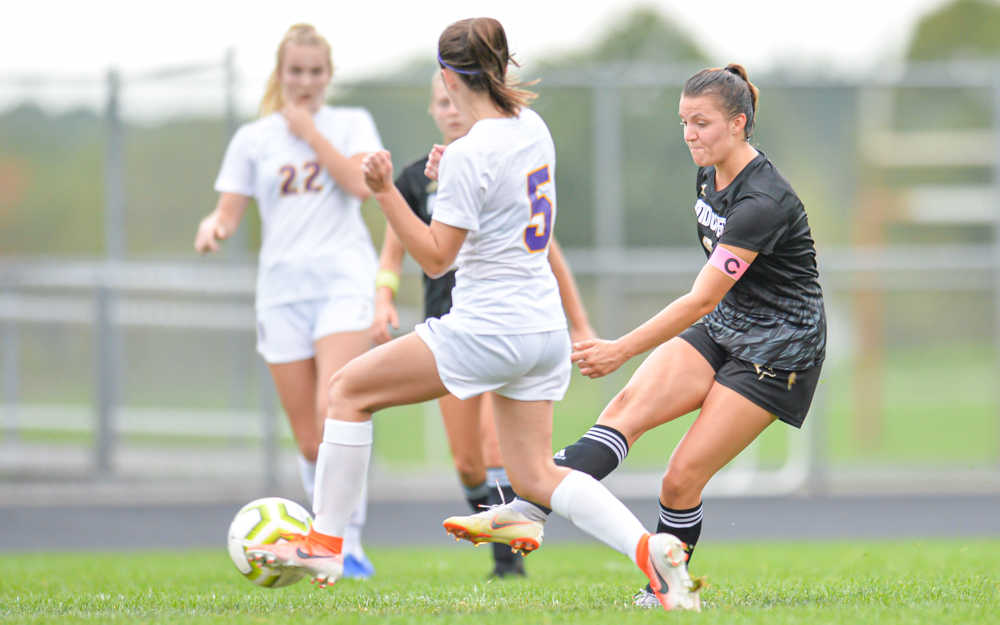 It took Cretin-Derham Hall standout Paige Peltier less than three minutes to score a goal against Andover on Saturday afternoon.

That was a bad sign for the Huskies, right? Nope, said Andover coach Tracey Griess.

"We knew Peltier was dangerous, but we had three people right there," Greiss said. "There was no need to panic, because we still had 75 minutes. Our thought was, 'OK, they scored one. Don't let them score two.'"

And that's exactly what the Huskies did, limiting the Raiders to the one goal en route to claiming a 4-1 home victory. 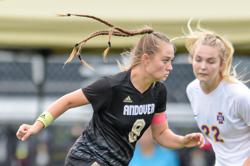 "I reminded the defense to not let [Peltier] turn, to force her to keep facing her defense," Gillespie said. "We also tried to lay back and keep her in check instead of pressing her."

Cretin-Derham Hall coach Rosie Malone-Povolny said this was not the first time Peltier, who has committed to play collegiately at Notre Dame, has faced a defense geared to stop her.

"Often Paige is double- and triple-teamed," Malone-Povolny said. "When she's moving, it's harder for teams to do that. I don't think we had the movement we needed."

It helped that the Huskies, ranked No. 4 in the Class 2A state coaches' poll, tied the game less than a minute after Peltier's goal when Anna Breffle's cross set up Kennedy Sanders for a dangerous shot from distance that found the back of the net.

"That was huge for us to get that goal right away, because it put the game back at even," Griess said. "Offensively, we have a lot of different players who can score. For example, Kennedy is a holding midfielder, so that's her first goal this year. It shows that if we stay composed we have a lot of scoring options."

The game remained tied until midway through the second half, thanks in part to Raiders goalkeeper Olivia Kalla who had 19 saves.

"Kalla moves well, she gets to the right spaces, and she has good reach and good hands," Griess said. "She kept them in the game for a long time. We talked at halftime about not just launching shots, because she's going to save them. We had to take a moment to compose ourselves, then take shots that were lower and more dangerous."

Andover broke the tie with 23:53 left in the second half when Olivia Knoepfle took a shot that banged off the goalpost to the right of Kalla and angled into the net. Seven minutes later, Corynn Grabau scored off a nice feed from Maria Stocke, and a little over a minute later Grabau tallied another goal with an assist from Kelsey Kallio.

"We know the goals are coming," Griess said. "These girls know how to create chances; it's just a matter of putting them away."

Andover (10-1, 8-0) claimed its ninth straight victory, thanks largely to a defense led by Gillespie, a senior who has started for the Huskies for three seasons.

"She communicates and directs the defense really well," Griess said of Gillespie. "She's super-positive, and she's really smart. And she's really skilled: ideally I'd like to have her on the outside, so she could move forward, but we need her in the middle so she plays there."

"It was good to score four. But keeping them at one — and shutting them out after they scored — was very pleasing," Griess said.

Gillespie added: "We stayed really composed, and our communication was good. I thought we did well." 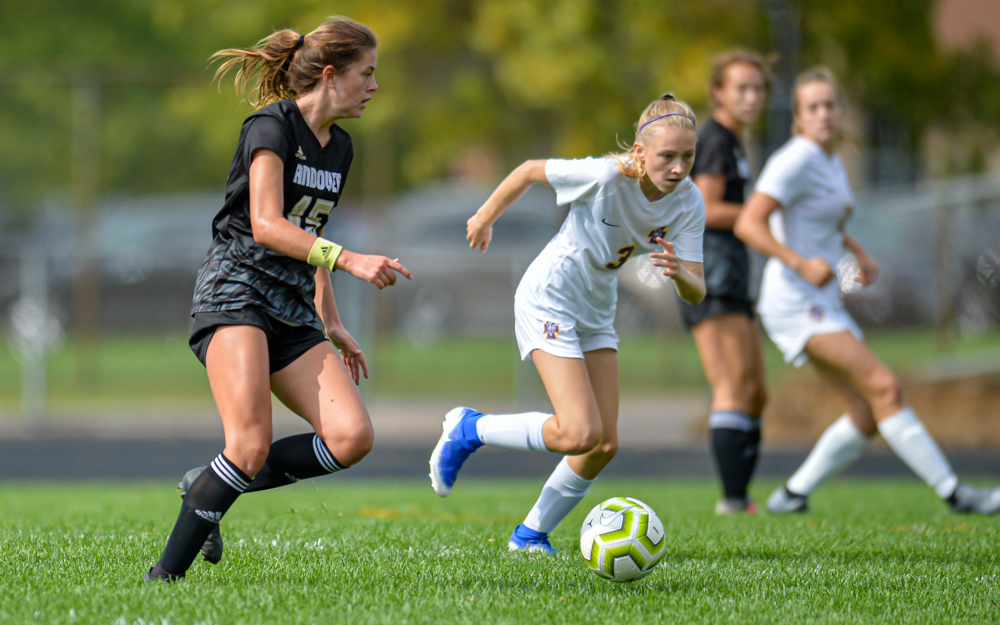 Tied 1-1 at halftime, Andover used a three-goal flurry over an eight-minute span of the second half to claim a 4-1 home victory over Cretin-Derham Hall Saturday.

Cretin-Derham Hall got a goal from Paige Peltier less than four minutes into the contest, but the Huskies, ranked No. 4 in the Class 2A state coaches' poll, tied the game less than a minute later when Anna Breffle set up Kennedy Sanders for her first goal this season.

Andover’s Olivia Knoepfle broke the tie with a goal at the 23:53 mark of the second half, and Corynn Grabau scored twice in a 90-second span eight minutes later to give the Huskies (10-1, 8-0) the lead for good.

With the win, the Huskies have won nine straight games. 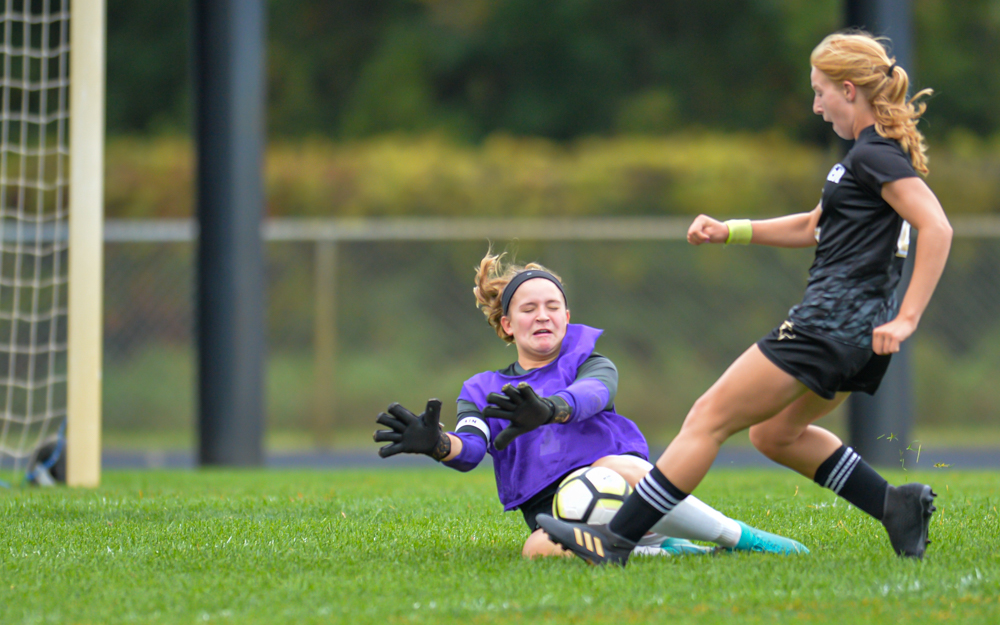 Cretin-Derham Hall goalkeeper Olivia Kalla stops Andover's Cedar Jorgenson in the first half of Saturday's game. The Raiders lost to the Huskies 4-1 in Andover. Photo by Earl J. Ebensteiner, SportsEngine