With a pair of late goals, Orono boys edge Waconia in league contest

With their win against their Wright County Conference rivals, the Spartans handed the Wildcats their first loss of the season. 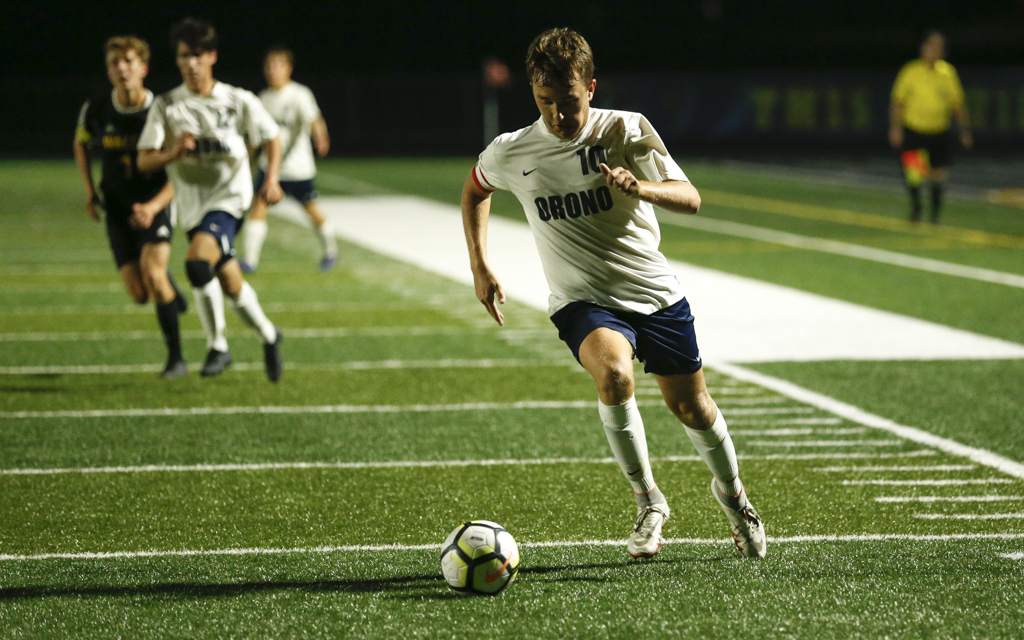 Orono's Reece Clifford (10) brings the ball in on a run leading to his second-half goal against Waconia Tuesday night. The Spartans defeated the Wildcats 2-0 in Waconia. Photo by Jeff Lawler, SportsEngine

It looked to be an overtime-bound scoreless affair between Orono and Waconia until the Spartans found sustained offense late, lifting them to a 2-0 victory over the Wildcats on Tuesday night in Waconia.

After a scoreless first half, the teams continued to trade physical and technical shots into the second half. It wasn’t until the game’s 64th minute when Spartans forward Reese Clifford got the ball near the 40-yard line and took off.

“I got it on the turn, and just took three massive touches and toe poked it to the top right corner,” Clifford said.

It was a goal that seemingly came from nowhere, but it ignited a run that Orono coach Derek Engler is fairly used to.

“We are a young team so we tend to be a momentum team, but when we can compose ourselves we contend to keep possession and put teams under a lot of pressure,” he said.

That momentum ballooned quickly. After a brief “team photo” celebration of Clifford’s goal, the Spartans, who are ranked No. 7 in the Class 1A coaches’ poll, were right back at it. Just five minutes later, a 2-on-1 break between midfielder Ben Summers and forward Ben Halloff formed, with Halloff finishing with a goal that extended Orono’s lead to 2-0.

With the late surge, the Spartans extended their winning streak to five games while handing Wright County Conference foe Waconia (7-1-0, 2-1-0) its first defeat of the season.

“We are starting to get better every game,” Engler said. “As we continue to grow, we feel we can do this throughout the season.”

But for Engler, the start to this season has been a bit of a surprise due to the lack of experience on the team.

“We have a team built with 60% sophomores,” Engler said. “I didn’t see this start at all. We were humbled early on, started 2-2 and I thought by the end of the year we would be a top-10 team.”

Clifford, a senior, said his class has tried to help with the younger players.

“Our senior leaders have really come together and just taught the basic stuff to the sophomores,” he said. “We try to keep it calm and collected on the field, and with younger kids it gets frantic at times.”

The forward has noticed the difference in attitude and composure in comparison to last year, saying the team is playing less frantic than they had in the past.

It’s safe to say this Orono (7-2-0, 2-1-0) team has exceeded Engler’s expectations. And this win over No. 6-1A Waconia, the team that ended the Spartans’ season last year in the Class 1A, Section 6 tournament, shows the Spartans can deal some damage in October.

“Players didn’t need any help from the coaches to get hyped for this one and it showed. This was our most complete game of the season,” Engler said. 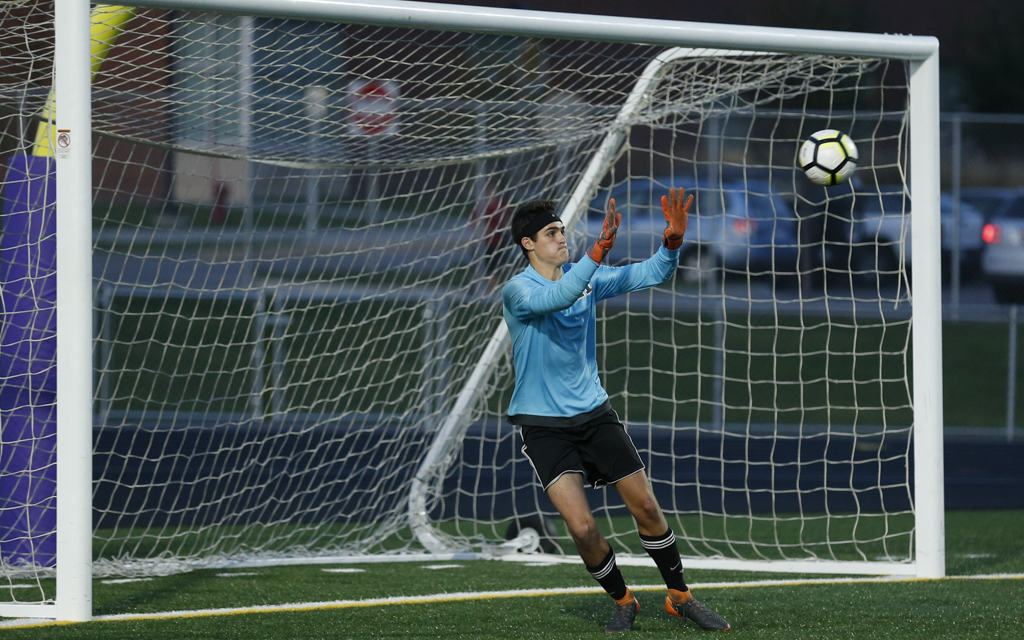 Orono goalkeeper Michael Hughes (21) moves across the goal to make a save on a Waconia set play in the first half Tuesday night. Hughes allowed no goals in the Spartans’ 2-0 victory over the Wildcats. Photo by Jeff Lawler, SportsEngine

Behind a strong second-half effort, Orono extended its winning streak to five games by taking down Wright County Conference foe Waconia 2-0 on Tuesday night in Waconia.

Through the first half, and about midway through the second half, it was a back-and-forth match until the Spartans, ranked No. 7 in the Class 1A coaches’ poll, found their stride late. Forward Reece Clifford ignited Orono’s run, taking off from near midfield before finding the top corner of the net to give the Spartans a 1-0 lead in the 64th minute.

Orono (7-2-0, 3-0-0) built on its momentum five minutes later with an impressive 2-on-1 break from Ben Halloff and Ben Summers. The break finished with a goal from Halloff, putting the game out of reach.

Waconia (7-1-0, 2-1-0) suffered its first loss of the season to a team it eliminated in last year’s Class 1A, Section 6 tournament. Nate Dean recorded three saves for the No. 6-1A Wildcats. 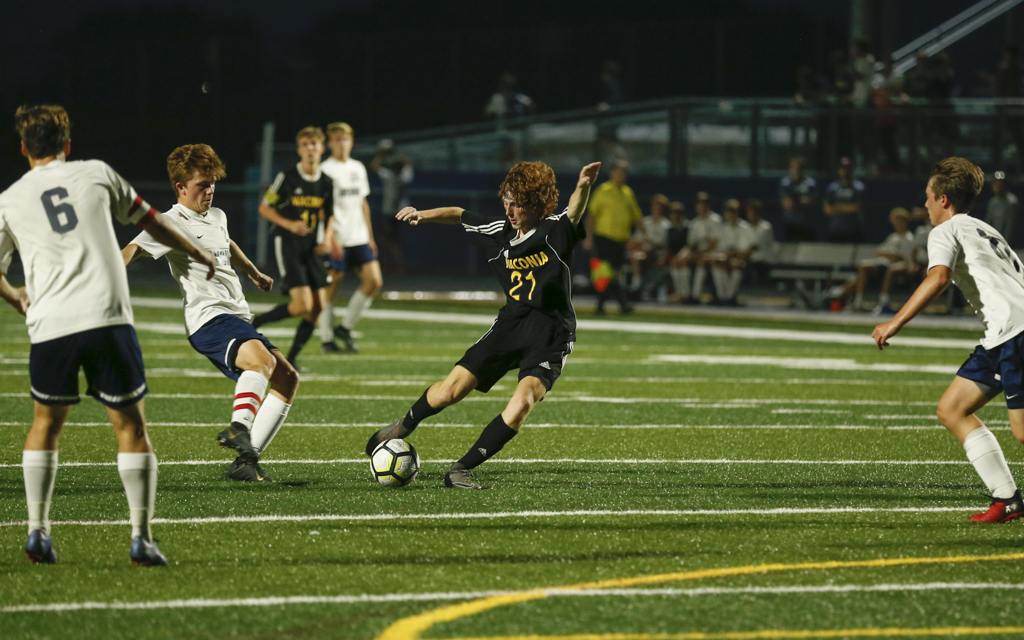 Waconia's Michael Bortz gets a shot off as three Orono defenders converge on the play. The Wildcats fell to the Spartans 2-0 at Waconia High School Tuesday night. Photo by Jeff Lawler, SportsEngine