Julia Schorn scored early in the second half, breaking a scoreless tie and giving the Irish their first victory over the Wildcats for the first time since 2016. 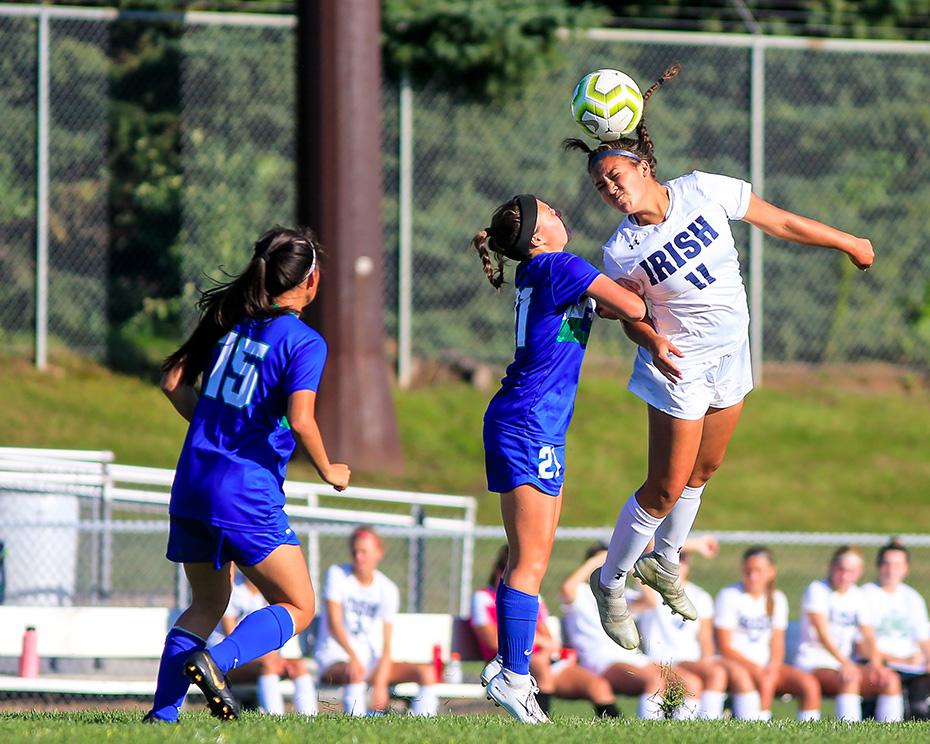 Rosemount saw its last two seasons come to an end at the hands of Eagan in the Class 2A, Section 3 championship, with the Irish not beating the Wildcats since 2016.

But on Tuesday, Rosemount ended up on the winning side of this rivalry, securing a 1-0 road victory over Eagan in a South Suburban Conference matchup at Wildcat Stadium.

“This is a big win for us,” Irish coach Gretchen Stramel said. “They are always one of the top teams in the conference, and in the past four years we have faced them in the section finals.”

Stramel said the win gives her team, which has won seven consecutive games, the psychological edge and gives them hope for the remainder of the season.

“For our girls, it’s a good confidence booster and it helps them realize how much talent they actually have,” Stramel said.

It was a defensive battle throughout, and for a minute, it looked like it was going to be a repeat of last year’s regular-season contest which ended in a 0-0 tie.

But late in the scoreless first half, Rosemount — ranked No. 7 in the Class 2A coaches’ poll — gained momentum, controlled the pace of play and hammered numerous shots toward the goal.

It was more the same in the second half, but the deciding goal came early as the No. 4-2A Wildcats (5-1-1, 1-1-0) were yellow carded six minutes in, awarding the Irish (7-1-0, 2-0-0) a free kick. Just five seconds later, junior Julia Schorn scored when her shot bounced off the hands of Wildcats goalie Erica Collins and rolled into the back corner of the net. 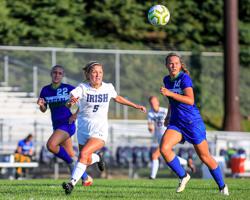 The Irish the held the 1-0 advantage the rest of the game, giving them an important victory — both in the league standings and for the playoffs.

“This win means a lot. All the games (against Eagan) have always been close, we’ve had a lot of big games where they’ve beaten us,” Schorn said.

For most of the season, Eagan’s been able to beat opponents with speed. The Wildcats outscored their last two opponents — Apple Valley and Owatonna — 14-0, but Rosemount used its shutdown speed to the ball to stay with the Wildcats.

She also said her team took advantage of sideline play.

“We have found we’re most effective playing the ball down the sidelines, and then working it in from there and it worked for us,” Stramel said.

“We both were able to create some chances and it was only 1-0,” she said.

Lenz is in her first season as head coach after taking over for Bulut ‘Turk’ Ozturk, who led the Wildcats to state titles in 2014, 2015 and 2017, and she said the difference in the match was set pieces.

Despite the loss of Tuesday’s match and the spring graduation of 2018 Ms. Soccer Megan Plaschko, who was goalkeeper for the Wildcats for four years, Eagan is off to another successful start, thanks to their two new goalkeepers — seniors Karlie Vrieze and Erica Collins — who are splitting time after watching and learning from Plaschko.

“I think having somebody to look up to and have a role model like Megan, they’ve learned a lot from seeing them play. Through their experiences, they’re ready,” Lenz said. 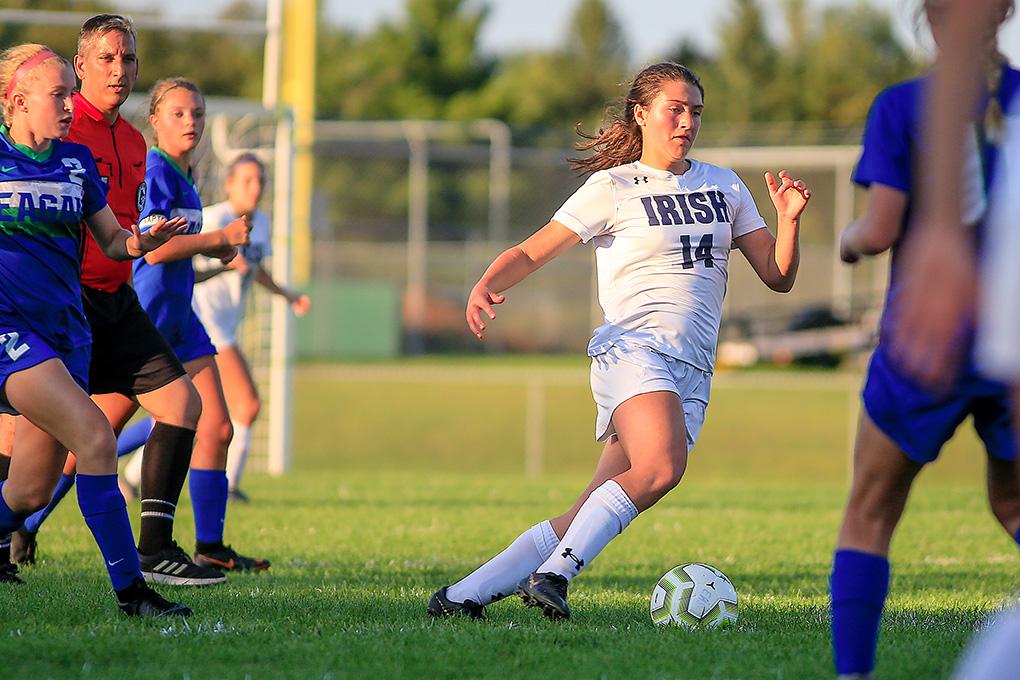 Rosemount's Julia Schorn (14) dribbled through traffic into the Eagan zone. Schorn scored the game's only goal on a free kick early in the second half. Photo by Mark Hvidsten, SportsEngine

In a rematch of last year’s Class 2A, Section 3 final, Rosemount picked up its seventh straight win in a 1-0 victory over South Suburban Conference rival Eagan on Tuesday night at Wildcat Stadium in Eagan.

After a scoreless first half, junior Julia Schorn scored the game-winning goal for the Irish, who are ranked No. 7 in the Class 2A coaches’ poll, off a free kick in the 46th minute.

The goal kickstarted a dominant stretch for the Irish, who didn’t allow a shot on goal in the second half, allowing Rosemount (7-1-0, 2-0-0) to dictate play.

After outscoring its opponents by a combined 14-0 in its two previous games entering Tuesday, No. 4-2A Eagan suffered its first loss of the season. Wildcats keepers Erica Collins and Karlie Vrieze combined for eight saves. 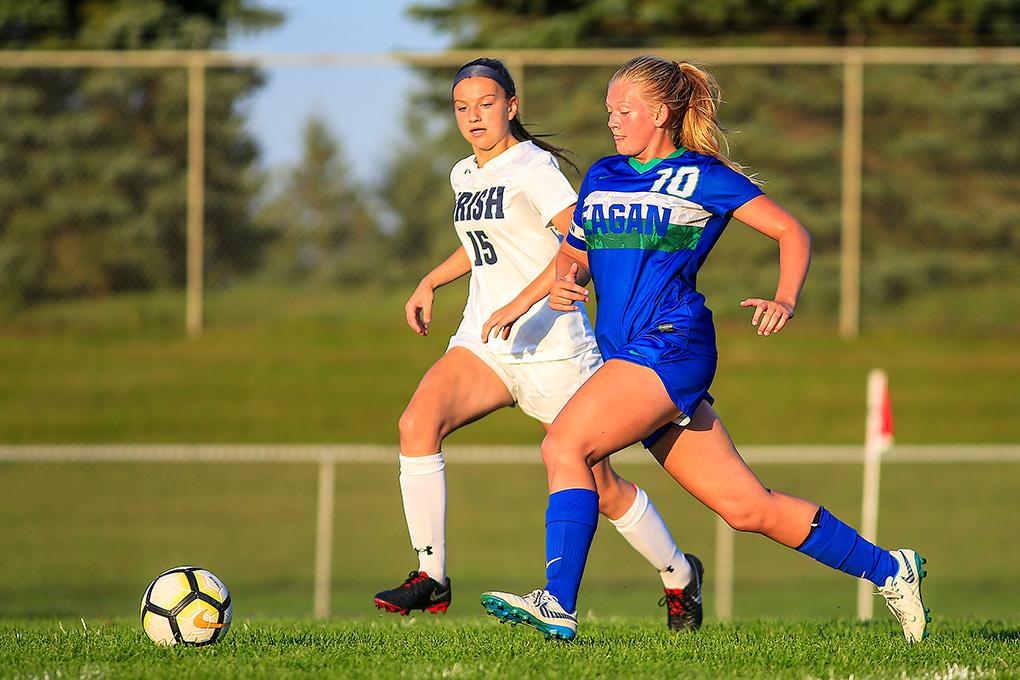 Eagan's Emily Cronkhite (10) tried to get past Rosemount defender Olivia Bohl late in the game. Photo by Mark Hvidsten, SportsEngine