Nicholas Riley scored one of two first-half goals to help the Orioles defeat the Eagles and open the season with seven consecutive victories. 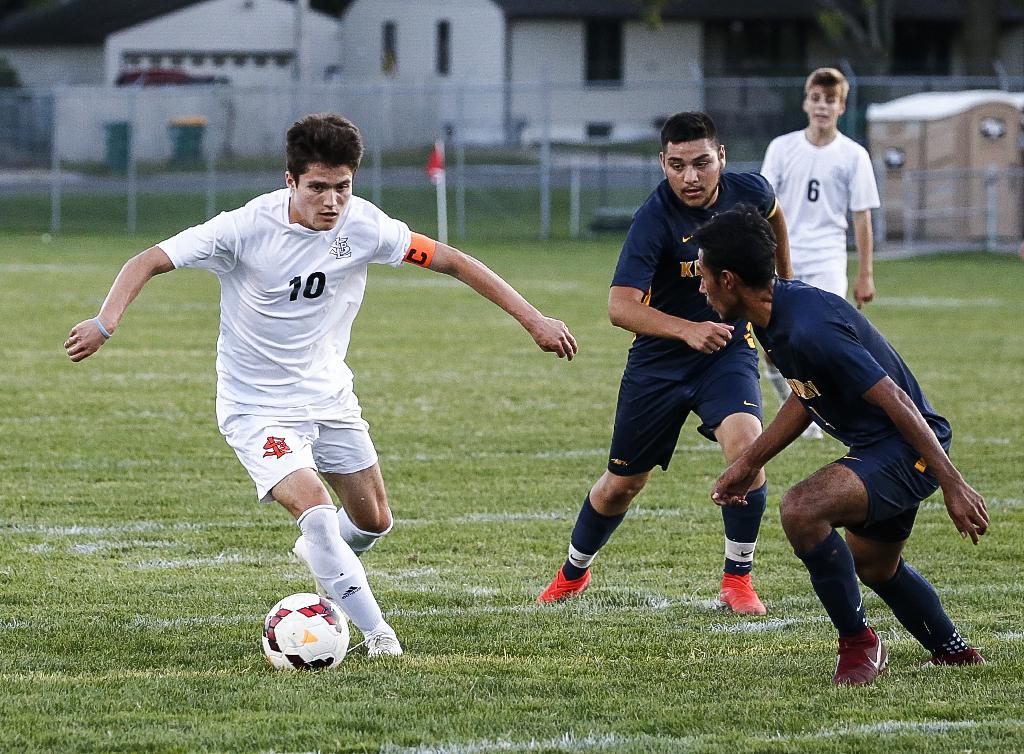 St. Louis Park's Nicholas Riley (10) looks to move the ball past a pair of Bloomington Kennedy defenders. Riley scored first for the Orioles in a 2-1 win at Bloomington Stadium. Photo by Cheryl A. Myers, SportsEngine

Two teams went into the Tuesday night’s tilt with unbeaten records, but it is St. Louis Park that’s had a chip on its shoulder this season.

The Orioles lost consecutive Class 2A, Section 6 championship matches in overtime to Wayzata, in 2017 and 2018, which has left a mark on the team.

Those defeats have fueled St. Louis Park’s roster with the motivation needed to push to the next level. So far, that effort has helped extend the Orioles’ winning streak to seven games after knocking off Metro West Conference and Section 6 foe Bloomington Kennedy 2-1 on Tuesday night in Bloomington.

Orioles midfielder Nicholas Riley, who is in his fifth season with the varsity, has become a team leader. The senior captain’s mindset has helped build chemistry among the team, which has helped keep the squad focused on its main goal this year: winning the section tourney to earn a Class 2A state tournament berth.

“We all stay humble and we're always hungry,” Riley said. “We’re really close with each other so we can hold each other accountable.” 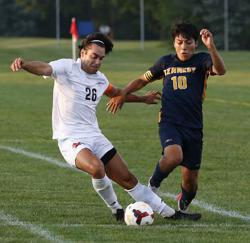 Keeping things fun this season has helped keep St. Louis Park (7-0-0, 2-0-0) focused, said co-assistant coach Pat Hartman, who is helping helm the Orioles while head coach William Alvarado is temporarily out of the country for a family matter. The captains have also working hard, keeping the Orioles, ranked No. 2 in the Class 2A coaches’ poll, sharp to date, Hartman added.

Hartman said Riley is a versatile player who gives the team different options for how to utilize his skill set. However, it’s Riley's character displayed throughout his varsity career that’s impressed Hartman the most.

“He’s very coachable and he’s very receptive, so when we do little changes, he always gets right on it and responds really well to it,” Hartman said.

Riley’s grit is contagious, and he’s determined to reach the state tournament in his final season with the team. The Orioles feel that urgency.

Riley realizes how difficult it is to get out of his section. He challenges his teammates to improve every game so that they’re ready for when their next section tournament begins.

In the meantime, Riley’s become more comfortable taking on new challenges and responsibilities. On Tuesday, it was after teammate Bennett Kouame drew a penalty kick 13 minutes into the game. Riley stepped up and delivered, talking the shot with no doubt he’d score.

“Every year I have to take on a bigger role and help these guys,” Riley said. “It’s my fifth year on the team, so everything I’ve learned these last four years, I’m kind of putting it in place now.”

Kennedy (3-1-2, 0-1-0), meanwhile, looks to get back to building its own momentum after recording its first lost of the season. After all, these teams could meet again in the section playoffs. The Orioles beat the Eagles 2-1 in the semifinals a year ago. 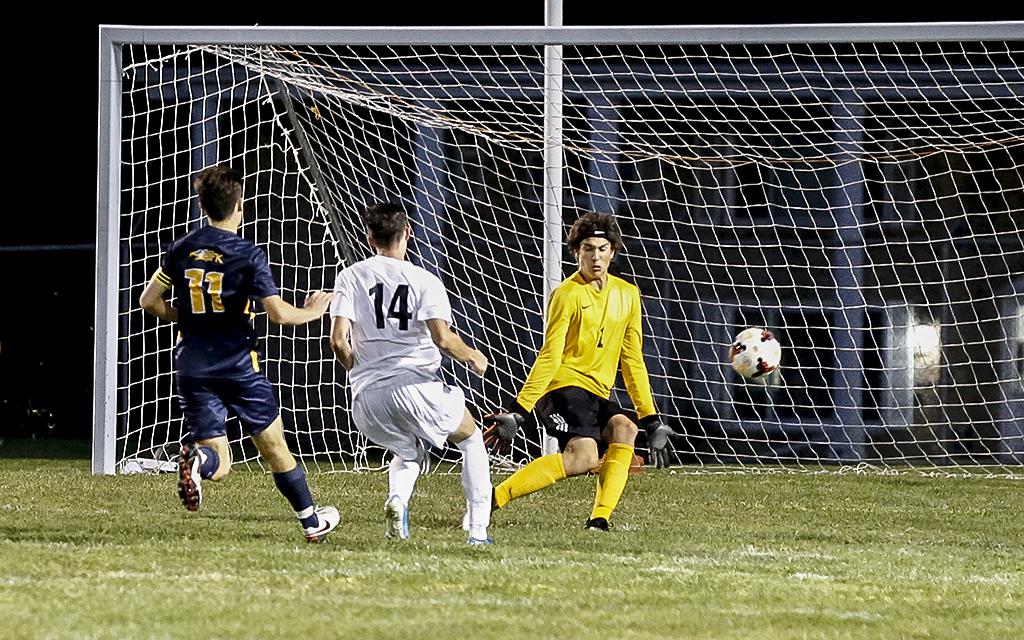 Daniel Lainsbury Jr. (14) scored late in the first half to give St. Louis Park a two-goal lead going into halftime. The Orioles held on in the second half to defeat the Eagles 2-1 and remain unbeaten this season. Photo by Cheryl A. Myers, SportsEngine

Bennett Kouame got the Orioles, ranked No. 2 in the Class 2A coaches’ poll, rolling by drawing a penalty 13 minutes into the match. Nicholas Riley converted the spot kick to give St. Louis Park (7-0-0, 2-0-0) a 1-0 advantage.

Moments later, Orioles goalie Luis Benitez Matias saw a shot going up and around him to force him into making a diving save to hold the 1-0 lead. He had three saves before getting subbed for Beau Finley in the second half.

Daniel Lainsbury Jr. headed a ball played by Alexander Ruiz-Shimada in the last minute of the opening half to extend St. Louis Park’s lead to 2-0 going into the break.

In the second half, Eagles forward Alan Conteh capitalized with an open shot in the box to get Kennedy (3-1-2, 0-1-0) on the scoreboard. Eagles goalie Carter Lanadale kept his team in the game, stopping six shots in the second half to finish with seven saves. 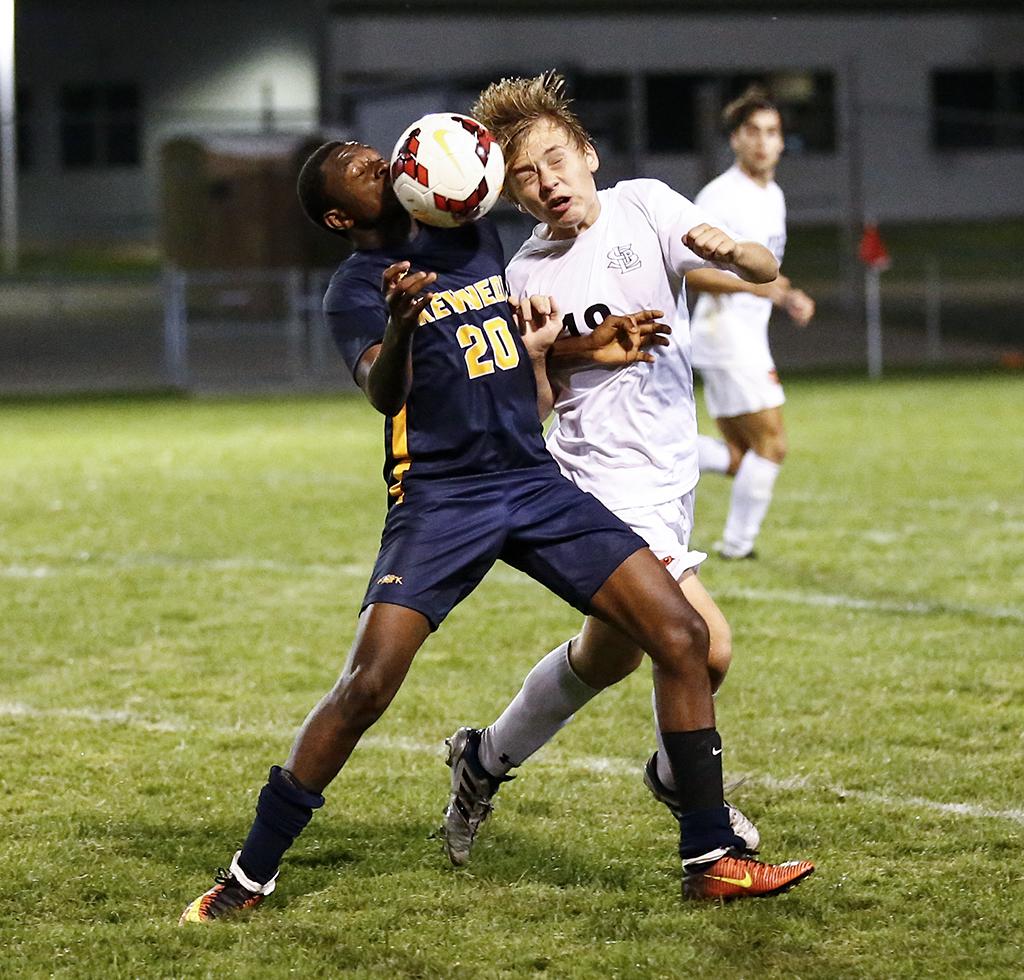 Alan Conteh (20) scored Bloomington Kennedy's only goal of the contest. The Eagles were handed their first loss of the season by the Orioles on Tuesday night. Photo by Cheryl A. Myers, SportsEngine