Whether it’s coaches, rules or sections, change has come to high school soccer for the 2019 season. Here are the details. 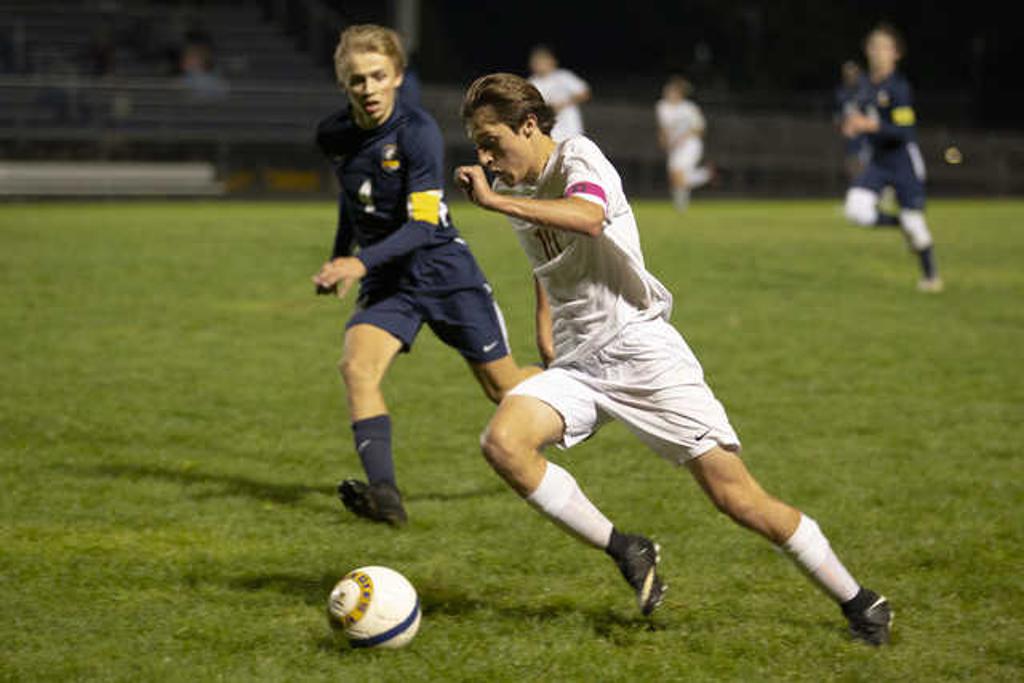 If Centennial and co-captain Demetrius Bernardy-Nelson are going back to the Class 2A boys’ soccer tournament, it will be as the Section 7 champion, rather than Section 5. Photo: Jeff Lawler • SportsEngine

The National Federation of High School Associations didn’t mince words. Coaches whose teams are leading in games can no longer use “a time-wasting ploy” of making multiple substitutions. Beginning this year, “the clock shall be stopped when a substitute by the team in the lead is beckoned onto the field in the final five minutes of the second period.”

Wayzata boys’ coach Dominic Duenas approves the change. He just isn’t sure how many local coaches have been guilty.

“I don’t think it’s a tactic that is overused,” he said. “I haven’t seen a revolving door to stall, at least not in the Lake Conference.”

On the girls’ side, Class 2A, Section 5 won’t be decided by Centennial vs. Maple Grove for a fifth consecutive season. Both teams have moved, Centennial to Section 7 and the Crimson to Section 8.

Both teams, who meet Tuesday, have already faced teams they are likely to see in the playoffs. Andover, ranked No. 5 in the preseason coaches poll, defeated No. 9 Centennial 6-2 on Aug. 27. And No. 4 Maple Grove dispatched St. Michael-Albertville 3-0 and Rogers 4-0.

The Centennial boys’ team made its state tournament debut last season and lost to Duluth East in the first round. This time around, the schools could meet in the Section 7 playoffs.

Bulut Ozturk went from simultaneously coaching the boys’ and girls’ programs at Eagan for one season to coaching neither one. Ozturk left Eagan, where he built the girls’ program into a state power, for the University of Tennessee women’s program. He previously coached two years in NCAA Division III at Augsburg and Hamline and one in Division II at Concordia (St. Paul). Taking over the Wildcats are Tim Foley (boys) and Shari Lenz (girls).

The Edina boys, ranked No. 1 in the Week 1 coaches’ poll, gets ample opportunities to defend the throne. The Hornets face No. 5 Wayzata and No. 2 Minnetonka two times each in Lake Conference play. No. 3 Eastview meets No. 6 Minneapolis Washburn on Sept. 7 in a nonconference match. The Millers also play No. 7 St. Louis Park and No. 8 East Ridge.

On the girls’ side, defending Class 1A champion Mahtomedi is playing a 2A-heavy schedule. But the Zephyrs, ranked No. 1 in the coaches’ poll, see two fellow small-school powers in No. 3 Benilde-St. Margaret’s on Sept. 14 and No. 3 Hill-Murray on Sept. 24.

Reigning 2A champion Minnetonka holds the No. 2 spot in the coaches’ poll behind Wayzata. They play twice this season. Two additional meetings with No. 4 Edina and No. 9 Eden Prairie ensure that the Lake Conference champion will be as tested as the eventual state champion.